This map is from the Immigration Portal - their description follows:
The map above reflects the number of donations received by possibly the largest anti-immigration organization in its 2006 year-end fundraising campaign (source: NumbersUSA). We observe two points from this map (the map represents House
Districts, hence it is controlled for population). Firstly, the
map shows that anti-immigration sentiment is not prevalent across the country but is regionalized, with the West and Southwest more anti-immigrant (red, orange, and yellow shaded areas) and the East, Midwest, and most of the South more pro-immigrant (gray, purple, green, and blue shaded areas). Perhaps because of the
fact that the Southwest is a hotbed of the anti-immigrationists, prominent politicians of that area (Gov. Schwarzennegger, Sen.McCain, and Rep. Flake) support legalization. They grasp that the
problem is not immigrants but their legal status. Secondly, the red parts in the map correlate well with areas of recent Mexican immigration. To the extent that these immigrants assimilate, we should expect this map to cool in the future. On the other hand, if tensions between recent migrants and natives remain, we should expect the cooler areas to heat up as immigration to these areas increases in the future.
Posted by Dug at 11:11 AM

The Philadelphia Inquirer published a really good map showing 2006 murders in the city. If you click the map below you can go to the interactive map. Click on any dot to get details about the crime - victim, race, time , weapon, etc. You can also use these as filters to see only daytime murders or murders by "hand". Keep in mind that this a an entire year 's worth of data and in most of the city murder is really not that common an occurrence. Really we have lots of nice neighborhoods! I'm serious! 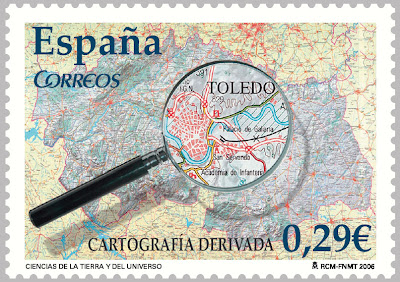 This past summer the Spanish Postal Agency, Correos issued a really nice stamp showing a map of the city and region around Toledo. It's part of their "Sciences and the Earth" series. I don't know if there are other maps planned. Stay tuned.
Posted by Dug at 11:11 AM

This map was originally published for the Philadelphia Daily News to show off our awful luck in the realm of professional sports. The map shows cities with their number of championships won since July, 1983, right after the Sixers won our last major sports title. The original map was interactive and you could get the teams that won by clicking on each city, however this map has been taken off their web site.
As many readers have pointed out we are not the only city crying in our beer. 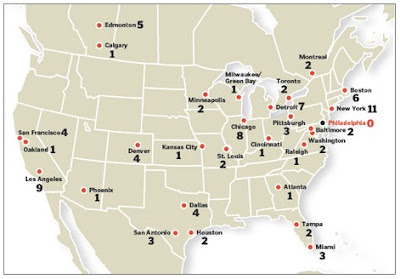