I don't even remember where I dug this one up but it's the classic problem of what poor neighborhood to dump the nudey bars on. You can't wish them away so you have to put them somewhere. In Washington DC they are looking at a location by Gallaudet University (they may be deaf but they're not blind!) and also right near a playground though those two things would theoretically be in operation at different times. Since the map doesn't give you much surrounding detail all you need to know is it's a very short drive from Congress so your reps will have easy access. 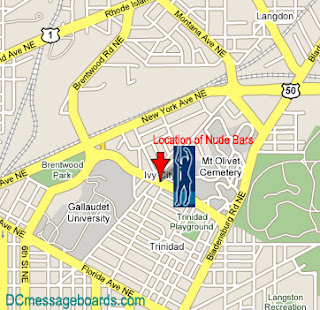 Here's the text from whatever web site I originally grabbed it:

But where Graham sees helping some former business owners, he said he also anticipates a possible "not in my backyard" style backlash from residents in the areas of Ward 5, into which the businesses plan to move.

Graham's Committee on Public Works and the Environment is scheduled to mark up and vote on a bill that would allow for the one-time relocation of the businesses.

The problem is that lighter commercial zones often act as a buffer between heavier commercial and residential areas, officials in Graham's office said.

The businesses are unable to relocate near the stadium because it was rezoned and other areas of the city that would allow them, including downtown, are too expensive.
Posted by Dug at 11:11 AM

This is a map poem by Howard Horowitz called "Manhattan". It originally appeared in the Op-Art section of the New York Times. His art can be found here. Those of you over in Oregon might enjoy his other offering. Also, there's an Idaho poem so something for everyone!
Posted by Dug at 11:11 AM

One of my pet peeves is when worthwhile, timely information gets put on the web and then is never updated. This example is cited as a "recent map" from a company that works with newspapers to put maps on their web pages. The map shows "Rummage Sales"* in the "Siouxland" for the weekend of April 14th - note that the date at the top is today. This is/was useful information and if they kept it up to date could be still.** If not take it off or the residents of Ascot/Broadmoor should be expecting visitors this weekend, sale or not.

** I can think of several other ways they could improve this site but I've already gone on for too long here.
Posted by Dug at 11:11 AM

Sorry - I'm a day late on this one but you can save it for next year and start planning now. This is a map of the prime viewing sites for the Washington DC Fireworks. If they use this same site every year then save it for future reference.