Have I mentioned that I don't really care for google (or bing or yahoo) maps? Sure they serve certain purposes very well and I even use them at work when they fit the bill. However, when directing me to your business I prefer a customized map. Here are some examples.

A map to the Kipu Ranch on Kauai where you can enjoy scenic beauty by ramming through it on an ATV.

Directions to Camp del Oro in Nevada City, California. You will probably get lost. 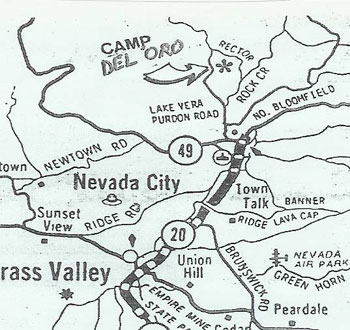 The Book Loft of German Village - Columbus, Ohio. Absolutely not to scale but emphasizing the important details - and you can't do that in google! Pasquia Regional Park in Saskatchewan- looks like it was drawn by a kid with cartographic skills. 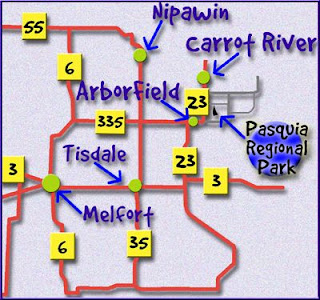 A very red map of the locations of the Big R Stores in the Northwestern US. I love how the topography ends at the Idaho border! 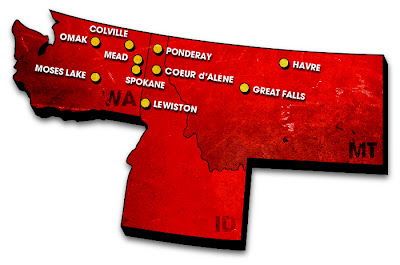 Here's a map to The Strand - a development in Datarang Sunway, Malaysia. I got the image from Three Meals of Goodness, a Malaysian dining blog. I like the exaggerated earth curvature, and the Ikea.

A Six Pack of Maps

Spring beer season is here. If you look at the bottom of your six pack you may find a nice map directing you to the brewery. Just be careful not to turn it over when it's full of bottles. I like these maps because they are usually hand drawn (or in a hand drawn style) making for creative alternatives to the googly, bingy maps we've become accustomed to. Of course, most brewing companies use a google type map on their web sites so I had to scan some six packs.

Here are six examples from beers that are commonly available here in the Northeastern USA. I have a few others from farther afield that will make for a future post. This is not meant as an endorsement of these beers. They are just the ones I've bought in six packs recently and some of them were better than others. 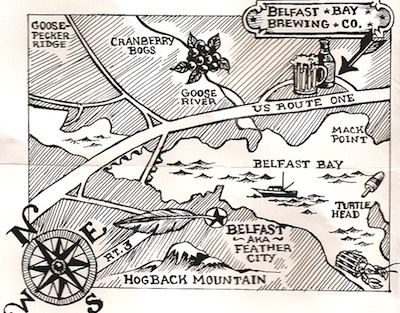 Magic Hat in South Burlington, Vermont. I've actually been on this tour! 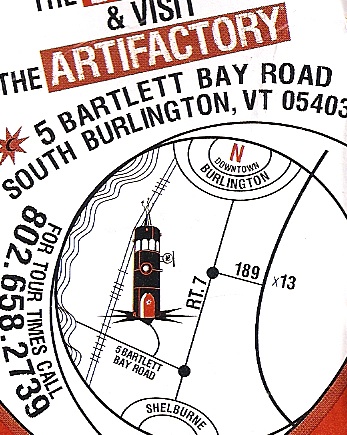 Victory - Downingtown, PA. A highly schematic map where 202 and 30 are really important while 476 and Route 1 don't make the cut. 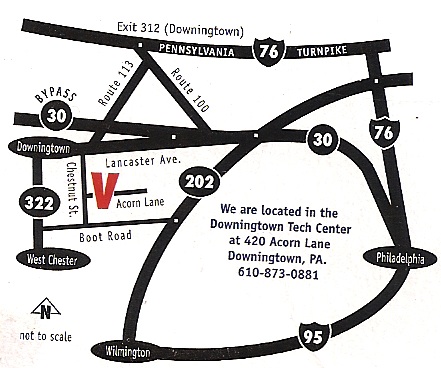 While in Pennsylvania stop by Troegs - look for a beer bottle by the railroad tracks. They're moving to Hershey* though so this map may not help you anymore. 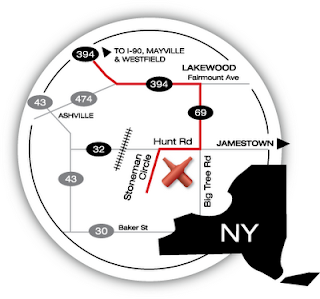 Finally we head back eastwards for a colorful map from the Ithaca Beer Company. 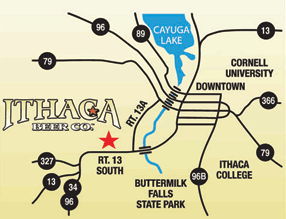 If you find a nice map on the bottom of your six pack send it over and maybe I'll put it in a future post.

*UPDATE - since I began collecting these Troeg's has in fact moved so I had to buy another six pack of their beer. Here's the map to their new digs with I-81's westward sweep greatly exaggerated for artistic effect - try doing that on a google map!

I've had a few inquiries about mapping the NCAA tournament. Bill's Sports Maps is still the best resource for figuring out where the heck Murray State is. Here's a piece of his big map. Click for the full page. 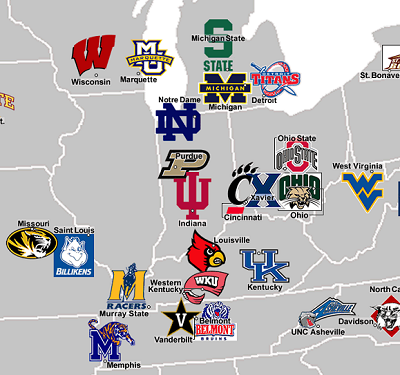 I'd love to give the women equal time but Bill didn't make a map of their tournament and I can't find one elsewhere. With Bill out on injured reserve it's unlikely we'll see one. Maybe if I strategically wait until the final four I can find the time to make my own. Go Great Danes!

Location: somewhere near Indiana or Kentucky
Email ThisBlogThis!Share to TwitterShare to FacebookShare to Pinterest

Map of the Week-Burning Edition 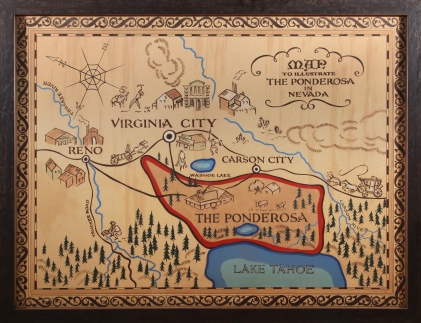 This map is on permanent display at the Autry National Center in Los Angeles. Assuming that north is supposed to be up, the map was drawn incorrectly. When Ayres showed the map to series creator David Dortort he said "I love it, but your directions are wrong." Ayres fixed this by adding a compass with north pointing to the left and up. If only all cartographic problems could be solved this way.

Here's the map in action

For your viewing pleasure, here is the intro so you can watch it burn!

Thanks to my wife for the post suggestion and title.
Posted by Dug at 6:50 AM 1 comments

Eric Fischer's Flickr photostream has lots of interesting maps. He has put together The Geotagger's World Atlas, a series of maps showing the locations of geotagged images from Flickr and Picasa. These maps (all covering 15 square miles) reveal the contrasting patterns of world cities from the highly centralized European cities such as Amsterdam, to the sprawling multinodal Los Angeles. 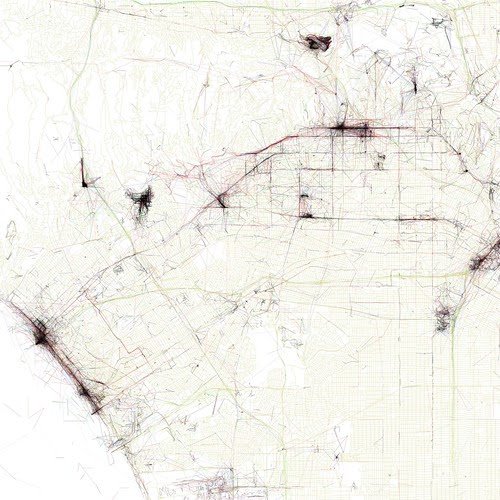 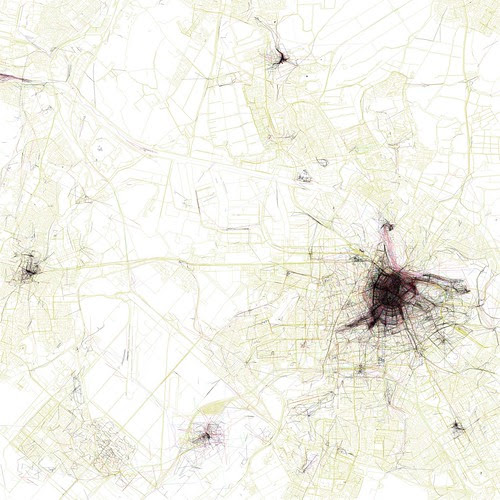 To add color and interest, he also has a set called Locals and Tourists with color coded dots - blue for locals red for tourists and yellow for not certain. Most cities have the red dots in the central areas and clustered at beaches, sports arenas and amusement parks. San Francisco (his hometown?) has a nice concentration of red all along the Golden Gate Bridge and red clusters in various tourist destinations, including Alcatraz. 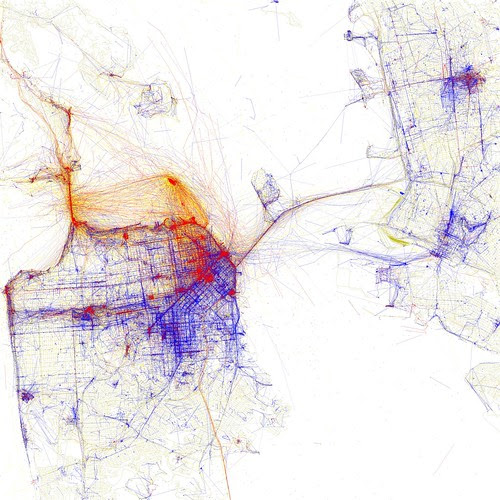 The lines in these maps connect pictures that were taken in a series.

Paris shows an east-west split. The red area at the lower left edge is probably Versailles. 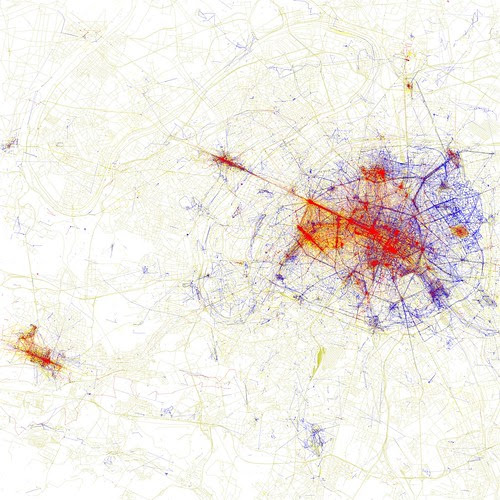 The Asian cities show some surprisingly spread out settlement patterns. Here is Taipei. 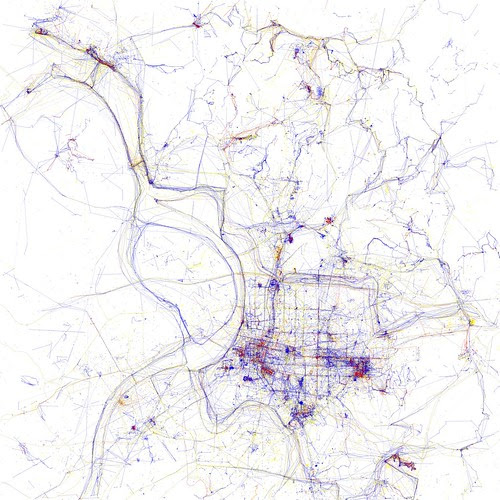 I'll finish off with Tokyo and its nice, artistic pattern. 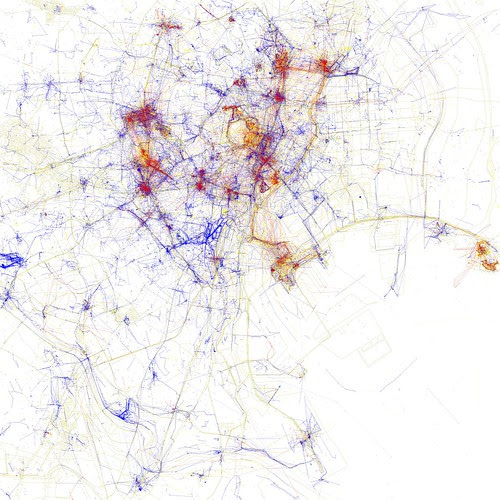