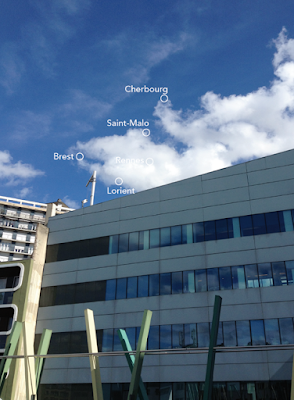 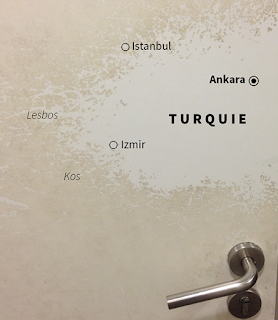 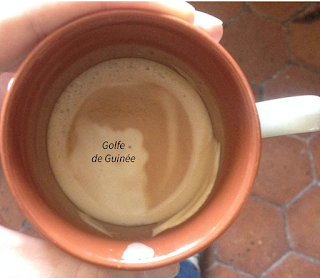 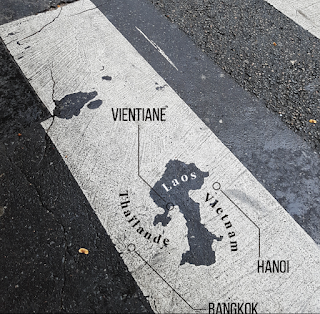 and salad greens - this one looks pre-arranged.

Even fantasy worlds-here's Westeros, from a gap in the trees. 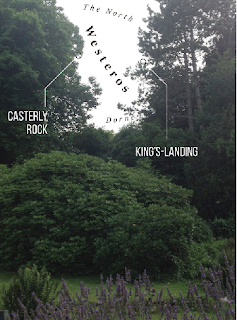 Scroll thru the collection here 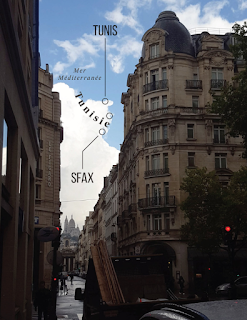 I love the satisfying sensation of popping bubble wrap. Now you can pop with purpose - to show your travels through the world, or at least through Budapest. 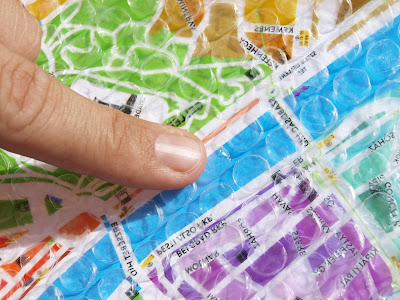 Sator Space, designer of the previously featured Egg Map, is back with Pop Map. 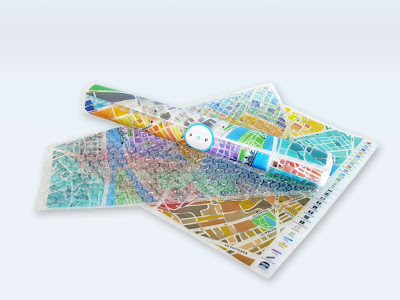 From their press release:


PopMap is not only an unconventional, playful tourist guide, it also serves as a great tool to release nervous energy while exploring the world. Several studies have shown the stress-relieving effect of popping bubble wraps and the way it relaxes people. Plus Bubble Wrap Appreciation Day is a REAL thing, celebrated around the world on the last Monday of January. So pop through the sights with your therapeutic map and leave not a bubble behind.

The map is nice and colorful. Here's a close up view. 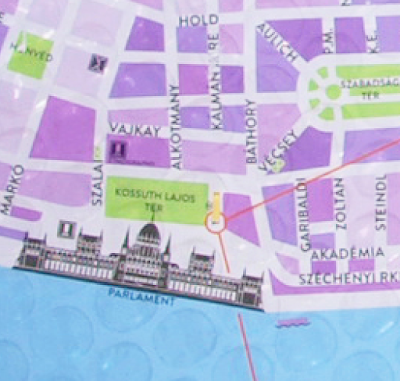 and a view from underneath. 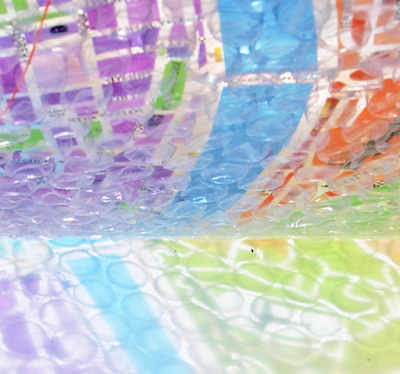 Here's a view showing part of the legend. 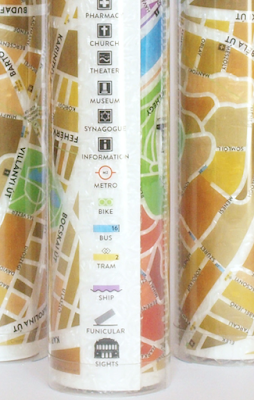 For now, they only have Budapest in stock but there other cities that will be pop-able soon. 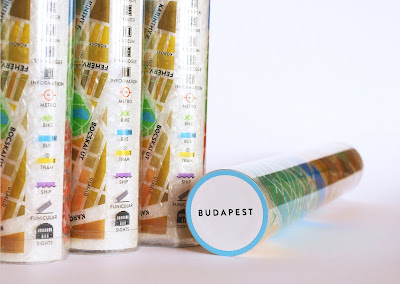 For more info see their product page, to puchase see their web shop. The shop also features other cool products like the Metroshka, based on the Russian matryoshka (nesting dolls) -  nesting transit. 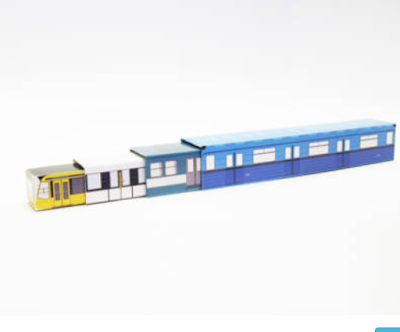 If you're Hungarian and want to read it in your native language go here.

In a recent article in Places Journal, geographer Richard Campanella used Google's Street View images to document the rebounding population of New Orleans after Hurricane Katrina devastated the city. He created a grid throughout the city and counted the number of people visible on Google's images in 2007 and 2016.

The legends on these maps are hard to read at this size but darker colors means more - in this case people. Here are bicycles. 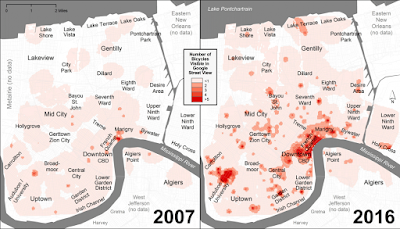 What these maps show is not so much population as "public space occupancy"-people are walking down the street, sitting on their front steps, sitting at outdoor parks and cafes, and riding bikes. The percentage increases here are quite a bit higher than the population and tourist increases in the city. This suggests a more vibrant city where improvements to infrastructure have encouraged more people to occupy the public space. Campanella takes care to point out that not all of this occupation of public space is from happy gentrifiers. There is a cost in the displacement of:


"lower-income residents-who, we should remember, occupied streetscapes in their own way, with elders on stoops and children playing in the streets. (Rare is the sight of either in the French Quarter today.) It’s also important to note that some of the patterns in these maps do not represent people contentedly occupying the public space, but rather relegated there."

A by product of gentrification is an increase in graffiti, as seen proliferating in the same neighborhoods. 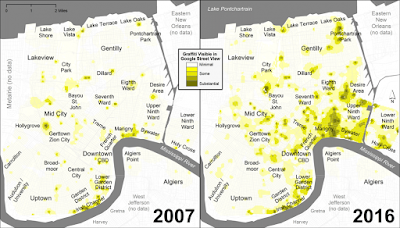 The article suggests that public space occupancy is an important and overlooked consideration in urban planning. It also shows that Street View data, while very imperfect can and should be used, possibly with automated processes to enumerate these phenomena.

100 years ago Halifax, Nova Scotia suffered a horrific explosion that killed about 2,000 people, injured many more and destroyed much of the city. Windows 50 miles away were shattered. 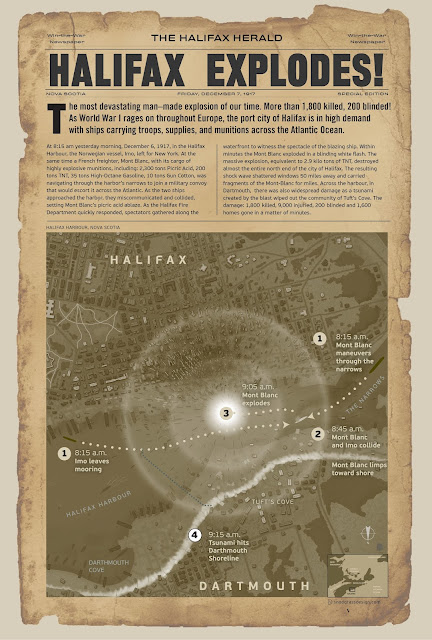 Two ships collided, one carrying explosives that were meant to go to France during World War I. The ship with the explosives caught fire and drifted towards the city. As people watched the burning ship it exploded, instantly killing almost 2,000 people. The explosion resulted in a Tsumani that killed even more people and wiped out a Mi'qmak First Nation community in Dartmouth.

The Halifax Herald put together this remarkable graphic showing the destroyed buildings in great detail, UPDATE: No it didn't - see below 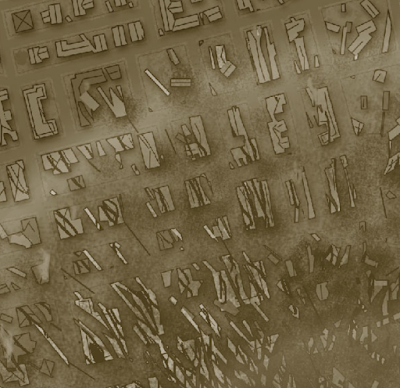 as well as a timeline of events.

Pretty amazing to have produced this map on such notice and under such trying conditions - that was my original text. It turns out this was a recreation by Snodgrass Design. Fooled again!

More on the explosion can be found on Wikipedia.
Posted by Dug at 11:25 AM 0 comments

Cartographers have been trying to figure out how to best show election maps for a long time. Here in the United States, the typical county map can badly represent vote totals when large counties with tiny populations dominate the map. In 1860's Paris, a cartographer named Louis Montigny used this interesting approach to map the city's neighborhoods.

A square centimeter represents 1000 votes, with the political parties color coded. This clearly shows who won each neighborhood but also gives a great picture of how well each party performed. Yellow represents the governing party of Napoleon III, while opposition parties are colored blue, pink and red. Socialists are orange. Viewing the entire city, there are some pretty clear patterns of strength and weaknesses of the different parties. 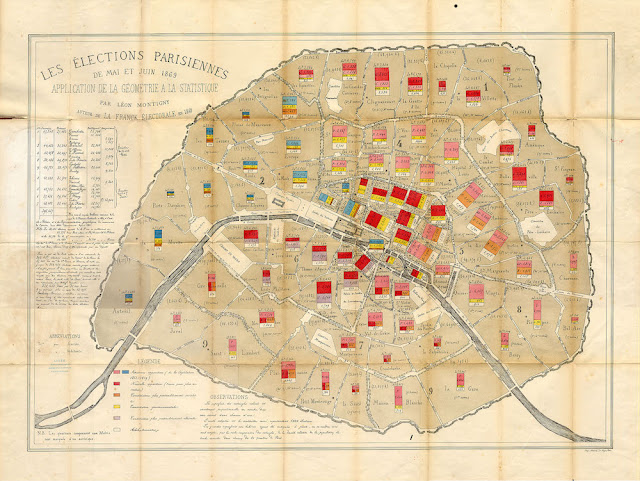 As you approach the city's edge, the larger, less populated neighborhoods get the appropriate level of visual prominence. 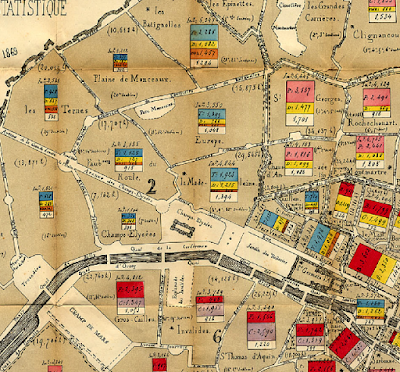 I discovered this map on Cartographia, a blog has been inactive for many years. The blog post illustrates the historical importance of this map as it shows the beginning of the decline of Napoleon III's empire. His party was clearly losing popular support as shown by the absence of yellow on much of this map. Shortly after this election he began a war with Prussia in order to boost his legitimacy. The Franco-Prussian War was a disaster for France and spelled the end of the Second Empire. A detailed history can be found on the blog post.


See a large, high resolution version of the map here.
Posted by Dug at 6:29 AM 0 comments