Mapping the Detroit Riot from the Streets

50 years ago one of the largest riots in US History took place in Detroit. The following year geographer William Bunge began an innovative project, the Detroit Geographical Expedition. People from underprivileged neighborhoods were taught to use mapping as a tool to highlight racial inequities. These untrained mappers created some excellent maps showing the plight of their neighborhoods. I plan to show more of these in a future post, but for now here are some maps of the 1967 riot.

The report that includes these maps can be seen here - this is a large file that may be slow to download. 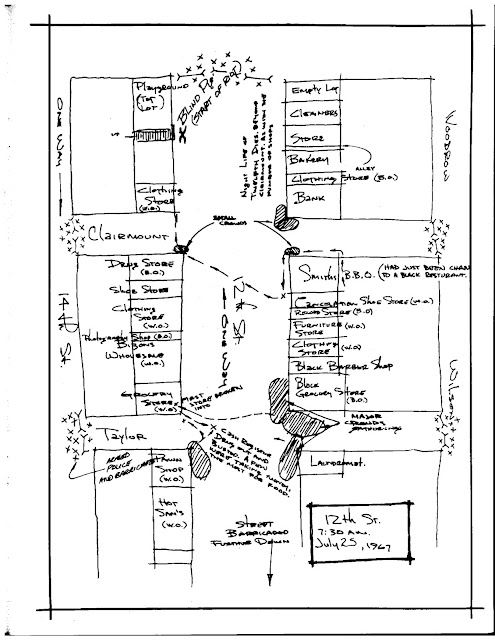 The riot stemmed from a raid at an after hours bar called the Blind Pig (top of the map) on 12th Street (now Rosa Parks Boulevard). The next map shows the spread of the riot between 7:30 and 9:30... 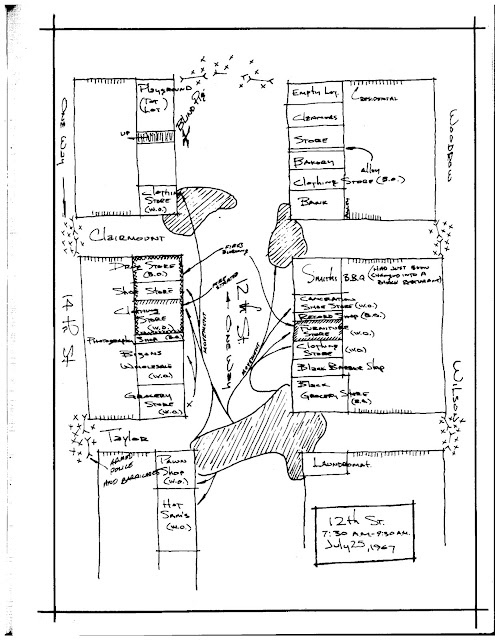 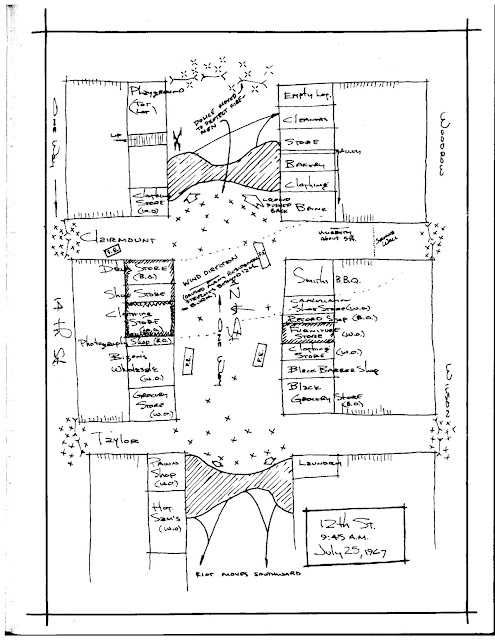 Here is a map of fire damage across the city. 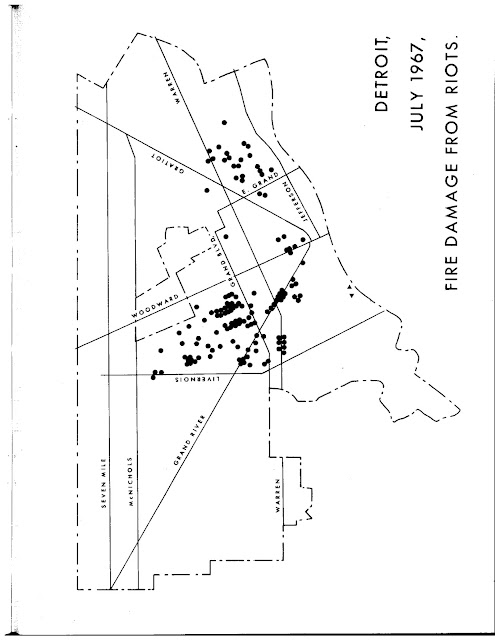 The 12th Street Riot area is the dense cluster north of Grand Boulevard and West of Woodward.

*Most accounts say the riot began on the 23rd - though it lasted for several days, these maps appear to show the early stages. Therefore the date on the map (the 25th) may be inaccurate.

Message in a Bottle

This map appeared in my inbox a while back and now I can't seem to find any reference to it online. 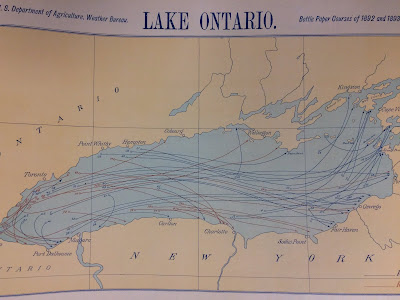 If you put a message in a bottle, who will find it? The map is credited to the Weather Bureau of the USDA and shows "bottle paper courses" from 1892 and 1893. The legend is cut off but I think that the blue lines are from 1892 and the red from 1893. Either the weather bureau actually placed bottles and then retrieved them or this is just some theoretical map based on currents.

Almost all of the bottles travel eastward, with the flow of the St Lawrence Seaway. However the ones placed near shore in the Toronto area get caught in a counterflow that takes them to the west before heading south and then back to the east.

If anyone has additional information about this unusual map I'd love to know more.
Posted by Dug at 6:20 AM 0 comments

I enjoy making fun of the sometimes cultish nature of the Esri User Conference. However, among the over-hyped items there is a really useful map for the visually impaired on display.

Have you ever wondered how to explore a map with your fingertips? Check out the #tactile #atlas at #icc2017dc #cartography for the #blind pic.twitter.com/EmnHejAneb
— Anna Vetter (@Carto_Anna) July 5, 2017

Created by Anna Vetter of Esri Switzerland, the map uses minimal and well separated details so the user can feel their way around the country without being confused with too much conflicting information. More good pictures from Twitter can be seen here,

This is remarkable. A 350-page map of Switzerland for the visually impaired. The whole country represented in textures, geometries, braille. pic.twitter.com/uMsB0I9YtO
— Wayne Chambliss (@rwchambliss) July 9, 2017

and here, where you can see it in action at the conference.

Esri has put together a nice online version of the map. You can't feel it but you can pan, zoom and get the visual idea. 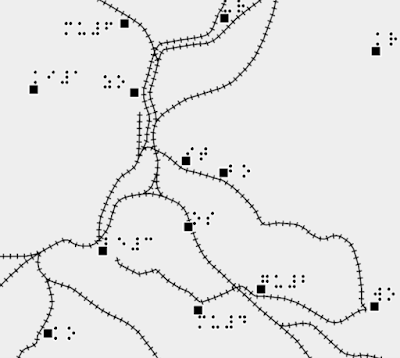 The legend shows the wonderful simplicity of the maps. 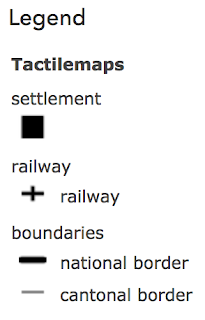 Location: Switzerland
Email ThisBlogThis!Share to TwitterShare to FacebookShare to Pinterest

The Ancient Earth Globe allows you to pan, zoom and rotate the earth to see what it looked like during various eras, from 600 million years ago, 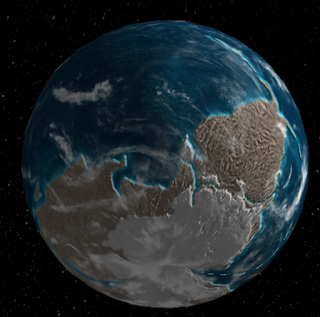 to a more recognizable 105 million years ago, 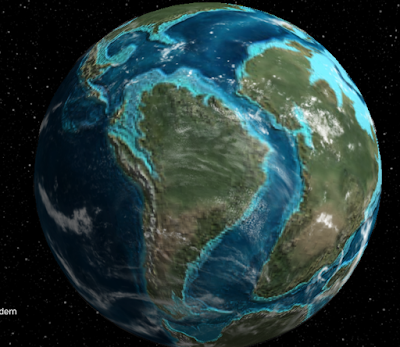 to a much more recognizable 20 million years ago. 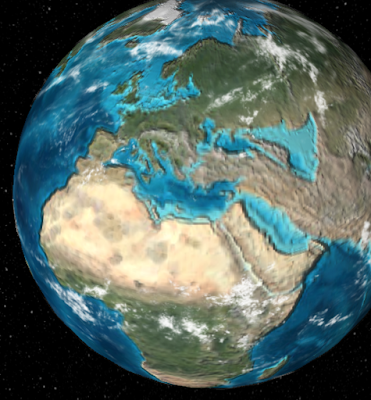 You can spin it around yourself, or sit back and watch it rotate.

There are arrow keys to move it through eras of time-in 20-40 million year increments.

There are also options to remove the clouds or jump to specific era's in the planet's life. 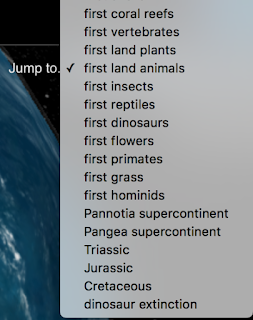 This visualization was created by Dinosaur Pictures, who specialize in high resolution images of dinosaurs.