In honor of Canada's 150th birthday here is an animation showing the evolution of the provinces and territories via Wikipedia.

Location: Canada
Email ThisBlogThis!Share to TwitterShare to FacebookShare to Pinterest

In 2015 The Guardian posted a couple of interesting maps highlighting the trends of urbanization. By 2050 the world population is expected to be 70% urbanized. Here is a map showing how many people are added each hour to the world's large cities.

The data is from the London School of Economics Urban Age program. The map is a bit hard to read. Numbers are sized by city growth, making lower growth cities like London hard to read. Since the dots are already sized by number they could have kept the numbers all at a readable size. Also using a different color for each continent is somewhat pointless. Nevertheless the data is interesting-Lagos gains 85 new residents every hour while Rio only gains 10. 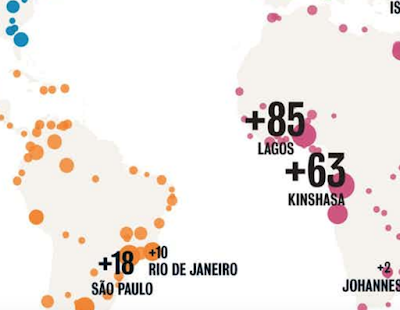 The map below shows past and projected growth by time period. 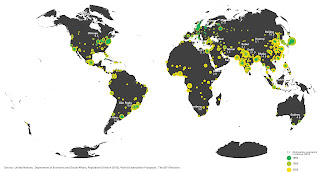 Green cities saw most of their growth occur by 1950 while the more yellow ones are currently seeing the most growth. Some cities, particularly in India have a more mixed pattern of concentric circles showing steady growth throughout past and future decades. These maps are a bit hard to read at this size. If you click on them, you can see larger sizes. Here is a detail from the map above showing Europe vs South Asia and East Africa. 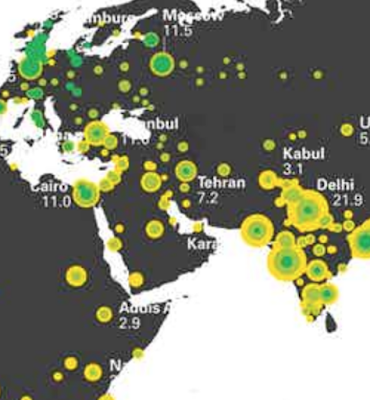 For much more on the urban footprint, environmental impact, economic development and land use see The Guardian

Chris Engelsma is working on creating fantasy maps for the 50 states using toponyms - translations of place names to their original meanings. Here is North Dakota , aka Northern Land of Friends. 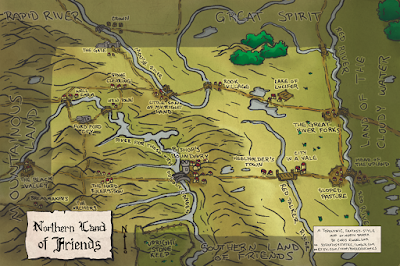 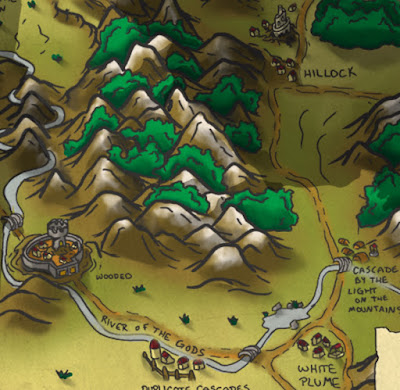 10 states are completed. Prints are available on his Etsy page. This also includes his map of Australia. 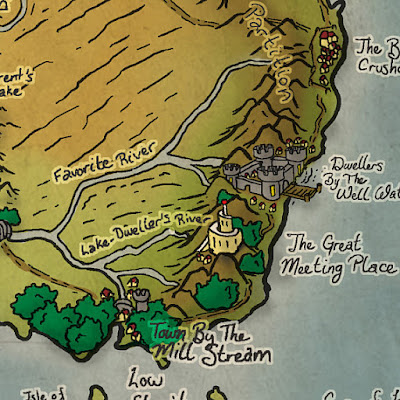 Last December I posted some maps showing the ships that are buried under San Francisco. As a quick recap, what is now the Financial District was once a shallow cove. During the gold rush many ships landed here and were quickly abandoned or sunk. The cove was eventually filled with these ships still in place.
The San Francisco Maritime National Historical Park is working on a new map of these ships, adding details from archaeologists that were not on their original map from 1963. 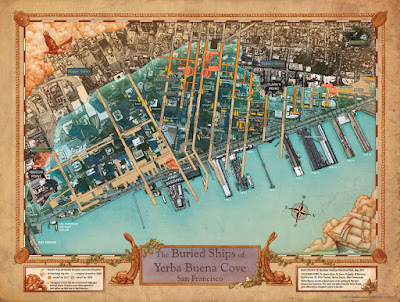 This map will appear in the Park's visitor center. Here is a detail from the image-via National Geographic 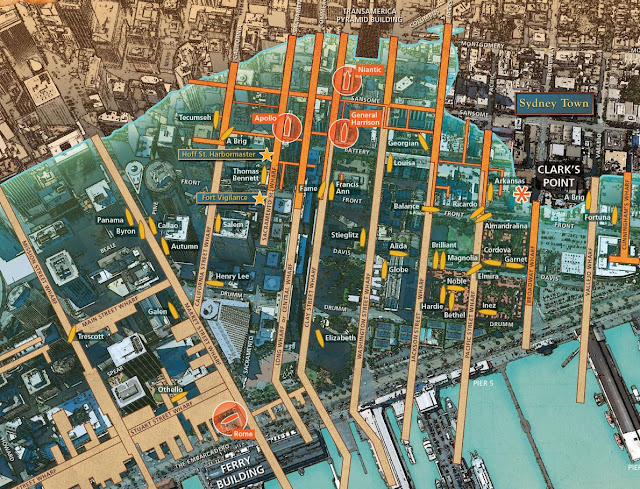 A detail of the detail just to show how nice it looks up close. 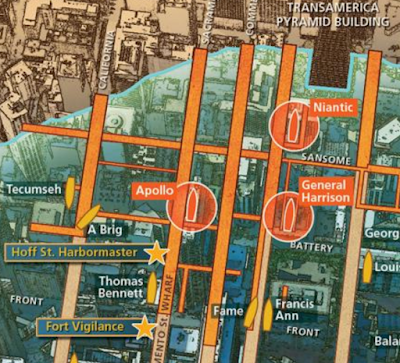 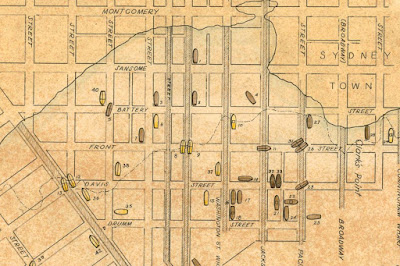 For more see the National Geographic story
Posted by Dug at 5:48 AM 0 comments

The Evolution of Ordnance Survey Mapping

Britain's Ordnance Survey has consistently produced some of the world's finest and most detailed maps. Here is a display showing the evolution of their mapping styles, blended together with Photoshop.

I like the subtle stylings of 1895. You're welcome to disagree. I also really like how the legend is made from a theoretical landscape. 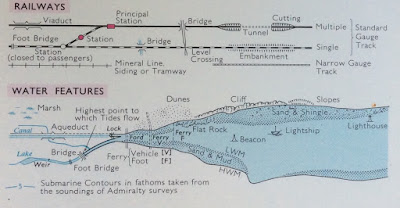 Our local Bostonographer and Maptime Boston co-host Andy Woodruff has been working for a while on mapping what is across the ocean from where you stand. His latest "flowing and exploding" version is quite fun to watch,

or interact with by pointing your mouse and seeing where it goes-here.

If the results are unexpected it is because the lines go perpendicular to the coastline, rather than following a specific latitude. We are conditioned to think that "across" means the same latitude on the other side. As children going to the Jersey shore we imagined that we were looking at Portugal on the horizon-because we were geography nerds. However the shore is angled in a northeasterly direction so you are actually looking southeast, towards either South Africa or in some areas missing that continent entirely and rounding the Cape of Good Hope, reaching all the way to the west coast of Australia. That would be the case for most of the shoreline, but any bay or other odd turn in the coast and you may be looking at Norway, Nova Scotia, Morocco or Brazil.

If you are more interested in latitude, there is a nice map series from the Washington Post, showing the continents color coded by what's across the way. Here is Africa, for example. 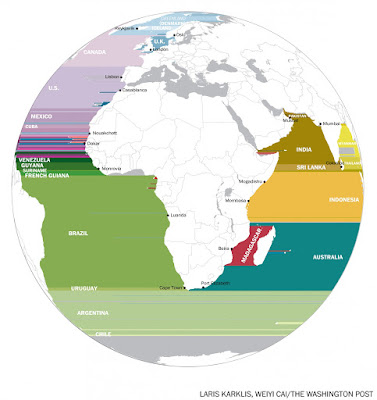 This one shows that Portugal is across from the Jersey shore but to see it you need to look at an angle. 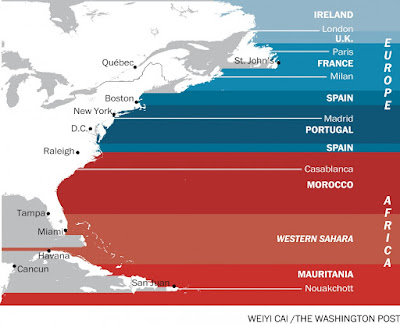 Location: Down The Shore
Email ThisBlogThis!Share to TwitterShare to FacebookShare to Pinterest

Maps of the Flat Earth Society

In a world of alternate facts and ridiculous theories, the flat earth alternate fact has stood the test of time despite obvious evidence to the contrary. All NBA star and flat-earther Kyrie Irving needs to do is look out the plane window on his next flight to see the curvature of the earth. He doesn't even need to pay attention to the northward tilt of the flight path. 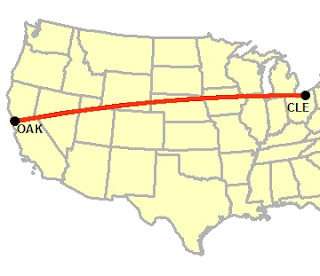 The Flat Earth Society has various examples of flat-earth maps such as this one by Samuel Rowbotham. 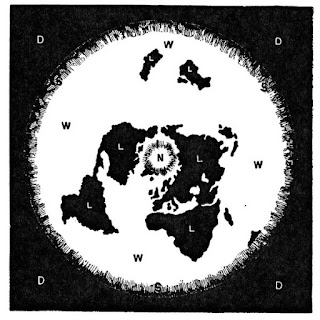 It has a nice letter coding system to help the average flat earther figure out the difference between Land (L) and Water (W). N is the north pole (more on that below) and D is...darkness?

One of the most common maps used by flat earthers is from Wilbur Glenn Voliva, an evangelist who offered a $5,000 prize for anyone who could disprove the earth is flat. By choosing to disbelieve any takers, he never had to pay the money. 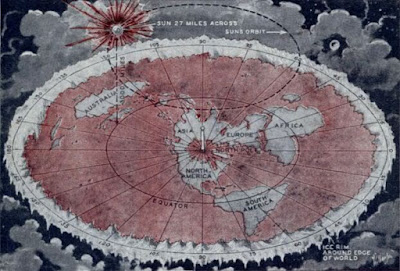 What these maps have in common is that they all see the world as round-circular or elliptical. The Sun (as shown above) rotates around the equator, explaining the differences in climate. They believe in the North Pole, but not in the South Pole. The southern edges of the world are conveniently edged by a wall of ice to keep mariners from falling off. Some believe in a dome shaped sky with stars hanging down.

The belief that the South Pole cannot exist, gives rise to many conspiracy theories about why airline flight routes go the way they do. These theories are easily debunked by anyone who has flown between cities in the southern hemisphere. 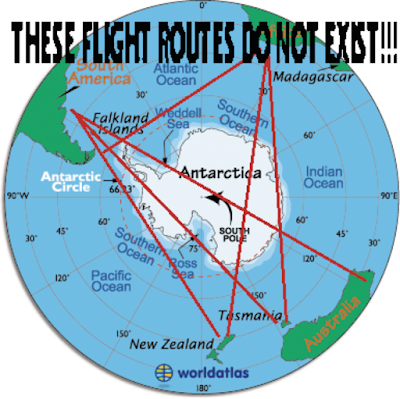 Yes they don't fly over the South pole because the great circle routes are much further north.

Here is a flat earth globe 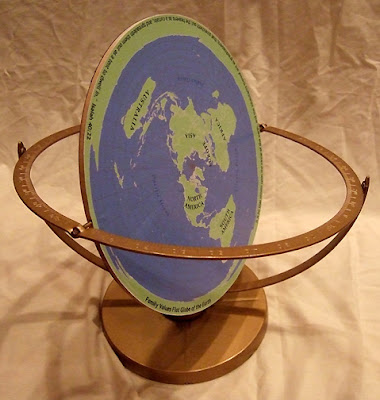 For more see the Flat Earth Society's maps page.
Posted by Dug at 6:58 AM 8 comments