I stumbled upon an exhibit of abstract art based on an aerial photo of Fenway Park and the surrounding neighborhood at the Newton (Mass.) Free Library yesterday.The artist is Angela Fiori.

Fenway Park is one of Boston's premier tourist attractions and the oldest operating stadium in Major League Baseball. Part of its charm is the unusual dimensions required to squeeze it into the dense and irregular street pattern of the neighborhood. This is captured nicely in these paintings. 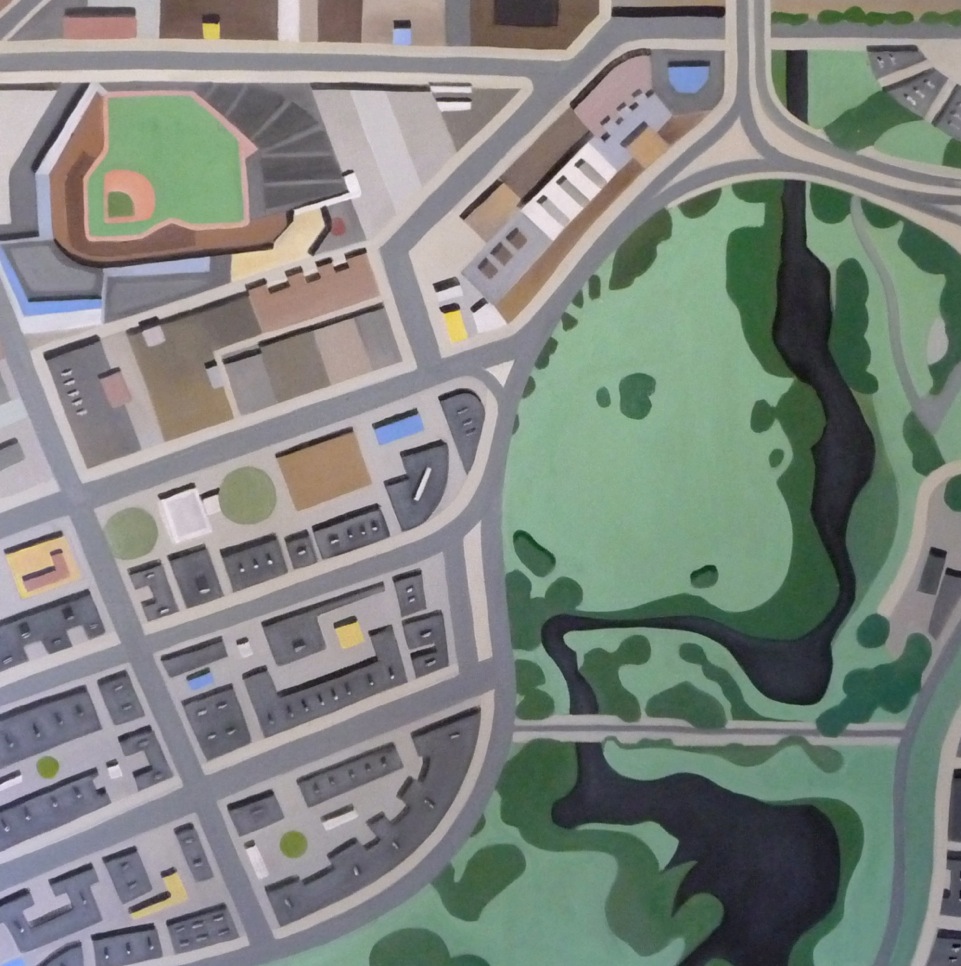 Some of the views are a little more abstract than others. 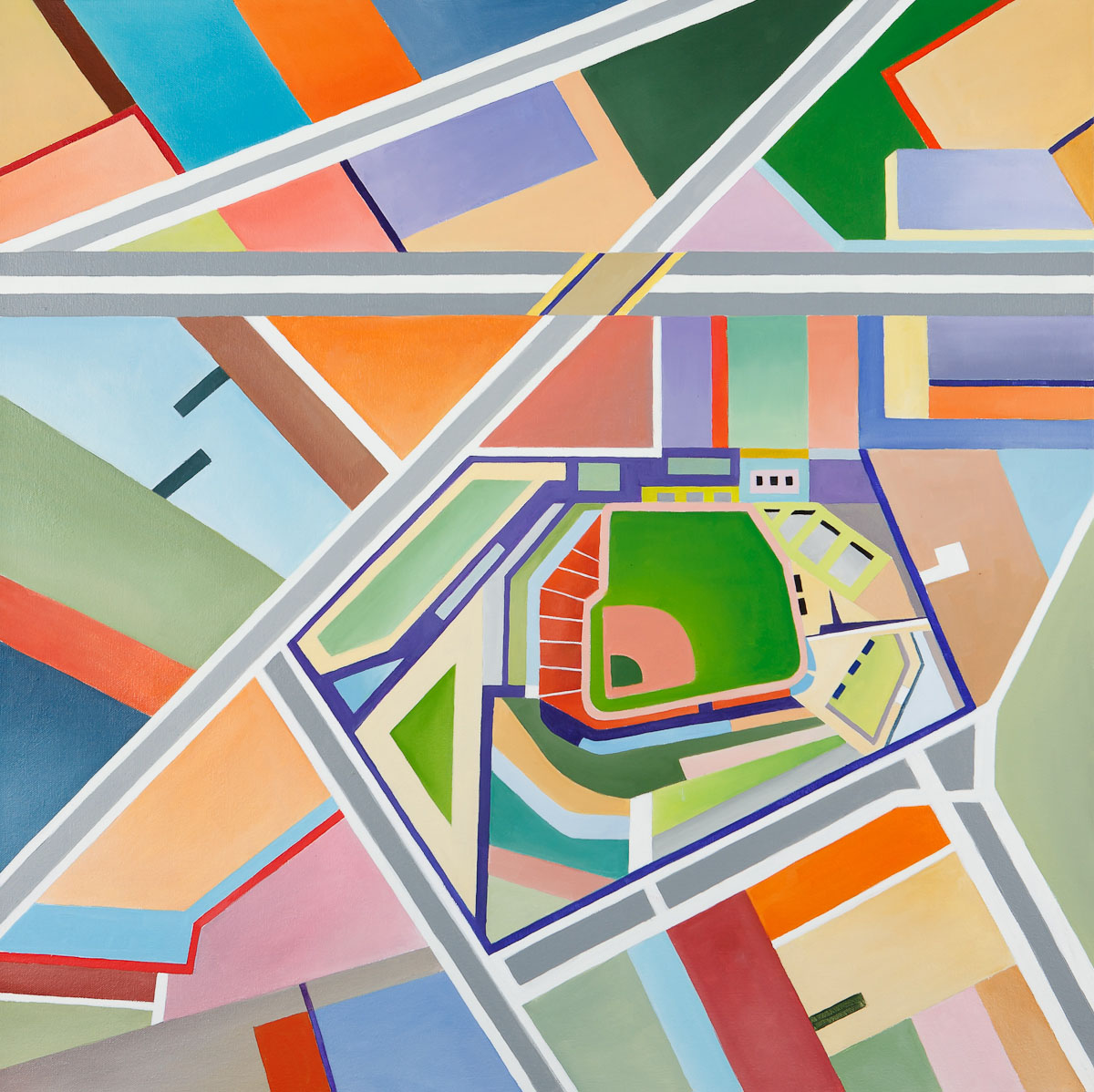 Unfortunately today is the last day so you'll have to go quickly if you want to see them on a wall. Otherwise you can visit Angela Fiori's website to see them there. Fiori shared some additional images for me so here are some more: 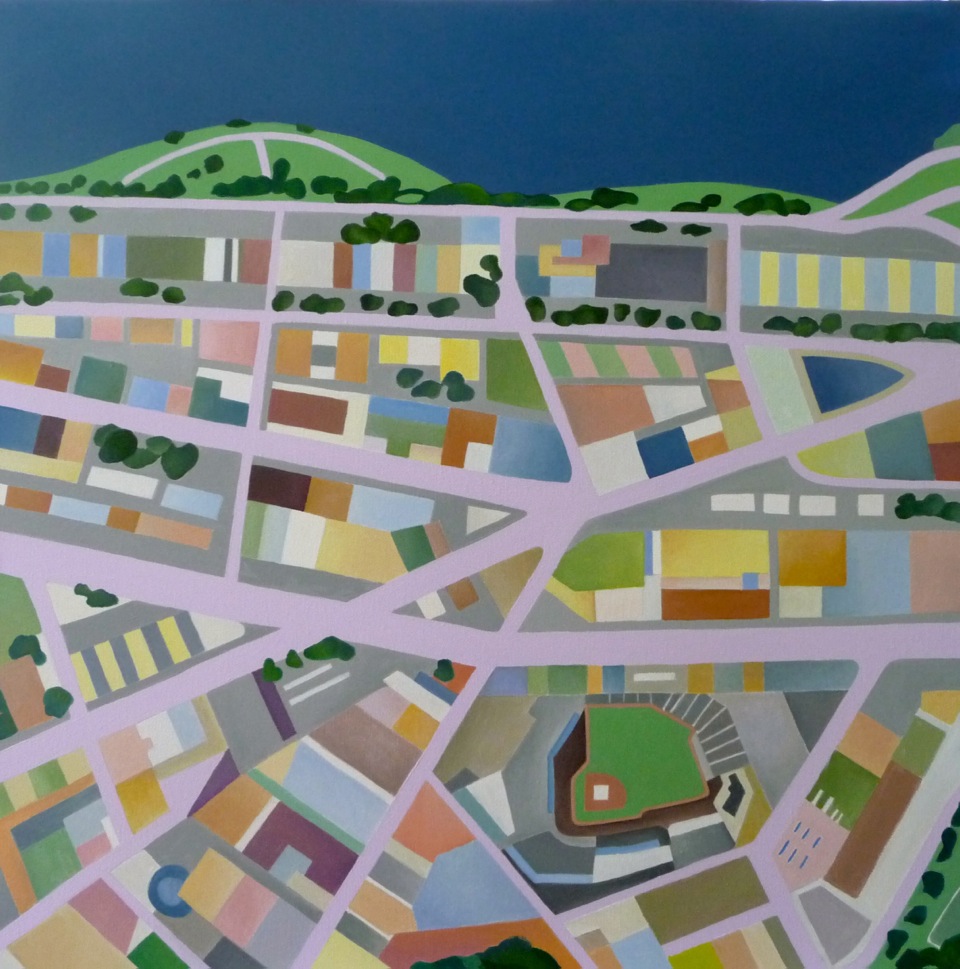 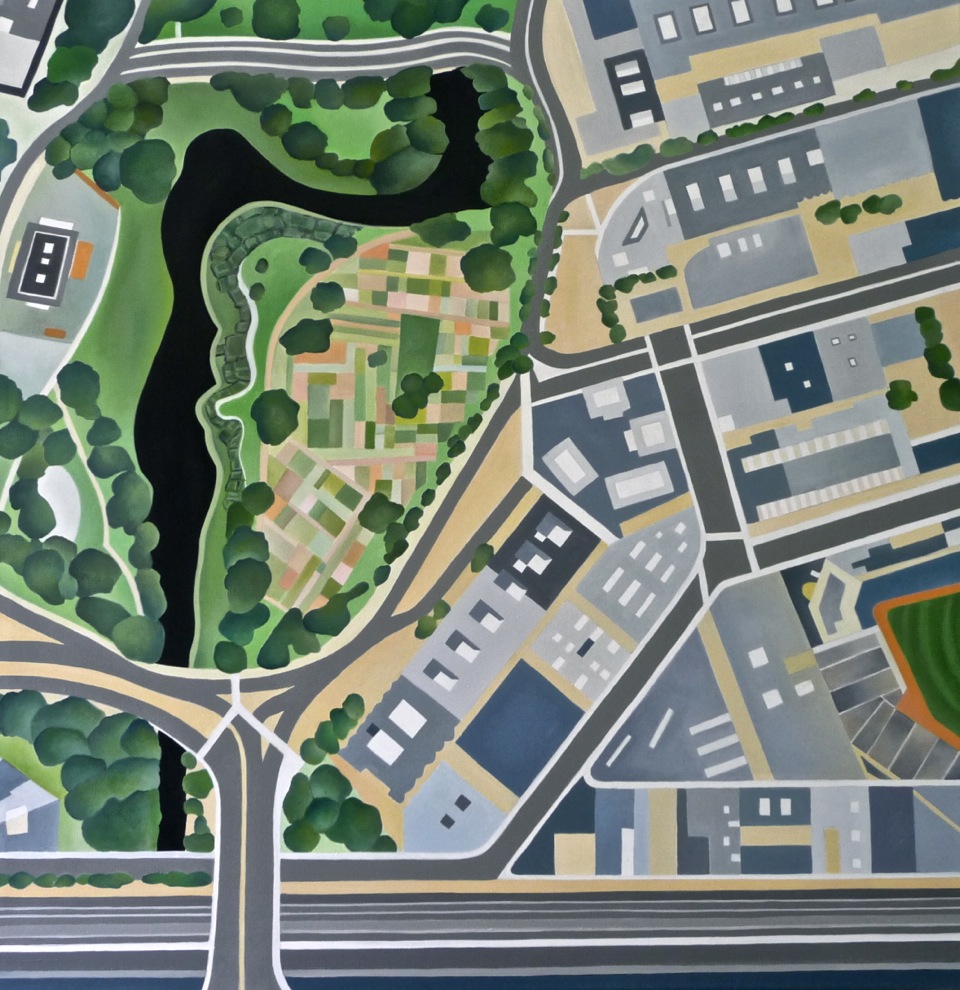 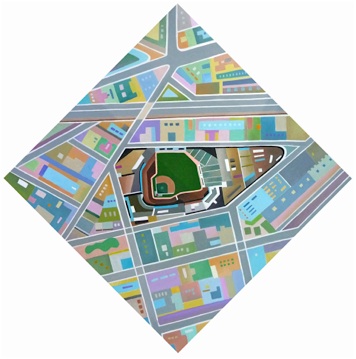 Monday I got to see the Phillies lose there for my birthday. Here is a panoramic photo from my phone.

Reuters posted a report about last month's explosion in West, Texas* including an interactive map showing facilities that store Ammonium Nitrate. You can zoom out to the entire country and see data for the 29 states that provided data to Reuters. Ten states did not respond and and eleven others refused to provide the information.** 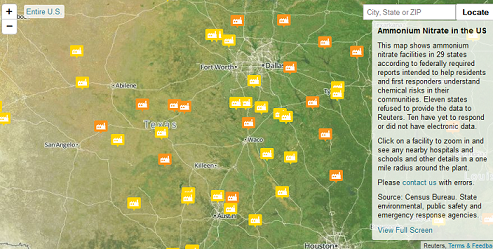 Though I have not found a legend or explanation, it appears that the darker orange facilities are ones that have at least one school or hospital within a one mile radius.


At least 800,000 people in the United States live within a mile of 440 sites that store potentially explosive ammonium nitrate, which investigators say was the source of the explosion in West, according to a Reuters analysis of hazardous-chemical storage data maintained by 29 states

A click on the facility brings you a local view showing the potentially vulnerable population. Below is the West Fertilizer Company with six schools within the mile radius.

Buddy's Plant in Ballinger, Texas is an example of a plant that has hospitals in addition to schools within the one mile radius.

Some not very meaningful personal observations:
*West, Texas is not in West Texas - a fact that bothers me and probably not many other people.
** The geographic pattern of non responding states and those that refused is kind of curious.

The New York Times put together an excellent map showing the extent of destruction from Monday's tornado in Moore, Oklahoma. The map is based on a visual survey of the aerial photography. It shows that at least 1,500 buildings were destroyed or severely damaged, including entire neighborhoods.

It's truly amazing what nature can do in a few minutes and there's lots of voyeuristic photos on the web page - just be thankful if you're not one of the thousands of people affected.

The Office Tour of Scranton

Last night was the final episode of The Office. In memory of the show here is a map of Scranton from the Pittsburgh Post-Gazette.

The article that accompanies the map gives you some details about some of the sights including the quotes below:


Paper Magic Group, which makes greeting cards, Valentines and other seasonal products, is often confused for Dunder Mifflin. The office building is shown briefly in the show's opening credits, along with a Mulberry Street sign.
And actor John Krasinksi, who plays Jim, visited Paper Magic when he was scouting possible locations and filmed the opening montage of the city from his car.


Brenda Stanco and her step-father John Xanthis, owners of Niko-Bella restaurant in Scranton, hung a banner outside their restaurant, after one episode had the character of Michael getting a sandwich delivered from the restaurant.


Farley's restaurant also got a quick mention on the show.
"I want to be to 'The Office' what Monk's Restaurant was to 'Seinfeld,' " said Bill Young, owner of Farley's. A 10-year-old customer suggested a Michael Scott burger, a cheese-slathered burger Mr. Young is going to add it to the menu this fall.


A Dunder Mifflin sign hangs outside City Hall in Scranton.


The buzzed-about comedy has also brought Scranton some reverse chic. Mr. Burke of the Chamber of Commerce said his nephew, a comedy writer in Los Angeles, was always teased about being from Scranton. But once "The Office" became a hit, his friends were asking him for Scranton mugs.
So the chamber sends their mugs to West Coast hipsters. Among the Scranton props that Ms. Potis has sent to the show are a blue Chamber plaque, a Froggy 101 bumper sticker plastered on a filing cabinet, and the coats and hats from Niko-Bella restaurant.

The city's history also gets a brief mention:


Scranton, named for industrialist brothers George and Selden Scranton, was the anthracite coal capital in the 1930s and the third largest city in Pennsylvania with 140,000. But as alternative sources of energy were tapped in the 1950s, the coal industry suffered and the city lost about half of its population, said Willis Conover, chairman of the history department at the University of Scranton.
In 1992, the state declared it a distressed city, a designation it still holds. But the Downtown has brightened with a new mall, a Hilton, 12 new restaurants and Sanofi Pasteur , a pharmaceutical company. And the town square has been illuminated with a huge "Electric City" sign, a reference to its designation as the first city with an electric trolley car.

I found this on flickr, a while back and never found the right time or excuse to post it. So here it is - a typographic map of Dallas from the photostream of  Justin Cozart. 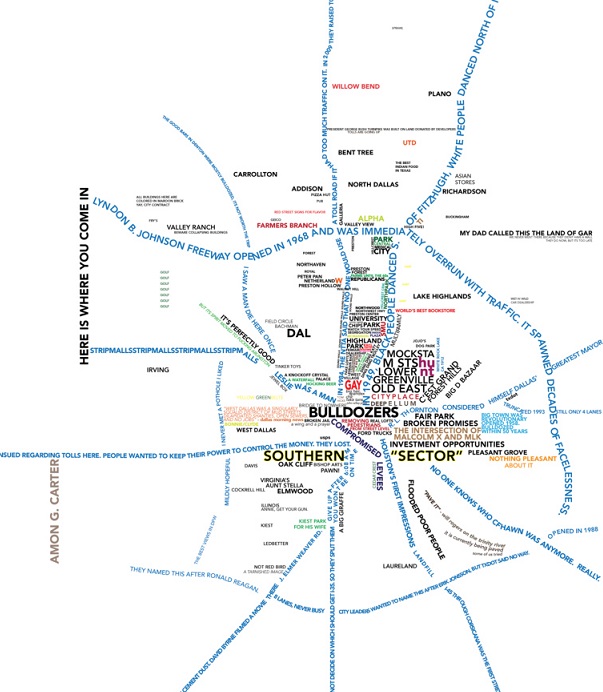 In order to see all the little text blurbs, you need to analyze the full size version. Here is a detail: 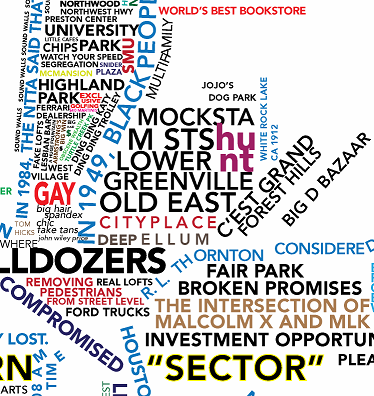 Having only seen Dallas from a DC-9 at night I can't really comment any further.
Posted by Dug at 7:17 AM 0 comments

To honor National Bike Month, these maps show some modest steps that a city can take to make a city significantly more bikeable. A report from the Mineta Transportation Institute and discussed in The Atlantic shows how the layout of the city of San Jose creates disconnected islands of low stress bicycle routes. 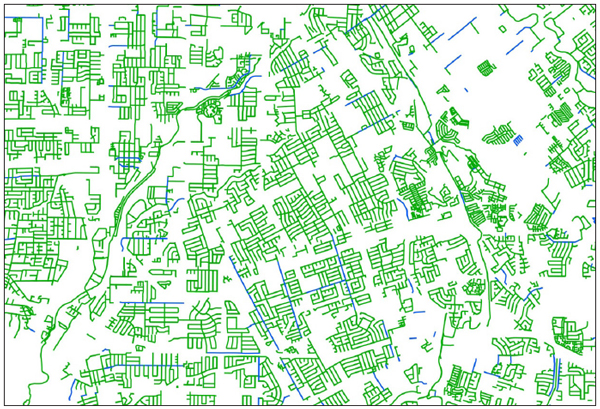 The map above shows only the two lowest levels of stress. The green streets are considered suitable for children and the blue are streets that most adults "will tolerate."

Some modest improvements (the red lines below) can go a long way towards making the city more connected and making major destinations such as college campuses easier to access. It would be nice if these two maps were at the same scale for comparative purposes but the idea still comes across. 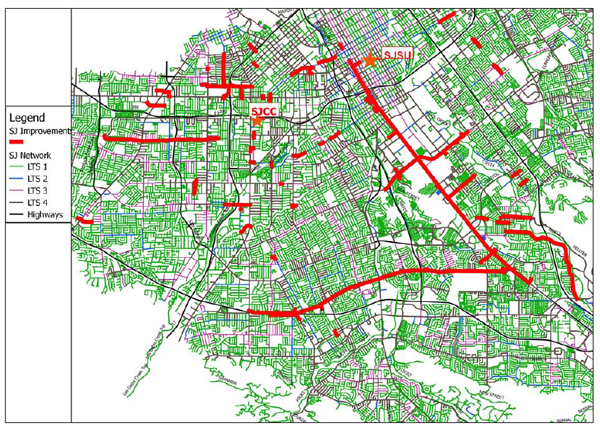 The report does not layout specific suggestions for types of improvements but co-author Peter Furth argues that most of the suggestions have low to moderate costs. "Even the higher cost solutions are still an incredible bargain, 10 times less expensive than the kind of infrastructure we do for transit or highways."

Author Caroline Paul's cat disappeared for five weeks before returning home. Wondering where he went she fixed him up with GPS and mapped his wonderings. 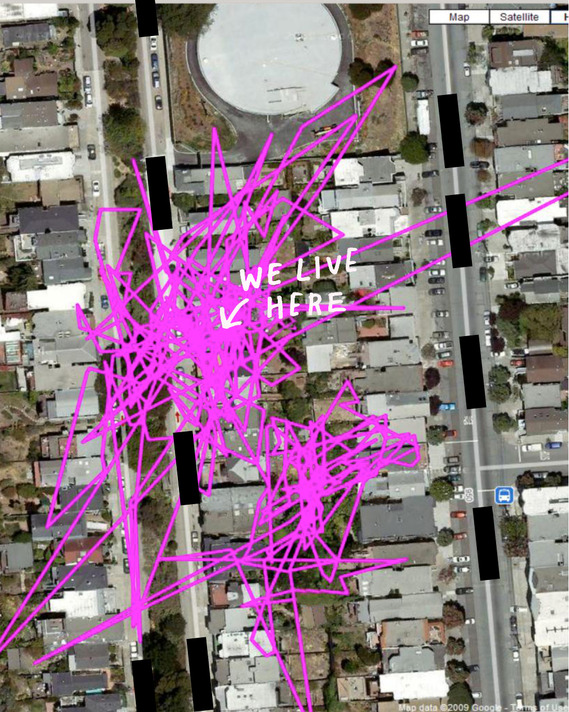 The story and process are documented in Lost Cat: A True Story of Love, Desperation, and GPS Technology. The map above shows 10 hours of the cat's wanderings through part of San Francisco. He prefers certain nearby houses, but does get around and crosses many streets. He appears to have little interest in that water tower-like structure at the top of the image.

Upon further digging, I found this map from the book on the Lost Cat website showing the neighborhoods as seen by their cat. 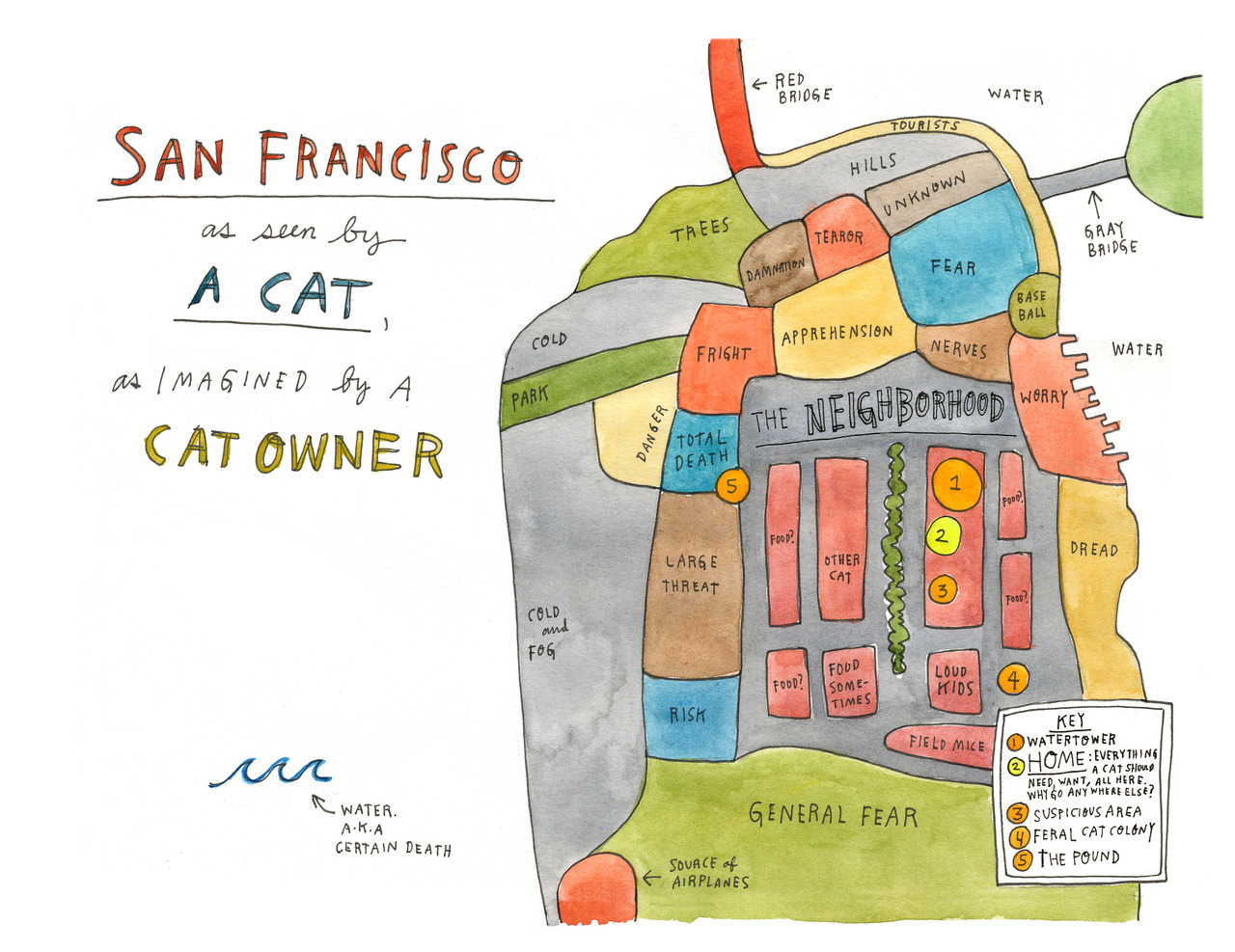