This is a map from 1987-88 showing areas suitable for growing Cocoa in the Rio Cobre Valley of Jamaica. The map illustrates what we cartographers had to deal with in the early days of computer maps - a small set of ugly and hard to read shading patterns. The map is remarkably usable considering that. If you zoom in on the image you can actually tell the areas apart and match them to the legend.
Suitability for Cocoa growing was determined by overlaying population density, roads, soils, slope of land, rainfall and temperature. This map was displayed by ESRI to show off the magic of this new technology called GIS. 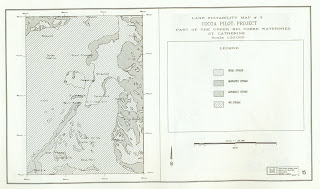 For a very different take on mapping look at the Marshall Islands. They construct "stick charts" that emphasize ocean swells as much or more than geographic locations. Click the image and the page shows some examples and gives you more information about them. 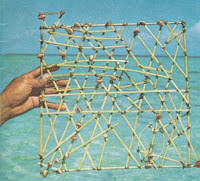 Watch counties evolve across the USA with this cool animation.

Here is an interactive map of Biodiversity Hotspots published by Conservation International.
Click on an area to get maps, photos, statistics and a boatload of other worthwhile information.