A Mappy Day at the U-Haul Store

A couple of years ago I had a post about maps on U-Haul trucks. Today I had to go to the U-Haul store. While there I saw some more nice trucks. 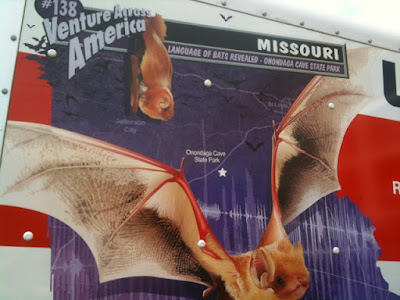 This Missouri truck features the bats of Onondaga Cave State Park. From close up the bat at the top looks like its hanging right off the truck. I like the gratuitous highway details around St. Louis. The full graphic can be seen here. 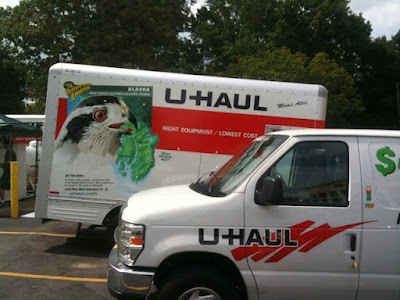 The Alaska truck shows a large goshawk. The close up view reveals some nice relief detail of the Tongass National Forest. 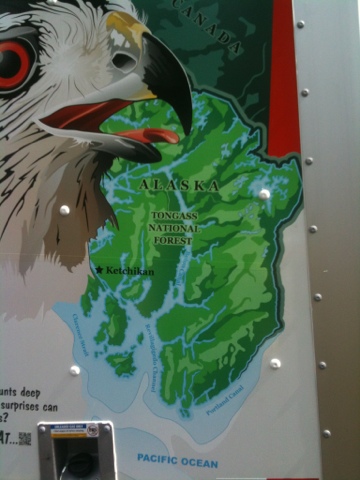 Iowa's truck features the Manson Impact Crater. This crater is 24 miles in diameter and is believed to be caused by a meteor's impact 74 million years ago. 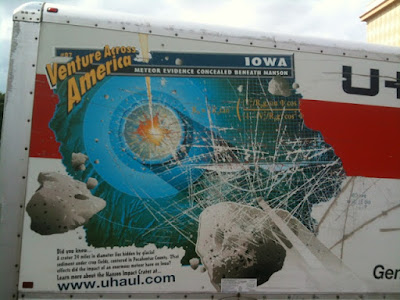 Off goes the Missouri bat-mobile on a mission! 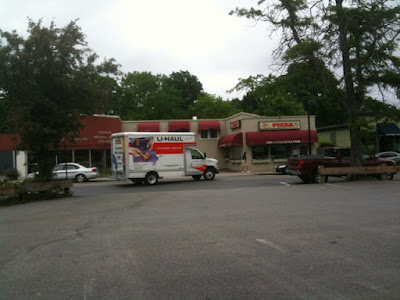 In the interest of full disclosure this was actually taken on a different day in a different location.
Posted by Dug at 8:00 AM 3 comments

A good way to commemorate the 200th anniversary of the War of 1812 is by playing the board game.
This is the map board

From the Columbia Games Web Page:

War of 1812 is an elegant strategy wargame depicting the Anglo-American struggle to control the Great Lakes and Canada.
War of 1812 sets up in five minutes and plays in 1-2 hours. This classic game has been enjoyed by thousands of gamers for over 30 years.
Unit types in this edition include artillery, cavalry, infantry, and navies. The map board is unchanged from previous editions.


This page also has a good summary of the war, mostly a listing of failed campaigns by both sides and the partial destruction of cities such as Buffalo, Toronto and Washington. The game strategy much like the war's is to concentrate your forces on one or two of the four Great Lakes fronts (Detroit, Niagara, Kingston and Lake Champlain) and attack early (in 1812-13) before the Napoleonic wars abroad wind down and the British forces receive major reinforcements. If you play the British side, try to hold out in a defensive posture until those extra forces arrive.

Here are some close up images from the board. The first one highlights Sacket's Harbor, New York where American naval forces were concentrated and where two attacks by the British were successfully repulsed. 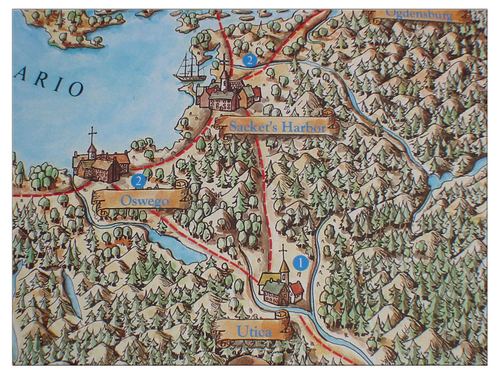 Here is the western frontier where the war began with American forces crossing the Detroit River and invading Canada. British forces responded by driving them back and then surrounding Detroit. 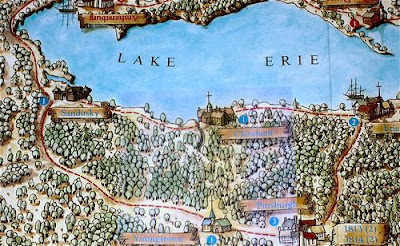 These are the labels you stick on the wooden blocks to indicate who is where.

In the long run nothing really changed. Both Americans and Canadians decided that they were victorious. In the game version whoever can control the lakes and/or Quebec can rewrite history.
Posted by Dug at 12:13 PM 2 comments


The nav-U, a personal navigation device that can be mounted on a bicycle, started the Tokyo Zoo Project. This is a virtual zoo where the animals are drawn by cycling through the streets of Tokyo. 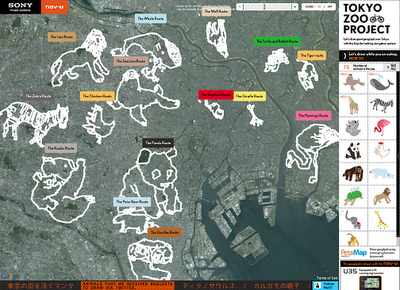 You can zoom in and click the animals for route details such as this: 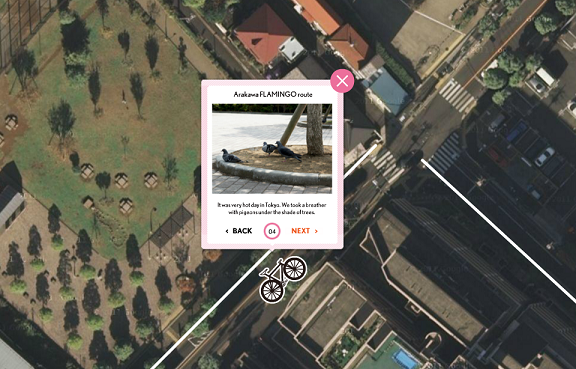 For more precise directions you can go to the PetaMap site. 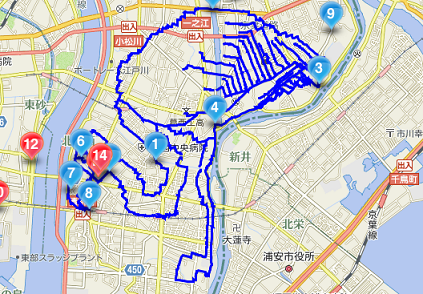 There's also a how to page that shows how the elephant was created. This page gives you some interesting details encountered on the ride such as the line of cats along the elephant's trunk in "Cat Town;"

and along the banners of the nearby shopping street. 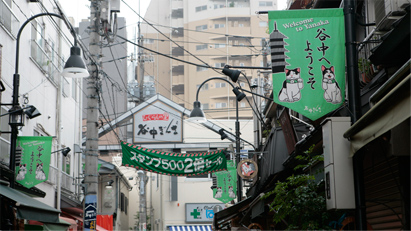 Thanks to Rafael from Urban Demographics for sending me this link.
Posted by Dug at 7:15 AM 0 comments

The United Shapes of America 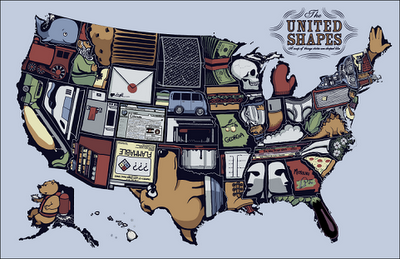 According to the author:


It's a hand-drawn map I made of the United States, with every state replaced by something I've always thought the state was shaped like like. (Florida is an eggplant, of course, what else would it be?)

You can see a larger version here. Some of the more creative ones are Montana as half of a muffin, Vermont as an upside down microscope, Tennessee as a stack of books and Illinois as an upside down gangster. I'm still trying to decide if the Georgia-Missouri switch is clever or just a cop out. Judge for yourself.

With the London Olympics ongoing, I dug out some interesting old maps of London from the Probert Encyclopaedia. This online encyclopedia has an excellent collection of maps that are free to the public at low resolution and available for purchase at higher resolutions.

This colorful map, the County of London Plan; Communities and Open Space Survey from 1943 provides a nice illustration of places you've heard about from literature or from lyrics by the Rolling Stones, Squeeze, the Clash or the Kinks.The Olympic Park is in the purple industrial area at the northeast edge of this view. 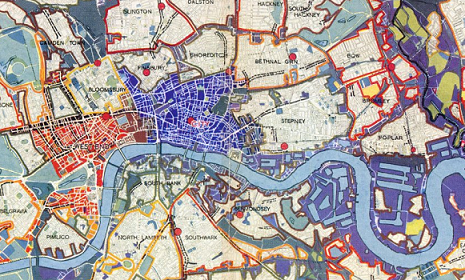 This is an odd looking map - a Social and Functional Analysis, also from 1943 showing the communities with a high proportion of "obsolescent" property highlighted (lowlighted really) in gray. I think this map inspired the Lava Lamp. 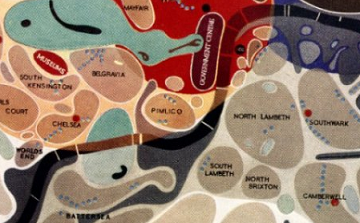 When I tell people what I do for a living I often mention mapping the sewer systems. At this point my wife will remind me to tell them about the "interesting" things I do. I think sewers are interesting even if others don't. Here's a detail from map of London's main intercepting sewers from 1865. 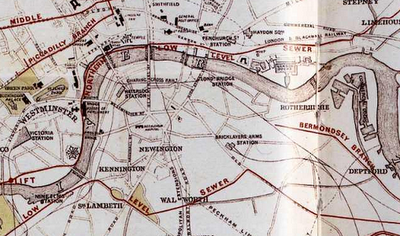 As indicated on the title block these sewers were constructed out of concern for the water quality of the Thames - even back in the 1860's this was an issue. 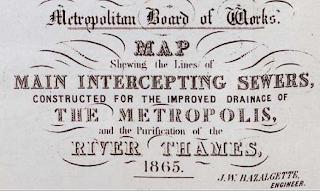 The main lines empty into outfalls well east of the city to keep sewage away from the population centers. 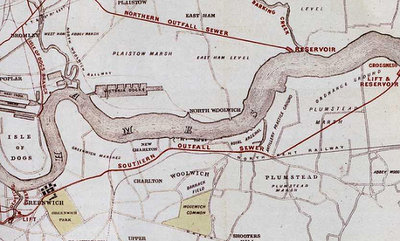 Ending further back in time, here is London in 1574, a slightly smaller city than today. 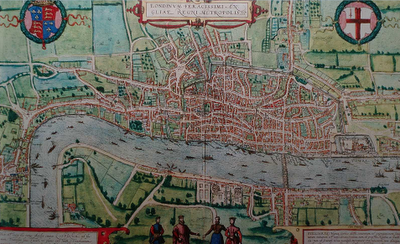