Comic of the Week-Zippy Tackles Maps!

The World of Juan Nunez Guirado

Juan Nunez Guirado is an illustrator based in Spain who sent me a link to his work. Here is his world view.

He's done some nice pictorial maps and illustrations of various places in Spain. Here are some from Barcelona.

For a more detailed view, some soothing music and many more maps visit his website.
Posted by Dug at 7:53 AM 0 comments

My brother discovered the Mapping Gothic France website at a lecture. The site is dense with interactivity. The main interface allows you to overlay various historic maps with your choice of current base maps, click on churches and buildings and connect to more information than you can possibly absorb in one viewing.

Like a chef you can mix and match your ingredients as you see fit-below you can see King Philip II invading Normandy over a tasty layer of road map.

There are timelines, links to authors, stories and essays and lots of information about churches. Each church has its own page with images 360 degree panoramas and stereoscopic views (though I could not get those to load) that require 3D glasses. For dessert, some screen shots from a panel that allows you to select churches and compare images and floor plans.

Map of the Weekend-Cape Shot

It's the weekend. Time to find your favorite map shot glass and drink a toast!

Nicaraguan "Invasion" caused by Google Maps - or maybe not.

Nicaragua invaded Costa Rica because of an error on Google Maps! At least that's the story being tossed around the internet in articles like this one and in Wired. Of course like many stories, the truth appears to be more complicated and less satirical. Ogle Earth has an excellent summary of the border dispute. Here are some basics:

Here is a map of the area claimed by Nicaragua from Managua's La Prensa. The red line is claimed to have been the course of the river in 1897 when US President Grover Cleveland arbitrated a more detailed boundary (than the 1888 settlement) for this area. 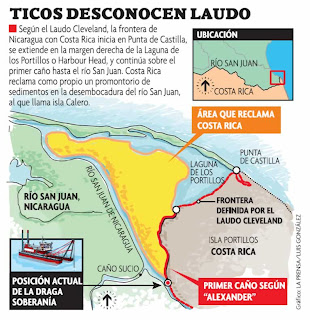 However, the UN Settlement includes this map and contradicts Nicaragua's claim. The settlement clearly states that the boundary follows the main branch of the river and not the Taura Branch as claimed by Nicaragua. 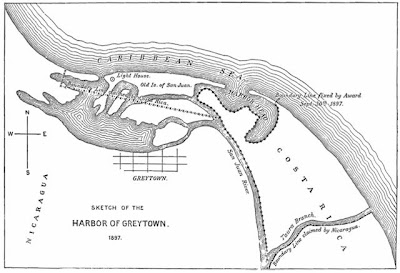 What I do for a Living-Part 1

Things are really busy for me this week. We have a big infrastructure evaluation project that I need to map and analyze every which way. Since I don't really have the time for an interesting, well researched post, here are some storm drainage pipes somewhere in Massachusetts. This is what I do in my non-spare time.