A new satellite survey of Egypt using infrared sensors with submeter resolution has revealed thousands of tombs and settlements that are buried under silt in the Nile Delta region. A team, led by Egyptologist Dr. Sarah Parcak, Ph.D. is using the imagery to locate future excavation sites. The infrared band of the spectrum enables analysts to distinguish building materials from the surrounding soil. This image forms a streetmap of the ancient city of Tanis - a much larger city than many people expected to see. 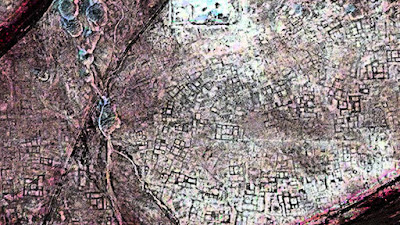 Is that the world's first expressway cloverleaf in the northwest corner?

For a regional perspective use this BBC map.

The imagery also reveals where and when sites have been looted so authorities can be on the lookout for antiquities that appear for sale. More details and a video can be found on the BBC and a program, Egypt's Lost Cities will be aired Monday on BBC One.

As children, we knew our city was the fourth largest and that it would always be that way. Then in 1990 something awful happened-Houston moved ahead of us. Still, we could take solace in the fact that our metropolitan area was number 4 and Houston only got ahead by swallowing up a bunch of suburbs. Now that the Census 2010 verdict is in we are number 5 on all counts and just barely hanging on. These maps from the Philadelphia Inquirer illustrate our angst. 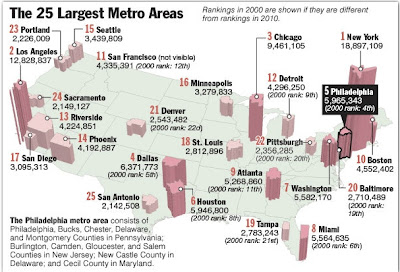 Dallas? Are they counting by number of parking spaces? 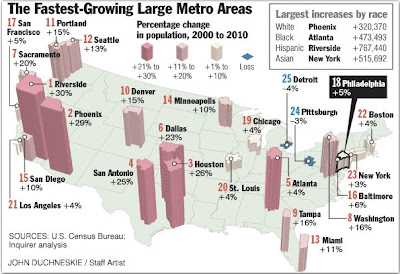 Using county based metropolitan areas creates some size anomalies and makes the maps look a bit goofy. Riverside? Why do they even get their own metropolitan area? It looks like they're including San Bernardino county also, making for one huge skyscraper that is mostly desert.

The north facing perspective also means losing San Francisco and Baltimore behind their larger "neighbors" but if you flipped it around you'd lose San Diego so something had to give. Of course all of this seems pretty insignificant when compared with the largest cities in the world. A little perspective goes a long way.
Posted by Dug at 6:41 AM 1 comments

The London Mapping Festival is an 18 month program(me) of activities that will eventually coincide with the 2012 Olympics. The official launch event is June 6th, however activities have already begun with an exhibit of hand drawn maps at the Museum of London. Readers of the Londonist have submitted their own entries shown online here. Some examples:
"Selected Loos of London." 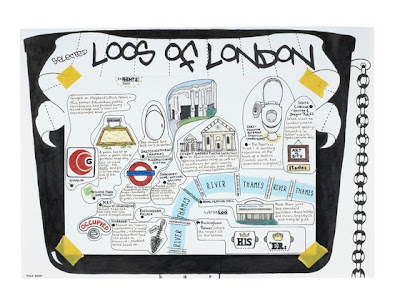 "Brixton as a Tree" 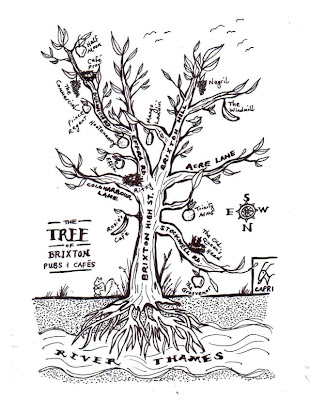 Artist Alexander6's "super-swanky map of Mayfair and all of the area’s ridiculously over-priced luxury stuff..." 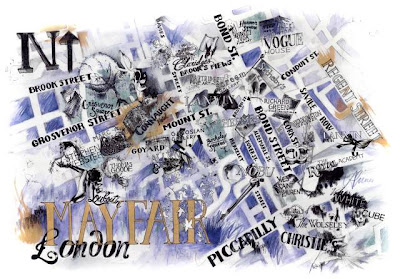 Many more can be found in their online archive.
Posted by Dug at 8:46 AM 0 comments

When Mexico City designed it's subway system in the 1960's there was widespread illiteracy (not so anymore.) They came up with a solution of visual signs such as colors and icons. Each station has a unique logo or icon based on local points of reference, history, nature, etc.

For example the Pino Suarez station icon depicts an Aztec pyramid that was discovered during the construction of the station.

Salto del Agua shows a local fountain and Merced shows a box of apples because it's located adjacent to one of the largest outdoor markets in the city. The stories behind most of these icons can be found by clicking the station name from this wikipedia page.


The image above is a detail from this image from Wikipedia. 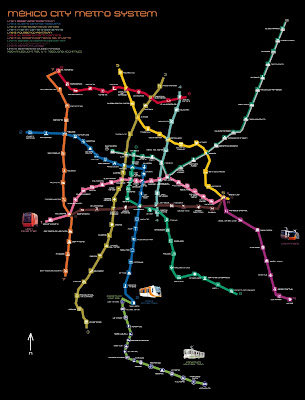 I discovered these icons when I was working on my Maps on Album Covers project. One of my favorite "Rock en Espanol" bands Cafe Tacvba (not a typo) put a fake subway diagram with fake icons on their Cuatro Caminos album. The album is named for a real subway station, but the others on this map appear to be whimsical creations. 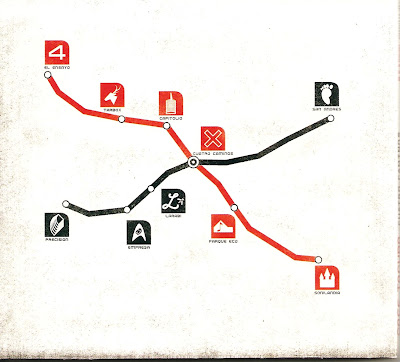 Here is the real area around Cuatro Caminos - the geodesic dome is a former bullfighting arena. 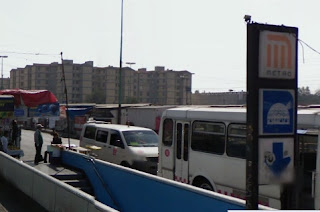 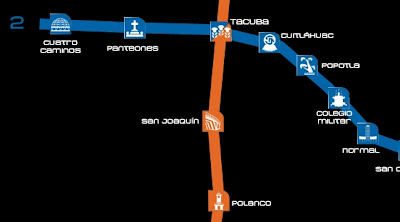