Women in Cartography is an excellent exhibition at the Boston Public Library. It runs until March 27th. If you don't get a chance to visit in person you can view the exhibition online here. In December I got a chance to see it. Here are some of the highlights.

Physiographic Diagram of the Western Pacific Ocean - Marie Tharp and Bruce Heezen, 1971
Geologist/Cartographer Marie Tharp created the first map of the ocean floor. Originally this map was credited solely to Heezen, her research partner. It is displayed on the floor. Here is a picture I took looking down. 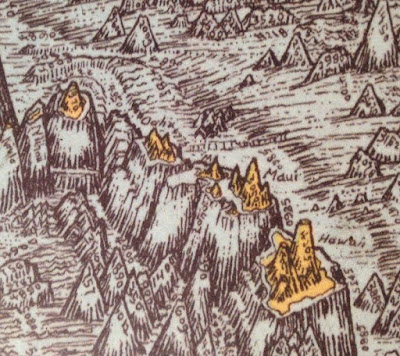 The numbers indicate depths of the sea bottom and height of undersea mountains. The colored areas are land, in this case the Hawaiian Islands rising from the depths of the Pacific.

Mappemonde Projetée sur l’Horizon d’Angers - Céleste Babin, 1839
This double hemisphere map was done by a student in Angers, France. The left hemisphere is centered on Angers and the right one on its antipode (opposite side of the earth.) 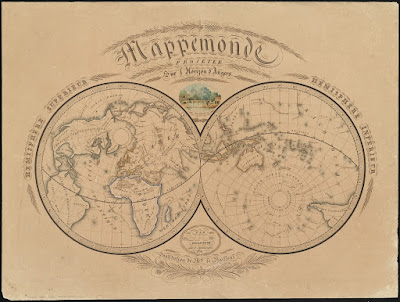 The detail below shows off some nice hand calligraphy and a view from Angers. A General Map of North America …  - Mary Ann Rocque, 1761
Rocque carried on her husband's business after his death. This map was credited to "M.A. Rocque" obscuring (possibly intentionally) that it was produced by a woman. 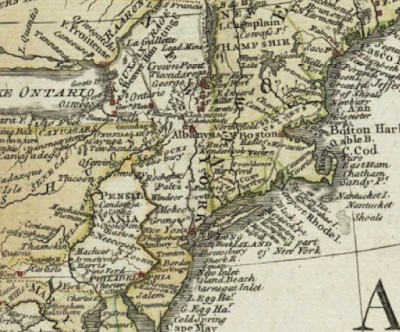 A New Map of ye Seat of War in Italy - Ann Lea and Robert Morden, 1701
Ann Lea also took over her husband's map business after his death. The map shows areas of northern Italy that were fought over between France and the Austrian Empire before Italian unification. 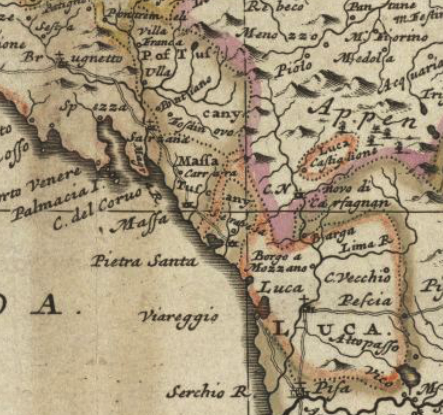 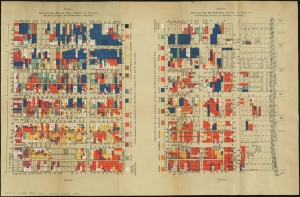 Hull House was a settlement house for female immigrants in Chicago. Holbrook, a house resident designed the map based on Charles Booth's income maps of London (previously mentioned in this post about my visit to Chicago's Newberry Library.) Other house residents helped her gather data for the neighborhood. 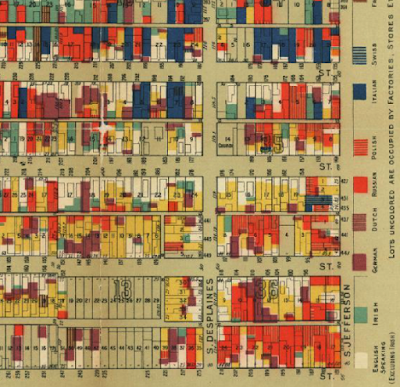 The Attack on Bunker Hill in the Peninsula of Charlestown the 17th of June 1775 - Mildred Giddings Burrage, 1926
Burrage was a Maine-based artist. She created this map/scene using layers of Gesso to build up a sense of topography. 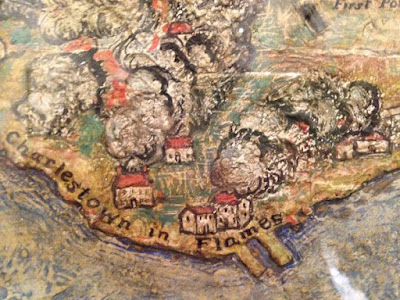 The exhibit concludes with a technology section including the following maps. 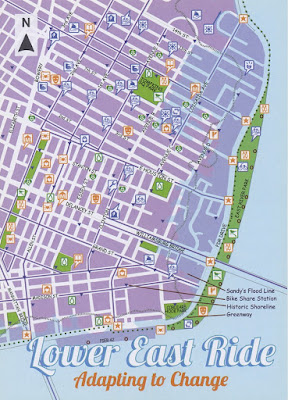 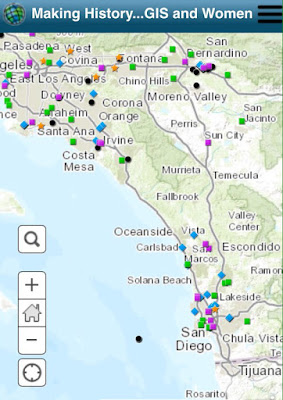 You can see the entire online map here or by clicking the image above. I know some of these people! GIS women rock!

The much maligned Apple Maps has improved its product in many ways. I bought a new computer for the first time in many years so I'm just discovering this not very new feature-the 3D models. They are accompanied by flyover tours of selected cities such as Seattle.

Apple acquired a Swedish company called C3 Technologies, that created 3D models of buildings based on aerial flyovers and guided missile technology. They were then able to quickly create a huge database of building models worldwide. Having tried to do this in SketchUp, (which I believe Google uses for their 3D buildings,) I have an appreciation for how much work each building takes. Unfortunately Apple's maps are only available on Apple devices. Google Maps has more extensive 3D coverage (and available to everyone with a web browser) but Apple's models are clearer and cooler looking. They also draw more smoothly.

Some gimmicks have been added. For example, In London Big Ben will always show the correct time, though it would be more accurate if it was lit up when it's dark there. Also, the London Eye is animated! 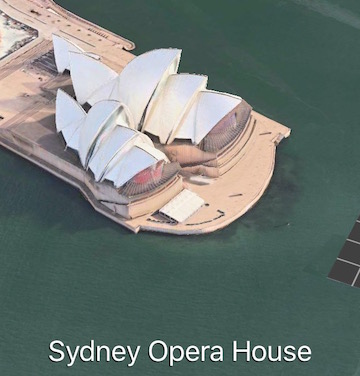 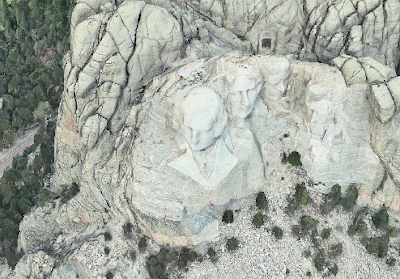 The Bromo Seltzer Tower in Baltimore 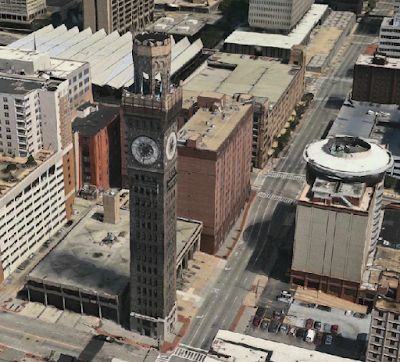 Here is a comparison of Google's vs Apple's 3D view of the above tower. Google's model is on the left. 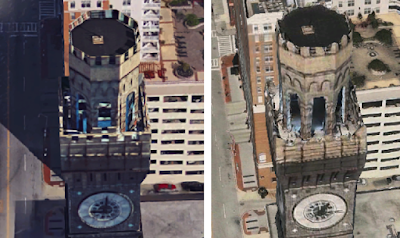 Most articles online about Apple Maps are full of snooty comments about how bad they are. Google still has the edge over Apple Maps in many respects and StreetView is a huge reason to continue using them. However, in recent travels I've found Apple Maps more helpful for locating restaurants, hotels and other businesses. I use both of them (as well as Here Maps and even Mapquest) and do not strongly advocate one over the other but Apple Maps is definitely worth another look.
Posted by Dug at 6:18 AM 0 comments

For four nights, January 14-17th, Lumiere London transforms the West End and King's Cross areas into a festival of lights, art and music. They have created a coupe of maps of the installations and events including this wonderful map of King's Cross. 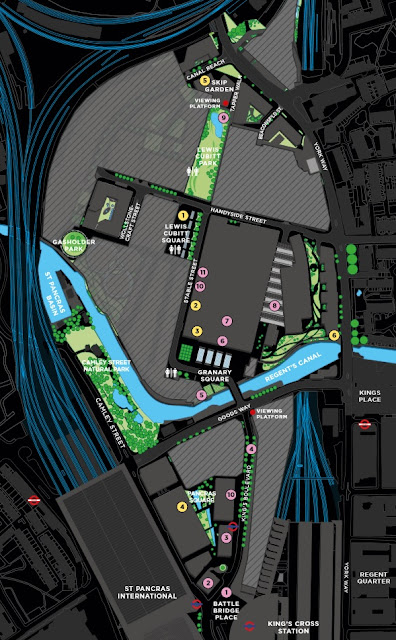 This is a screen grab - for the full map and activities, see the screen programme. The map's dark background creates a nice contrast with the installations and other features. The dark blue rails give off a cool dimly lit effect. The water and vegetation are unrealistically bright but they make the map pop and also much easier to read. The pink dots above are the light installations, the yellow are food and other events.

The citywide map and events can be found on their online brochure. It's much less pretty but useful for navigation. I'm not sure why they didn't do this one in the same night-time style. 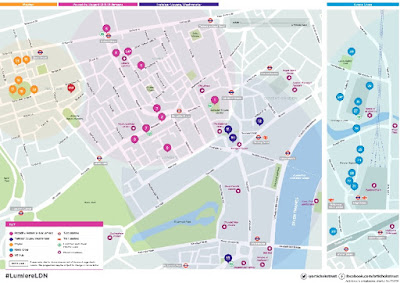 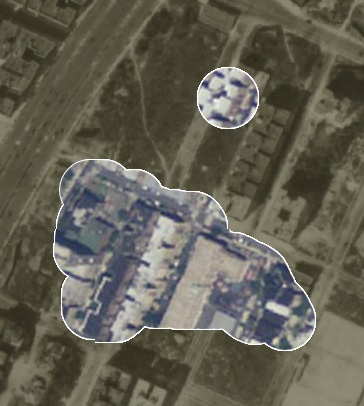 Or you can flip the images and scratch the old from the new. In the picture above, I scratched a modern view of my grandmother's former Bronx apartment building (and adjacent buildings) into what was apparently some empty lots in 1924. Here is an attempt to reverse the process. 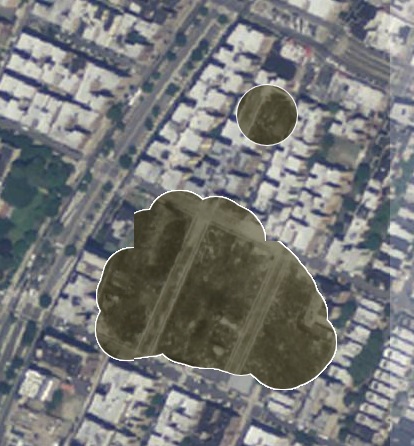 The wonky stuff: The scratching is done using HTML5 Canvas with a jsfiddle called Canvas Eraser. The 1924 map is from the New York Public Library, which has a mapwarper site that allows users to rectify historic map images so they fit over aerials. The images are tiled and displayed using Leaflet. The project is on Github, allowing others to add different historic images or replicate it in different cities. A much more thorough discussion of how this was done can be found on Whong's blog post.

Many of New York's neighborhoods show little change from 1924. The best places to see significant changes are around airports, stadiums (former and current), industrial sites and waterfronts.
Here is the former Polo Grounds scratched out from the current Housing Authority towers. 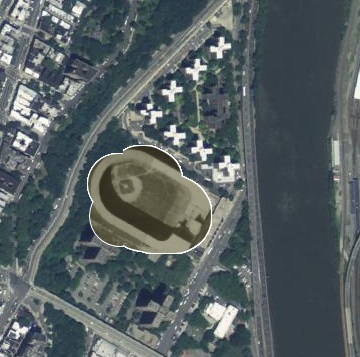 An example from DUMBO: 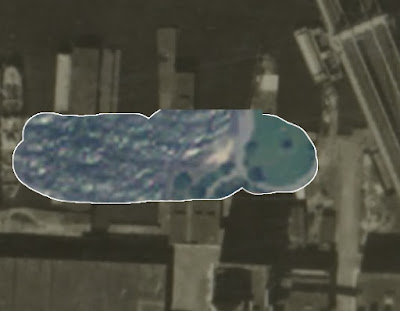 You can also scratch out secret messages: 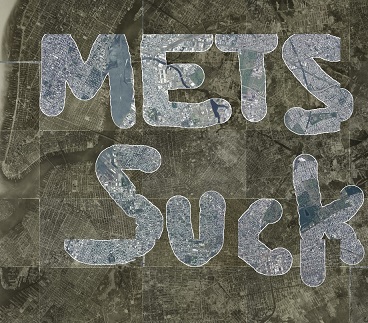 I can't believe I just did that! I'm an awful person !

Location: Carroll Place, The Bronx
Email ThisBlogThis!Share to TwitterShare to FacebookShare to Pinterest 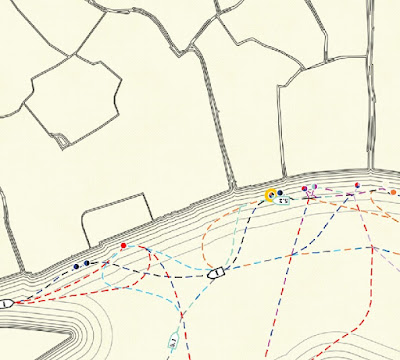 The map uses open data from the water transit company (Actv) to present real time movement of water craft. The boats, routes and stops are clickable for more information.

Or, if you don't feel like interacting you can just kick back and watch the show. The plot's a bit slow but I'm enjoying it.