I Saw a Peutinger Map Replica at ISAW

This weekend I was in New York City and had a chance to wander over to the Institute for the Study of the Ancient World (ISAW) to see their exhibit, Measuring and Mapping Space: Geographic Knowledge in Greco-Roman Antiquity.  The exhibit features a 1:1 scale digital replica of the Peutinger Map, the only known surviving world map from the Roman Empire. This is a medieval era copy of a map from Roman times housed at the Austrian National Library in Vienna. The map is over 22 feet long and only about 13 inches wide. The digital replica takes up one wall of the gallery. Here are some photos from my phone. 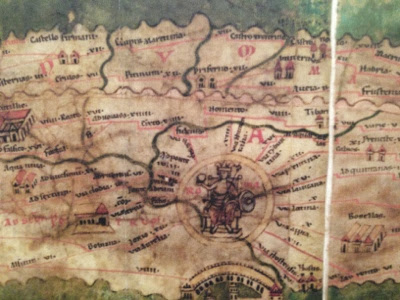 The map is centered on Rome. Above are the roads radiating out of Rome, including the Appian Way. It is meant to show a schematic road network and the extent of the empire's control from the British Isles to India and Sri Lanka. The geography is highly distorted to fit the dimensions with the areas closer to Rome much larger and more accurate. Expanses of open water are reduced to narrow channels. Small cities are represented by twin towers while larger ones show temples and other complexes. The largest cities, Rome Constantinople and Antioch are shown with more elaborate symbols. Below is a section in Mesopotamia. 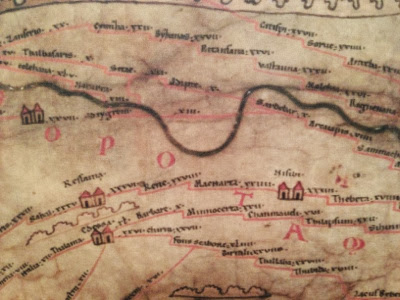 You can see these areas much more clearly on the ISAW map viewer. This allows you to pan and zoom around the entire map, except for the far western edge - missing from the original map. You can also add lines and text digitized from the original for clarity. 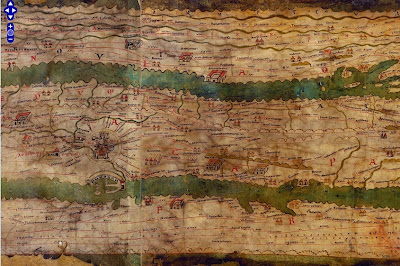 Wikipedia also has a cleaned up high resolution image of the map. The missing western areas were reconstructed by Konrad Miller in 1887-88 and show up with a white background. The original parts of the map are shaded in yellow. The preview image below gives you an idea of the map's crazy dimensions.

The exhibit at ISAW only goes until January 5th, but hopefully the online resources will remain available.
Posted by Dug at 1:02 PM 0 comments

The Way I Tauk

The New York Times has an interactive quiz where you can see where you are likely to be from based on your speech. Here are my results: 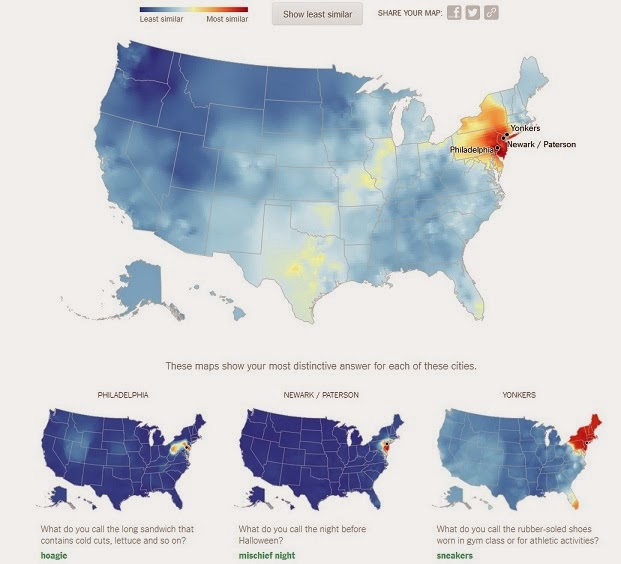 I was born in New Jersey and spent my formative years in Philadelphia and upstate New York* so this is pretty good. The maps at the bottom show your "most distinctive" answers. Sneakers does not seem very distinctive to me and hoagie is kind of a trick question. To me a hoagie is a certain type of sandwich, whereas others are just subs. I would never eat a tuna hoagie though some people might call it that.

Also interesting is the results of where your speech is the least similar. I am clearly NOT from Spokane. There is certainly a pattern here. 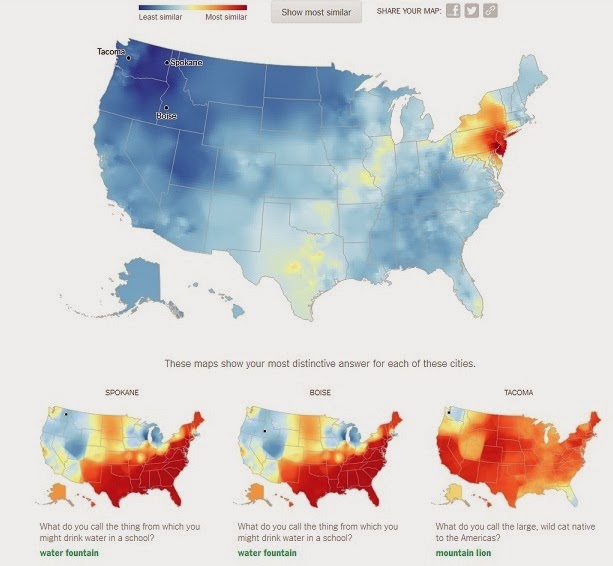 Don't be caught saying "mountain lion" in Tacoma! Unless referring to an Apple operating system.

The quiz is based on the Harvard Dialect Survey, a linguistics project begun in 2002 by Bert Vaux and Scott Golder. The original questions and results for that survey can be found on Dr. Vaux's current website.

From the New York Times Site:

The data for the quiz and maps shown here come from over 350,000 survey responses collected from August to October 2013 by Josh Katz, a graphics editor for the New York Times who developed this quiz. The colors on the large heat map correspond to the probability that a randomly selected person in that location would respond to a randomly selected survey question the same way that you did. The three smaller maps show which answer most contributed to those cities being named the most (or least) similar to you.

If you're wondering where you are from, take the quiz here.

*Yonkers in NOT upstate New York despite what Longislanders might think.

Location: somewhere north of Philadelphia
Email ThisBlogThis!Share to TwitterShare to FacebookShare to Pinterest

Map Ties and Other Gifts

Personally I hate ties and wear them as infrequently as possible. However, these map ties are pretty cool. Who wouldn't want a tie with a vintage 1868 pictorial map of Iowa City? 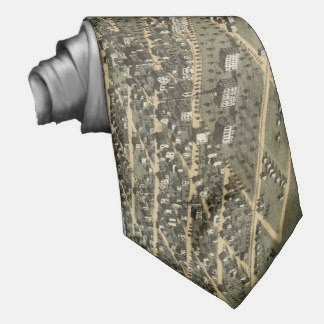 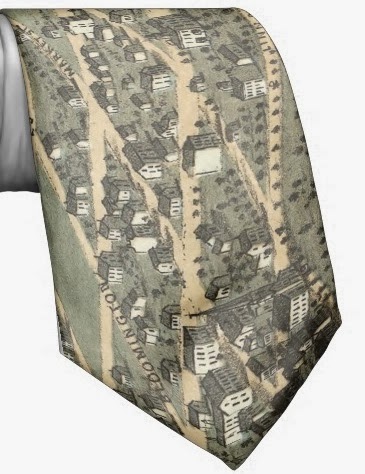 There are lots of vintage and other unusual maps listed. I like the weather map one.

Of course these ties would look great with a pair of cuff links. 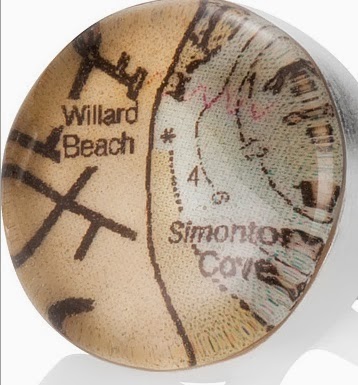 South Portland, Maine if you were wondering.
Posted by Dug at 7:06 AM 0 comments

Columbia University's Gulf/2000 Project was created as a service to scholars, journalists, politicians and other professionals working in the Persian Gulf region. The web site for this project contains some fantastic maps created by Dr. Mehrdad Izady showing population, religion, language and other divisions that affect the region.

His large map of the Islamic World is particularly striking. Many of the recent conflicts in the world have occurred along the boundaries of Islam and other religions such as in Mail, Nigeria, Central African Republic, Sudan/South Sudan, the Caucasus region and in parts of India and Pakistan. 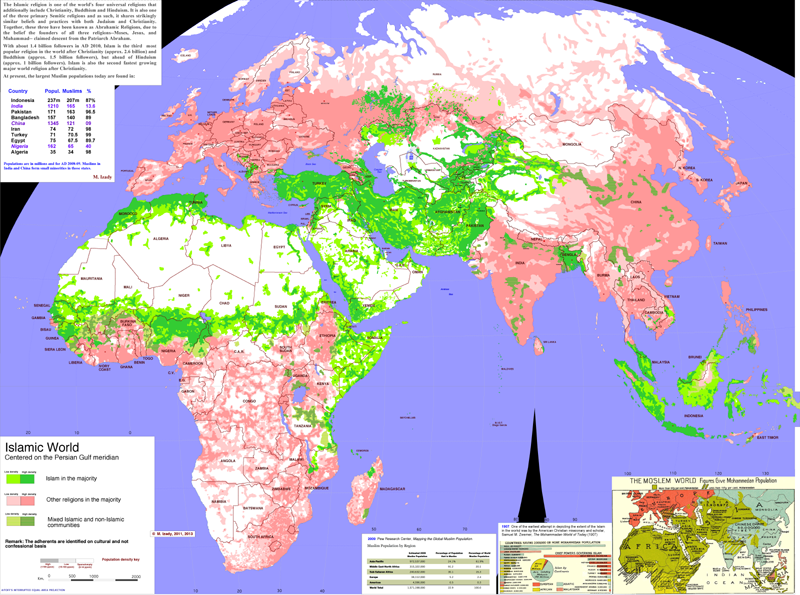 The lower right corner of the map contains a 1907 map depicting the extent of the "Moslem World." The overall pattern is largely the same as today.

"Syria Ethnic Composition" is another very detailed map showing how diverse that country is. The text on the right describes how much of this complexity is lost when language is considered the defining ethnic characteristic. The commonly used "Arab" ethnic stamp glosses over these divisions but the current conflict in Syria has shown their significance. 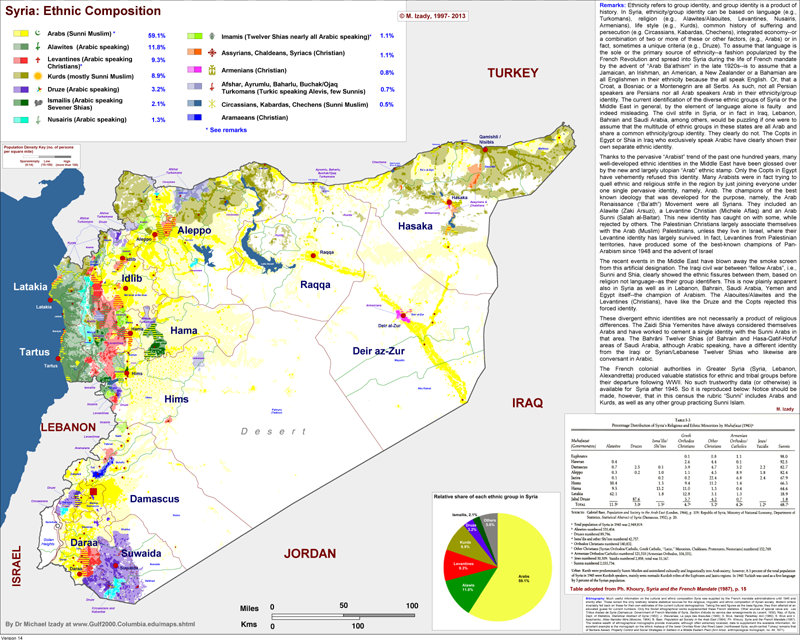 The maps page has many other highly detailed maps not just of the Gulf region, but the entire Middle East as well as parts of Africa and Asia. You can spend hours looking at these. I did.
Posted by Dug at 8:13 AM 2 comments

Location: Syria and other places
Email ThisBlogThis!Share to TwitterShare to FacebookShare to Pinterest

Friend of the blog Michael Karpovage has won the Best Recreational/ Travel Map in the 40th Annual Cartography and Geographic Information Society (CaGIS) Map Competition (2012). I was waiting for some exciting announcement from CaGIS but the gallery of winners is merely a list - no pictures or even links to see what these maps look like. Here are some pictures lifted  from his website. 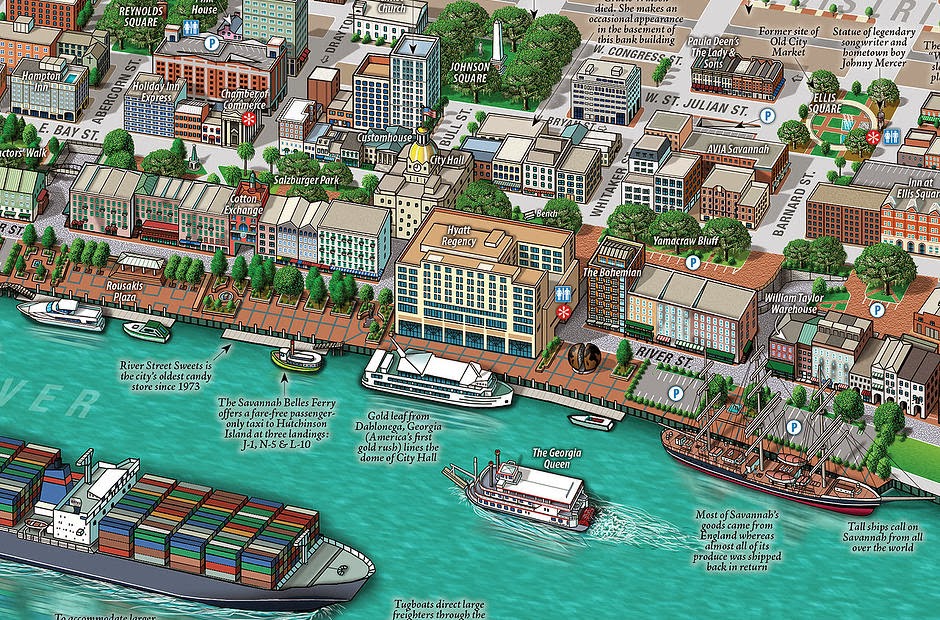 The image above shows Side A highlighting the historic district. Here is a closer detail showing the area where we stayed recently. 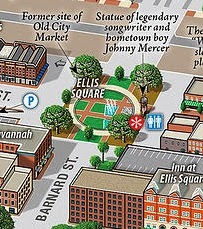 Below is Side B showing a broader view and listing the attractions. 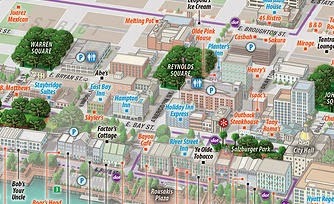 Finally, a detail showing Mr. Karpovage hiding in the shadow of an oak tree.

Congratulations Mike!
Posted by Dug at 7:04 AM 0 comments