Range of the German 80-Mile Gun

This map, via Project Gutenberg, shows the battle lines of April 10, 1918 and the areas of France and Britain that could be reached by the German guns that had been used used to shell Paris a few weeks previously. 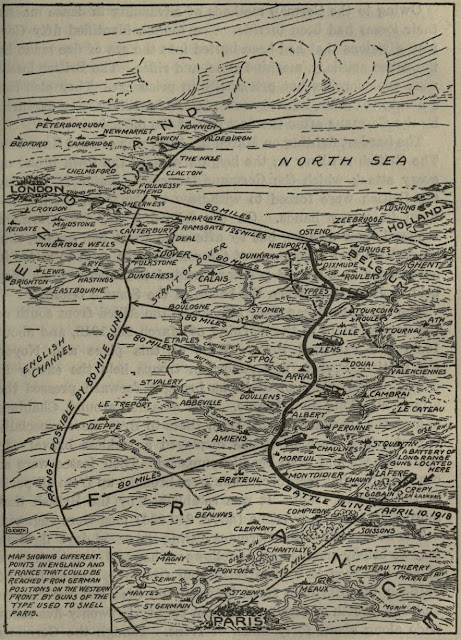 The map is from The Story of the Great War. This quote provides context.

"The Germans sprung a new form of frightfulness on the Allies when at 8 o'clock in the morning of March 23, 1918, they bombarded Paris with long-range guns. At intervals of about twenty minutes shells of 240 millimeters (about 9.5 inches) reached the capital, killing ten persons and wounding others. The shortest distance from Paris to the front was over sixty-two miles. The first daylight aeroplane raid followed this bombardment, but did little damage. Public interest was centered on the mysterious gun that could drop shells on the city from such a great distance. Pieces of shells examined were found to bear rifling marks showing that they had not been dropped, but were fired from some kind of gun. Later the French located several of these "mystery guns," and some were destroyed. The only purpose they could serve was to terrify the people of Paris, otherwise they were of no military importance."

Here's a zoomed in view to better appreciate the details. 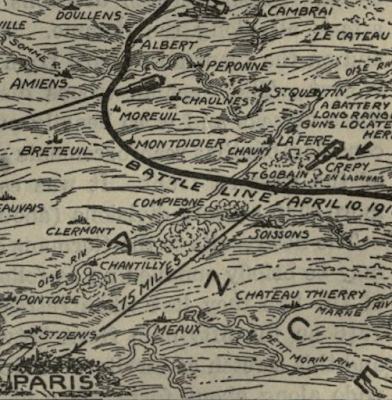 The Map that Claimed the West

I had a chance to look at and photograph this map up close at the Map & Atlas Museum of La Jolla.

Melish had the benefit of information from Lewis and Clark's recent expedition to fill in many details. Here rivers with fancy names like Philosophy (Willow Creek) and Philanthropy (Ruby River) make their way to the Jefferson and eventually Missouri Rivers.
Sometimes the details are a bit exaggerated.

Here are some very detailed annotations along the Illinois-Iowa (Missouri Territory at the time) section of the Mississippi River.
In addition to the map's historical significance there are various other cartographic curiosities such as the incorrectly angled Lake Michigan, missing Illinois completely and putting Michigan on a diet. 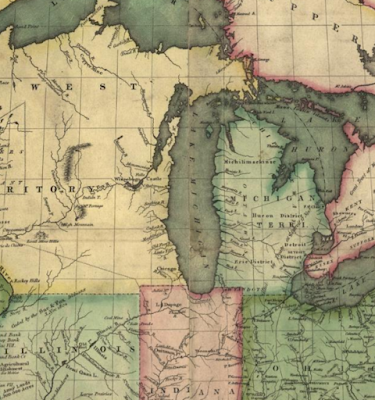 Chicago's there, just in the wrong state. Here is another curiosity

A theorized link to San Francisco Bay via the Rio Buenaventura (Green River in Utah) - here is a zoomed out look. 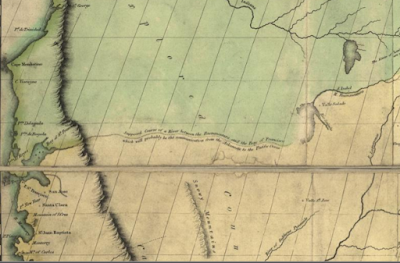 The entire map can be browsed at World Digital Library

Last month I visited the Map & Atlas Museum of La Jolla. They have an impressively large collection of original maps and many of them are of significant historical importance.

For example, here is one of the earliest recorded maps - baked onto a clay tablet.
It shows a parcel of land with ownership and dimensions in cuneiform. On the back are field measurements. This could be a legal document or may have been used as a teaching tool for surveying.

Here is a world map by Antonio Floriano (ca. 1555) using polar projections from the north and south poles. I took most of the following pictures on a phone so try to ignore the glare and reflections. Where possible I will provide links to better images online. 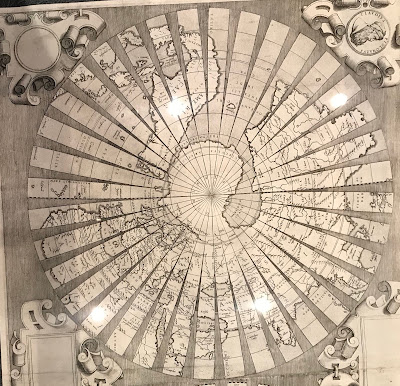 Each hemisphere is divided into 36 globe gores and therefore it was likely to have been designed for making globes. A better image can be found at The Vintage Map Shop. Here is some detail from the eastern Mediterranean. 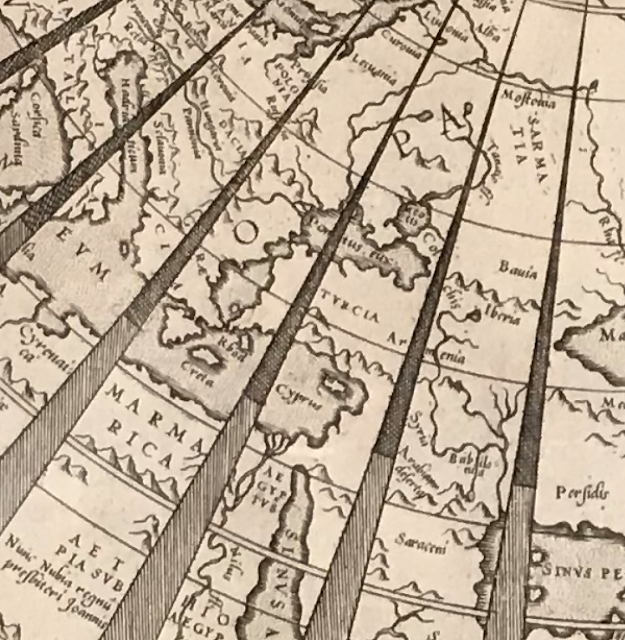 A very different world map from a similar era (1581) is Heinrich Bünting's World Map.
This is a figurative map meant to represent biblical geography with the cloverleaf shape possibly reflecting the Trinity. A colored version can be seen here.

Leo Belgicus maps.
These maps represent the "Low Countries" of the Netherlands, Belgium and Luxembourg as a lion, partially because the most of the provinces of these countries featured lions on their coats of arms. I did not get a photo of the whole map so I used an online example above. I did, however get a nice detailed close up.
I love the way the Rhine and Meuse Rivers flow over the paw like blood vessels. The paw scratching at "Colln" (Cologne) is a nice touch.

Here is a detail from Map of the Caribbean (Spanish Main) by Peter Martyr, 1511. Martyr was a friend to Columbus and the other explorers of the era. This is the first printed map devoted to the Americas. Martyr was also the first to have used the concept of a "western hemisphere" though he was not sure whether the mainland areas of South America were attached to India or not. Derived from confidential Spanish sources, it was very accurate for the time and also may have landed him in some trouble. The same year, King Ferdinand outlawed giving maps to foreigners.
I love the exaggerated detail of the coastlines.

More to come in a future post - stay tuned!

South and Central America According to Fox News

I think this map is old but has some new relevance due to this recent Fox News screen shot, as summed up in a tweet by Atanas Entchev.


The map is credited to the Dispropaganda site but I could not find it there.
Posted by Dug at 5:56 AM 0 comments