A hundred years ago today the fighting stopped - temporarily. The Christmas Truce was a series of ceasefires along the Western Front. World War I had degenerated into a stalemate and trenches were dug along the front lines. Opposing trenches were often very close and after a couple of months of living in close proximity under miserable conditions, a degree of empathy arose between enemy combatants. Soldiers sang Christmas Carols to each other across the trenches and eventually emerged to help each other with burials, exchange rations and play football.

This map from Silent Night: The Story of the World War I Christmas Truce* by Stanley Weintraub shows the location of the front lines at the end of 1914.
Many soldiers on both sides felt little reason to hate the enemy troops. Some of the Germans had worked in England before the war and many of them knew enough British culture to sing familiar songs to the "enemy" troops. Military and political leaders were deeply troubled by this lack of hostility and actively discouraged future truces, punishing those who attempted them.

If the truce was in part a protest by the troops about the futility of their situation, the map below (from a military history site) justifies their sentiments. It shows the Western Front in the summer of 1916, almost completely unchanged after a year and a half of suffering and death. The front lines changed little until near the end of the war, almost four years after the Christmas Truce. 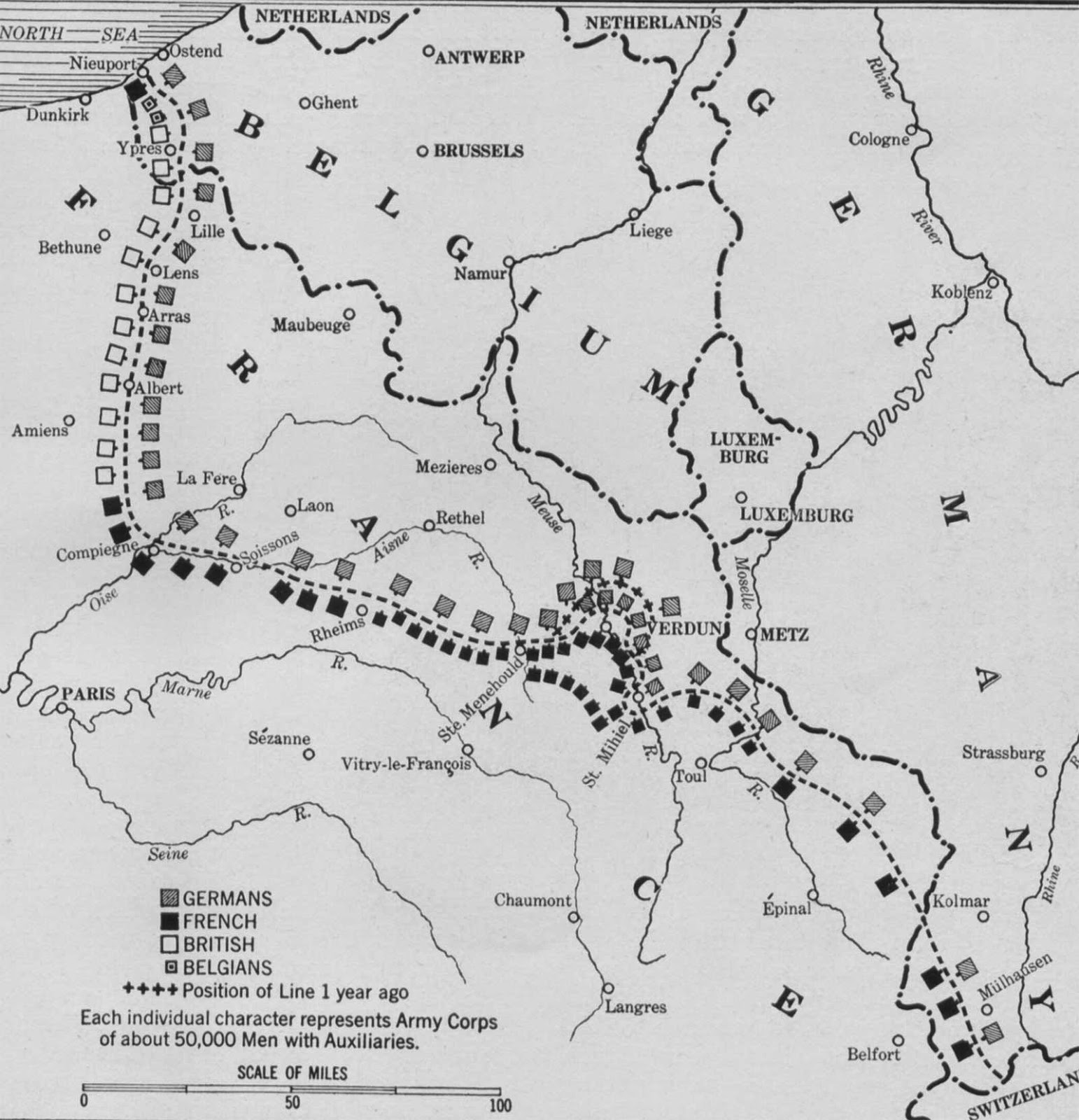 *Much of the information above is also from Weintraub's book-link here.
Posted by Dug at 5:35 AM 0 comments

Location: Flanders
Email ThisBlogThis!Share to TwitterShare to FacebookShare to Pinterest

In 1914 Ernest Shackleton sketched out his plan to cross Antarctica on a menu card for the London Devonian Society's Annual Dinner. 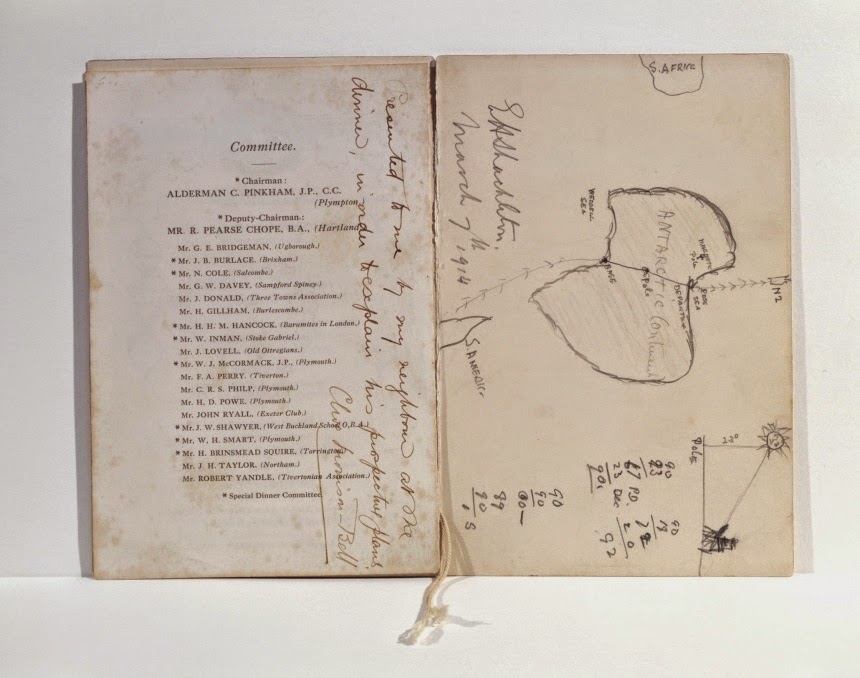 Shackleton served on two previous Antarctic expeditions but Roald Amundsen was the first to reach the South Pole, in 1911. After failing to be the first at the South Pole, Shackleton switched his focus to crossing the Continent, from the Weddell Sea to the Ross Sea. Here is the map in as much detail as I can find it online. 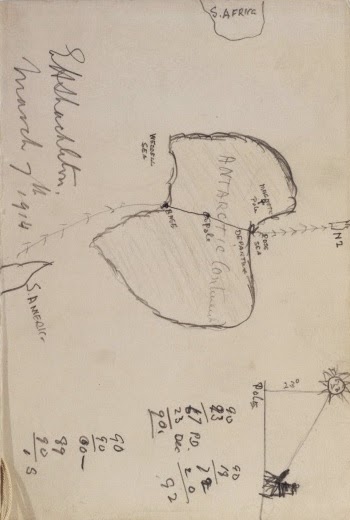 The Imperial Trans-Antarctic Expedition left Buenos Aires, Argentina on October 26, 1914 hoping to reach the continent by December and the South Pole by Christmas, 1914. The ship got stuck in ice in the Weddell Sea for almost a year and was finally crushed by the ice. The last contact was made from South Georgia on December 3rd, 1914. Here is a map from a 1916 Daily Telegraph article discussing the lack of news from the Expedition - via xefer. 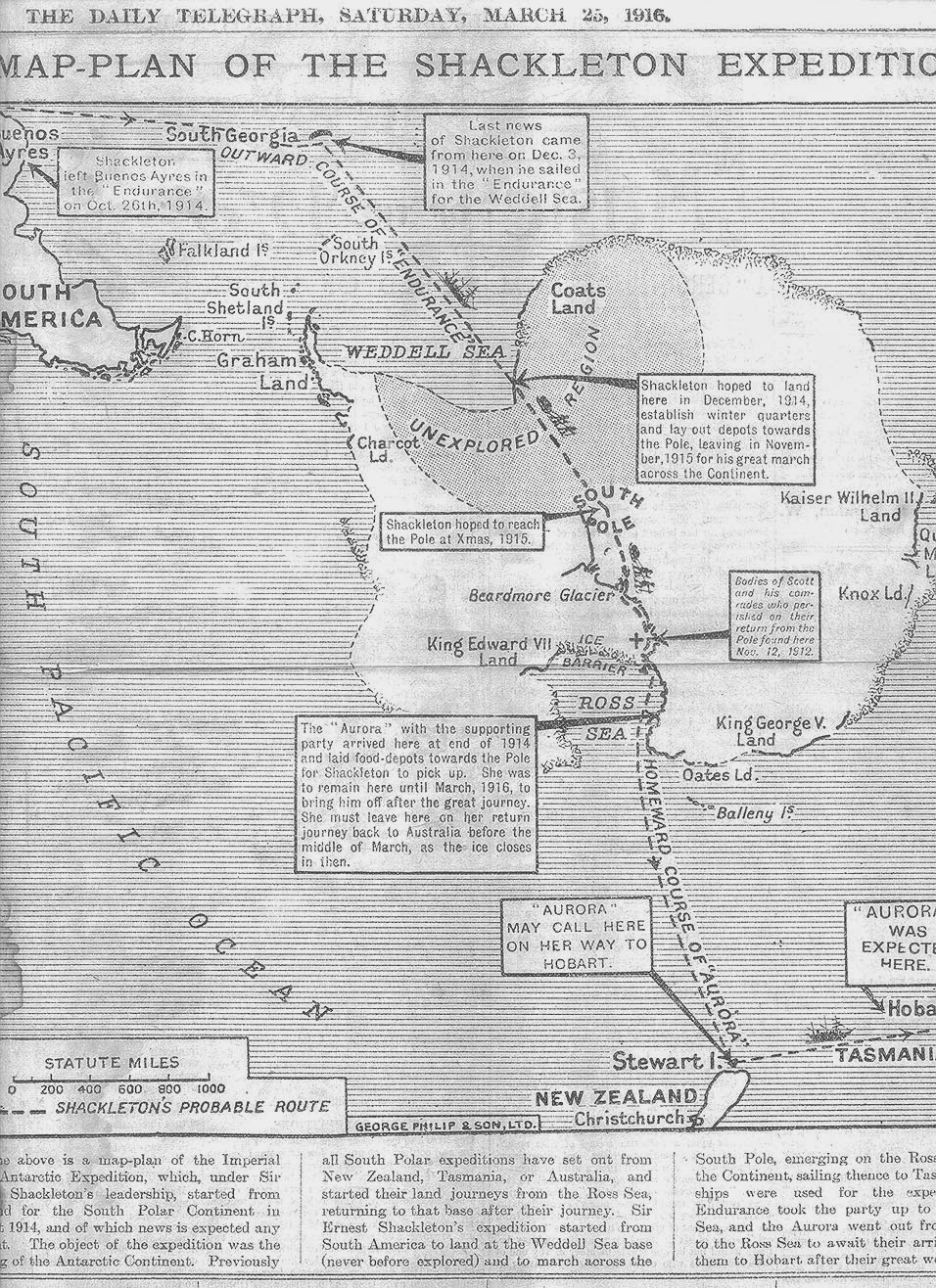 The party endured a horrific multi-year rescue but they all eventually returned home alive. For more details see Wikipedia, or wait for the movie Endurance to be released next year.

In 1914 London's Underground was frequently overcrowded, filthy and confusing. Frank Pick, the network's commercial director, wanted to lighten up the often tense atmosphere. He hired MacDonald Gill to design the "Wonderground" map, a whimsical cartoon map of the system full of jokes, puns and various other cute touches. 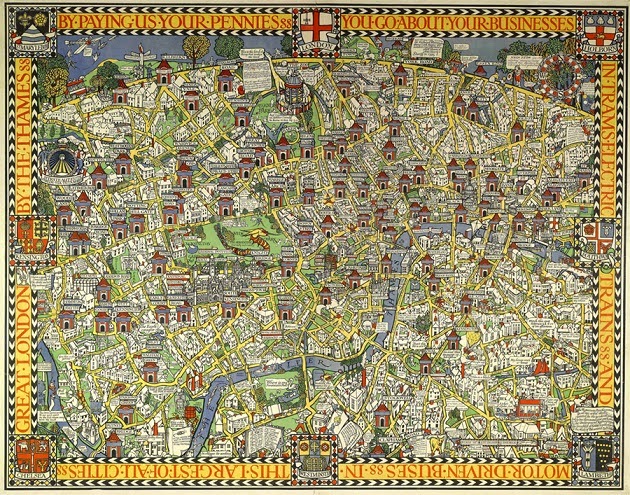 Copies of the map were hung in every station and it became an instant hit. There were reports of people missing trains, sometimes intentionally, because they were too busy looking at the details. The map makes London look like a cheerful medieval town, the feeling partially achieved by the coats of arms along the map's border and the fantasy architecture of the station entrances. 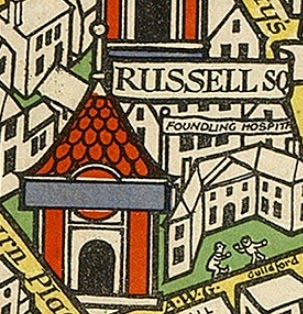 Here's an example of one of the puns, where the giraffe is "fed up." 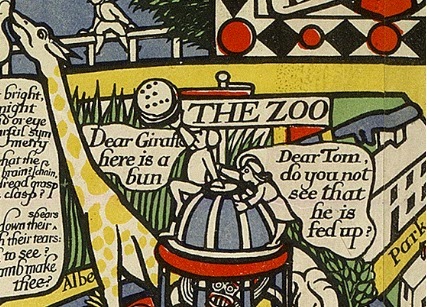 In another joke, Russia is listed as one of the "villages." 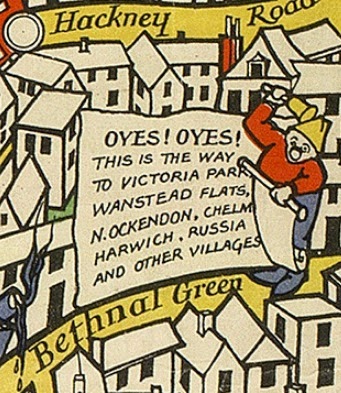 Here, we have a poisonous reservoir and a horse that takes solace in carrots. 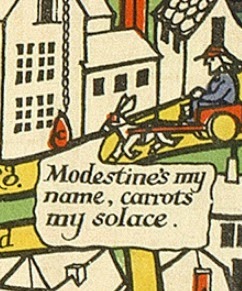 On the eve of World War I, the map took on many of the political and cultural events in a lighthearted fashion. For some soldiers leaving for the front, this may have been their last impression of London.

The map can be explored from this BBC News Magazine page. 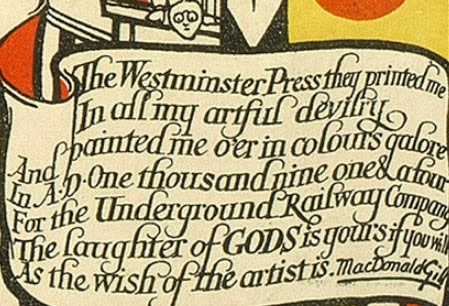 Aaron Reiss put together an interactive map and article for the New Yorker on New York's "shadow transit" system. It consists of dollar vans and unofficial shuttles that serve areas of the city poorly served by public transportation. 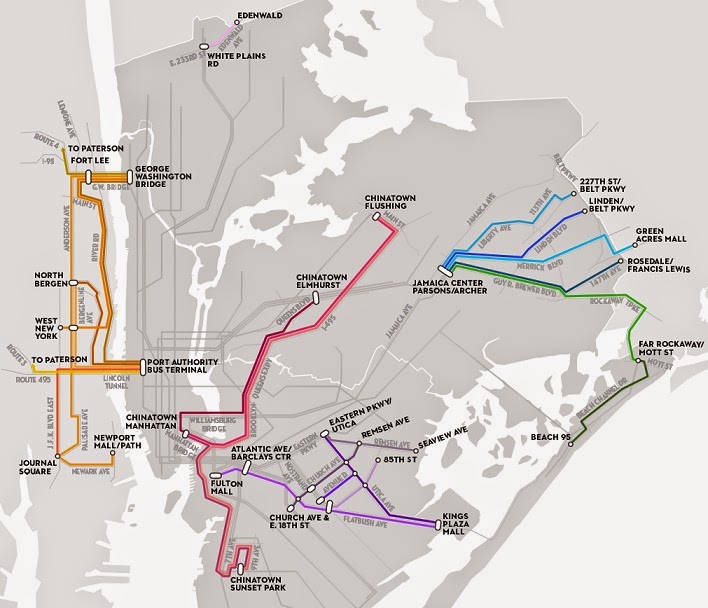 Dollar vans began running as a result of the transit strike of 1980. From the article:


Today, dollar vans and other unofficial shuttles make up a thriving shadow transportation system that operates where subways and buses don’t—mostly in peripheral, low-income neighborhoods that contain large immigrant communities and lack robust public transit. The informal transportation networks fill that void with frequent departures and dependable schedules, but they lack service maps, posted timetables, and official stations or stops. There is no Web site or kiosk to help you navigate them. Instead, riders come to know these networks through conversations with friends and neighbors, or from happening upon the vans in the street.

Reiss spent a year riding these vans and put together summaries of the major areas served along with videos taken from the vans. The videos and descriptions can be accessed by clicking each area on the online map. The routes continuously change according to demand. This makes it impossible to show all routes but the "major lines and connections" are shown here.