Map of the Week-Children are Colorful and Beauty

Every couple of years the International Cartographic Association organizes the Barbara Petchenik International World Map Design Competition for children 15 and younger. Entries are archived online by the Carleton University Library in Ottawa, Canada. You can see all kinds of fun maps on this page. Many of them are cliched and similar looking but there's also lots of clever ideas in these young minds. 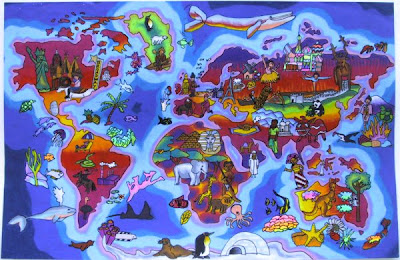 This entry is entitled "The world is colorful and beauty" and was done by Ferina Tjahyana from the Pelita Harapan Junior High School in Tangerang, Indonesia. She was 13 at the time this map was done (2003).
Posted by Dug at 5:45 AM 6 comments

Map of the Week-Corporal Punishment

Human Rights Watch is focused on trying to end corporal punishment in the United States. It is already banned in most states but still prevalent in many. See any pattern in this map?

Map of the Week - Georgia's Abkhazian and Ossetian Problems

It's been tough finding good maps that really show what's going on in the Caucasus region. This CIA map illustrates why the South Ossetian and Abkhazian people want independence from Georgia - though I'm not sure that being a part of Russia is really what they want either. The Abkhaz are linguistically unique while the Ossetians not only have a different language but are also not considered to be "Caucasian". The map nicely illustrates how difficult it would be to create contiguous countries in the region. Also note the proximity of other recent spots of conflict such as Chechnya, Dagestan and Nagorno-Karabakh in Azerbaijan. There are a couple of versions of this map on the web but Wikipedia has the best one I've seen. 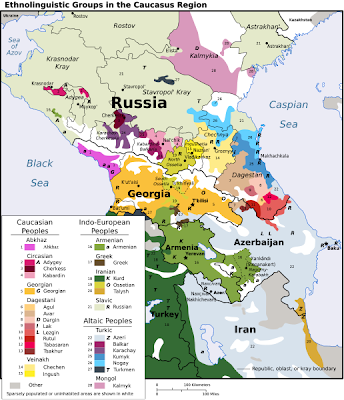 For a nice, detailed general reference map of the region click here. 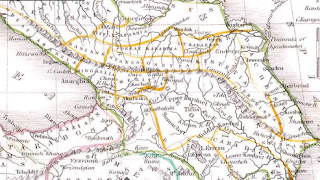 This is an interesting historical map of the region produced by American cartographer Thomas Bradford in 1835. Clicking the image will bring up a window so you can zoom and pan to get more detail.
Posted by Dug at 9:19 AM 1 comments

Friday is 8/8/08 and 8 being a very lucky number to the Chinese it will be the starting date for the Beijing Olympics. The Beijing 2008 website has this nice interactive map, showing the location of the venues. 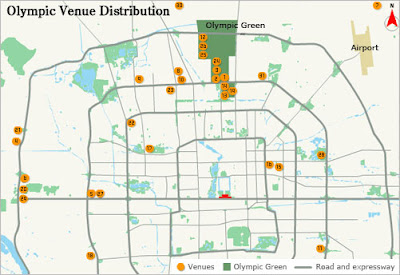 You can mouse over the dots to get basic information and a click on them will get pictures, diagrams, architectural drawings, links to schedules, game rules and much more. What's lacking is a mileage scale so it's not clear how close these places are to each other. Also some transit and/or parking/driving tips would be helpful. You can find that information in the "Spectator Guide"s but they could have put it in a more obvious place.
Hope your favorite country proves their athletic prowess to the world!
Posted by Dug at 7:43 PM 2 comments