It's probably too late to sound the warning on Thanksgiving holiday travel but don't do it! The latest New York Times map shows hot spots all over the country but especially in the Upper Midwest and other rural areas. 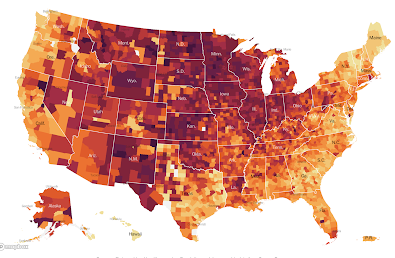 Their site also has maps showing total cases and deaths by county those these are really just population maps, as xkcd fans love to point out.. 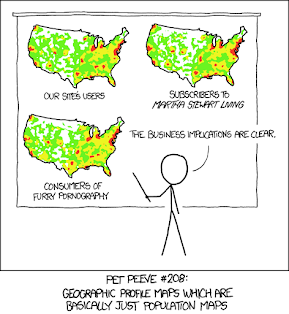 The per capita case map tells a much different story.
The situation in nursing homes is getting bad again, 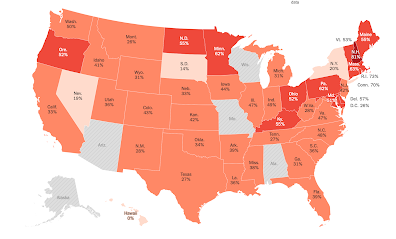 and also at colleges. 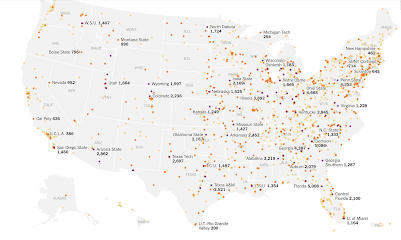 For more infographic fun you can see how the states with the fewest restrictions have the worst outbreaks - surprise! Have a good, safe holiday and don't go anywhere!

Last month I attended my first conference of the North American Cartographic Information Society (NACIS). One of their traditions is to create a Map Quilt. This year, in honor of the society's 40th anniversary the quilt was made up of submissions from past NACIS presidents. The theme is Milwaukee- where NACIS is headquartered.

Each quilt square is another take on mapping Milwaukee. Here are some examples - many interesting approaches to the same place. 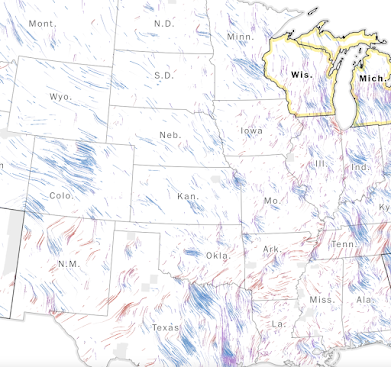 The red "gusts" to the right show greater Republican support from four years ago while the blue leftward lines show greater support for Democrats. Purple vertical lines are places that saw little change. The legend is complicated but the patterns are pretty clear. 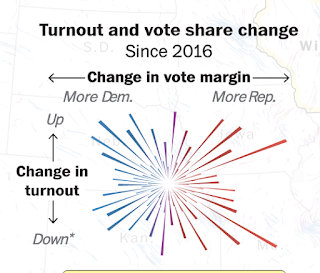 The leftward drift in the Great Plains and diverging areas of the south central states are patterns you won't see on a typical red/blue map. By contrast here is the same map showing the 2016 changes (from 2012). 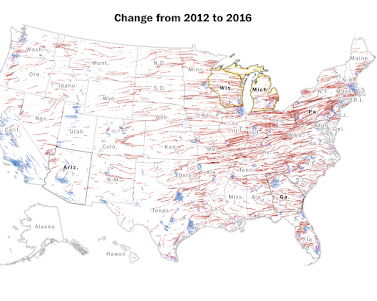 This is a nice "scrollytelling" article. When you scroll down enough you can see the two maps animated.

The New York Times, in addition to the usual red-blue offerings has this size of lead map. 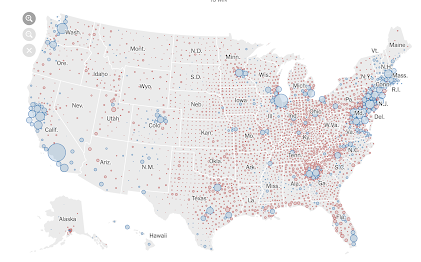 One of the best things about this approach is the subtlety of the colors. The clever choice of size of lead makes it so the viewer has a better sense of the population and how certain states were won or lost. Some of the biggest counties have smaller circles because the size of the lead was less than in other places. Largely empty counties are de-emphasized because land doesn't vote. 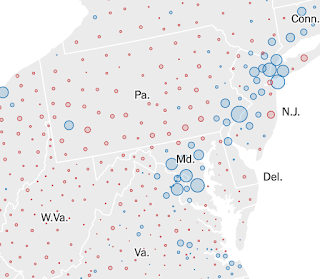 As this election insanity wears on here is a previously posted reminder that land doesn't vote, people do. Yes, I have posted this before but it bears repeating.

You will probably see many very red looking maps over the next week or two. Karim Douïeb created this visualization (from the 2016 election) along with a set of visualizations you can step through here. They include a nice map to cartogram transition.