Gyres are where currents gather large patches of garbage. Much of this garbage is non-biodegradable plastic that is often consumed by fish and other tasty critters. The future effects of all this plastic on humans is not completely understood but it's not likely to be nearly as pretty as the map. Here's a detailed view-a good example of how less can be more in a map. 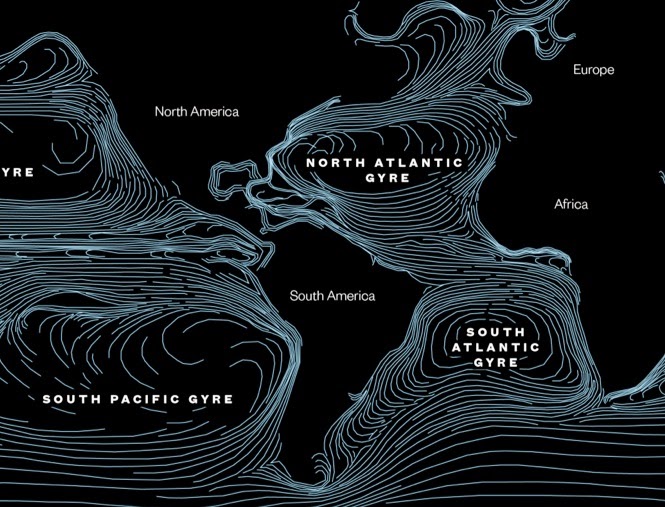 Ukraine's National Security Information and Analysis Center puts out and updates these maps showing the situation in eastern Ukraine. Click to see a larger version. 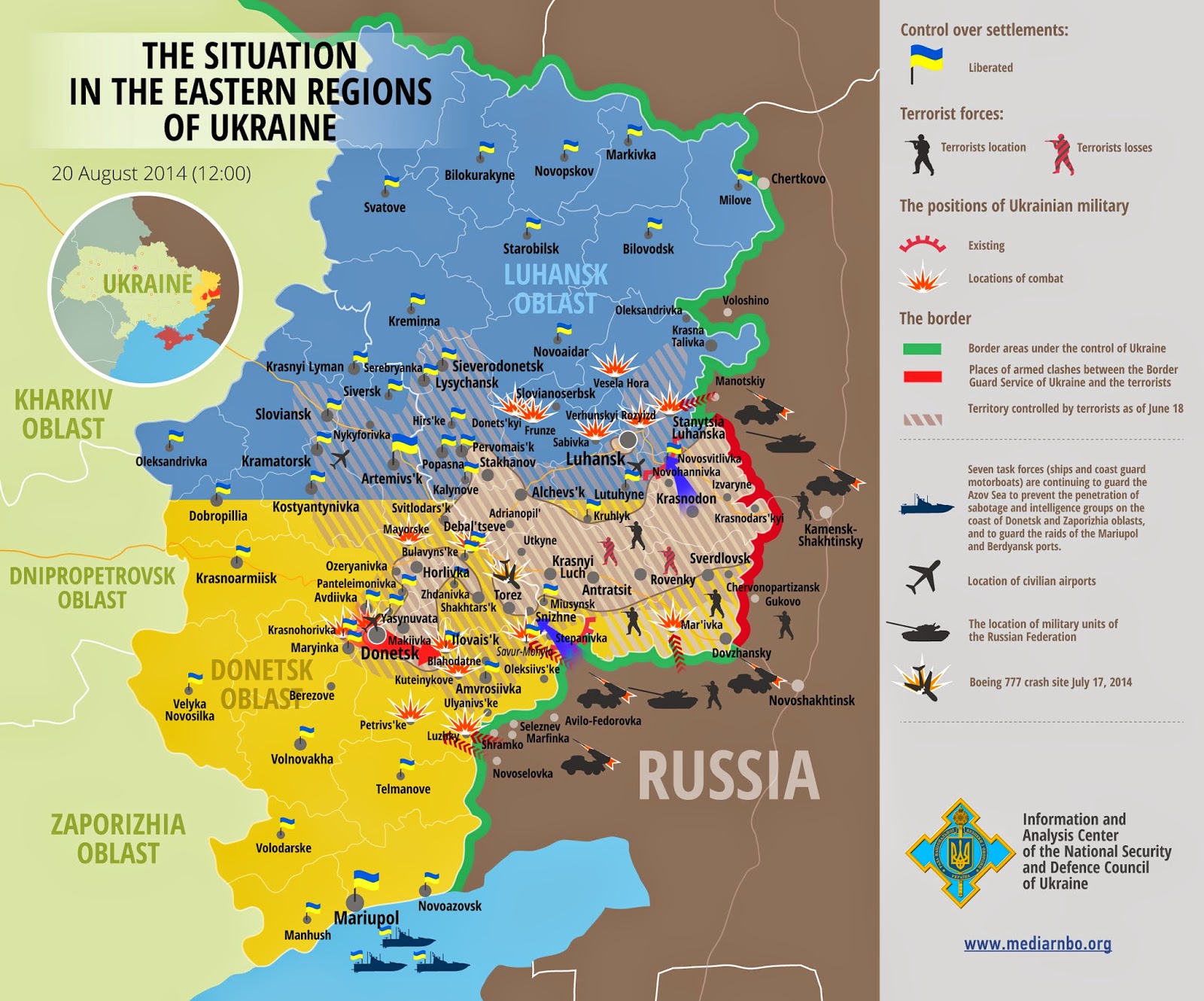 There's a lot to like about this map. It is busy but they keep it legible by using clean fonts and symbols. The small circular locator map uses a mostly consistent color scheme though the Crimea color is not explained. The legend is also pretty good, though not everything on the map appears in the legend.

Now the bad parts. First there's the obvious language of propaganda. Regardless of how anyone feels about the politics there, the use of terms like "liberated" and "terrorists" dumbs down the map. Then there's the color problems. It's a cute idea to use the blue and yellow Ukranian flag colors to represent the area but it also makes for a communication failure, especially if you don't realize what they're trying to do. After all, most people outside of the region probably wouldn't recognize those as the flag colors. Instead it creates the illusion of two separate regions divided by a curiously straight line. Also, the locator map only uses yellow for this region. One could also ask why the flag colors do not extend to the rest of the country. I guess they are trying to spotlight the eastern oblasts and make sure you know in no uncertain terms that these are part of Ukraine. Also, the use of flags to represent the "liberated" settlements should make this color scheme unnecessary.

The territory controlled by the pro-Russian, or "terrorist" forces is also confusing. Why is some of the area outlined with a background color and some of it just lines or varying darkness? There are also unexplained blue and red arrows and differing flag sizes. I can guess what all of these items mean but I may be wrong.

I want to like this map because it attractively conveys a lot of information, but it needs work. Still, it's much better than this ugly thing. 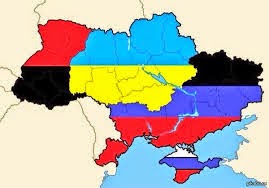 SB Nation put out "hate" maps for the major team sports in the United States. The data comes from asking Reddit users their least favorite team. The sample size is much smaller than the recent New York Times maps showing favorite teams. The data is much less granular (by state instead of by zip code.) Also these maps are not interactive - the NY Times map lets you hover over a county to see the stats. In other words, a much inferior product but since hatred is fun, let's have at it: 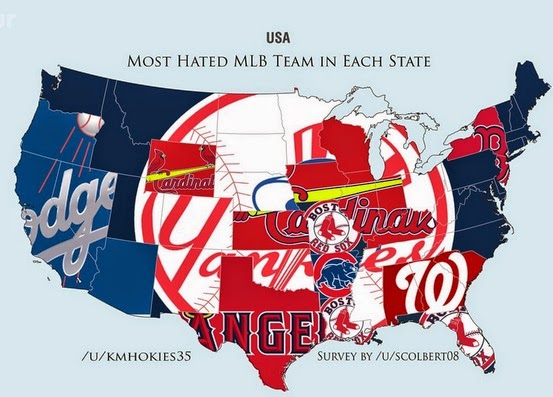 The implication here is that everyone hates the Yankees except on the west coast and a few other regional pockets (such as New York.) However, a look at the New York Times map shows that the Yankees are also the default team in most areas that do not have a nearby team. 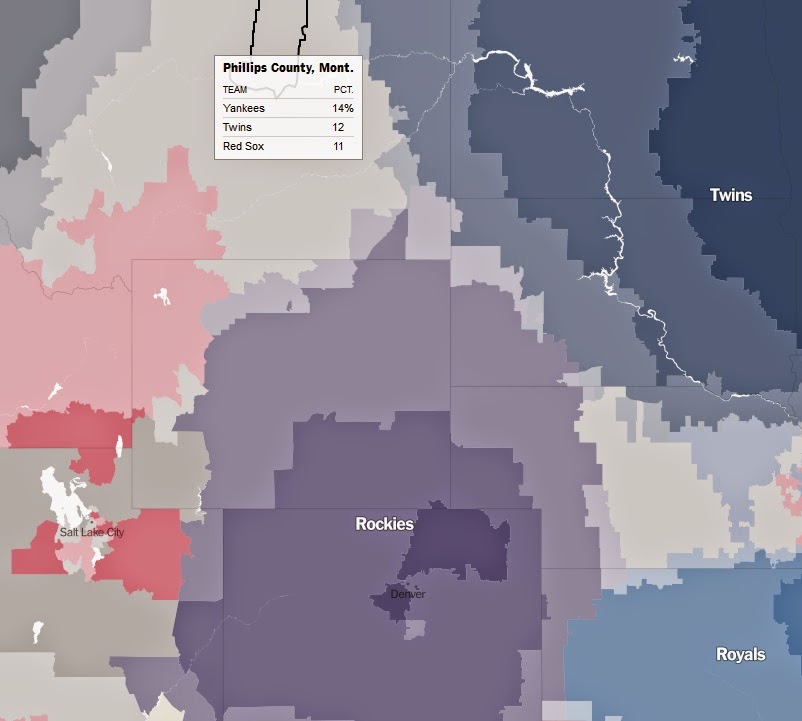 This shows the problems of making these kind of assumptions. That said, lets assume away! Here's the NFL hate map. 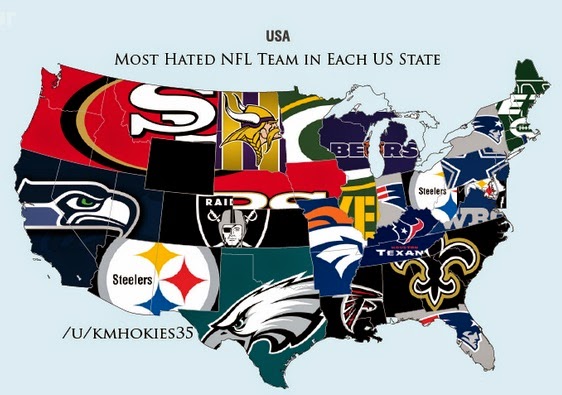 There's lots of great regional hatreds represented here, particularly the fairly recent San Francisco-Seattle rivalry. The Eagles are hated in Texas (no surprise, the feeling is mutual) but Oklahoma too? The logos are cute but make the maps very hard to read. However in the case of the Canadian hockey map, they work quite beautifully. 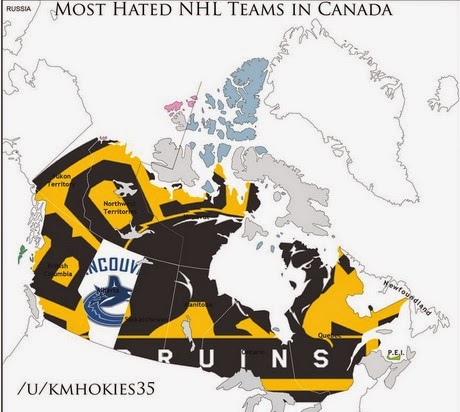 The very small sample size leads to some wonderful oddities, for example the hatred in Canada's Northwest Territories for the San Diego Padres, or my personal favorite; Africa's hatred of the Winnipeg Jets. 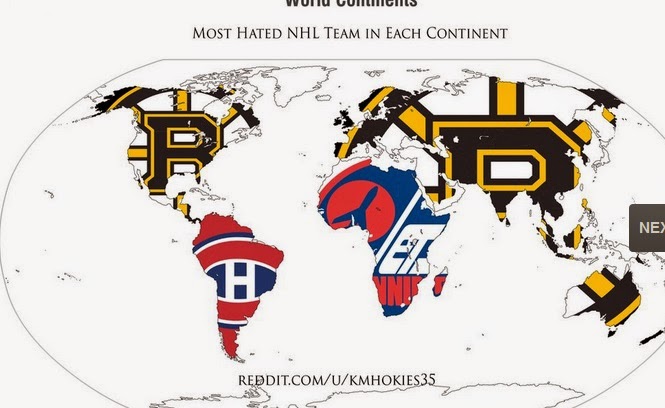 I did not post the NBA maps because they are kind of boring, either you hate the Lakers or the Heat. You can explore this and lots more over at SB Nation.
Posted by Dug at 8:40 AM 0 comments

Among my bountiful harvest of birthday gifts in May was a collection of old gas station maps of northeastern states and Canadian provinces from the 1960s-70s. As a collector/hoarder of these things, some were duplicates but others were "new."

These maps remind me of the unsung heroes of that cartographic era. Companies like H. M. Gousha, General Drafting, and The National Survey labored in obscurity while Esso, Shell or the state highway departments put their names on the cover. I was once offered a job at General Drafting at $7.88/hour. This was not nearly enough money even in the 1980s to justify relocating to Convent Station, New Jersey so I declined.  Speaking of New Jersey...


This map doubled as a help beacon. If you fold it the right way and place it on your dashboard it says "SEND HELP" in black against a bright yellow background.

When I tell people I was born in New Jersey and they ask "which exit" the answer is 109. 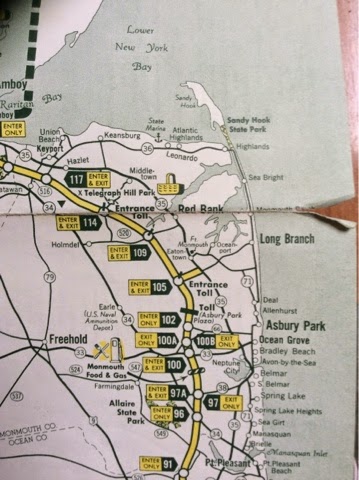 This map also does the vintage upside down gimmick for southbounders. Stop! Don't look at this if you're heading north! 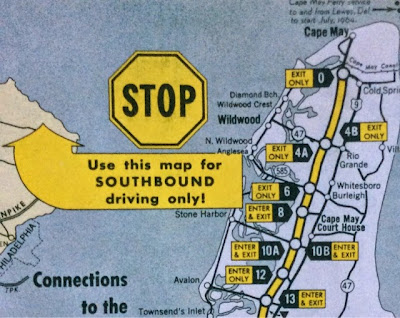 Welcome to Maine! Sure we have nice forests, lakes and oceanside vistas but none of that compares to our beautiful new Archives building.

New York is too big to fit clearly on one side of a map. The lucky folks in Elmira are in the Great Overlap so they don't have to guess which side of the map to open. 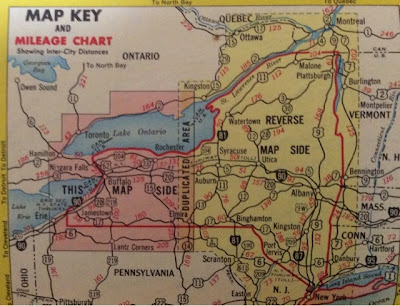 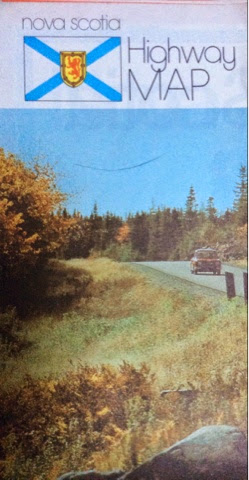 For a Canadian perspective here are two views of Nova Scotia, the first one is from the tourist bureau and has a cute scenic tours guide on the back page. The 1970s fonts are nice too.

I also think the scenery on the cover is nicer than the Maine map but that's just my strange opinion. 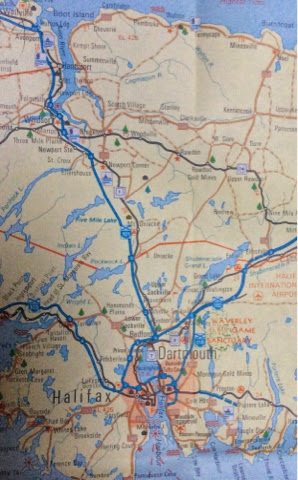 The Esso (General Drafting) take on the same geography. North is up on this one, not slanted to follow the peninsula's orientation like the map above. 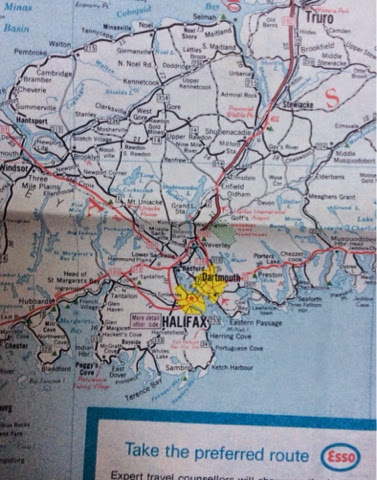 Happy motoring!
Posted by Dug at 5:57 AM 0 comments