Commenter Matt pointed out that Toronto has an impressive network of (mostly underground) connections. In fact it is the largest underground shopping complex with 28 kilometers (17 miles) of shopping arcades. Other interesting facts about the network can be found here. Below is a map of the system from ygraph.

Montreal also has a large Underground City represented pink lines on this map.

Here is the Centre Eaton map. 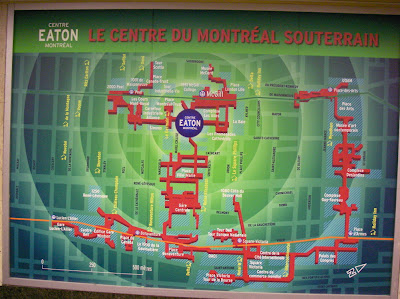 Wikipedia has a comprehensive list of the world's major skyway and underground systems.
Posted by Dug at 6:38 AM 0 comments

Had enough of winter's chill? The perfect warm weather destination is ...Minneapolis! With an extensive skyway system you can spend a week (or longer) there in your jammies and never go outside. Stay at a downtown hotel and you can walk indoors to shopping, restaurants, theaters, art galleries, tourist attractions and basketball games. Here's a map of the skyway system. 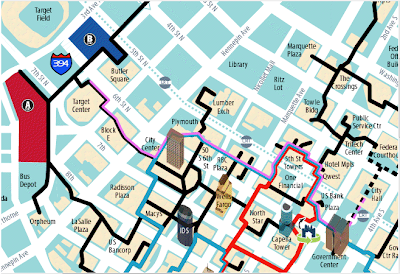 Location: Minneapolis
Email ThisBlogThis!Share to TwitterShare to FacebookShare to Pinterest

According to Early Gulf Road Maps of Pennsylvania the Gulf Oil Corporation is usually credited with the first drive in gas station - on Baum Boulevard in Pittsburgh (where the company was headquartered) and the first freely distributed road maps.

Both of these credits are subject to debate - see footnote two from the article above, however the early oil company road maps were predominantly from Gulf. The first Gulf maps were made by W. B. Akins, a Pittsburgh advertising man. After a few years they switched to professional map making companies, first the American Blue Book Company, then Rand McNally and then H.M. Gousha after Harry Gousha left Rand McNally to start his own company.

Below are some details from a 1915 road map of Pennsylvania produced by the Automobile Blue Book Company and distributed by Gulf. 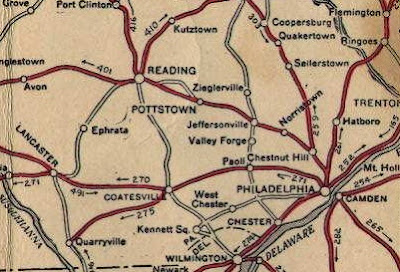 What is interesting (to me) about these maps is the importance of certain places (and lack of others) in the era before expressways. 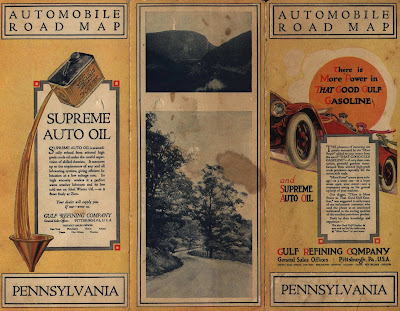 The cover talks up "that good Gulf gasoline" and the "sterling qualities of this excellent petroleum product." It also advertises Supreme Auto Oil - "Its high viscosity renders it a perfect warm weather lubricant and its low cold test an Ideal Winter Oil, - as it flows freely at zero." 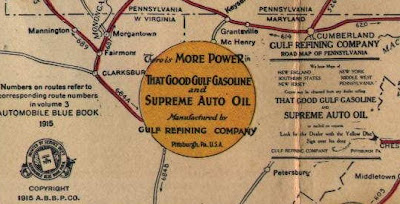 In addition to road maps Gulf also distributed trip itinerary maps. Here are routes from Pittsburgh to Buffalo and Cleveland (marked in orange), with a listing of the places in between and the mileage. I like the quaint picture too. 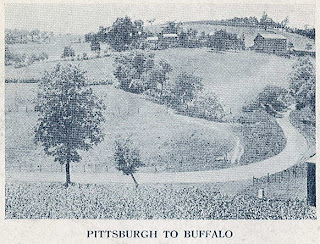 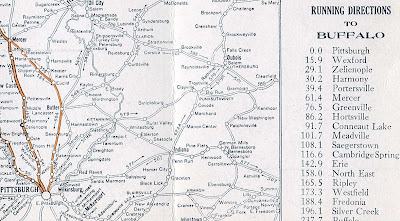 Below is a 1917 "Half Day Tour" from Philadelphia to New Hope, Lambertville and Trenton. These tours list detailed routes but don't tell you what to see along the way or why you should go to places like Lambertville. They do tell you where to fill up your tank - in this case at the Gulf station at Broad and Hunting Park in North Philadelphia. Gulf only had seven stations in Pennsylvania and southern New Jersey at the time. 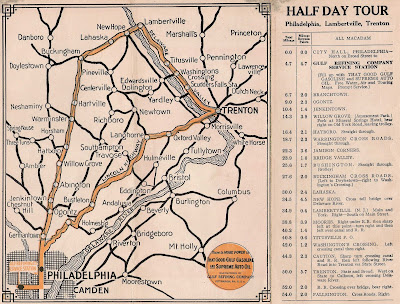 Of course I chose this tour for my own personal history. We lived in this area and took many of these trips.

Here is a 1925 Gulf map of parking regulations in downtown Pittsburgh. By then there were 14 Gulf stations in Pittsburgh. The takeaway from this map is to either try to find a space near the Point or on Congress St if you don't want to keep moving your car. 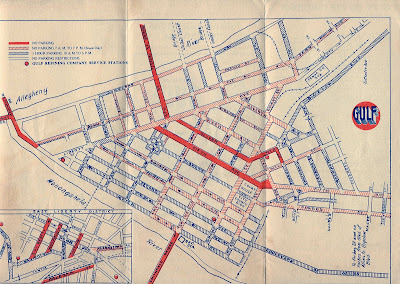 I will finish up with a detailed itinerary for the often changing Lincoln Highway, renamed Quebec Route 366 briefly in summer 2011. I have had inquiries about the specific route of this road - here it was in 1925. Street by street directions are listed for Pennsylvania. The New Jersey route is listed by town only.

Thanks to Historical Maps of Pennsylvania for the content of this post.
Posted by Dug at 9:16 AM 2 comments

The Texas Legislature drew the new congressional district map to protect Republican incumbents. However, the map may be in violation of the Voting Rights Act because it suppresses the opportunity for minority representation. Texas has gained four new seats in congress because of its population growth - 65% of which came from Hispanics. As a result a federal court in San Antonio has drawn their own map. This map could result in Democrats gaining up to four new seats. Here are the maps via the Houston Chronicle.

The fight is going to the Supreme Court and if not acted upon quickly will force the state to delay its April primary for a month or longer.

One person who seems to be having fun with this process is Texas Tribune illustrator Todd Wiseman. Here are some of his variations on a theme: 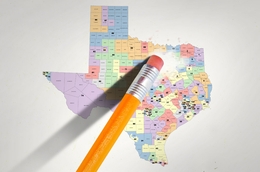 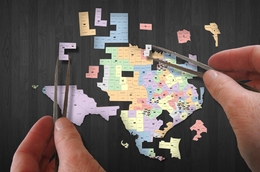 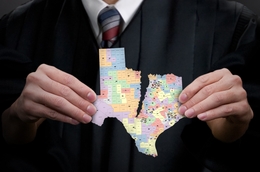 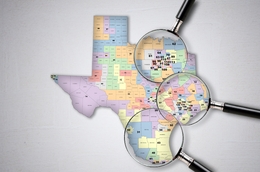 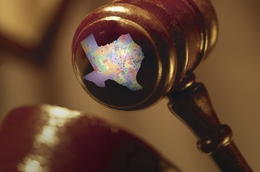 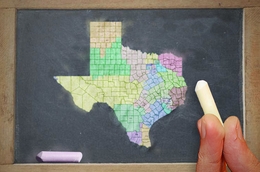 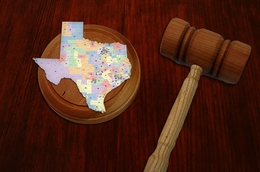 Samoa lost a day on Friday. In an effort to boost trade and tourism with the Pacific Rim Countries, the Prime Minister decided on a "great leap forward" across the international date line. 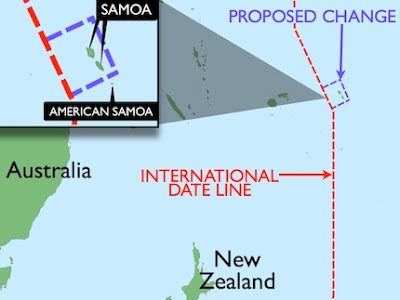 This is not the first time Samoa has moved across the date line. In 1892 they moved to the east side of the line to make trade with the United States and Europe more convenient. Now that China, Australia, New Zealand and other countries to the west have become more important trade partners, Prime Minister Tuilaepa Sailele Malielegaoi has decided to move back to the west side. According to Tuilaepa: "In doing business with them we're losing out on two working days a week. While it's Friday here, it's Saturday in New Zealand and when we're at church Sunday, they're already conducting business in Sydney and Brisbane." This quote and more information can be found at the Daily Mail.

This change means that Samoa and American Samoa will be on different days. This brings about all kinds of possibilities for celebrating any notable date twice with a very short flight or boat trip. It also means that Cape Mulinuu (Sunset Point) will no longer be the last piece of land in the world to see the day end. Now that honor will be passed to Cape Taputapu on American Samoa. 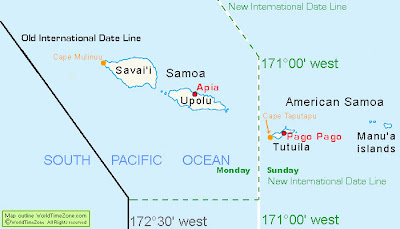