Bike month concludes with the Montreal Bike Fest, a week long celebration and North America's largest bicycling event. The festival involves several rides, a week of commuting activities, and related events. I have been to the festival several times and plan to be there again this year.

This Saturday things kick off with the Metropolitan Challenge, a 75-150 kilometer ride through the nearby countryside. I did the 100K ride a few years ago and it was lots of fun and not as difficult as it sounds. The following weekend has a Friday night ride and another one Sunday afternoon. These rides involve closing the roads to motor vehicles allowing cyclists to take over the streets. The Friday night ride (Tour la Nuit) draws approximately 12,000 enthusiastic riders, many in costume and with creative bike light displays. The Sunday ride (Tour de l'Ile) gets at least 30,000 and has had up to 45,000 riders. The 52K course (below) covers much of the city and is a great way to see neighborhoods you may not otherwise get to. 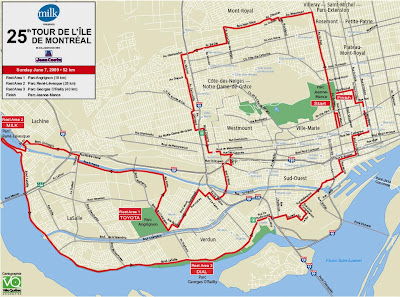 The route changes every year. This year they head west. There's usually crowds of enthusiastic spectators urging you on and in past years they have had a house decorating contest for residents along the route. 52K may sound long but my wife who's not a cycling nutcase like I am has done it several times and I bet you can too!

While in town I hope to get a chance to explore the Bixi. Montreal's new bike sharing program. Modeled after the Paris Velib system, it should look familiar to frequent readers of these pages. Here is a part of the Bixi system.

I hope I've inspired you to come up to Montreal or to at least dig your bicycle out of storage. Have a great end to your bike month!
Posted by Dug at 8:07 AM 1 comments

Bike month is coming and going quickly-so here's a bonus, two posts in one week!

EuroVelo, the European bicycle route network, is a project of the European Cyclists' Federation. Much of this text has been lifted from their web site. EuroVelo is made up of 12 routes, totaling over 66,000 km, of which about 45,000 km is already in place. 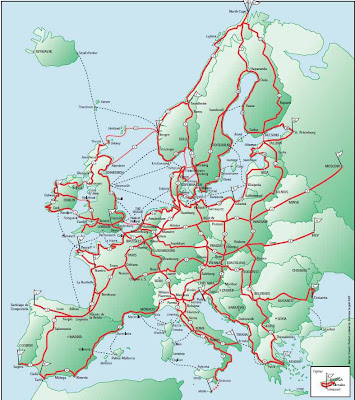 The EuroVelo routes are made up of existing and planned bicycle routes at a regional and national level. Their web site includes implementation guidelines for on-road and greenway routes. There are also guidelines for signage. Examples abound! 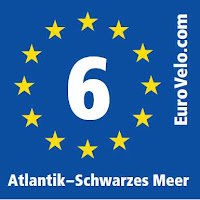 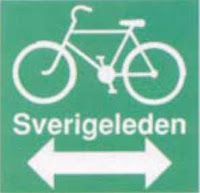 I was looking for bicycling information for my upcoming trip to Philadelphia when I came across the Philadelphia Bike Map Wiki. This page was created by the Bicycle Coalition of Greater Philadelphia. It allows users to locate hazards, good cycling routes, accidents, construction, favorite bike shops and places where bike lanes are blocked or ignored by drivers or the authorities. 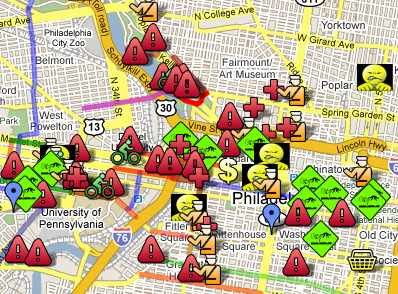 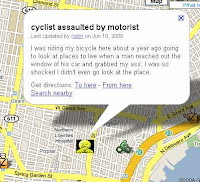 If you click on the angry yellow driver icons you get some truly awful stories about the kind of drivers we cyclists routinely have to deal with. Even in a bronze medal winning community. 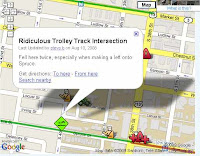 There is also lots of good information about places to avoid and good places to go- it's not all negative stuff. I don't know if this wiki has reached City Hall to help improve conditions or the (lack of) law enforcement but at least the cyclists have some good information. Now if I can only remember what info I was looking for originally....
Posted by Dug at 6:30 AM 8 comments

Paris is the envy of the bicycling world with its very successful bike share program, Velib'. The program is self service and allows the user to pick up a bike at any "service point" and drop it off anywhere else. The service points (stations) are available 24 hours/7 days a week and are spaced 300 meters apart. The purple icons represent stations. Each station has about 20 bike stands and a card reader to allow the user to access the bikes. 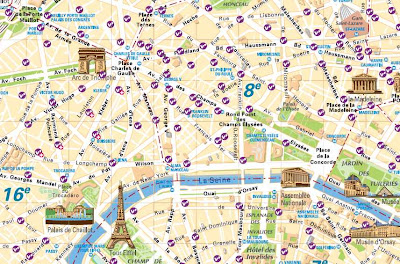 The maps illustrate how well the stations cover the city. Are all maps of Paris are required to show pictograms of the monuments? 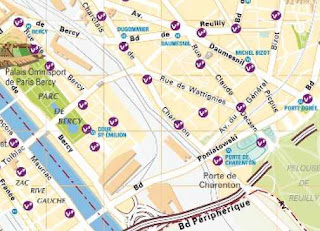 This detailed section shows that even the edges of the city are well covered.


I have not been to Paris since they implemented this program but it looks like fun and its success has spawned imitations throughout Europe. Even some US cities are considering the program.
I like these zoomed way out google map views from their station finder. They illustrate the density and reach of the program. 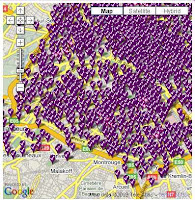 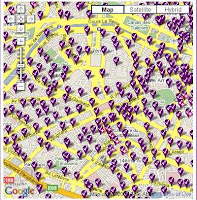 La ville est plus belle a velo!
Posted by Dug at 6:20 AM 1 comments

Though we've had rainy, lousy bicycling weather here since the 1st, May is National Bicycle Month. At the risk of being overly self-indulgent and boring my map readers to tears, I plan on making May's posts all be bicycle related to honor the month. This first map is from the League of American Bicyclists. They put out a very nice brochure listing their designated "Bicycle Friendly Communities". These communities were given medals - Platinum, Gold, Silver and Bronze. There are photos and descriptions of projects in each city. Unfortunately the map on their web site is lousy. 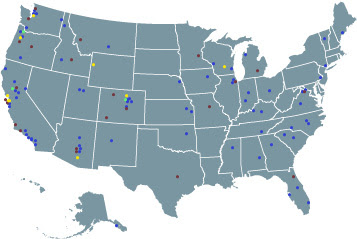 The dots are too small, the contrast is terrible, the background color is too dark making the little dots hard to see and the color scheme is not very logical. Brown = Silver? Blue = Bronze? The map is interactive in that you can click on a state, get the community list and click each city or town to get a page with photos, its highlights, and accomplishments. 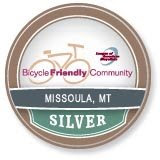 You can also see your state's rank. Patterns? Mostly West Coast and college towns with some other clusters in Arizona and Colorado. Until the recent additions of Philly and New York the northeast was looking pretty bare. We're still awful and we know it!
Posted by Dug at 6:45 AM 2 comments