DJ Yuletide from Melting Point Radio (WRMC-Middlebury College) presents this heavy metal cartogram. It is based on the number of bands registered on Encyclopedia Metallum. While obviously the bigger countries have more bands, the per capita metal leader was Finland with 2300 bands. Bands like Diarrhea Vomit and Life is My Enemy.

Questions arise such as:
Why is so much of the area of the USA taken up by Alaska? -
Do they really have more bands there than the rest of the country
or is it the "mediocre" Mapresso cartogram applet?
Does Greenland represent Denmark or Greenland?
Are all Europeans metal crazed freaks?
What are those 3 islands floating down near Antarctica? -
Or are they just there to look creepy?
Posted by Dug at 6:57 AM 5 comments

Map of the Week - Ski Profiles

Ski.com provides some nice 3D profiles for 23 resorts around the world. Below is Steamboat in Colorado. Click the map, wait 12 seconds or so to load it and you'll get tools to pan, zoom, rotate and go to specific areas. 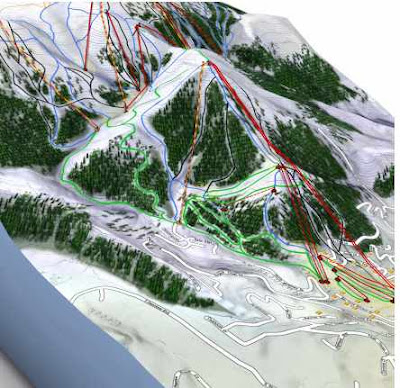 Here are the views from above and below. Happy virtual skiing! 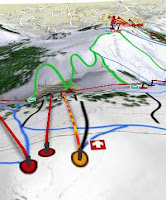 Map of the Week - The Lincoln Highway

Abraham Lincoln turns 200! In honor of his big birthday here is a Lincoln Highway Map of the Week. 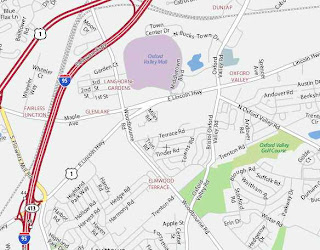 When I was a little tyke in Levittown, PA we had a street map I'd stare at for hours at a time. I noted that the big road with the drive-in theater, ice cream place, Thom McCann shoe store and 7-11 was called the "Lincoln Highway". Years later when I drove past a section of the highway in Nebraska, I began to wonder if it was the same road. I'd heard talk about the highway running from New York to San Francisco and roughly parallel to Interstate 80. Must be another Lincoln Highway? That route would put you way too far north. Turns out the route is not so direct after all.

There have also been many branches and alignment changes so following the route is not completely straightforward.

About a week ago I walked into my living room and the TV was on with people talking about some very familiar places near Levittown. It was a documentary on PBS called "A Ride Along The Lincoln Highway" produced by WQED-Pittsburgh. Apparently this country is full of Lincoln Highway fanatics. The Lincoln Highway Association founded in 1913 while the road was first being developed is once again an active organization and even has a trading post for merchandise including maps, CDs, videos and collectibles. There is also a Lincoln Highway News blog as well as a blog by Rick Sebak the author of the documentary.

After immersing myself in all these highway facts I can see why all the fuss. The Lincoln Highway was the first road to cross the USA. It leaves New York via the Lincoln Tunnel and enters San Francisco on the Bay Bridge (formerly by ferry). They built these cool looking markers along the route. Where they couldn't place markers they use signs or even telephone poles. 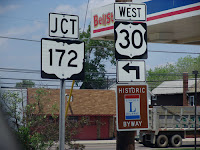 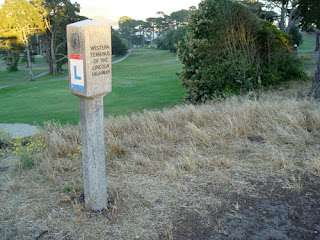 Here is the marker at the western terminus in San Francisco - at the Palace of the Legion of Honor in Lincoln Park.

Finally, in closing here is a 1924 highway map with the Lincoln in red. I find the alignments of some of the other blue roads to also be interesting. Thanks to the WQED documentary page for most of the above photos. 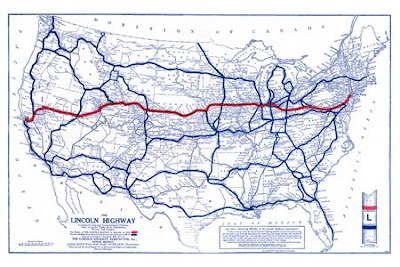 Map of the Week - City of Vice

Those of you regular readers know that I attended the "Maps, Finding our Place in the World" exhibition that came to Chicago and then to Baltimore last year. I bought the companion book from this exhibit and have been slowly reading it.

This map (from William T. Stead, "If Christ Came to Chicago!", 1894) shows the "sites of moral depravity and turpitude" within Chicago's Nineteenth Ward, First Precinct. According to the book the map "worked to tame the anxieties about social dysfunction held by the same people, by isolating each dysfunction, comprehending it, and so enabling it to be corrected and eliminated." The map shows brothels, pawn brokers, saloons and lodging houses in addition to "legitimate" businesses. Because of the gridded nature of Chicago's streets and the almost exactly identical areas of the properties, the map looks and functions almost like a graph. A more complete description of the map can be found here.
Posted by Dug at 6:26 AM 1 comments