The Australian Strategic Policy Institute (ASPI) is documenting the Chinese government's treatment of Uyghurs and other minorities in the remote northwestern province of Xinjiang. Using open data, satellite images and Chinese government documents they have created an interactive map detailing detention centers (a diplomatic term) as well as showing attempts to erase local culture by destroying mosques and cultural sites. 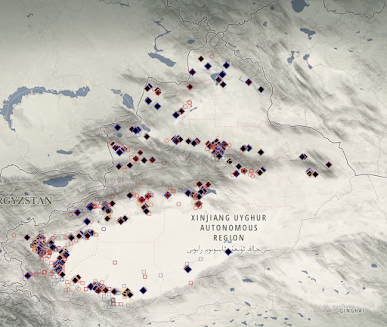 Here is a detail from the capital region of Urumqi with the legend included. 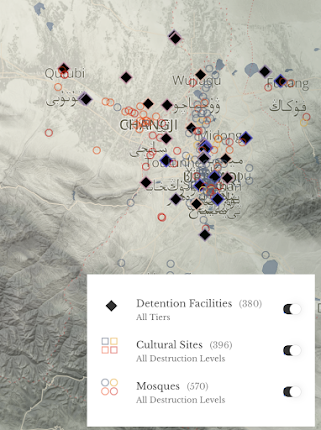 Clicking on a site brings up details. In this case the growth of a prison where forced labor and "reeducation" are practiced is documented by the number of buildings increasing from 15 in 2017 to 28 the following year. 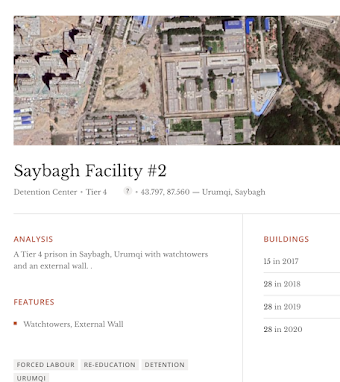 For more on these detention centers there is a scrollable exploration on the web page.

In World War II The United States Playing Card Company designed cards for POW's in Germany with maps hidden between the paper layers. When soaked in water the cards could be peeled apart and prisoners could see secret escape routes. These "map decks" were closely guarded secrets and few survive, This one from a private collection may be the only surviving example - via Bicycle Cards. 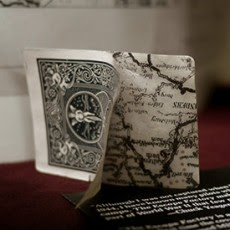 There is a replica deck available on Amazon. The image gives a better idea of what they would have looked like. 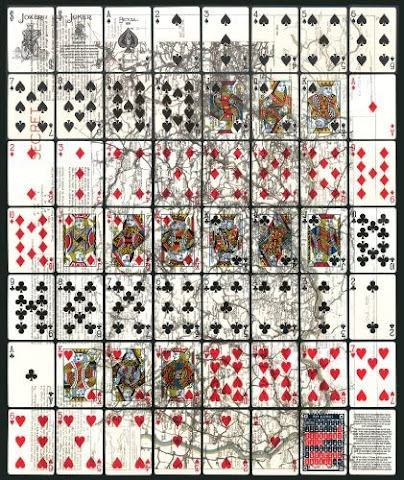 The Maps of Pauline Baynes 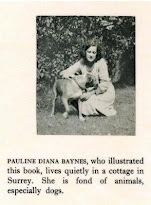 Pauline Baynes was best known as a children's book illustrator. Her work on some of the most well known maps of the fantasy genre is less well known. She illustrated maps of Tolkien's Middle Earth and C.S. Lewis' Narnia.

After studying design at the Farnham School of Art, she started illustrating children's books. During World War II she joined the Women's Voluntary Service and eventually began making maps and nautical charts for the Royal Admiralty in Bath. This cartographic training served her well through her career. Her work was shown to J.R.R. Tolkien who was dissatisfied with his original illustrator for Farmer Giles of Ham. He was delighted with her work and hired her to illustrate the book.

Through Tolkien she got to know C.S. Lewis and was hired to illustrate and map his Chronicles of Narnia series.

Baynes made a color map of Middle Earth published in 1970. Tolkien supplied her with various charts he made and annotated a map his son had produced for The Fellowship of the Ring in 1954. The annotated map was recently discovered inside Baynes' copy of the books. 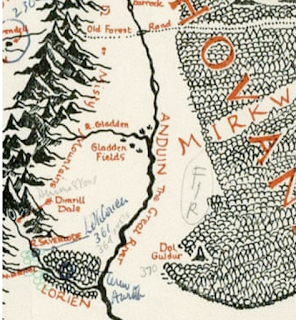 More details on this map can be found here. The finished product is below.

A little nice detail, including the cartouche. 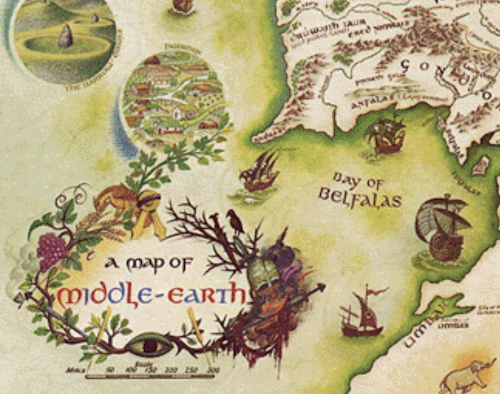 To see more maps and artwork visit her tribute site.

I've been highlighting maps that I love in this space for years. I thought it might be interesting to flip the script and show some maps I hate and why.
1. Bacon vs. Kale 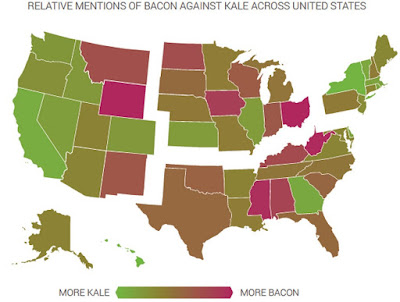 There are two versions of this map-the above one is from Business Insider. Below is a more clever version. Many carnivorous people I know have this dumb fear that some army of vegetarians is plotting to take their meat away. Mentions on Twitter as your primary data source is pretty dubious at best. The article even makes a point of tying your politics to your food choices. They want to take your guns AND your bacon away! The major point to keep in mind is that (as only shown on the version below) even in the kale-iest places there are still twice as many bacon mentions as kale mentions. 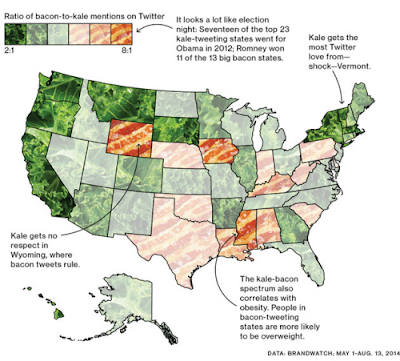 The map above (via the ICA Commission on Map Design) has a cool symbol scheme but again is very misleading by showing the kale pattern in states where there are twice as many bacon mentions. 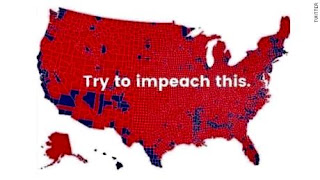 Like everything involving Trump, this map is full of dishonesty. Ask Richard Nixon about whether you can impeach someone who won more states. Using counties in a pure red/blue color scheme (with the red very intentionally bleeding into the blue areas) puts land over people but on top of that this map is also based on some early returns that showed Trump leading several counties that he eventually lost (via CNN). You would never guess from any of this that he LOST the popular vote by a significant margin and that is the point - to obscure the facts. This gif tweeted by Karim Douïeb is the best refutation I've seen of this map.

Challenge accepted! Here is a transition between surface area of US counties and their associated population. This arguably provides a much more accurate reading of the situation. @observablehq notebook: https://t.co/wdfMeV5hO4 #HowChartsLie #DataViz #d3js https://t.co/lStHeeuMUw pic.twitter.com/MpYiXtsHmu


3. The Worst City in Every State.


Worst city in every state according to my Instagram followers. pic.twitter.com/GxZ1Lsub53

Another gem from social media using the highly scientific data set of one person's Instagram followers. This map can easily be accused of racism (Camden, Gary, Flint, etc) but also includes other strange outliers like hatred of the rich in places like Edina -unless this is just some kind of suburban rivalry thing. Or simply a place where an imaginary Netflix murder took place (Mantowoc). I would be willing to bet that many of these votes are from people who have never set foot inside these cities out of fear or other narrow-mindedness. I've never been to Dallas (outside of the airport) but it's a large city with a lot of culture and I can imagine there are many worse places. 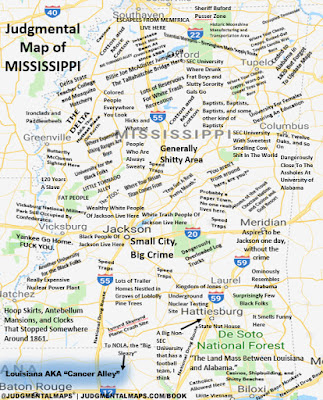 I will admit that I sometimes enjoy these maps and some are clever but these maps are so full of hatred, narrow-mindedness and predictable jokes that they are best avoided. Also most of them are just Google maps with text thrown on top-not very original. At least the Alabama version has some nice topographic details. 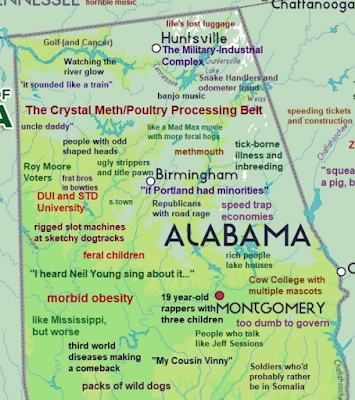 Enjoy if you like but keep your mind from snapping shut! It seems like there should be more than this but I guess I've done enough hating for now.
Posted by Dug at 6:06 AM 0 comments 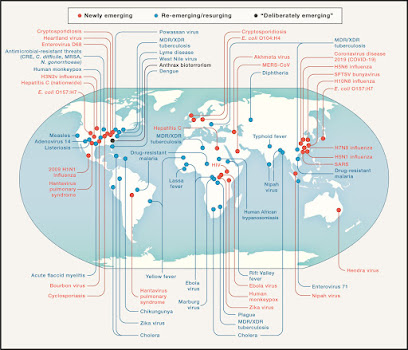 This map - via ScienceDirect shows where pandemics have newly emerged or re-surged. "Disease emergence reflects dynamic balances and imbalances, within complex globally distributed ecosystems comprising humans, animals, pathogens, and the environment. " The article also states that "newly emerging (and re-emerging) infectious diseases have been threatening humans since the neolithic revolution, 12,000 years ago, when human hunter-gatherers settled into villages to domesticate animals and cultivate crops."

Hopefully the map will challenge typical western assumptions about where pandemics originate.