MOTW @ the Baltimore Festival of Maps!

I finally made it to Baltimore for the Festival of Maps! The picture below is proof! 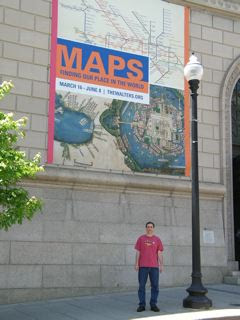 I spent a very good four hours at the Walters Art Museum (my normal museum limit is two) and could have spent even more time there if I had more stamina and fewer sleeping family members to consider. I could spend another four hours gushing about how great it was but I like to try and keep these entries manageable. If you want a really good, comprehensive review of the Maps: Finding Our Place in the World exhibit check out the Pond Seeker - his review is from the Chicago exhibit so it won't be identical but most of those maps are at the Walters also.
I will give a quick look at the highlights in this post and then maybe revisit the exhibit and other festival notes in a future post.

Logistics note: We drove down from Philly for the day-if I had it to do again I would have stayed overnight so I could have spent more time at the Walters and seen more of the satellite exhibits and events.

My favorite things from the exhibit were the more 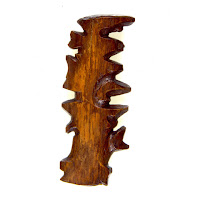 non-traditional maps, particularly this thing that looks like a back scratcher but is really an Inuit map of the coast of Greenland. Travel down the right side and you head south down the coast-as you go back up the left side you are heading further south. The shapes of the inlets are shown, but also the slope of the coastline is represented by the slopes on the wood so they had an idea of the coastal topography. Pretty clever-and we think they're primitive! 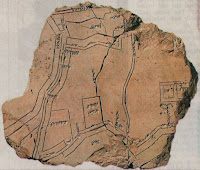 On the left is what is considered to be the "earliest known map drawn to scale" from Nippur, Babylonia - I had to steal this image from the Book of Joe - the blogging anesthesiologist. Thanks Joe!
There's so much more to say and show but it's very late so I will highlight more stuff when my mind is fresh!
Remember you only have until June 8th to see all this great stuff so hurry down to Bawlmor!
Posted by Dug at 8:10 PM 2 comments

Map of the Week 126-The Olympic Torch Relay

The Beijing Olympic Organizing Committee has put together a nice interactive map of the torch relay route. 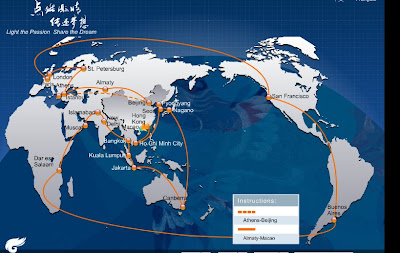 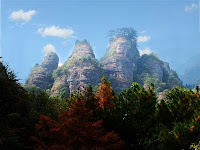 and some other basic cultural and demographic information.
Clicking China gets you details from each province. If you want to follow the torch or go protest the government's treatment of Falun Gong, Tibetans or Chinese here's how you know where to go.

As of this post they are either in Suzhou or on their way to Nantong, just north of Shanghai. So light the passion and share the dream!
Posted by Dug at 5:53 AM 1 comments

Map of the Week 125-Asian Disasters

It's been tough finding good maps of the earthquake area in China. The BBC wins out again with this map although the scale is a bit too zoomed in to get a good sense of the surrounding areas. You do get a sense of how close Chengdu, a city of about 4 million people, is to the epicenter and how severe the quake was there. You can click on the affected cities and get more information - or just scroll down on the same page. 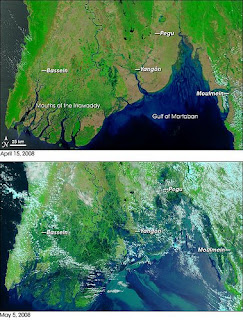 One of the more tragic aspects of the China quake is how it has made many of us forget about the cyclone in Myanmar-Burma (Whatever you prefer to call it) where another city of 4 million Yangon-Rangoon (Whatever you prefer to call it) has been hit.
This is a set of before and after satellite images of Cyclone Nargis from the NASA Earth Observatory. The after image shows the extent of flooding as of May 5th using a combination of color and infrared light to clarify the floodwaters.
Anyway be thankful if you're not in one of these places and hopefully we'll all donate a little to help these people-it could be any of us next time.
Posted by Dug at 5:50 AM 2 comments

Yes many of you probably took trips like this when you were young but did you have a trip name? A motto? A blog? Corporate sponsors? Media coverage? Donated oil? Online donations? Didn't think so. Kids these days are savvy!
This is the "Great American Road Trip" - some guys from Utah with a gimmick - cover all 48 contiguous states in 5 days. Not how I would choose to do it-I have this weird notion of actually wanting to see some of these places that they're whizzing by in the middle of the night but that's just me. So how do you get your 48 in the shortest possible time? Here is their well researched route. 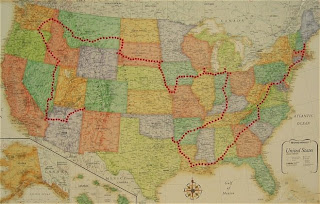 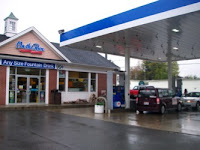 They started at this scenic gas station in Brattleboro, Vermont and end up at the Four Corners. As of this post they are in Idaho. Click the map to follow the trip but hurry-they're almost done!
Posted by Dug at 5:47 AM 1 comments

Folks these days just don't seem to know how to have fun on May Day like we did back in 2001.

Back then in London we rode our bikes wearing fluorescent wigs, gave Winston Churchill a "mohican-style haircut", illegally fed pigeons, and carried signs saying "overthrow capitalism and replace it with something nice." Nowadays we have Bank Holidays , Mayoral elections and Beardyman. Bloody drab mates! And not even a good map of the events.

Maybe you should just go to Ickwell and dance around the maypole. 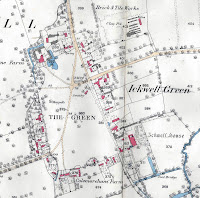 Here in the USA there will be lots of marches but not a whole lot of good maps. I found some maps showing road closures courtesy of the Los Angeles Dept of Transportation and that's about all. So try to enjoy your May Day despite the dearth of good maps.