In 2013 Apple switched from naming its operating systems (OS) after large cats to California landmarks. The company trademarked numerous California place names. Here is a map I created showing places that could end up as future OS names. 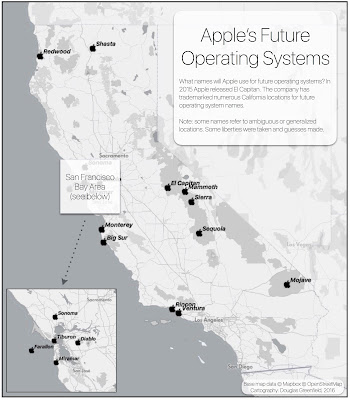 Map Notes: I came across several trademark lists while researching the El Capitan OS before purchasing a new MacBook. Some of the place names are ambiguous. For example, Miramar could refer to a beach on Half Moon Bay south of San Francisco, or to a neighborhood of San Diego. Other names such as Mojave or Sierra refer to very large areas. I placed the points as best as I could.

The color scheme is generally monochrome in parallel with much of Apple's corporate branding. I could have gone more minimalist by removing the parks and forests but I liked those details. I used Apple's San Francisco typeface adopted to publicize El Capitan.

Mavericks and Yosemite were not included because they are previous, not "future" OS's. Also both are in busy areas of the map so it was less cluttered to leave them off.

Technical Notes: This map was done as an exercise in learning some open source software packages, notably Mapbox.  I created a base map in Mapbox Studio using Apple's logo to mark the locations. The basemap can be opened with this link. I took a couple of screen shots from the basemap and did a bit of manipulation using Paintbrush. Inkscape was used for the apple icons. The final layout was done using Keynote. I probably could have found a good free and open source (FOSS) package to do this with but since I have a MacBook, Keynote is readily available.

I mostly avoid posting stuff from the Atlas of Prejudice despite their popularity. Lazy cliches are fun but a bit predictable: 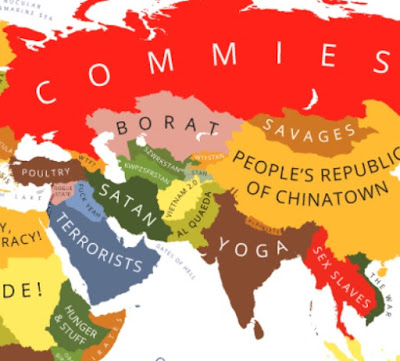 However, I am quite fond of some of the maps listed under "Our Collective Eating Disorder"
For example, the Culinary Map of Europe According to Italy. 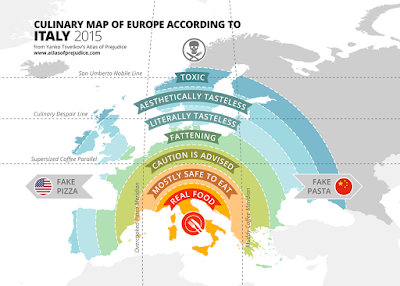 Beyond the delightfully ridiculous non-realistic concentric circles, there are other nice details like the names of the parallels and meridians. Also, the subtle digs at the US and China (didn't they invent pasta?)

The Culinary Horrors map is also fun, though I have no idea how accurate it is. 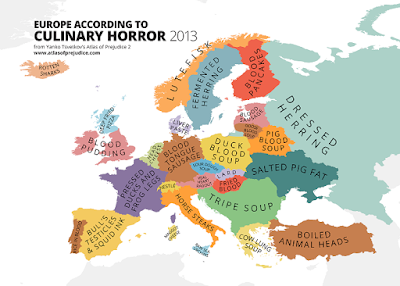 Now back to my duck blood soup.

Location: Italy
Email ThisBlogThis!Share to TwitterShare to FacebookShare to Pinterest

For those of you who can't get enough British television, American Tim Ritz has given us the Great British Television Map. 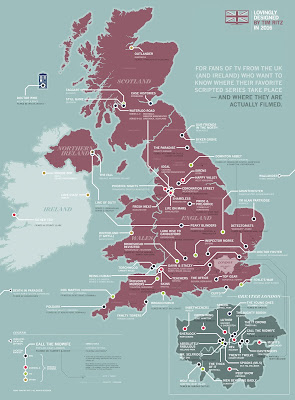 The map shows each series with a thick white arrow pointing to its intended setting. The setting location is color coded by channel. A much smaller, and often difficult to follow black line points to the filming location. A notable exception is Doctor Who, who's setting is listed as "All of time & space" and is located off to the side.
Here's a detail from the Midlands. 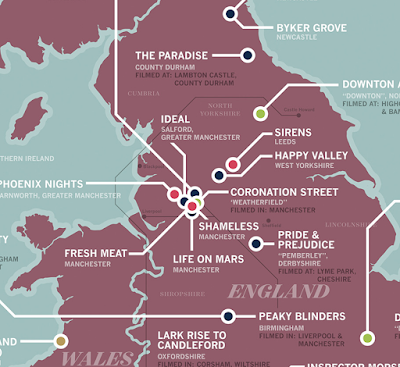 There is also a London inset map at the bottom. 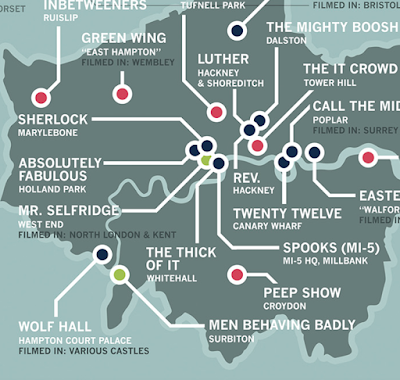 The map can be purchased as a print here.

Unfolding the Map, a celebration of the cartography of New Zealand, is on exhibit at the National Library of New Zealand in Wellington. One of the featured maps is a reproduction of Tuki's Map, the oldest known Māori map of New Zealand. 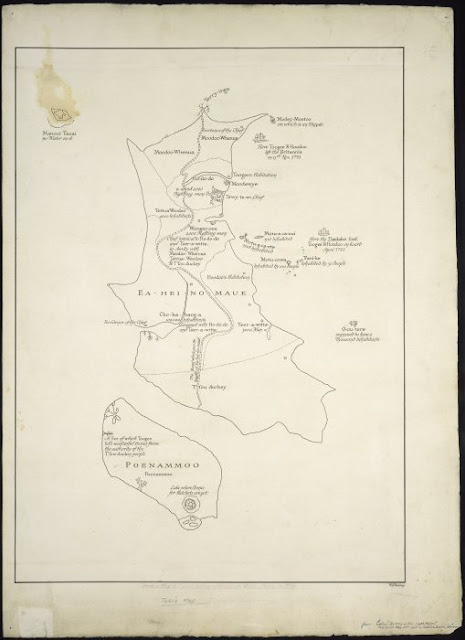 The original map was drawn by Tuki Te Terenui Whare Pirau, a Māori who was captured and imprisoned on Norfolk Island. The map on display is a reproduction drawn by the New Zealand Department of Internal Affairs (circa 1940). The original was circa 1793. Tuki made this map for the lieutenant governor of Norfolk Island who was interested in his language culture.

Tuki was from the peninsula north of Auckland in the far northern part of the North Island. This area is greatly exaggerated in size and detail. He knew little of the much larger South Island so it is drawn as a small island at the bottom. 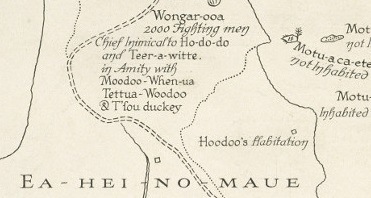 Bonus Map!
Another nice map from the exhibit is this lighthouse chart from 1900. 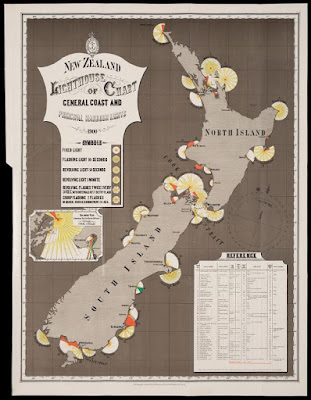 Here is the legend and a detailed view. 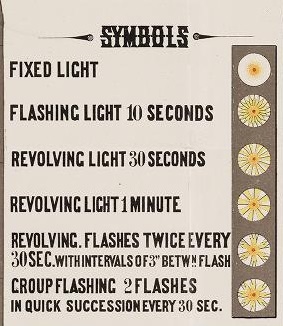 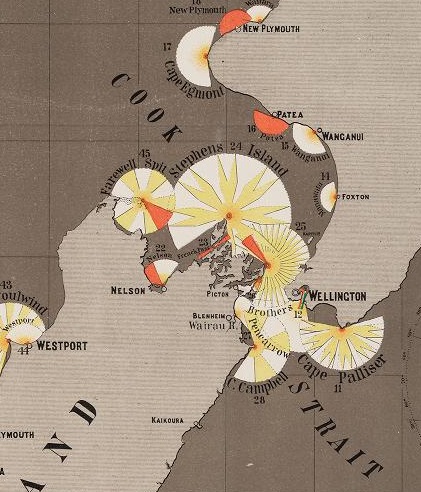 Unfolding the Map "brings together the fascinating maps of the Library's collections and stunning examples of the state of the art today." The exhibit is on display through August, 2016. If you're in the area check it out.