Map of the Week - About that Earthquake

So we had this earthquake yesterday. OK 5.8 is nothing by west coast standards but when it happens on the east coast it's really important! I'd love to see a map of all the tweets because they apparently traveled quicker than the quake itself. There were reports of people seeing the tweets before feeling the quake. Of all the maps out there, this one from Joe Hanson is clearly the most informative.

Anyway, the Baltimore Sun shows this map from the USGS showing the intensity felt by color. They use a detailed questionnaire to make it a bit less subjective.

Here is a link to other USGS maps. Hope you survived. I didn't feel a thing but I was on my bicycle and everything feels bumpy from there.
Posted by Dug at 8:47 AM 0 comments

Map of the Week - Reverse Colonialism

Here is a "cool" map that recently appeared on Strange Maps. It was produced by cinematographer and multimedia artist Inuk Silis Høegh for a project called "Melting Barricades," part of the  Rethinking Nordic Colonialism exhibit. The map pictures Denmark being colonized by Greenland, not just by the people but also by climate and topography. 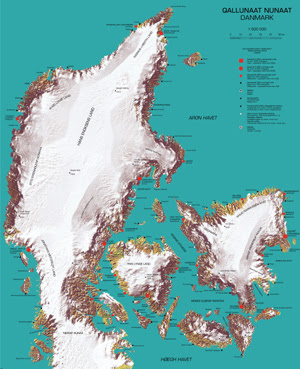 Greenlandic names are imposed on places with the native Danish names in parentheses. The country name and title of the map is Qallunaat Nunaat (Danmark) and its largest city is Nunap Utsussua (København.) The coastline has become jagged from glacial erosion and the frozen interior named after native Greenlanders. The author also appears to have named a strait after himself, the Høegh Havet.

There are a lot of details that escape me because I don't speak either of the languages and don't know my Illuqarfiks from my Nunaqarfiks. Some understandable (to English speakers) place names include "Chilly Friday" and "Air Greenland Fjord."


Høegh also made a video called Attack-atigiit showing the Greenlandic occupation of Denmark. The language barrier prevents me from all the clever details but the general picture is clear. Below are some stills. The first one shows quizzical Danes studying the above map. At least I think that's the idea. 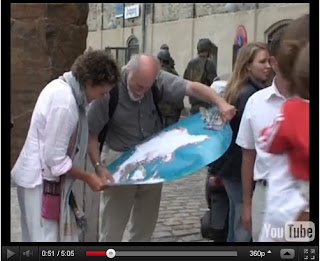 In this one Greenland is shown on a world map as a Mercator Giant, planting its flags around the world. 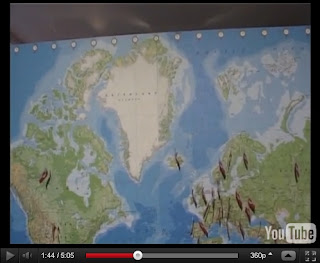 It's another weekend - so enjoy your local condiment. This map is from Jeff Wysaski's Pleated Jeans site. South Salsa? 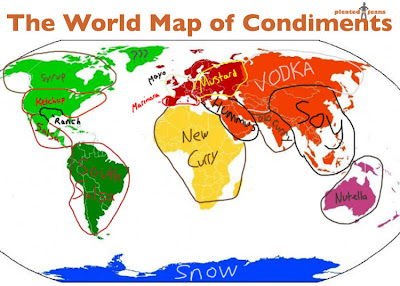 Azavea, a GIS software development company is launching an online redistricting contest for Philadelphia in an attempt at a non-partisan, collaborative process. From techPresident:
Amid Protest Over Closed Philadelphia Redistricting Process, Tech Firm Decides to Start Its Own.

Giving the public a nice and easy interface to make their own districts is a good idea but the City Council can still choose to ignore it. Results will be posted on the Redistricting the Nation website. This site also has a draw your own district interface and lists the Top 10 least compact congressional districts in the country such as Maryland's District 2.

The Alaska Native Language Center in an attempt to preserve indigenous languages has created this striking map of language groups. Some of the languages represented on this map are spoken by fewer than 10 people, others are no longer spoken.

The map is an update of a 1974 map by Michael Krauss that was a result of a linguistic survey focused on variations in pronunciations. Krauss gathered much of his language information from patients at the Alaska Native Service Hospital. There is a detailed history of this and previous Russian and American maps on the Resources pages from the Center's website.  There is also a detailed discussion of the sometimes controversial choices made for language names and spellings. Interestingly many of the language names translate to mean either "people of this region" or "real", "true" or "genuine" person.