Map of the Week- Lookout Mountain

On this day in 1863 Union and Confederate forces fought the Battle of Lookout Mountain. After losing a major battle at Chickamauga in September, Union forces gained control of this strategic overlook and the following day forced the Confederate troops off nearby Missionary Ridge. These battles enabled the Union Army to control most of Tennessee and set the stage for later campaigns in Georgia. 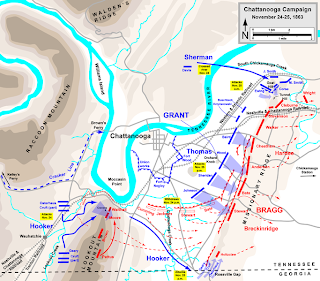 This battle and many others are nicely documented in maps for Wikipedia by amateur Civil War historian Hal Jesperson. 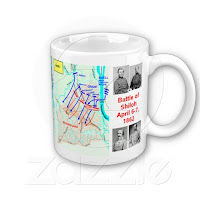 He also sells coffee mugs and t-shirts featuring his maps at Zazzle. Maybe someday he'll make a Lookout Mountain coffee mug that looks as nice as this one showing the Battle of Shiloh.
Posted by Dug at 1:56 PM 0 comments

President Dmitry Medvedev of Russia, in a recent speech, suggested reducing the number of time zones in Russia. A recent BBC article titled "Changing Times in Russia" highlights the difficulties of governing a country that has 11 time zones.

Businesses along the Amur River, across from China have a very short time window in which to be in contact with Moscow during normal working hours. Much of that region's economy has stronger economic ties to China, being closer not only geographically but temporally. The region could possibly improve ties to western Russia and Europe by changing their clocks to be in a closer time zone.

China, despite spanning five time zones has adopted one time zone for the entire country. Taiwan, Hong Kong and Macau also use this same time zone. Russia is much too big and would more likely combine several of the time zones on the map above. The BBC article did not list any specifics from Medvedev 's speech but according to Georgian Daily he has proposed cutting the number of time zones to four.

Russia's 11 time zones are a source of pride for many, showing how large the country is and resistance to the plan is expected. A quote from a skeptical scholar of the plan via the Georgian Daily article:


Moscow can cut the number of time zones but it can’t change the shape of the earth or the speed of its rotation relative to the sun.


At least we hope they can't. They do have nukes!
Here is a list of the time zones:

Map of the Week- Where was the Wall?

There's been much media coverage of the 20th anniversary of the fall of the Berlin Wall. One story I heard was about how some residents of Berlin no longer remember exactly where the wall was located. The German Senate has been working to preserve remnants of the wall and border fortifications. Berlin's official web site has a nice online map and guide showing the course of the wall and the associated monuments. This overview map allows the user to add artistic, memorial and historic sites and click on them for details. 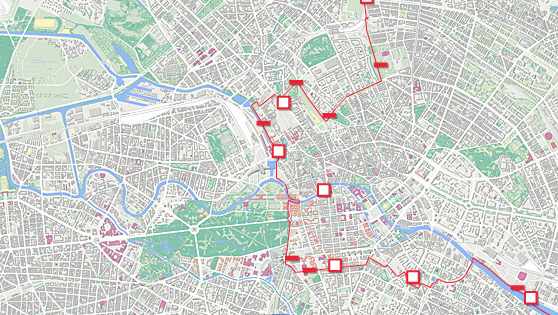 Below is a zoomed in view of the area around the Pariser Platz and Brandenburg Gate. 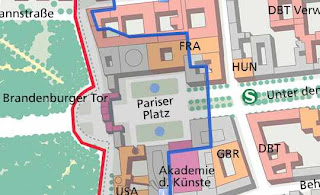 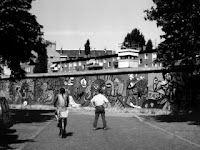 There is also a 3D view although it requires the Google Earth plugin and does not allow for much interaction. 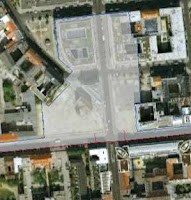 Here is an aerial view of the Checkpoint Charlie area combined with a map of that location.

The City has also constructed a hiking and bicycling trail along the 160 kilometers of the former border, most of it following the border control roads used by the two governments. The website has a nice description of each section of the trail and also has a link to the Mauer Guide, a downloadable GPS tour that traces the path of the wall with historical information. The guide can be loaded to a cell phone or other handheld device.

The Map as Art-Exhibit Opens Tomorrow

The Map as Art opens tomorrow at the Christopher Henry Gallery in New York City. This is a group show curated by Christopher Henry and Katharine Harmon, author of the really great map book "You Are Here: Personal Geographies and Other Maps of the Imagination." The show shares its name and accompanies the launch of Harmon's new book. There is an opening reception tomorrow (November 5th) from 6-9 PM.

The gallery is "conveniently located off the Elizabeth Street ramp of the Lower Manhattan Expressway" as illustrated below. Those of you in NYC might actually get the joke. 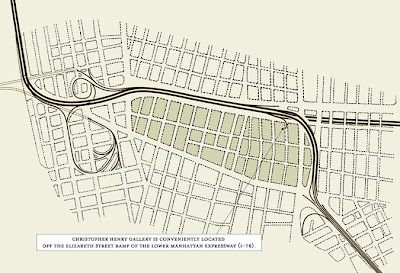 I did not get any images from the show other than what's on the gallery's site. Below is "Strike Anywhere" by Doug Beube.

Many artists are featured including Joyce Kozloff and Karey Kessler.

Here's a quote from the press release. I'm not sure how much I agree with it but it's an interesting take on mapping.

"In the guise of offering illumination, maps obscure. They purport to bring order to the fundamental chaos of life, promising clarity in the face of flux, and claiming knowledge of the unknowable. In their quest to demarcate our differences, they comfort us even as they give the lie to the notion of common experience."