As a follow up to Women's Suffrage in 1908, here is an ad from 1917 showing how suffrage (the white areas*) had expanded through most of Canada and parts of the United States.

The ad is from the National Women's Suffrage Publishing Company and asks how long the U.S. will lag behind Canada. For contrast here is the 1908 map again. Keep in mind that the color scheme is reversed. 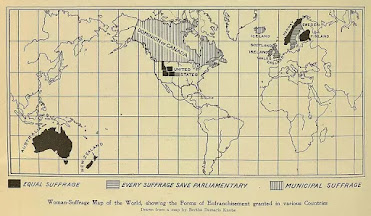 The Atlas of Imagined Places

The Atlas of Imagined Places by Matt Brown is now available. 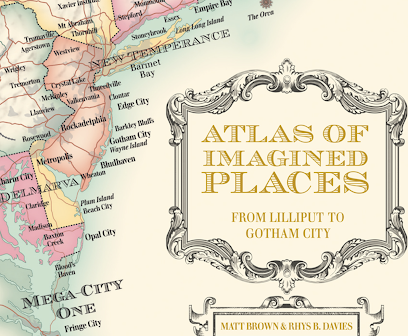 The book shows the "likely geography" of places in literature, media, myths and video games.

"The authors have taken years to research the likely geography of thousands of popular culture locations that have become almost real to us. Sometimes these are easy to work out but other times a bit of detective work is needed and the authors have been those detectives. By looking at the maps, you’ll find that the revolution at Animal Farm happened next to Winnie the Pooh’s home."

Here is another image from the Amazon page. 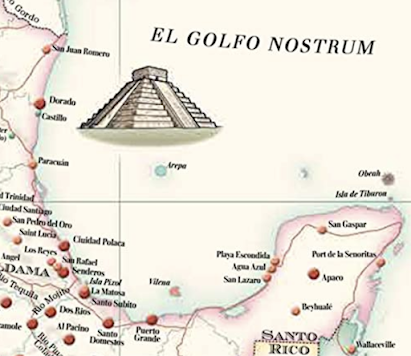 Emma Hart Willard was a pioneer of education and geography. She saw geography as a foundation for teaching. Her approach was to have students start with maps of their local environment, instead of at a harder to grasp global scale. She published Willard's History of the United States, which included an atlas. Unlike many other atlases, this one began with the indigenous settlement of North America. 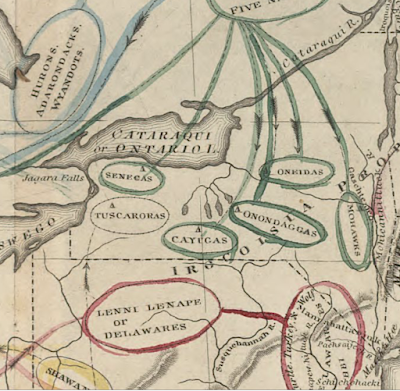 This "Introductory Map" shows the approximate locations of tribes. Arrows convey their movement. The map title is "Locations and Wanderings of the Aboriginal Tribes". Perhaps in a nod to the aboriginal people, the Atlantic Ocean is called "Salt Water Lake or Great Water".

The next map, the First Map of 1578 shows intersecting tracks of the European explorers and in pink Sir Humphrey Gilbert's patent, the first land patent granted by Queen Elizabeth I. 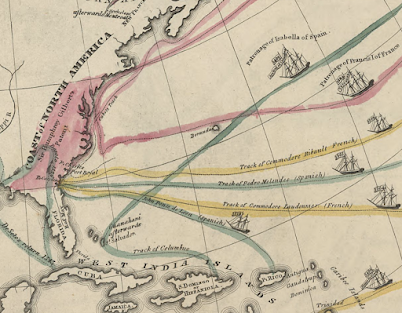 The "Second Map of 1620" has a similar look but the ships are for commerce, not exploration, including a Dutch ship "with negroes from Africa". The entire east coast up through New Brunswick is labeled as the North and South Colonies of Virginia and there is an inset map of the places at the mouth of the Hudson River visited by the Dutch. The rolling up of the left corner of the map is a nice touch that she employs frequently. The next group of maps show various wars with the indigenous tribes and between the British and French and then the gradual formation of colonies, followed by some Revolutionary War maps. It concludes with a map of the "Principal Seats of War 1812-13-14" showing the areas around Detroit, Buffalo, New Orleans, the Chesapeake Bay and St. Lawrence River. You can read more about Willard's life and work on the Worlds Revealed blog from the Library of Congress. The atlas can be seen here.

This map shows the international state of women's suffrage in 1908. It was originally published in Harper's Magazine and reprinted at ThoughtCo. 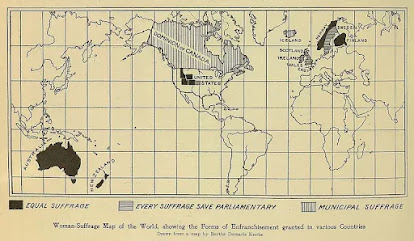 Full equal suffrage existed only in Australia, New Zealand, Norway, Finland and a handful of poorly drawn northwestern U.S. states. Finland also allowed women to run for Parliament. The "Municipal Suffrage" of Canada and Iceland meant women could only vote in local elections. The U.K. and Sweden vote in non-parliamentary elections.

This Wikipedia page gives more details. The page also mentions Latvia though not shown on the map. In many cases the right to vote was restricted for a time to married or property owning women. In Australia indigenous women were excluded from voting. It looks like Kansas is shaded in light gray though the Wikipedia page has that state granting women the right in 1912. Maybe it was being considered at the time. There was a gradual trickle of states between 1908 and 1920 when finally women were allowed to vote nationwide in the USA by the Nineteenth Amendment.

The War for Ukraine in Maps

I haven't thoroughly researched all media outlets but the maps from the Financial Times depicting the situation in Ukraine are the best I have seen. Click below to see a more readable version. 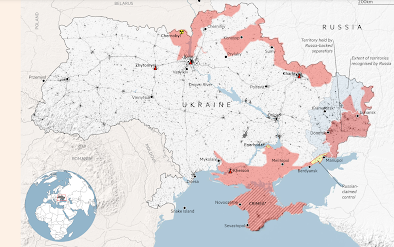 They are very subtle but effective without showing a large number of intersecting arrows or distracting explosion symbols. Here is their close up of the Kyiv region. 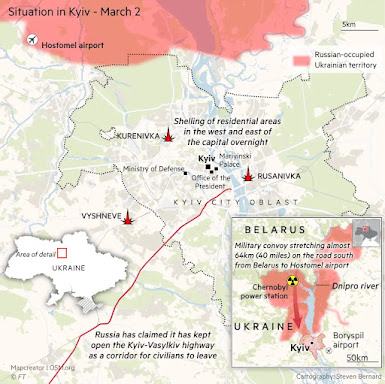 Finally, here is an elegant flow map showing the numbers of refugees and where they have been heading. 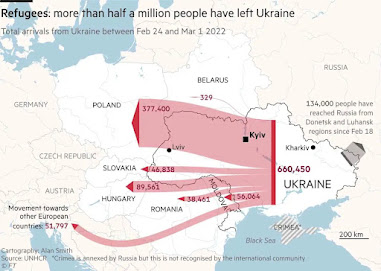 If you scroll down the page you can see maps from the last several days. It is interesting how little they have changed in the last few days despite all the carnage.