Back in 2006 Clockshop, a non-profit arts and culture organization did an "artist's billboard" of a map of CIA rendition flights. I'm not sure if this was in a gallery space or if it was an actual outdoor billboard. All they give you is an address on Wilshire Blvd in Los Angeles. 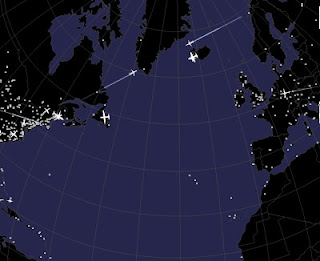 One of the artists - Trevor Paglen has taken it a step further and developed a web application where you can actually view the daily flights from 2001 to the present. Click the image at right and then click the flight viewer in the upper left corner of the page - very slow load warning!

Parts of his description of the flights are worth quoting here (the rest can be found on his page):
"These private charter planes often use civilian airports for refueling, making their movements subject to public record...the nature of the program has thus far remained out of reach to both American and International law...human rights activists are left to view their movements as a vast 'black box' and can only speculate whether any specific plane is currently carrying human cargo"
Posted by Dug at 11:01 AM 0 comments

Schmap is a Widget you can add to your website to post info about your team, band, city, or other interests. Better to show then tell.

Below you can see the latest exploits of my favorite pathetic hockey team - the Flyers. Click a puck and see how they did in that location - you can also look at the arena - this works better in baseball when you're not looking at roofs. If you don't like them, which you probably don't, you can change the team or even the sport by clicking the buttons up top. Above, for a more international perspective is everyone's favorite French league team Paris St Germain.

You can also put up a city tourist guide - I picked Baltimore in honor of the Baltimore Festival of Maps.

Or you can follow your favorite musician such as Avril Lavigne - well she's not really my favorite but I sure like that heart-bone logo.

Map of the Week 116-Baltimorrific!

For those of you like me who were foolish enough to miss the Chicago Festival of Maps, life has given you a second chance.
The Baltimore Festival of Maps begins Sunday with the opening of Maps: Finding Our Place in the World. This is the same exhibit that appeared at the Field Museum in Chicago, now making an east coast appearance at the Walters Art Museum in Baltimore. The Walters chose the London Glove map to represent their various mapping exhibits (there are several other exhibits and events going on at the museum).

As a fan of maps made by non-professionals, I'm really looking forward to seeing the Maps on Purpose exhibit. Art on Purpose, a community arts organization led various neighborhood map making workshops. Below are a couple of samples. Unfortunately the resolution on them is pretty coarse. 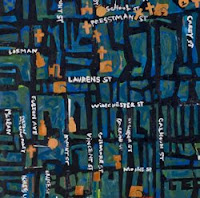 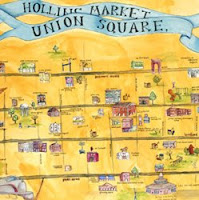 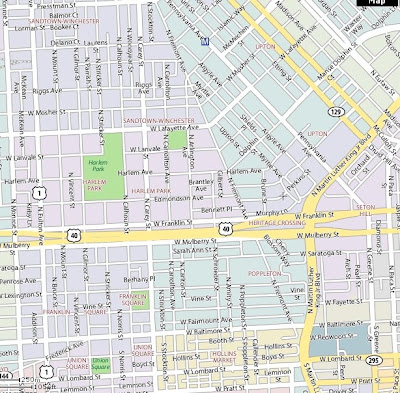 One thing I have not found on the festival site is a map locating the events. Maybe someone (her majesty?) knows something I don't. I took the map below from yahoo and outlined in purple the area of the neighborhood map above and marked the Walters in a red asterisk. Now you know where to go and what to do. See you there? 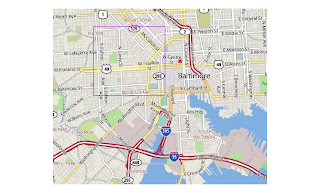 Map of the Week 115-The Oak Park Continental Divide

Continental Divides usually bring up images of snowy mountain peaks but sometimes the mountains look like this:

Yes the suburban folks of Oak Park, Chicagoland, Illinois have their own continental divide and they're proud of it! They even have a web page to showcase it. The map below is proof for skeptics - stand at the corner of Division and Elmwood with a cup of water and watch some of it flow to the Gulf of Mexico while the rest goes to the Atlantic via the St. Lawrence Seaway.

<- This is a detailed map showing the approximate line of the divide. My guess is that the storm drainage system adds a layer of complication, making the map approximate at best.
The map above can be further subdivided - if you do this enough times you will eventually find your own local continental divide that you can brag about!
Posted by Dug at 7:23 AM 5 comments