Promotional materials for the upcoming 12th edition of the Times Comprehensive Atlas of the World include these maps of the Aral Sea. The first one is from the 1967 edition of this atlas. 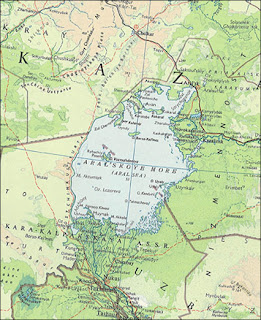 The second map from the new edition (2007) shows how much the sea has shrunk since then due to water extraction and climate change. The Russian government diverted the main rivers that feed it (the Amu Darya and Syr Darya) for irrigation. Now Kazakhstan and Uzbekistan have inherited a salty, polluted mess. But there may be oil and gas underneath so all's not lost. 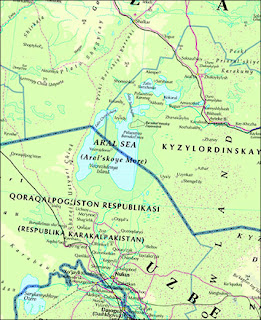 Oh and you're supposed to admire the nice Bartholomew cartography too!
Posted by Dug at 6:54 AM 3 comments

Map of the Week 109-Russian Claims in the Arctic

Put in your claim before it's too late! This is an excerpt from a story that appeared on the BBC this past August (2007). The text below the map explains the numbers.

"The Russians are leading a new 'gold rush' in the high north, with a bold attempt to assert a claim to oil, gas and mineral rights over large parts of the Arctic Ocean up to the North Pole."

1) North Pole: Russia leaves its flag on the seabed, 4,000m (13,100ft) beneath the surface, as part of its claims for oil and gas reserves
2) Lomonosov Ridge: Russia argues that this underwater feature is an extension of its continental territory and is looking for evidence
3) 200-nautical mile (370km) line: Shows how far countries' agreed economic area extends beyond their coastline. Often set from outlying islands
4) Russian-claimed territory: The bid to claim a vast area is being closely watched by other countries. Some could follow suit

Some interesting solutions that appear in this story:

The "median line method", supported by Canada and Denmark, would divide the Arctic waters between countries according to their length of nearest coastline. This would give Denmark the Pole itself but Canada would gain as well.

The "sector method" would take the North Pole as the centre and draw lines south along longitudes. This would penalise Canada but Norway and, to a lesser extent, Russia, would gain.
Posted by Dug at 6:46 AM 2 comments

OK - I couldn't resist the dopey cliche of stealing from milk commercials - everyone else is doing it!
The National Renewable Energy Lab in Golden, Colorado is working on an atlas of renewable resources for the USA. They have put together a bunch of maps showing potential development of Solar, Wind, Hydrogen, Biomass and Hydrogen as energy sources. Their color choices are a bit confusing but the patterns are clear enough. Here's a biomass map with their description below: 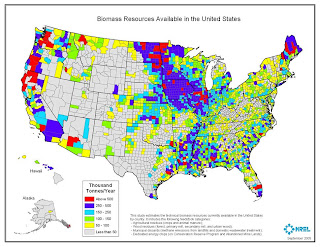 Of course when you normalize it by population the results are slightly different - especially down in the Southwest where they suprsize their counties: 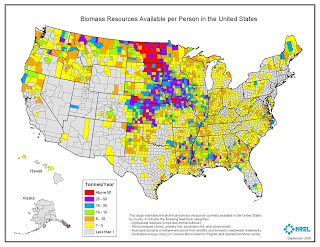 The Map of Mexico 1550 Project was designed by Lily Diaz, a professor at Media Lab Helsinki. The map is reputed to have been authored by Alonso de Santa Cruz, royal cosmographer to emperor Charles V of Spain. It resides at the Uppsala University Library in Sweden. She took a series of overlapping, stereo images of the map and pieced them together as one digital image. Then a series of historical points of interest were laid on top with descriptions, photos and web links. As you zoom in on regions of the map these squares will get larger and pop up information as you hover over them. The author's description of the map is below:

"Painted on two sheets of parchment joined together at the center, the map shows the city surrounded by water and with canals between its buildings. The clearly drawn roads over the mountains to other parts of the country permit us to retrace the routes taken by the Spanish conquerors. The map also provides abundant information about the ethnography and the flora and fauna of the region during the early colonial days"
Posted by Dug at 1:56 PM 3 comments

Map of the Week 106-Where in the World is Episkopi Cantonment?

According to Wikipedia the first newsworthy event of 2008 was that Cyprus, Malta and the Sovereign Base Areas of Akrotiri and Dhekelia adopted the euro. The sovereign what of where? 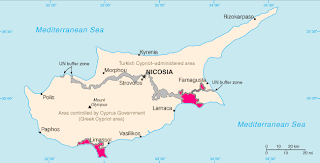 Oh, there!
Even a geographer like me was unaware of such places. When Cyprus was granted independence by the British Empire in 1960, the Brits insisted on holding on to these military bases. However, unlike the mother country they have decided to adopt the euro as a matter of practicality given that they are on an island where euros are now the currency. Above is a map of Cyprus showing the location of these two areas and below are detailed maps of the areas - all legally stolen from the CIA and wikipedia.