The Album Covers of New York

A few years ago I did a post on maps on album covers - and a follow-up based on reader suggestions. Here is a map of the locations shown on album covers from Uebermaps, a collaborative platform that lets you create and share maps with others. 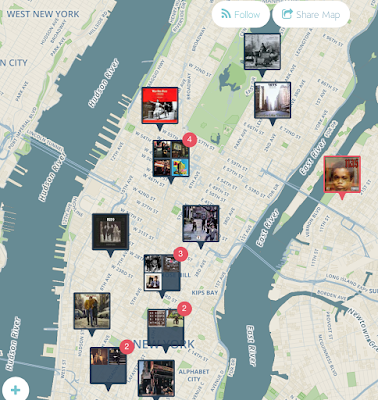 The above parts of Manhattan and Queens cover all kinds of stuff from West Side Story to Nas. A close-up of the Lower East Side takes in Bob Dylan, Foghat, the Rolling Stones, Velvet Underground and Led Zeppelin. 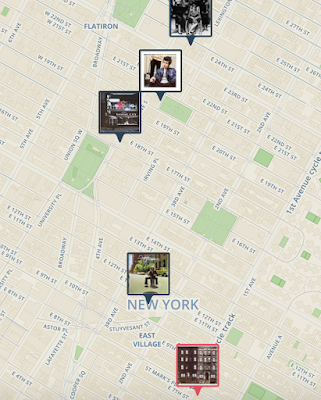 Another user created a map just for places mentioned in Bob Dylan songs. There is a clear spatial pattern of his wanderings. 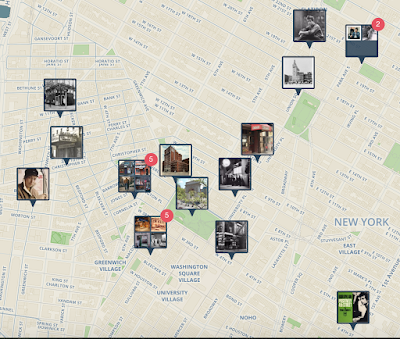 Uebermaps showcases various other public maps, many in Europe such as this one showing record stores in Hamburg. 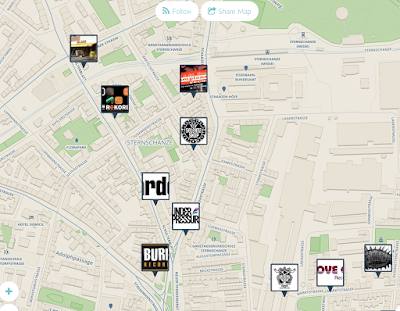 You can create your own account, take pictures and make your own maps. You can also embed them into your own site like this.

The Aboriginal Language Map is an attempt to represent all of the language, tribal or nation groups of Indigenous Australia. Large groupings of people are mixed with smaller clans, dialects or individual languages. Created by David R Horton, it is based on language data gathered by Aboriginal Studies Press, AIATSIS and Auslig/Sinclair, Knight, Merz, (1996). 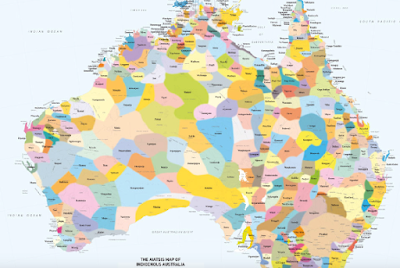 The page has a nice magnifier so you can see the wealth of detail. 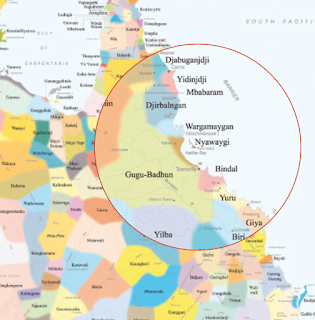 Some areas such as this part of the northern coast have some remarkably detailed diversity. 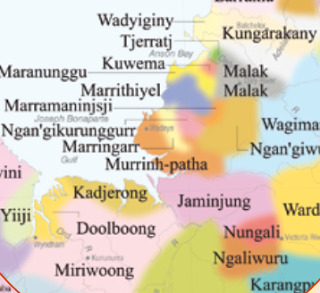 Cities appear on the map but the text is muted so the important details stand out. 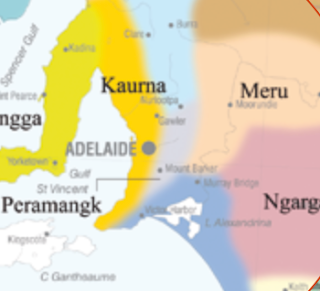 In several places they mention that the map is not suitable for native title or other land claims. It is useful though for distinguishing between Waka Waka and Gubbi Gubbi. 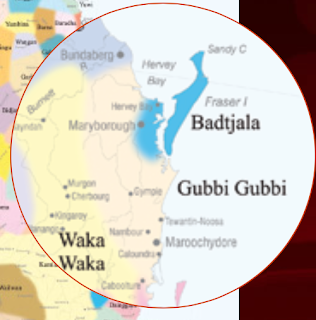 This map was produced by the Automobile Club of Southern California in 1915. It shows a 60-mile round trip from Los Angeles to Topanga Canyon.

Click to see it in higher resolution. Here is a detailed view if you don't feel like waiting for the image to load. 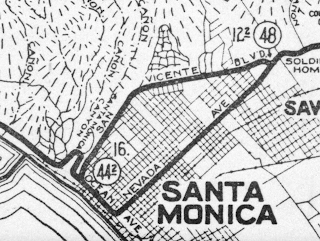 There are lots of nice details, including hatch marks for the hills, generalized grids in the built up areas, and grade percentages listed in the canyon. The mileages are marked in circles going counterclockwise from downtown LA. Seems odd that they would send you in that direction (all left turns) but maybe left turns were not a big deal in 1915. Reverse-direction mileages are also listed.

The map gives a good indication of what areas were settled in 1915. In addition to the obvious missing freeways there are also numerous boulevards that had not yet been built like Sunset Boulevard, west of Hollywood. Nevada Avenue shown in Santa Monica is now an extension of Wilshire Boulevard.

If you like this map, there's a treasure trove of Automobile Club of Southern California maps available from the USC Digital Library. Most of these are trips from or around Los Angeles. Some good auto club maps of San Diego can be found on John Fry's page - for example this one. 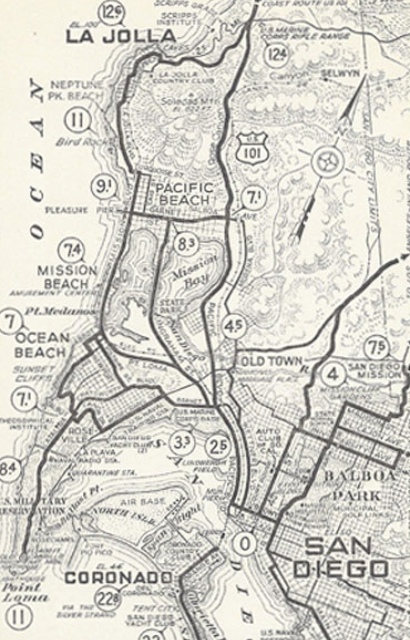 On a recent visit to Philadelphia, I came across Zora Plays, a playground mapping and documentation project by Michael Froehlich and his daughter Zora. They began visiting nearby playgrounds in West Philly, eventually expanded throughout the city and have now documented 162 playgrounds. Each has a detailed map. 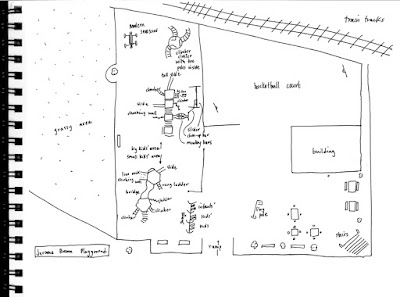 This is the Jerome Brown Playground in North Philadelphia. A close-up shows the remarkable level of detail, especially considering how many playgrounds they have visited. 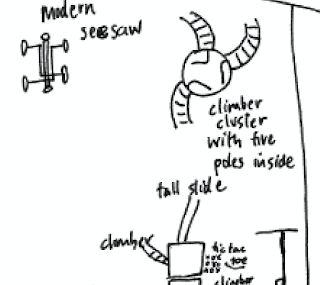 There are detailed reviews of each playground and lots of photos. I'm impressed that they have fearlessly ventured into some pretty rough neighborhoods with open minds and found some very nice playgrounds there - and a few that could use some TLC. Each page includes a linked google map like this,


and there is also an interactive map so you can browse geographically. 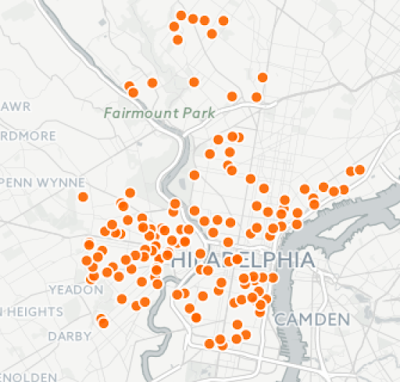 There is a link to reviews on a similar blog, the Philadelphia Playground Project. That project has covered the city more completely but they didn't map the playground facilities. let alone do it with this level of detail. 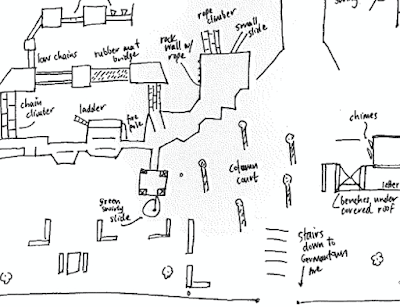 On my childhood visits to my Grandmother's apartment, I remember playing in Rittenhouse Square. There is no playground there (though climbing on the goat statue was lots of fun) so it does not make this list. However, nearby Fitler Square with its bear and turtle sculptures is on the list so I will finish with a map from my personal past. 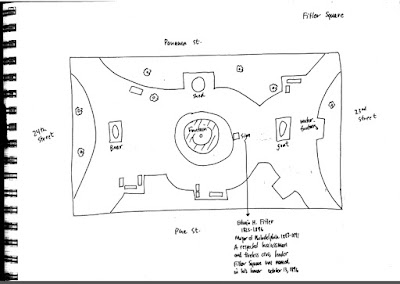