In 1942 this map was published in Japan for children so they could follow the progress of the imperial forces during World War II.

Japan, occupied and allied countries are shown in bright red. The map is full of caricatures of the natural resources of each area. Bold red arrows show the hoped direction of conquest. 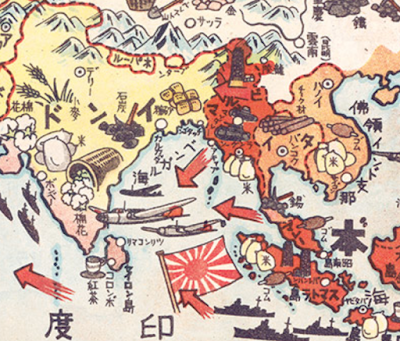 Here are some details from northern Africa and southern Europe. 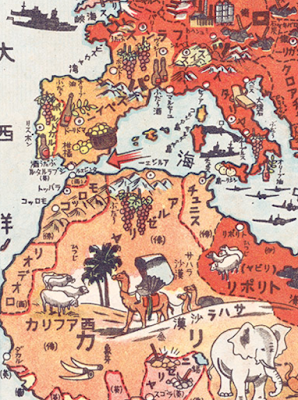 The map, titled "From the East, from the West" was produced at the high point of Japan's war effort for a children's publication.

-via History Today - where you can see the entire map.
Posted by Dug at 6:11 AM 0 comments

Mexico City, one of the world's largest urban areas is built on a lake. The Aztecs built what was Tenochtitlán on an island in Lake Texcoco, connected by causeways to the mainland. 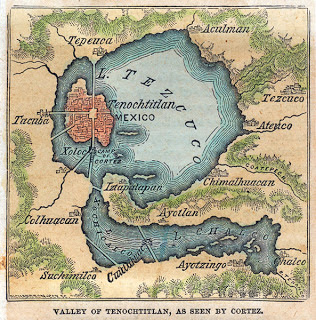 When the Spanish arrived they decided to expand the city by draining the lake. They did not manage the water properly as the Aztecs had done. Draining and pumping water from underground has caused the city to sink. This in turn has caused very frequent flooding and also ironically made water scarce.

I was curious to see what areas of the modern day city sit on top of the ancient lake beds but have not found a map on the web that makes this very clear. This circa 1519 map on Wikipedia shows some locations, but not the modern urban area. 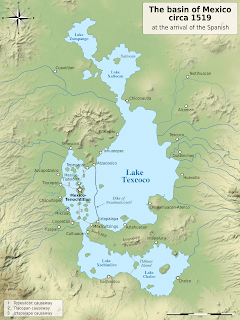 I took the .svg version of this map through a complicated software process and georeferenced it as best I can with my limited knowledge of the area. Here are two versions of this map overlaid on two different base maps to give and idea of where the ancient lake was. The first is on a National Geographic map via ESRI. 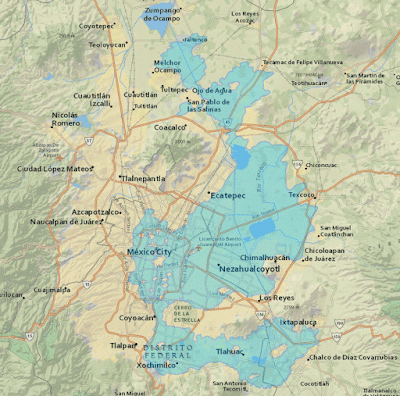 Keep in mind that the location of the lake is based on my best estimates. To avoid the assumption of higher level accuracy, I did not make a zoomed in version.
Here is another version using CARTO for the background. Each map has its advantages and disadvantages for legibility. On the one below, you can see the subway network which is kind of cool. 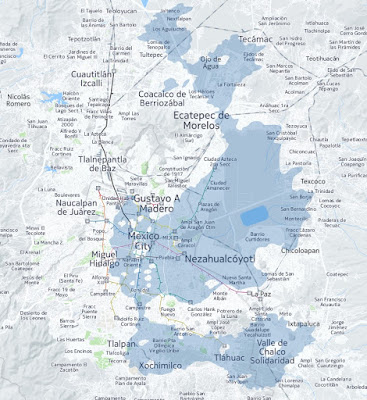 There are some interesting ideas of how such a large city can cope with the ecological and public health problems it faces including an ambitious proposal for a 145 million square mile Lake Texcoco Ecological Park - 23 times the size of the city's huge Chapultepec Park. Clicking the numbers on the map below, you can see some of the proposed projects. The Texcoco Lake Ecological Park will become a tangible symbol of how our society can enter as an integral part into natural processes and help the proper functioning of the landscape.

Lake Texcoco Park is a work in progress, a vision of a remarkable place conceived by a collaborative group of scientists, engineers, biologists, chemists, ecologists, architects, urban planners, landscapers, and politicians.

Every vehicle transmits its location and Transport for NSW has opened the data to the public. It shows all buses, trains, light rail, ferries, delays and track inspections. You can filter by vehicle type. The screen below also serves as a legend of sorts. Trains are in orange, buses blue, light rail red, and ferries green. 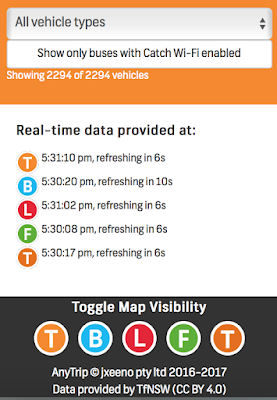 You can also see an online version of the station signs. 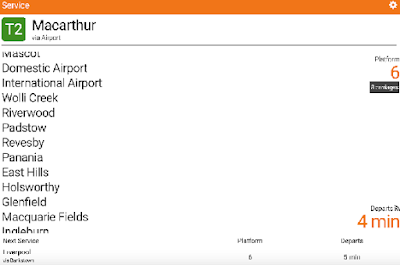 Just watching all the vehicles moving around is mesmerizing

NOTE: If you are in North America and looking at this early in the day, you won't see much activity because it will be the middle of the night in Sydney. Wait until later in the day and then see how things pick up.

2. Will Geary, a data science student has created this wonderful video of a day's transit in New York and suburbs. It is not real time data like the one above but does show an incredible wealth of data - and comes with musical accompaniment!

I'm not much of a video game player so my ignorance of these things will be pretty obvious to the average gamer. Many video games have cool maps. What's interesting about the geography of Grand Theft Auto is that it is only sort of fictional - the names are different but the places are obviously recognizable. Here is a user created map of San Andreas created by Brazilian user DaniLekBom. 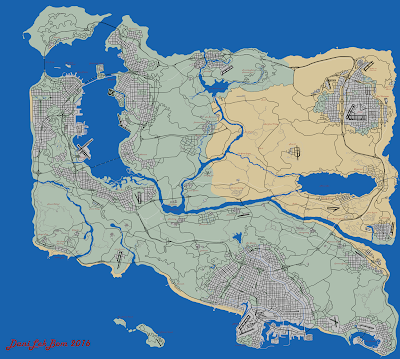 Names like "San Joan" and "Oakplace" are pretty thinly disguised. I like how he squeezed "San Donado" down at the bottom. You can just about see where the ESRI user conference takes place. 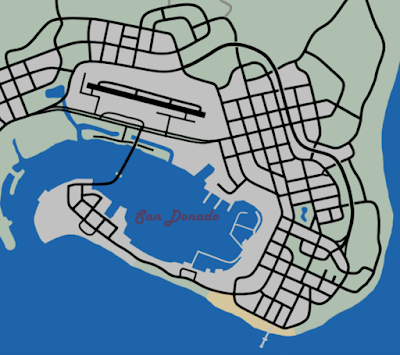 There's also a city in the desert. It's called Las Venturas. It has a strip! What was that inspired by? A couple of mysterious places inland like Endsville, Grapeseed and Coconut Springs have less obvious corollaries.

Vice City is another common locale in the game. Sometimes referred to as Vice-Dade County as if it wasn't obvious enough where it is. 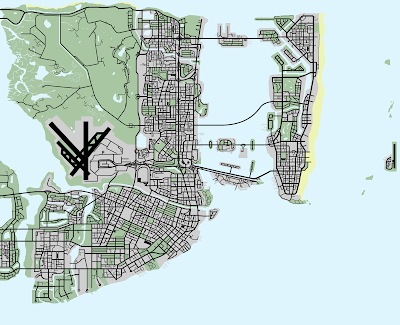 Liberty City is also a very familiar looking place. Here's a nice map of it. Lots of green spaces - including a largely empty "Staunton Island." 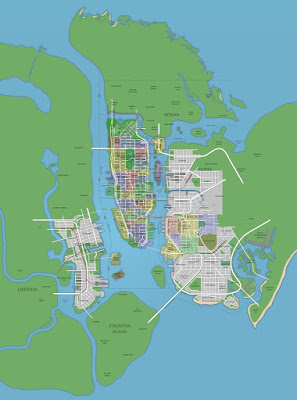 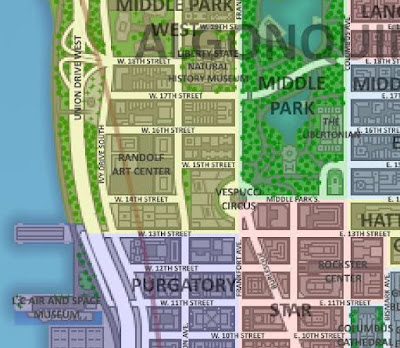 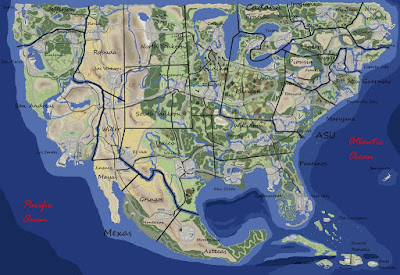 I like how the Dakotas are renamed North and South Yankton and New Jersey becomes New Guernsey.

You can find these, and many more maps, including Europe, Asia and Africa on the GTA Mapmaking Forum. 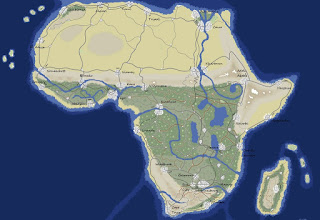 NOTE: This is not an endorsement of a violent, sexist video game that may encourage crime and DUI (I don't know, I've never played.)  I'm only here for the maps.
Posted by Dug at 5:50 AM 0 comments