Last week there was an article in the Washington Post titled This is the one map you need to understand Ukraine's crisis. The "one map" is actually two maps, both with fairly awful color and symbol choices. 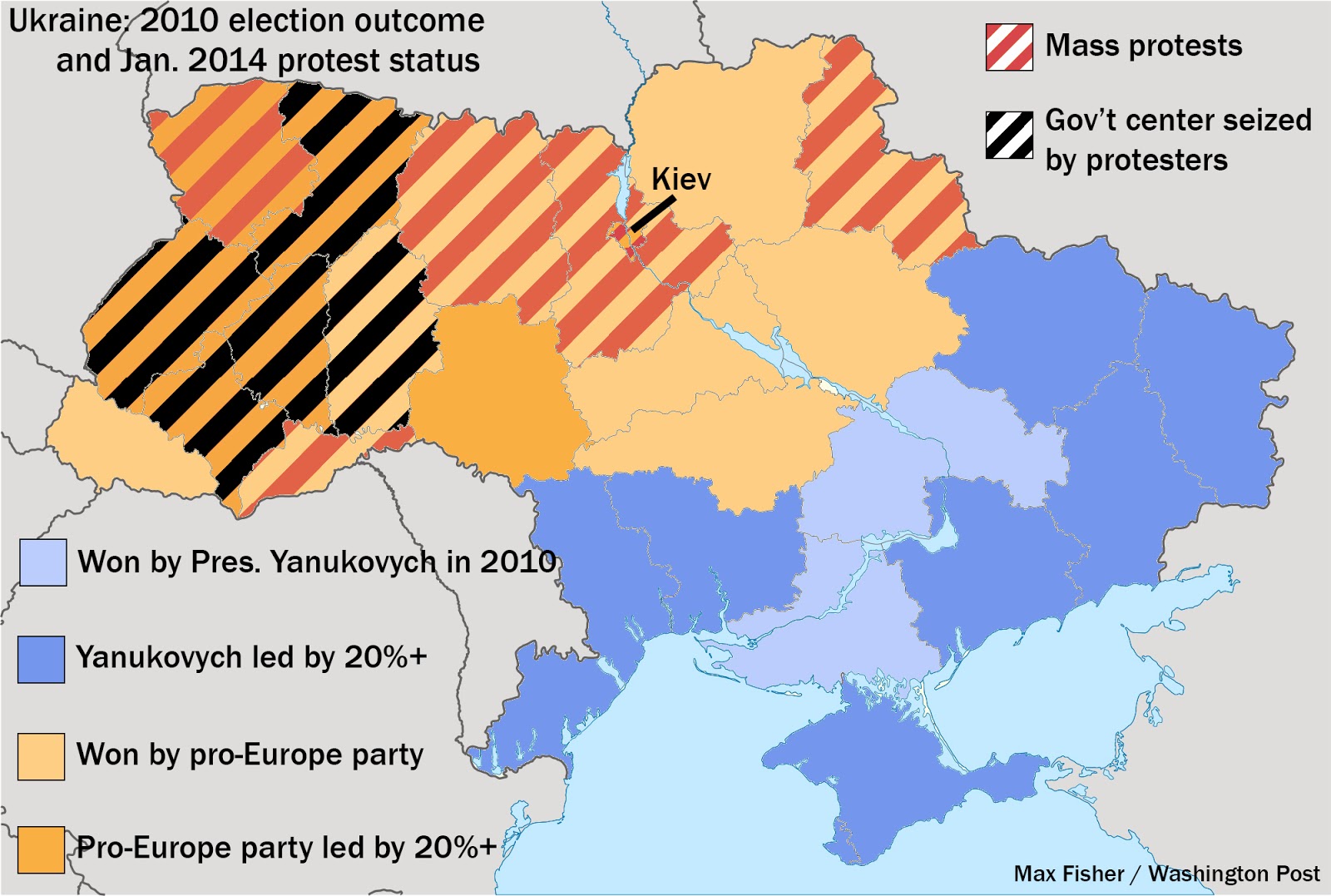 First, there's the color scheme. The orange is fine but the blue is way too similar to the water. So similar that the Sea of Azov (between the Crimean Peninsula and the easternmost provinces) looks like a province that was won by Yanukoyvich. Looking from a distance you can see that he also won that huge southern region - oh wait, that's the Black Sea!

On top of this confusion, the author represents the areas of protests with diagonal lines that are so fat you lose the light-dark orange pattern of support for the "pro-Europe" party. He could have thinned these lines to make the map more readable. Better yet, since protests happen in isolated places a point symbol would illustrate them without confusing the color scheme. If you want to be dramatic, use a nice explosion symbol like this one.

Finally, there's Kiev. The black line pointing to it is the same color and angle as the government centers seized by protesters symbol, making it look like it's been seized. In fact, some government buildings in Kiev have been seized so maybe the author was trying to be ambiguous.

The second map is a linguistic map with the same color scheme. The article does succeed in showing that the political and linguistic divisions break along the same provincial lines. All other information is obscured by bad cartography.

It's really too bad they did such a poor job with this because just last month the same author presented a similar series of maps that are much more legible. In an article with a similar title, This one map helps explain Ukraine's protests, he uses a similar election map but with a slightly better purple color scheme for the Yanukoyvich vote. This time the "one map" is actually three maps, two election maps and an "ethno-linguistic" map from Wikimedia Commons. The linguistic map does explain the divide nicely though the categories are a bit vague (predominantly vs. mostly vs. ethnic majority - huh?)

Location: Ukraine
Email ThisBlogThis!Share to TwitterShare to FacebookShare to Pinterest

Iraq's Shiite government has decided "in principal" to create three new provinces to address Sunni grievances, counter Kurdish expansion and possibly, to appease Christian and Turkomen minorities. I immediately looked for a map but there is none because the government has only described it in general terms. The idea is to create a province around Fallujah, and two others on the edge of the Kurdish regions, in the Nineveh Plain and around Tuz Khormato. Here is a map from the Public Intelligence Blog showing where these provinces might be.

The text on this map is tiny and weak on descriptions but the color scheme nicely illustrates the ethnic and religious areas and where they mix. The article describes the situation in more depth. The black outline is the area with Christian minorities that could compose the Nineveh Plain province while purple outlines the Turkomen minority areas including Tuz Khormato. Fallujah is the yellow star in the middle of the country.

The map above does not show the current provinces. To get both the provinces and cities here's a map from Maps of the World. Fallujah is not shown because it is not a capital but it is near the bottom of the "f" in their watermark, between Baghdad and Ramadi. Nineveh is Ninawa on this map. 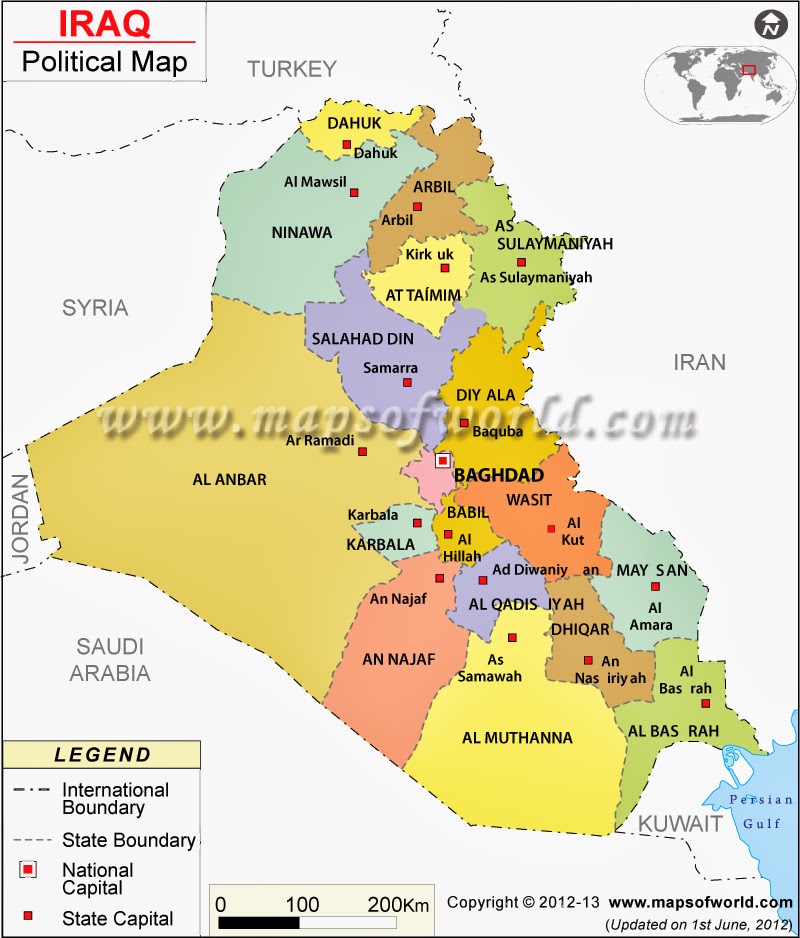 Finally, for some classic sarcasm there's this map of the provinces of Iraq. The author showed an admirable respect for the actual provincial boundaries. 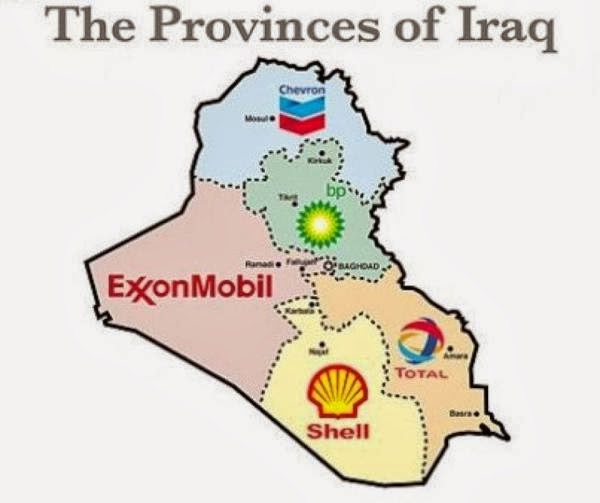 Location: Iraq
Email ThisBlogThis!Share to TwitterShare to FacebookShare to Pinterest

I am at the Brattleboro Museum in Vermont admiring Jerry's World, a fantasy map extravaganza that's been highlighted in a previous post. 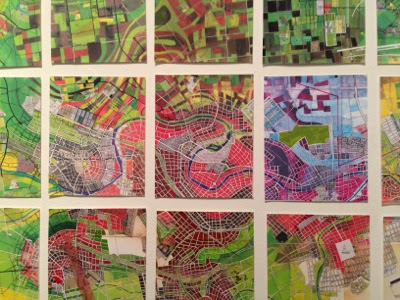 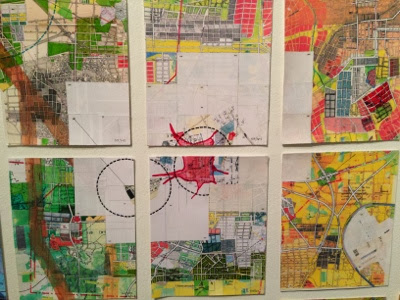 fortunately some places are protected by a defense wall. 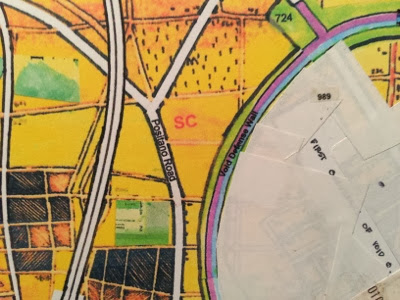 A little history about a specific void is detailed in the text below. 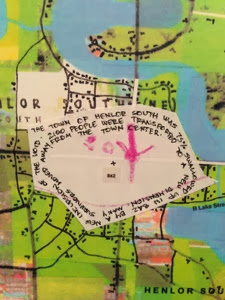 Outside the main urban area things get wavier 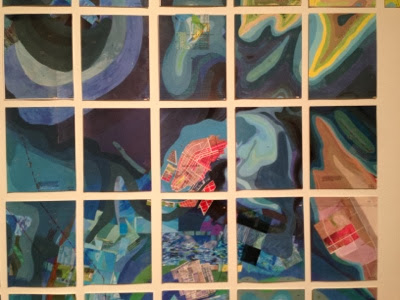 At the far edges you might find beer and graham crackers. 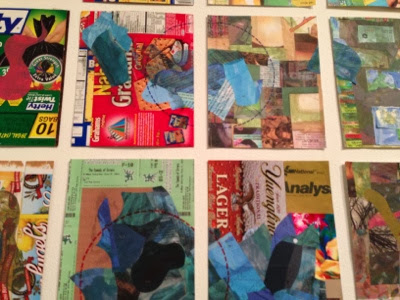 Here's a whole wall of it. 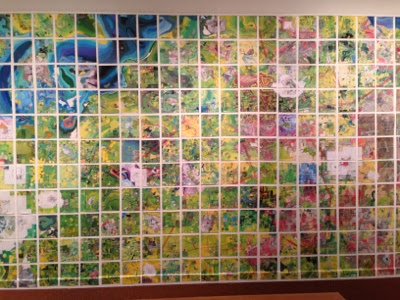 This map shows it all with the section shown here outlined in orange. The entire world (purple outline) is on exhibit at Summerhall in Edinburgh, Scotland until January 24th. This exhibit will be at the Brattleboro Museum until March 8th. 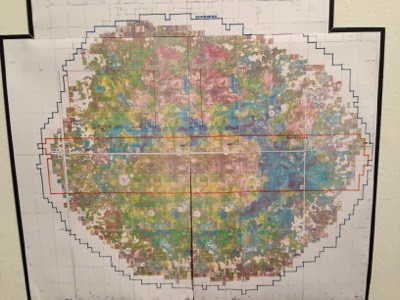 I've received about a dozen emails recently alerting me to the "(insert a number) Maps that will Change Your Life, Promote Good Dental Health, and Help You Lose Weight" type of articles.* Most of their titles are overly dramatic but good for getting the clicks. Many of the maps featured are difficult for a jaded cartographer to get excited about. However, this map of Iceland from Wired Science's Most Amazing, Beautiful and Viral Maps of the Year (2013) really stands out. 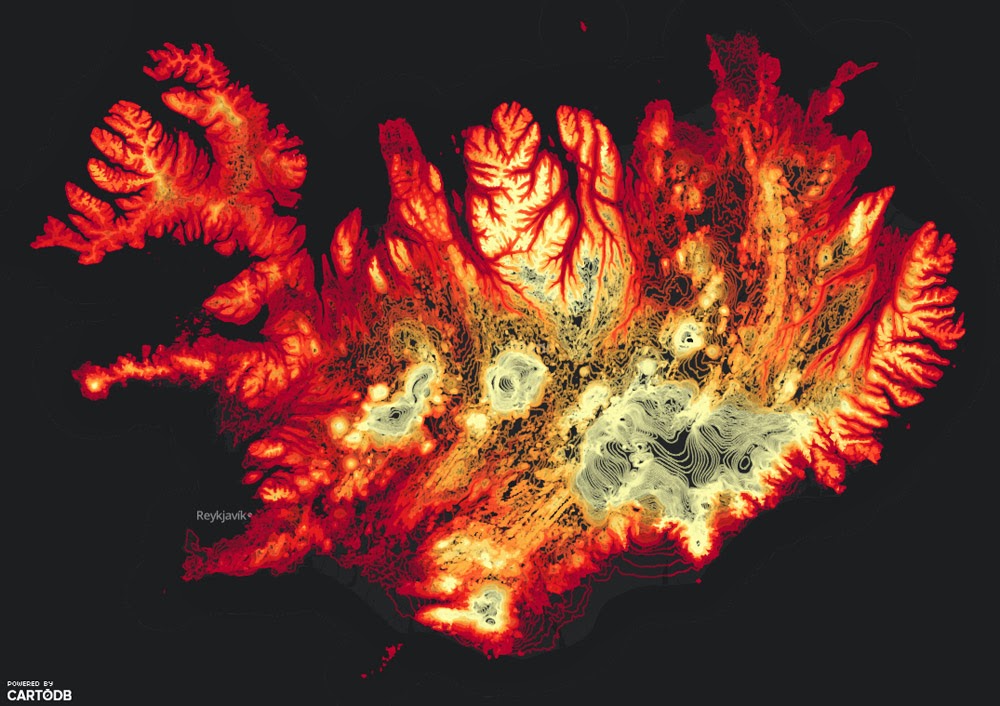 The concept is very simple, even though the process was a little convoluted. It is just a series of 20 meter contours classified by color. The yellow to orange to red color scheme is unusual and creates an arresting fiery look. Of course the volcanoes (the fiery places) are the lightest yellow making the color scheme less realistic but if you reversed the colors the image would lose its dramatic effect.

Another sacrifice is that the background land and water are barely distinguished, very dark grey for land and black for water. You have to zoom in a ways on the interactive version to see the distinction. This adds drama by making the coastline look much more jagged than it really is. Here is an example where you see some false bays around Húsavík in the northeast. 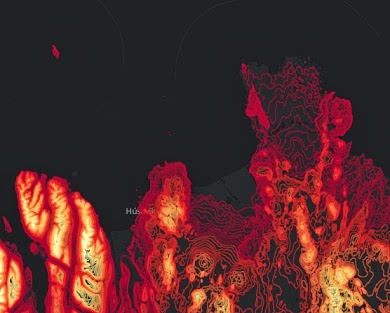 Compare that with google maps 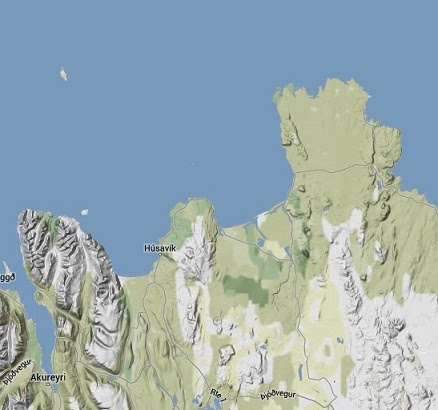 It's a nice striking representation, just don't try to use it as a nautical chart.

*friend of the blog Michael5000 has a fun and well done critique of one of these listings here.
Posted by Dug at 7:50 AM 0 comments

The United Watershed States of America 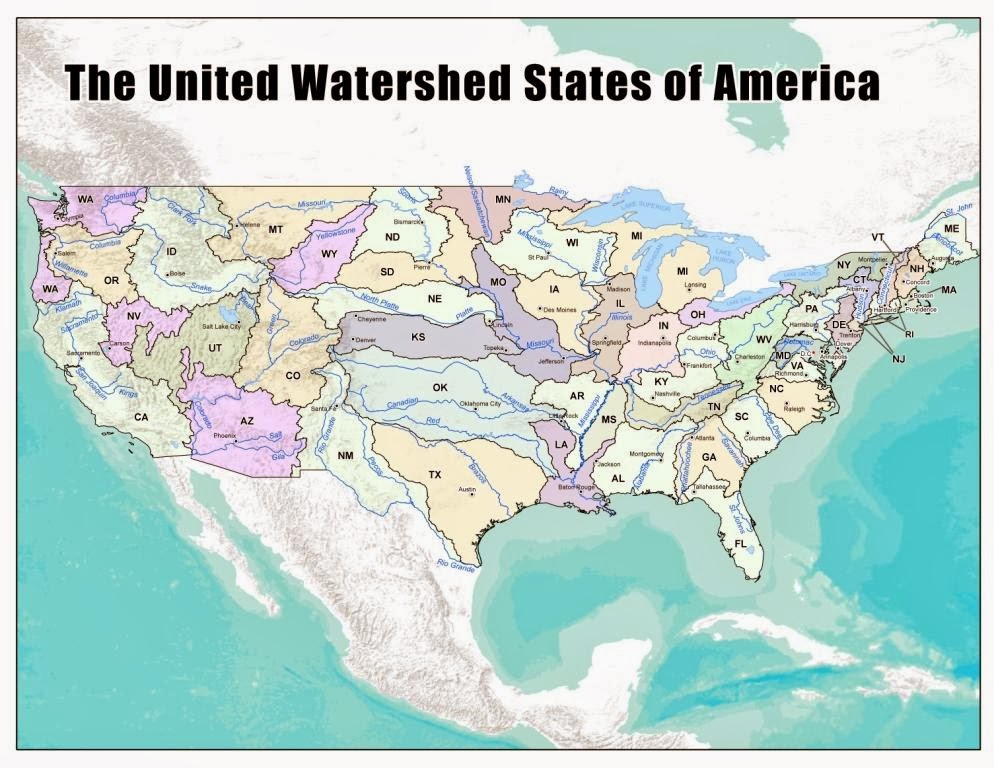 John Lavey, a land use planner from the Sonoran Institute has resurrected John Wesley Powell's 1879 proposal that states be organized around watersheds. Powell reasoned that new states in the arid west would conflict with each other if watershed boundaries were ignored. His ideas were rejected in favor of railroad and agricultural interests and the conflicts he predicted are still ongoing throughout the region. Here is Powell's drainage basin map.

Lavey quotes Donald Worster, author of Dust Bowl:The Southern Plains in the 1930s speculating that the massive urban growth of western cities would not have happened because cities would have had to deal with local watershed groups to secure their water rights. For a more detailed analysis see Lavey's post on Community Builders.

I have many disagreements with Lavey's organization of states. 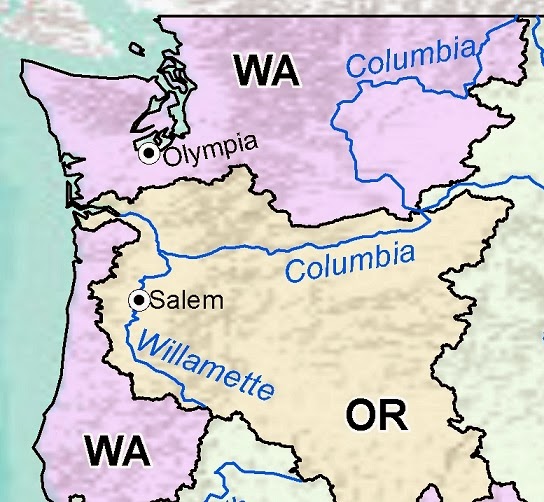 This is all theoretical anyway as we're not going to change our state boundaries anytime soon.
Posted by Dug at 8:08 AM 2 comments

The image in the header of this blog is a 1753 map of Philadelphia. On the far right is the Frankford neighborhood along "Franckfort" Creek . The Mural Arts Program has collaborated on a mural based on this map located nearby under the elevated SEPTA Market-Frankford Line. Here it is as I see it right now. 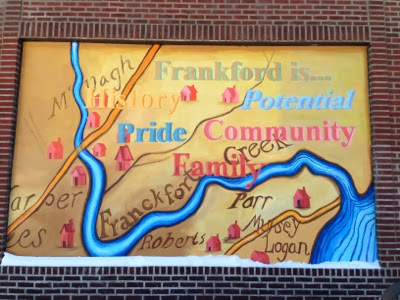 The view from snowy Womrath Park. 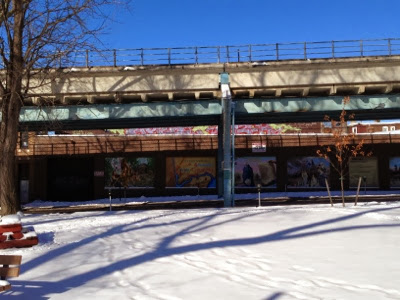 Labels: art , philadelphia , where I am right now