Map of the Week-Pakistan Floods

Flooding in Pakistan has affected more than 17 million people and is "the worst natural calamity of its history" according to Prime Minister Yousuf Raza Gilani. In addition to the 1.2 million homes that have been destroyed there are also problems with water borne diseases, sanitation, lack of medical staff and supplies, destruction of agriculture and growing political unrest. See the BBC for sources and details.

The floods have destroyed more than 17,000 sq km (6,600 sq miles) of land and affect a huge percentage of the country.

Comparing this area side by side with a population density map from Wikipedia gives a good picture of the degree to which the population of the country has been affected.

A list of places to donate money or supplies is available at the Pakistani site Chowrangi.
Posted by Dug at 6:49 AM 0 comments

Confusing Map of the Week-Oil and Much More

Preemptive Media is an organization that lets participants monitor air quality with GPS enabled monitoring devices. However, this post is not about that. This post is about the confusing map they have posted on their web page.

It's an interesting visualization but full of cartographic problems. First of all too much information takes away from the focus on US oil imports. The title and blocks of text at the bottom about gas and coal confuse the reader about what the map actually shows. It's not a map about all fossil fuels, just one. The country sizes are also confusing - is this supposed to be a cartogram? I'm pretty sure it's not. The colors? I guess they're just colors and have no additional meaning. They did get it right in sizing (by width) the connecting pipelines according to the number of barrels a day we import.

Nevertheless this map does show some interesting statistics about where our oil comes from. Canada and Mexico are our top two sources for oil? Ecuador's in the top ten? Who knew? I also like the chart at the lower right showing how we create greenhouse gases.
Posted by Dug at 6:32 AM 1 comments

One solution to the "Fossil Fuel Fix"

Get a zero emissions car and race it around the world! The Zero Emissions Race is sending four teams (Switzerland, Germany, South Korea and Australia) on an "Around the World in 80 Days" race. The vehicles are all electric and the costs of the energy (including transport across two oceans) will be "offset". They left from UN Headquarters in Geneva, Switzerland on Tuesday and two of the vehicles are currently in Mainz, Germany. 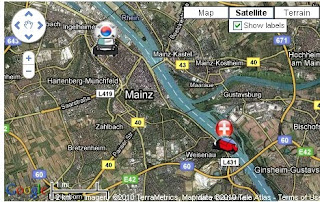 For some reason the other two vehicles are nowhere to be found.


Here is the route they will be taking around the world. 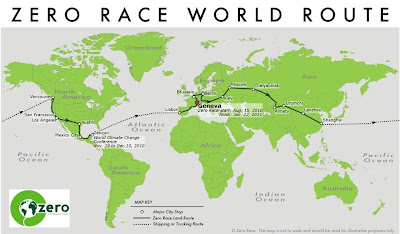 Hoboken, New Jersey, the hometown of the overrated Frank Sinatra and way underrated Yo La Tengo has stepped to the forefront of urban transportation policy with the introduction of Corner Cars.  The program is a partnership between the city and Hertz. Like any other densely populated area, the city has a major parking problem. By placing 50 rental cars around the city they hope to remove over 750 cars from the streets. Here is a map showing the location of the first group of cars. 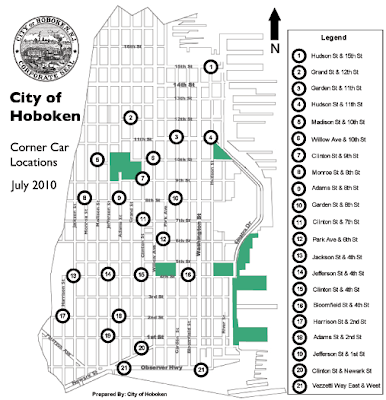 The cars are placed so that 90% of the city's population live within a five minute walk of a car as illustrated by the map below. They have assigned spaces so you know where to find them and where to park when you're finished. 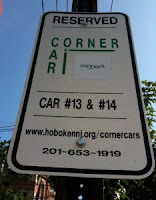 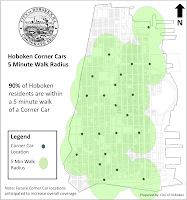 If you choose to use the local bus service instead the city also provides you with a map showing the live bus locations. 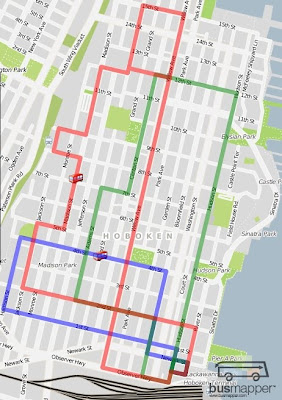 Now what's your excuse for keeping your car? You probably don't live in Hoboken, that's what.
Posted by Dug at 6:26 AM 1 comments

When you shift an entire state northward strange things start to happen. Philadelphia and Scranton disappear, the Maryland border runs across the middle of the state and the Susquehanna River starts flowing into the Delaware.
Thanks to Card Cow for the image. 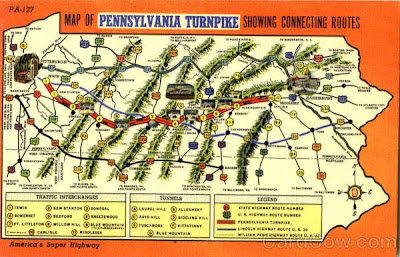 Description:
America's Super Highway. Throughout the entire length of the Turnpike gasoline service stations and restaurants are located on both sides of the roadway at staggered points. The stations provided by the Standard Oil Co. Of Penna. Are unique and de luxe. They are built along early Pennsylvania architectural lines. the adjoining attractive restaurants are operated by the famous Howard Johnson