NPR's Science Friday had a nice piece last week on redesigning transit maps. The program features MIT’s Ruth Rosenholtz, a cognitive scientist and the University of Essex’s Max Roberts, a transit map researcher and lecturer. According to Rosenholtz, 99% of our visual field is peripheral. She analyzes maps from this standpoint and has an algorithm to show how they look in peripheral vision. For examples, Boston's MBTA map does pretty well... 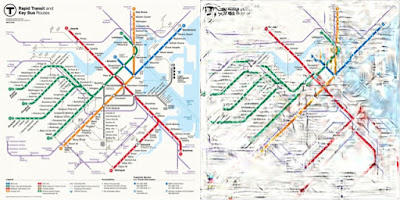 while New York's subway map is much more blurry. 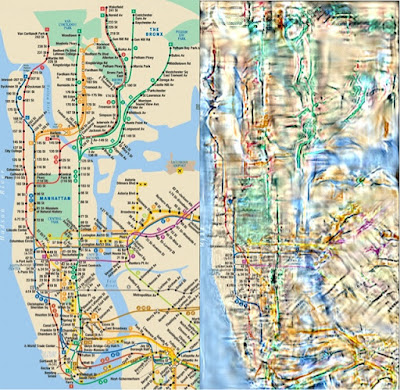 I do wonder if the white background version from the Other Map Flavors page would work better. Also we are comparing two very different levels of complexity here. 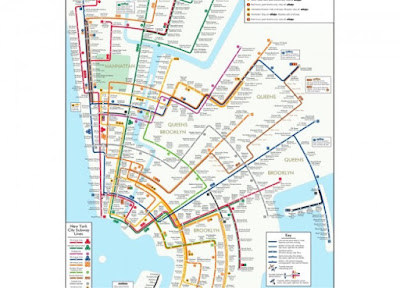 When I first saw this map, I was underwhelmed and a bit bothered by the geographical distortions but after hearing him explain it, I can see how it does help untangle the lines and make trip planning more straightforward. His Paris map on the other hand is an obvious (to me) improvement. 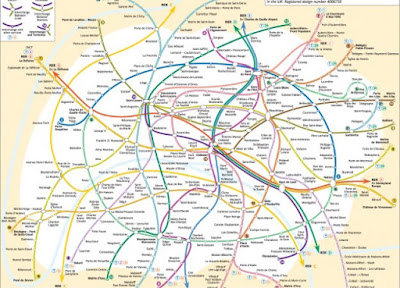 Compared to the original.

These curvy maps do better on Rosenholtz's peripheral tests (though no examples were provided) and also did better on tests by Roberts. In his tests subjects were able to plan a trip in much less time. 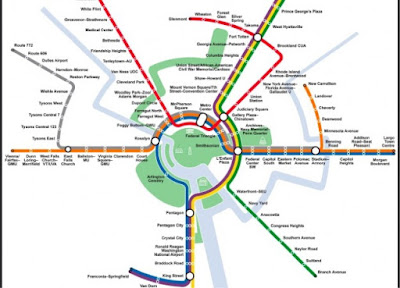 Chicago is interesting too. I'm not fond of the giant loop-a little too distorted for my tastes. Roberts explains that a diagram should show you how a network works rather than where things are. From that standpoint these maps work well. Just don't expect to be able to walk from Rosemont to Harlem on the blue line in the same amount of time as it would take to get from Jackson to Washington. 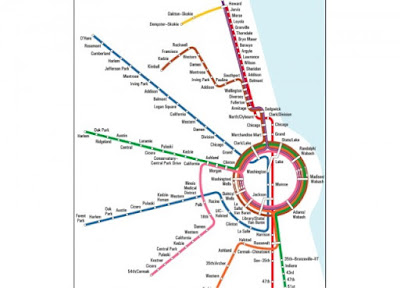 Listen to the broadcast here.
Posted by Dug at 11:06 AM 0 comments

Macleans magazine bought this map from the Canadian government. It is from 1955 and details "100 Important New Resources That Will Help Make Canada's Future Bright And Prosperous" - 1950's booster-ism at its finest. 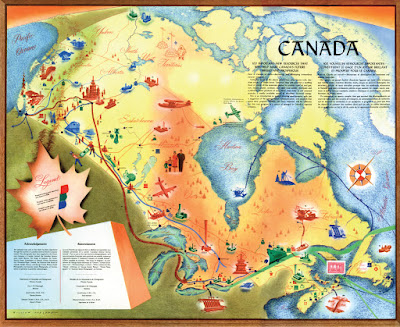 Here is a close-up view showing details such as petro-chemical and nickel leaching plants near Edmonton, a nationwide microwave net for TV, far-reaching rural electrification, gas turbine locomotives and a money tug of war with the United States. 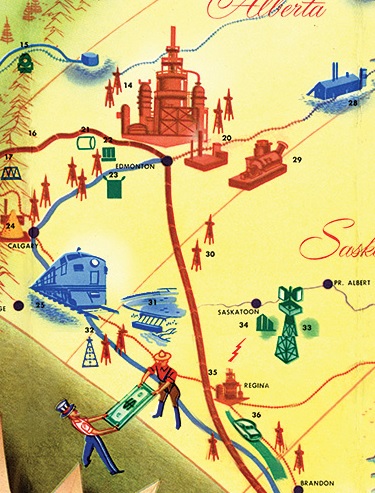 Sample text from the title block


"Yesterday many of the places shown here were barren rock, desolate tundra or virgin forest. Tomorrow they will pour out a swelling flood of nearly all the materials needed by modern man...."

I'm not sure if the colors (green, yellow and red-ish) mean anything (elevation?) or if that's just an artistic effect. Also, the leaf-like channels within the Great Lakes are a strange touch. 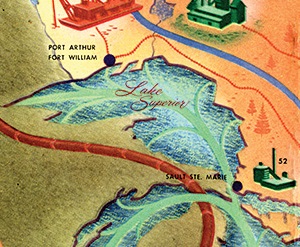 The Macleans article has a nice selection of items from the map showing which predictions were good (tar sands oil) and which were overly optimistic (potash.) Some other interesting items not covered in the article: 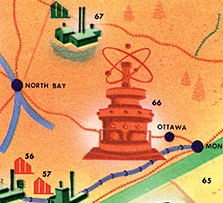 I included that last item because I spent time in Chalk River as a graduate student and got to know some of the nuclear plant workers.

A complete list of all 100 resources can be found here, while a larger version of the map is here.

The "Red Zone" in France

The Red Zone is a series of areas in northeastern France that were isolated by the government after World War I. These areas were too damaged by the war for agriculture or human habitation. Some small areas remain off limits. 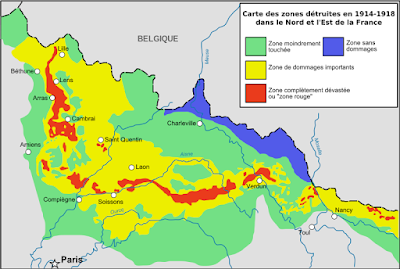 The red zone on the maps refers to completely devastated areas and the yellow areas have major damage. The green areas only had minor damage and the blue area was undamaged. The red zone is still full of unexploded shells and the soil is polluted by various chemicals and human and animal remains. From Wikipedia:


Each year dozens of tons of unexploded shells are recovered and, according to the Sécurité Civil agency in charge, at the current rate no fewer than 700 more years will be needed to completely clean the area. Some experiments conducted in 2005-06 discovered up to 300 shells / 10.000m² in the top 15cm of soil in the worst areas.
Some areas remain off limits (for example two small pieces of land close to Ypres and Woevre) where 99% of all plants still die as arsenic can amount up to 17% of some soil samples. Most destroyed villages lie in this area.

Some of these areas have been set aside as artificially planted state forests but the trees are in poor shape. Other areas have been cleared for agriculture but concerns about pollution remain. Much more detailed information can be found on the French language wikipedia page.

The Island of Bad Art

Artist Grayson Perry created this etching to look like a Renaissance-era map of Venice in conjunction with the 2013 Venice Biennale. The place names reflect Perry's categories of bad art-here are some examples. 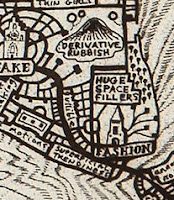 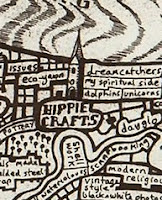 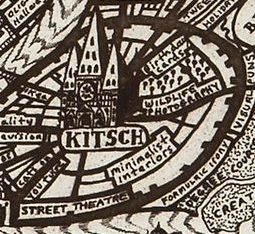 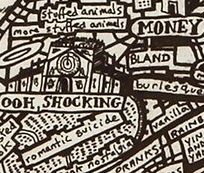 Based on some of the internet commentary he seems to have offended many people which is what art should do. It may be a bit snooty, but the mappy details are well done and enjoyable. Click below for an enlarged, readable version. 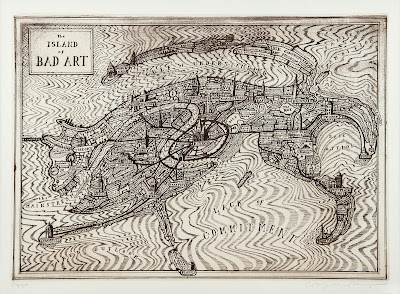 The 1976 Bicentennial celebrations prompted some grand visions for Philadelphia. Planning director Edmund Bacon envisioned a world's fair modeled on the highly successful 1876 Centennial, the first major world's fair in the United States. The fair was to be held on the same exhibition grounds as the 1876 fair with a system of boats and aerial trams along and across the river linking it to the central parts of the city. 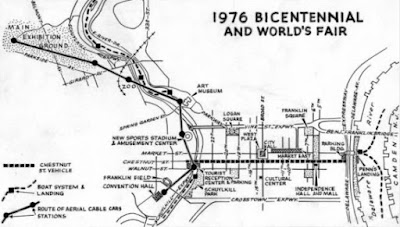 Utlimately this and other grand plans were sunk by the politics of the time. The bicentennial events did bring millions of tourists to the city but the numbers were well short of expectations, as were the long term benefits to the city.
Posted by Dug at 8:45 AM 0 comments

Labels: philadelphia , where I am right now