In northeastern Mali, Tuareg and Islamist rebel groups have declared a new country of Azawad. There have been several previous rebellions by ethnic Tuaregs in Mali, but in this case they have been able to take advantage of the instability resulting from a recent coup in the country. The Wise Men Center for Strategic Studies has a very detailed article that includes the maps below. 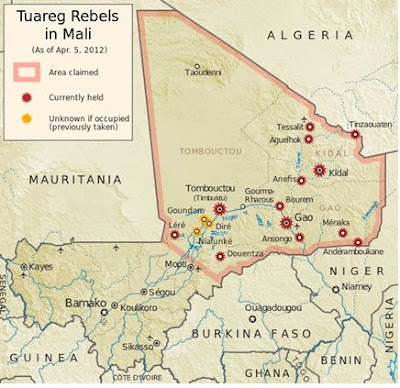 The area in pink is Azawad. It covers more than half the area of Mali. The important cities of the region Kidal, Gao and Timbuktu are all under rebel control. Conflicts between the secular Tuareg National Movement for the Liberation of Azawad (MNLA) and Islamist groups that aspire to install Sharia Law will make it difficult to hold the region together. Malians generally practice a tolerant Sufi-leaning version of Islam and the recent destruction of a UNESCO World Heritage protected tomb in Timbuktu by an Al-Qaeda linked militant is likely to generate more resistance to these groups in the region.

Complicating the matter is the complex web of relationships with neighboring countries spelled out in detail in the article above. Niger in particular is wary as they also have a widespread population of Tuaregs with a similar history of government oppression. The map below shows Tuareg areas in purple. 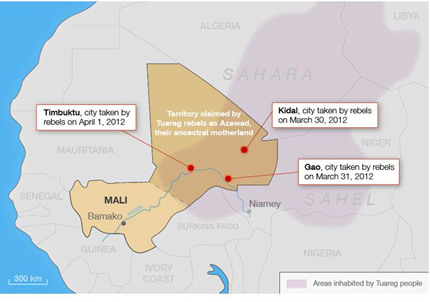 The new state has been condemned by most international organizations and will have little support without a public referendum. However, the longer Mali remains unstable the more legitimate these claims to independence will become.

This article is over three years old but I just discovered it. Four self described nerds from Eau Claire, Wisconsin created this gigantic risk board from a beer pong table. 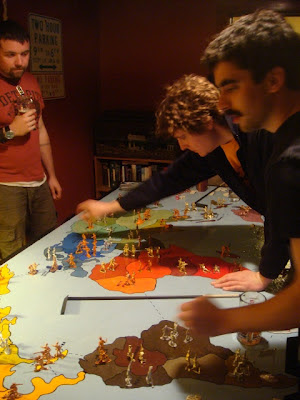 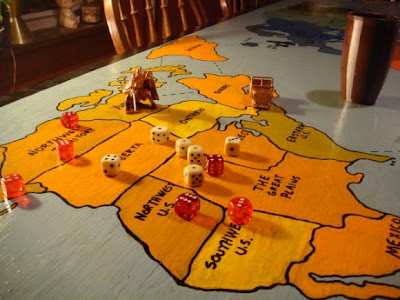 Some of the countries have been altered, which is OK by me because I never did understand that weird line across the United States. Here is the original board image courtesy of the Elliott Avedon Virtual Museum of Games. 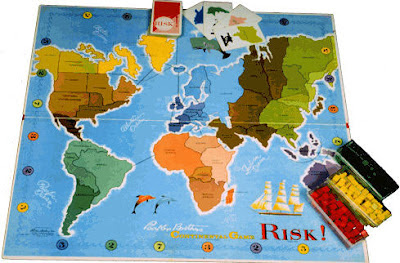 I've never won a Risk game but one time I was way ahead and coming in for the kill. I was staging a massive invasion of Yakutsk or one of those places when a huge thunderstorm came through and knocked out the power-and the game. That's probably why I'm a bitter person now.

Mind the Map: Inspiring art, design and cartography opens this Friday, May 18th at the London Transport Museum. 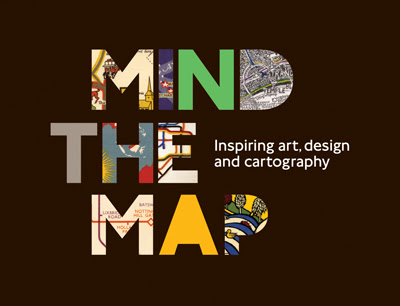 The displays will explore geographical, diagrammatic and decorative transport maps, as well as the influence of the iconic London Tube map on cartography, art and the public imagination. The Underground, London Transport, and its successor Transport for London, have produced outstanding maps for over 100 years. These have not only shaped the city, they have inspired the world.

Looking in particular at the relationship between identity and place, Mind the Map will explore the impact maps have had on our understanding of London and how they influence the way we navigate and engage with our surroundings. Mind the Map will be accompanied by an extensive public events programme and a book to be published by Lund Humphries - London Underground Maps: Inspiring Art, Design and Cartography.

The exhibition opens with a Friday night reception and runs until October 28th. Come for the Olympics, stay for the maps! So far there is no online page for the exhibit so images are hard to come by but here is one from the Museum's site. 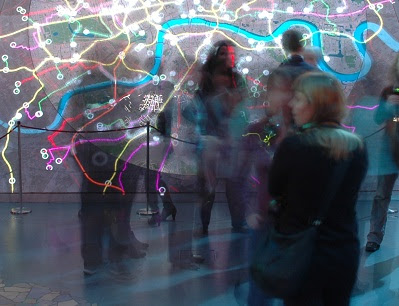 Also, Jeremy Wood of GPS Drawing will be presenting London Overland, a narrative of traveling in London based on over 100 hours of collecting GPS tracks. Click the image for details.

Where Your Money Really Goes

Boston Globe columnist Brian McGrory began a series of columns about the insurance industry recently, beginning with Soaring greed at Liberty Mutual. The column described the mutual (owned by policy holders like you and me) company's air force, based out of Hanscom Field in Bedford. Mass. He used the Wall Street Journal's Jet Tracker to show the important places these corporate jets are taking their executives. 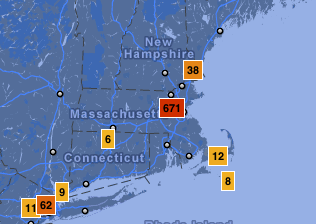 Former chief executive Ted Kelly, when not whining about the "excess" salaries and "very rich" benefits that public employees like myself get, has no problem taking the public's money and flying to his vacation house on Cape Cod - a very short drive from the Boston area. One of the most popular flight destinations is Vero Beach, Florida, near another one of his properties. All of those trips took place in the cold weather months. There were also several trips to commercially important places like Bermuda and Hawaii. Apparently his $50 million annual salary was inadequate to pay his own way.

The Wall Street Journal made Freedom of Information Act requests to the FAA to compile this flight information and display it on an interactive map. You can find a company that you are a shareholder of or that you pay bills to and see where your money goes. The table view lists the dates and times of flights and the map view is what you see above.

My previous mortgage holder, Citigroup also appears to have a bit of a taste for spending your money on vacations with 14 trips to Nantucket, 4 to the Bahamas, 21 to Saranac Lake in the Adirondacks, and one to Marco Island, Florida. My current mortgage holder, Wells Fargo is harder to track because there are so many different entries for them. 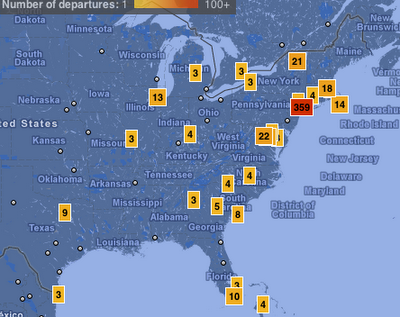 Have fun seeing where your money goes while I enjoy my fabulous salary and benefits.
Posted by Dug at 12:01 PM 2 comments

Canadians Are Not Themselves Today

Partners for Mental Health, a Canadian charity has introduced the Not Myself Today campaign. They want to get Canadians to sign a pledge of support for mental health and encourage them to talk openly about it. Part of the campaign is a crowd sourced mood map.

Each town or city is color coded by the the most predominant mood. When I first grabbed this screen shot Montreal was a nice calm blue though a large percentage of the respondents were also anxious or confused. Today the mood seems to have soured a bit, perhaps because of the gloomy weather? Montreal is anxious, Laval is irritated, St. Jean Sur Richelieu is confused, Mirabel is completely depressed while St. Jerome is sad, depressed and empty. On the bright side Pointe Claire is okay and Chateauguay is hopeful.

White means happy. Unfortunately there's not a lot of white but Pembroke's doing OK and Woodlawn is mostly happy though a bit stressed.

I assume the circle size represents the number of responses but they don't actually say that. It would be interesting to see if the moods correlate with weather but today is not a good day for that as it seems the entire country is cloudy. Hopefully this mapping project will help people feel better about themselves. Try to have a Selkirk, Manitoba kind of day! 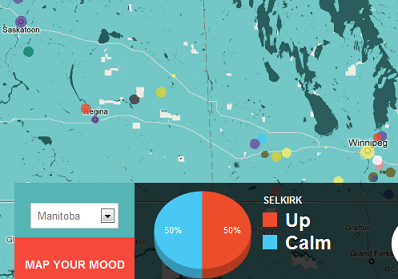