The November issue of National Geographic's cover story is about the happiest places in the world. There is a two page spread showing happiness measures for all countries where data is available.

The map* uses a type of Chernoff face to show three variables; size reflects overall satisfaction with life, the degree of smiling shows people's daily happiness and the color represents health. Some patterns that emerge are that countries in North America and northern Europe have a high degree of happiness but only moderate health. Many countries in Central and South America have better health scores but slightly lower overall satisfaction with life (the faces are a bit smaller.) Eastern Europe and central Asia and much of Africa (but not all) score poorly in all categories.

*this is more of a cartogram-like chart than a map and the not all countries fit into their ideal locations so some are hard to find.

Clearly much is this is subjective on many levels and subject to debate. What I find more dubious is their assessment of urban areas within the United States. Here's a detail from the map of the most happy metropolitan areas. 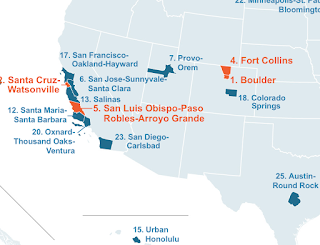 These places are mostly either college towns or places that are unaffordable to anyone of a modest income (or both)-this creates a sense of exclusivity and males me wonder if these surveys show an accurate cross section of the population.

The magazine also has some interactive graphics showing the metropolitan areas-here is a screen shot from a chart of happiness. Although most of the highest ranked places are expensive, there are exceptions such as Des Moines. 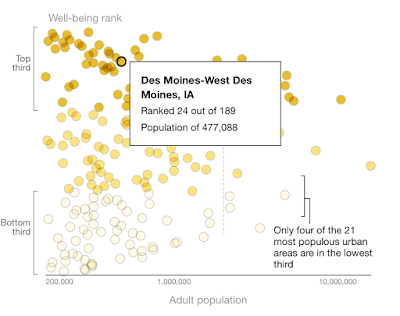 There is also a Chernoff face treatment for the 50 states, though this one only measures one variable-the well being score. 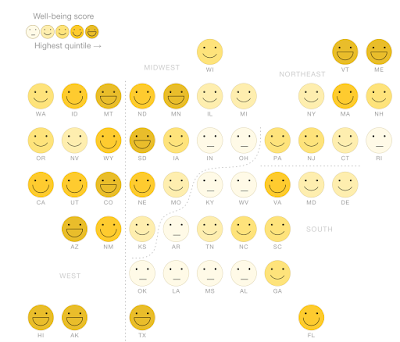 Where the Animals Go 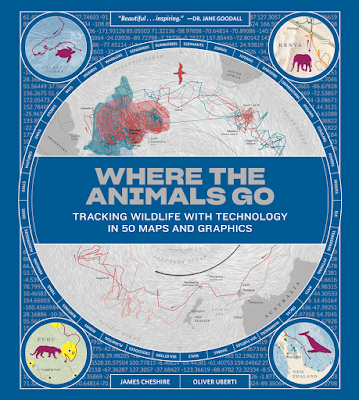 Where the Animals Go is a new book by cartographer James Cheshire and graphic artist Oliver Uberti. It highlights the use of technology to track animal behavior illustrated with some beautiful maps and charts. A quote from the book's website gives a nice look into it contents.

This is a detail from a map showing the tracks of Elephant Seals equipped with temperature and salinity sensors. They dive deep down into the water, making them great candidates for getting these measurements at various ocean depths. 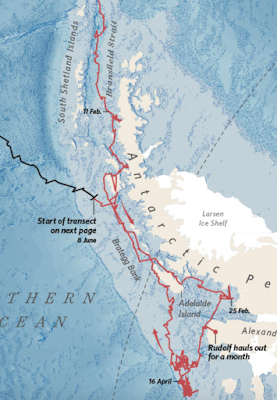 Here are GPS tracks from 25 baboons near the Mpala Research Center in Kenya. The "sleeping tree" was used when there was a leopard on the prowl. 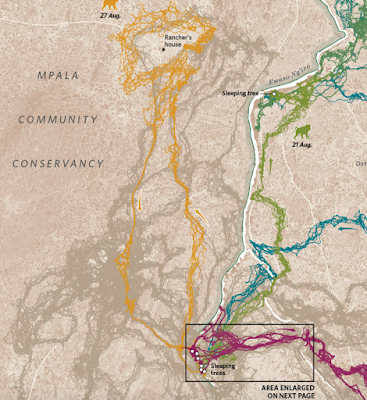 This one details how warblers fled areas of the southeastern United States in advance of a series of tornadoes. They fled a couple of days ahead of time, meaning that they were able to detect the storms well before our normal weather sensors could. 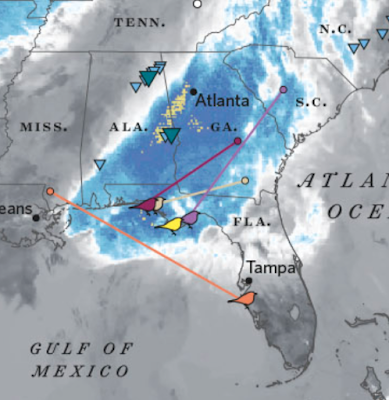 For more information, including where to buy the book, see the book's web page.

This atlas shows the development of Washington D.C.'s water system. 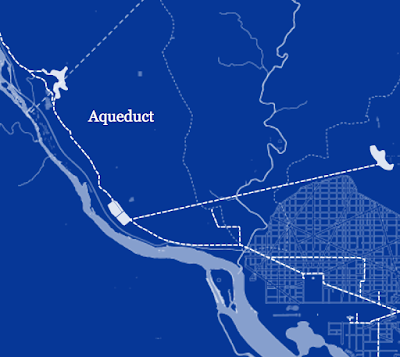 Here is a quote from the atlas page on Dumbarton Oaks, the project's host institution.


As in so many other cities, water is everywhere in Washington, D.C.—and yet it remains largely invisible to most of us, taken for granted or ignored. But D.C.’s waterways and plumbing shape the civic, social, and even commercial lives of its residents just as much now as in the past: the Anacostia, the Potomac, the C&O Canal, Rock Creek. And the crisis in Flint, Michigan, has shown that the questions of where and how cities find their water have tremendous importance for public health, down to the last pipe.

Unlike many modern web maps, this one is refreshingly free of the usual over-reliance on interactivity. Most of the maps are a simple click or two away. The menu at the top shows the options. 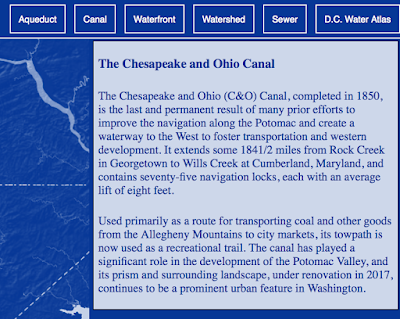 You can also hover over different areas on the main map to get these options.

After choosing an option, there are sub-maps that can be chosen such as this one for the City Canal. 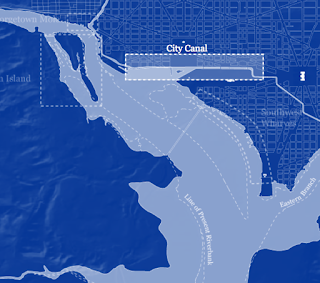 These sub-maps are simple (not interactive) maps with an information panel in the upper left and the year depicted shown at the bottom. The author, John Dean Davis, scanned a series of historical maps and overlaid them onto the modern city. He included some nice details such as the campus of Dumbarton Oaks. 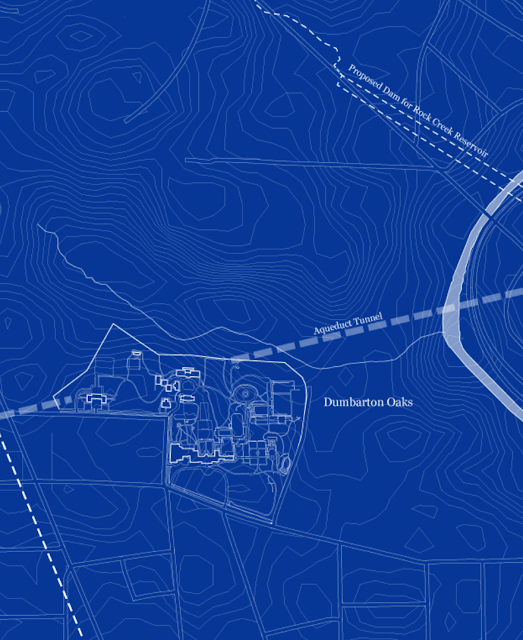 I'm not sure I would have chosen the blueprint color scheme for these maps. Some of the information is a hard to read but it does make for a nice effect and ties the maps together visually.

To explore this further go to the online atlas.
Posted by Dug at 6:52 AM 0 comments 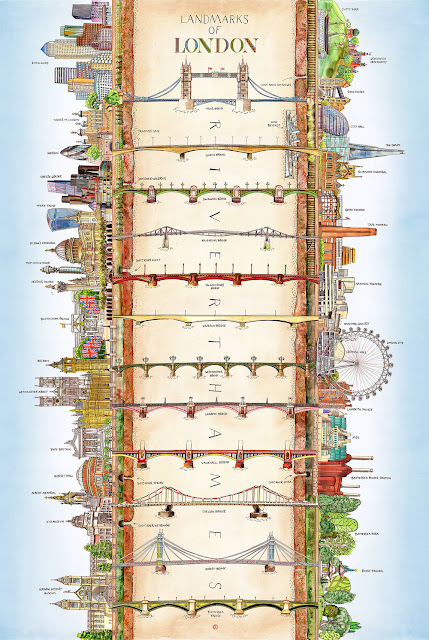 The Thames River runs as if it were a straight line through the middle and occupying much of the drawing. The main details are the bridges. They are turned sideways so you see the details as you would approaching from a boat. This creates a strange disorienting effect if you look closely, especially when looking at the waves around the bridge supports and the connections to the riverbanks. The landmarks seem to be an aside-literally. They are also turned sideways so they pop out from the river in each direction. Here is a detailed section. 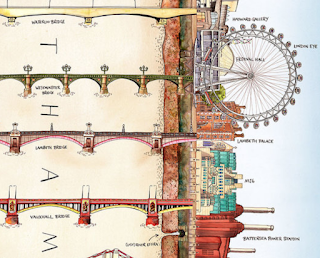 This work does not appear to be for sale yet and there are not any higher resolution versions on his page. However Ollie O'Brien has some nice higher resolution details on the Mapping London blog, as well as a more detailed write up. This one is turned sideways and shows some of the newer, goofily named buildings. 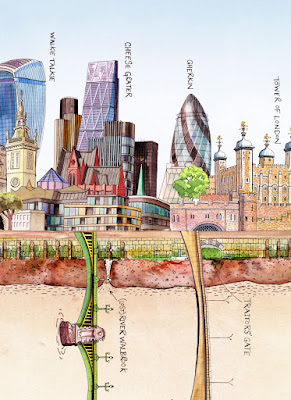