Map of the Week-What's in a Surname?

The latest issue of National Geographic includes this interesting map showing the most common last names (according to phone directories) by state. 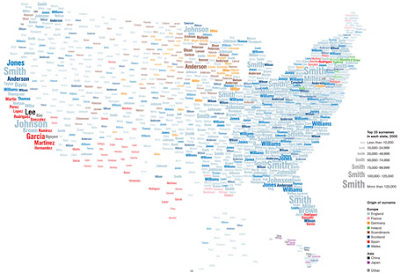 The map is color coded by origin of surname with the most common blues indicating the United Kingdom (England, Scotland and Wales.) By clicking the map above you can zoom to a more readable level of detail. Here is the north to northeast part of the country. 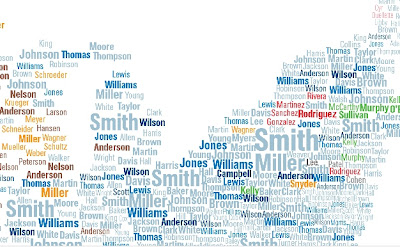 Way up in Maine there are some French (via Canada) names. New England has some Irish names, New York and New Jersey have Spanish and a touch of German in Pennsylvania. Out in the Upper Midwest the brown Scandinavian and orange Germanic names are much more common.

Now for a short critique: By only using the most common names, a level of diversity is missed. For example, Asian names appear almost exclusively in California and Hawaii. The lack of state boundaries makes some distinctions difficult although the map looks cleaner without them. The by state format also has the effect of pushing the New York metro area Hispanic names out into the central part of the state where they are probably less common. Finally, a cartogram would have been more appropriate for this presentation, especially given the need to fit an equal number of names into each state. This format required most of New England to be considered as one state. A cartogram would have helped solve that and some of the other problems.

Karen Bessette is an artist based in Manchester, New Hampshire who often incorporates maps into her collage works. I saw her at the Rhode Island School of Design Alumni Sale and bought this print titled "Antarctica I" from her Antarctica series. I don't a good place to hang it yet so I'll just put it on this page.

The Martin Luther King, Jr., National Historic Site in Atlanta consists of several buildings, including the house he was born, the Ebenezer Baptist Church where he was a pastor, his tomb and the King Center. Here is a detail from the National Parks Service map that can be found on this page:

In addition to the nice Sudan maps (previous post), BBC also has an excellent map of Brisbane, Australia showing the extent of the floods and major points of interest. Note that the yellow area is flooded area at the predicted water height and the flood appears to have peaked at slightly below that level. 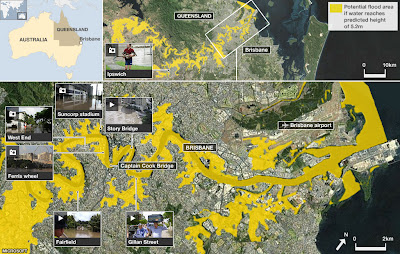 Map of the Week - The Sudan Referendum

This week the southern part of Sudan is voting on whether to secede from the north after two decades of civil war. Like many other formerly colonized nations, the boundaries imposed by outsiders have little to do with physical or cultural geography. This BBC article includes a series of maps that do a good job of illustrating the north/south divide in Sudan.
Geographically, the country is divided between desert in the north and vegetation in the south as seen from this NASA image. The white line is the proposed boundary. 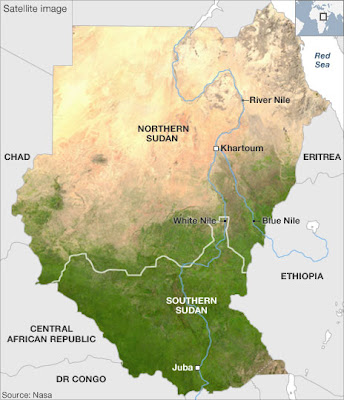 The ethnic and religious divides are also pretty apparent.

Comparing education, infant mortality, water and sanitation shows that north is doing much better than the south. On the maps below showing education levels (green) and sanitation and fresh water (blue), the darker areas are more advanced.

Of course oil is a big issue, with many of the oil fields being in the border region and the pipelines carrying the oil to the north for transport. The oil producing border area of Abyei, shaded below, is expected to hold a separate referendum in whether to join the south or not.

More maps and descriptions be be found on the BBC site. For an even more detailed map of Sudan's oil resources see this previous Map of the Week.

Results of the secession referendum are expected in February and it is likely to pass, On July 9th 2011 there may be a new nation and we will all need new maps. Maybe I'll get a new country flag on my sidebar.
Posted by Dug at 12:51 PM 1 comments

Map of the Weekend-The Canada Puzzle

It's puzzling how clear some things are to me - like the colors of our states and provinces. On a recent weekend cleaning binge I found the jigsaw puzzle that helped me learn Canadian geography and also taught me what color each province is. If you see a map with different colors from these, it's inaccurate! 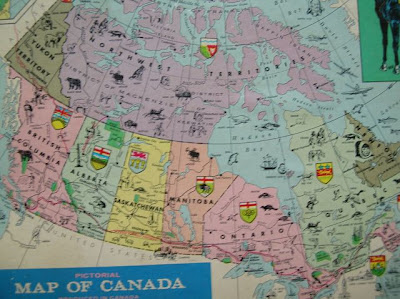 Saskatchewan is as yellow as the wheat that waves in a summer wind and and don't try to tell me Ontario is orange - nyet! Here are some pieces, poorly photographed. 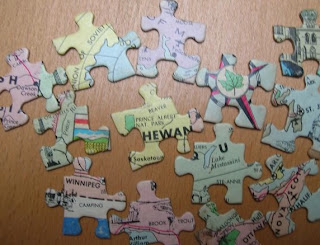 "Paradise in Panorama" is a giant relief map of California built in the early 1920's by a team of sculptors, engineers and geographers. Scientific American called it the largest map in the world when it was unveiled in 1924. The map is made of plaster, wire, paint, and "bits of rock and sand", is "as long as two football fields" and weighs about 70 tons. It showed California before the age of freeways, suburbs and major bridges. 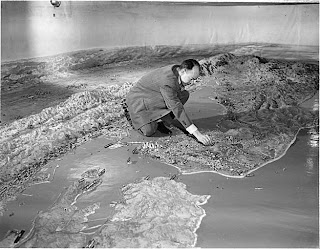 A somewhat mysterious article appeared in the San Francisco Chronicle in October saying that the map has "turned up at an undisclosed location on the city's waterfront" without describing how or why. The article details a bit of its history. The map was on display for many years at the San Francisco Ferry Building, the country's busiest transit terminal at the time, before being damaged in that building's renovation project in the 1950's. It was then cut into sections and put in storage. The city offered the map for $1 for anyone willing to restore and display it but found no takers because of the map's size and the expense of moving it. Various schemes have been devised to redisplay the map but it remains in storage with an uncertain future.
Posted by Dug at 6:26 AM 2 comments