Got illegals in your neighborhood prison? Wondering what happened to the dishwashers in your local restaurant? Want to visit them so you can tell them they're not worthy of cleaning your bathrooms? Here's where to go. In the words of Detention Watch:
"Welcome to the world of immigration detention, where over 27,000 immigrants are detained on any given day in almost 200 prison-like facilities across the country."

The Geo-Heat Center at Oregon Institute of Technology has a map of geothermal projects across the USA. You can click on any state and get a map like the one below. Unless you pick a state with no projects in which case they send you to New York(?). Clicking any of the symbols will take you to a page listing the details of that project.

This past weekend I did lots of traveling in circles around the Northeast using all kinds of transportation modes. During one of the long rides I decided to see what it would look like to map out my travels so here's what I came up with. Well, it's sort of vaguely interesting anyway. Note that the walking distances are slightly exaggerated (but not by much) - otherwise they'd be invisible at this scale. 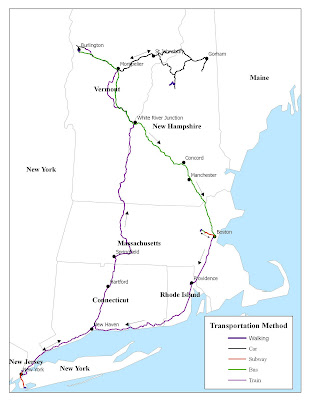 Labels: my personal details , my self indulgent whims , new england

Snobs like me who order loose tea from catalogs get newsletters like the Upton Tea Quarterly. They have articles about the history of tea. This history mirrors the history of empires controlling trade. The current issue has this map on the cover showing the eastern Portuguese Empire. 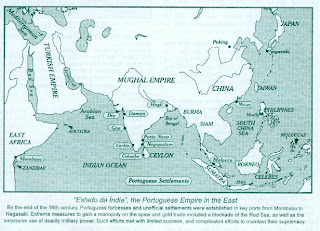 Some quotes from the article:

Vasco da Gama set the tone of "hatred and vengeance which would characterize Portuguese-Muslim relations for the future. By 1504 the Pope received a threat that Christian holy places would be destroyed unless something was done to curb the Portuguese".

The empire started modestly with the claiming of unoccupied islands such as Madiera and Porto Santo. Prince Henry "The Navigator" claimed to have liberated these places from Muslim rule.
Posted by Dug at 11:11 AM