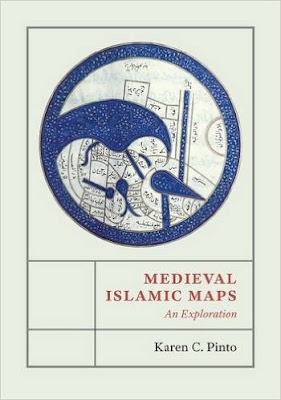 These maps are more representational than geographic, following the early Christian T-O maps. In an interview, Pinto describes the typical world map as having the form of a bird. The map on the cover puts south at the top. The white land areas are the bird's features: Africa is the upper wing, the Arabian Peninsula is the head, Asia is the body and Europe (the tiny triangle in the lower left) is the tail. Here is another version by Al Istahkri from cartographic-images.net circa 977 AD. 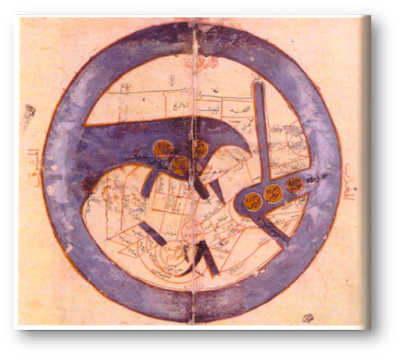 The large water body on the left side is the Persian Gulf and Indian Ocean. The teardrop shaped water on the right side is the Mediterranean Sea. The Nile is shown sticking up from there while below the Mediterranean is the Bosporus Strait. Rivers coming down from the Sea on the left are the Tigris and Indus. Both seas are shown containing three large islands, it is not always agreed which ones they are. Other important water bodies in the lower half of the image are the Caspian and Aral Seas. Another image from cartographic-images.net  helps translate the place names. 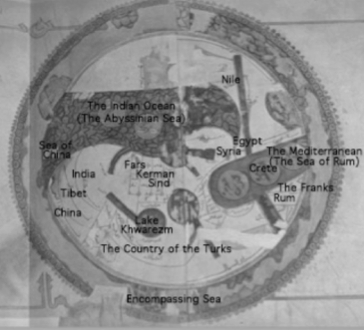 There is no scale on these maps but Al Istahkri lists distances between places in marhalah (a day's journey.) A journey through the inhabitable world was 210 days. The far north and south were considered uninhabitable because extreme cold and heat respectively. The southern hemisphere was unknown to these travelers.

Pinto discusses how scholars have often belittled these maps for their simplicity while ignoring that they are iconographic representations, meant to promote a common world perception. The simple forms also made them easy for traveling scholars to reproduce and bring back to their home libraries.

Cracks in the Antarctic Ice

We all know global warming is a hoax because of fossil fuel industry funded science. However, if it was real one thing we might see are growing cracks in the Antarctic ice shelves. One such crack is forcing the British Antarctic Survey to move their research station inland. The survey's site has a nice map showing the extent of the crack and the new site. 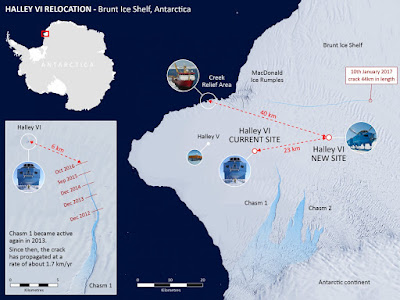 The station was designed in modular units so they can be towed across the ice. The work is proceeding now in advance of the upcoming Antarctic winter.  You can click the image above for more detail but here is a zoomed in view of the chasm that threatens the current location. This crack in the ice was dormant until a few years ago. 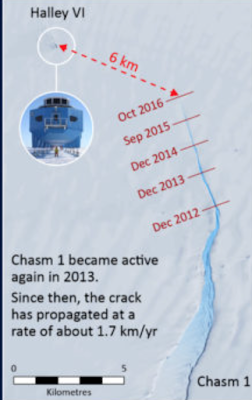 A second crack 17 km north of the station recently appeared. These cracks could cause a large iceberg to calve. The station is being moved 23 km inland which should put it out of the danger zone for a while. For more info see the British Antarctic Survey's web site.

Location: Antarctica
Email ThisBlogThis!Share to TwitterShare to FacebookShare to Pinterest

John G. Drury (1907-1988) created a series of "Mem-O-Maps" for World War II soldiers. To kill time on the ship returning from the Pacific he used his experience with Army charts to draw maps of Japan with scenes known to GI's. The map featured bright colors, amusing images and optimistically removed all sense of devastation. 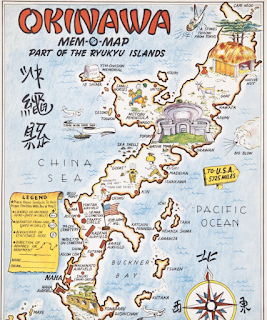 Fellow soldiers asked for their own copies. By the time they landed ashore he had sold 232 copies* of these maps and came home with an idea to turn this into a business. The legend had blank spaces with instructions on how a soldier could customize the map with their own details. 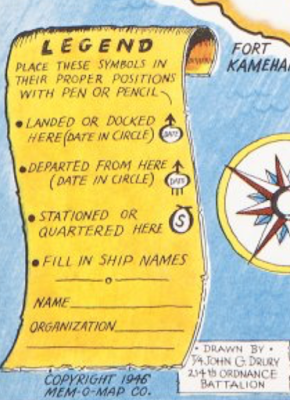 He created maps for Japan, Korea, the Philippines, Hawaii and Europe. Some details from the Europe map include someone pissing on Germany, 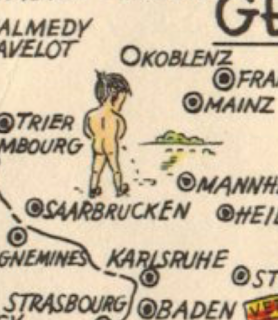 and this detail of Paris showing a naked woman symbolizing the La Roulotte night club along with a pig next to an alley referencing the Pigalle neighborhood where the club was located. 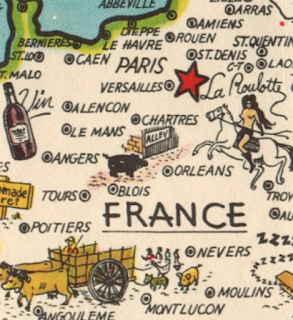 *These images and information are all from Barron Maps. For more maps and much more detail about Drury and his company see their blog.

Oh the Places You Should Know

Oh the Places You Should Know is an Sḵwx̱wú7mesh (Squamish) language place name map of southwestern British Columbia.The non-profit Kwi Awt Stelmexw created it as a means to reclaim Squamish language and cultural identity. The map is for education and advocacy, and not intended to make any claims on the land. 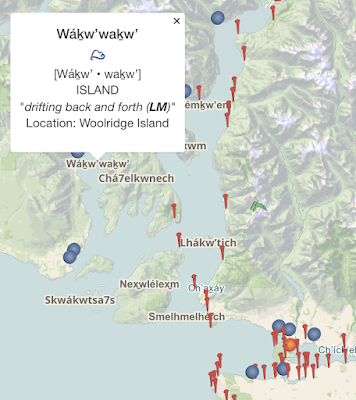 The map has clickable icons, listing the Sḵwx̱wú7mesh name, pronunciation, meaning and a description of the location. The main region covers the Howe Sound and the Vancouver area's Burrard Inlet and English Bay coasts. Early transportation was primarily by canoe so most place names were given to landmarks and locations visible from the water. 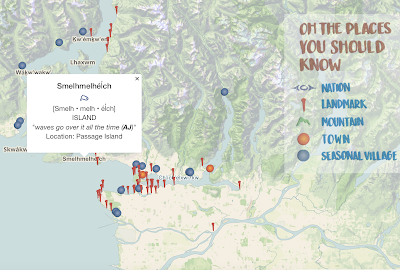 The region includes downtown Vancouver. The beach at the foot of Denman St was "good under foot." I was there once and I do remember it being good under my feet. 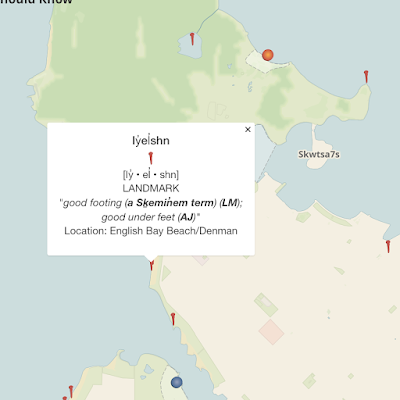 Many of the names were collected from a 1937 Sḵwx̱wú7mesh place names map developed by the City of Vancouver and August Jack Khatsalano of the Squamish Nation. An update of the map is available for purchase here.