The Olympic Stadium is a Map!

For the opening ceremonies of the London Olympics, the stadium has been turned into a large map of London. 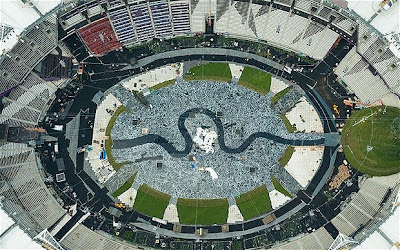 This photo was taken from the "wrong" direction so you're looking at London with the south side at the top (photo courtesy of the Telegraph.)

Here is a close up, from the Swide newsletter. 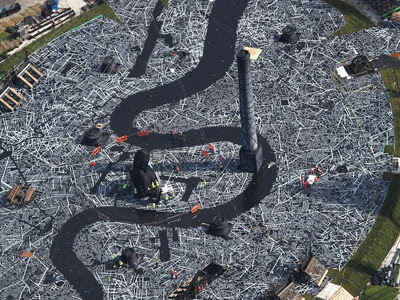 Map Your Way Through the London Olympics

The 2012 Olympics are here! Here is your map guide:

First - a simple map from the official London Olympics page showing the lay of the land. 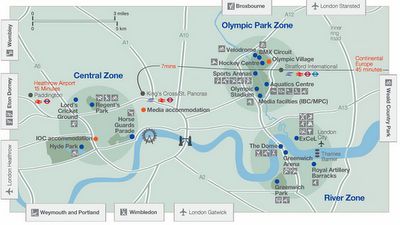 A click on the image below will take you to an interactive map with venue information. 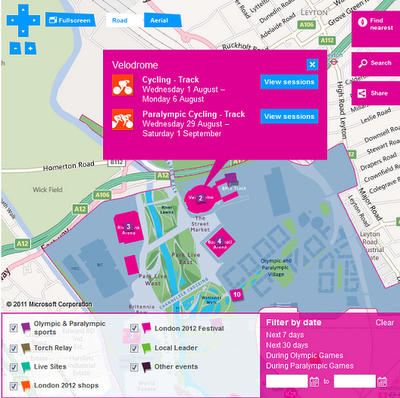 Get Ahead of The Games has a cool map with a slider bar - you choose the date and the map shows the predicted impact on the underground. Here it is for August 3rd. The larger red circles are the busiest stations. There's an animation for the entire Olympic and Paralympic Games time frame. 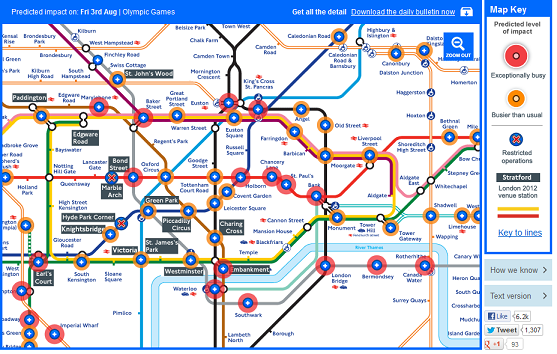 If you choose to drive, the Olympic Traffic site has the route network map; 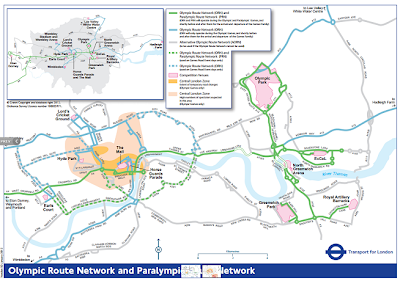 and traffic heat maps - also available as an animation from Get Ahead of The Games. 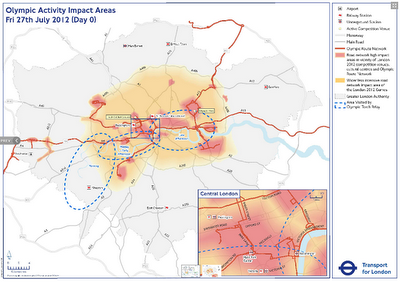 Finally,  here's what the new venues look like on your TomTom GPS screen - courtesy of Pocketlint. 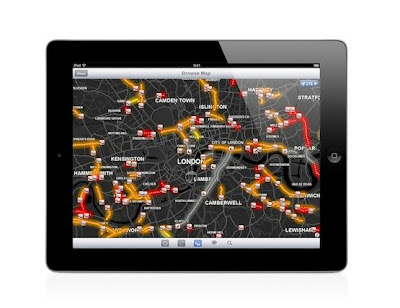 The 1940 U.S. Census records were recently released by the National Archives. With a little work you can find any street (that existed in 1940) and see the census forms. They tell you the names, ages, occupations, salaries and state or country of birth for all residents. I was able to locate my mother and her family in South Philly. My father grew up in the Bronx and though I couldn't find him (his parents briefly lived in New Rochelle, NY), I was able to track down other members of the family at the apartment we used to visit in my youth.
The Center for Urban Research at the City University of New York (CUNY) has placed a 1943 market analysis of New York City online to give context to these census records. The page, Welcome to 1940's New York, has interactive maps and profiles for each neighborhood in the city. 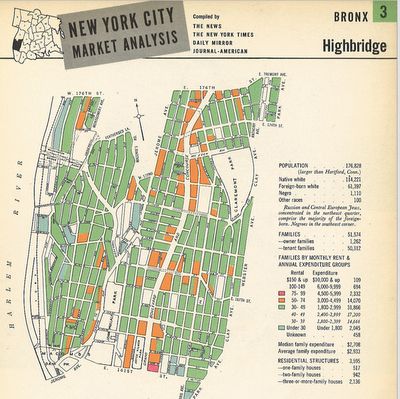 Above is Highbridge, my father's neighborhood in the Bronx. The colors give an indication of wealth (based on rent and other expenditures) with the blues and greens at the low end and the oranges and reds at the high end. My dad's block is green, at the lower end of the spectrum.

The descriptions are also worth a read. "Highbridge is a heavily populated and good residential district." The "new and better buildings" are along the Grand Concourse, and the retail outlets "while small, are of a good class...." It makes me wonder how they would describe the African Movies Mall.

In the case of neighborhoods with a greater diversity of wealth, such as Greenwich Village, they added purple and yellow to the top of the wealth chart. 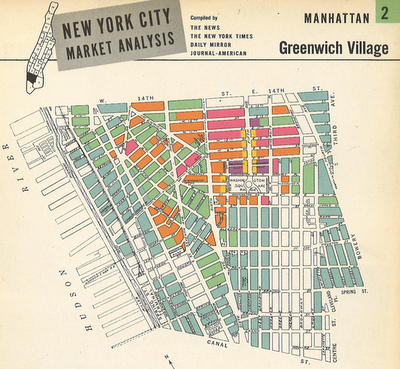 The description of Greenwich Village as "not a neighborhood of artists and writers" where "remodeling has changed many of the bohemian haunts" and it's popularity among "business couples" makes for an interesting early take on gentrification.

The interactive map overlays the demographic profile for every neighborhood, giving an overall impression of the geographic patterns of wealth and poverty, much of that unchanged today. 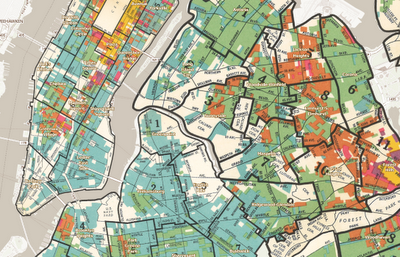 The route of a combine harvesting business. 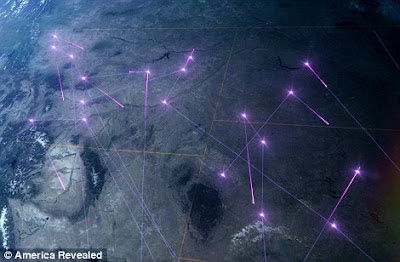 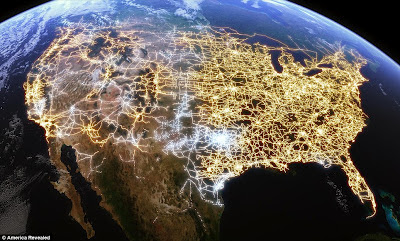 New York's morning rush hour color coded by transportation mode.  Buses (blue) are only shown for Manhattan and cars are not shown. 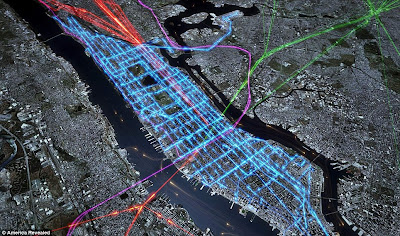 A "visual representation of the nation's wind resource." 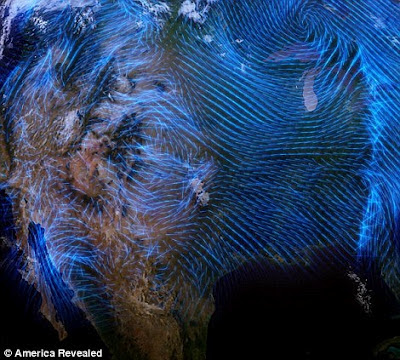 A vast array of communications towers 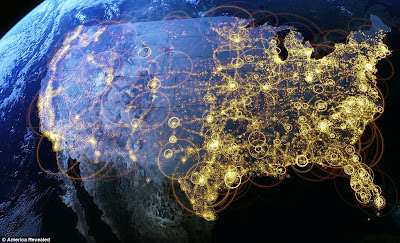 A few years back, I posted some maps for the 4th of July showing how we perceive others and vice versa. Here is a collection of maps about how we Americans see ourselves. 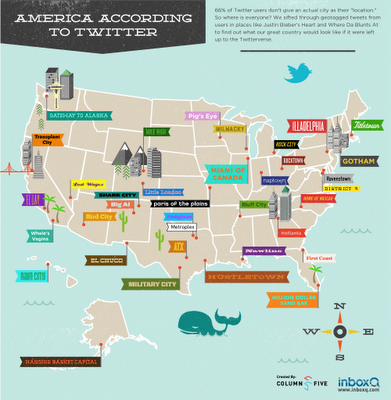 I don't understand some of these, particularly Chicago (Miami of Canada?) and San Diego (yuck?)

Here's the United States of America as Seen by New Yorker, Dan Abramson:

The U. S. Map According to Michiganders, via mLive:

The United States According to the NFL from HeadBlitz:

While we're on sports, here's a complicated one. When the "World" Series was conceived in 1903 the world was clearly a much smaller place. In the author's words it was "obviously named by someone who thought the “world” ended just past the Mason-Dixon Line and the Mississippi River." This one comes from an article posted at Gate 21, an extremely slow loading blog from the University of Tennessee.

Finally, I couldn't resist this nasty one from GraphJam - America According to Europeans. As the comments clearly illustrate, lots of people have no sense of humor. Hope if you're one of those folks, this doesn't ruin your holiday. 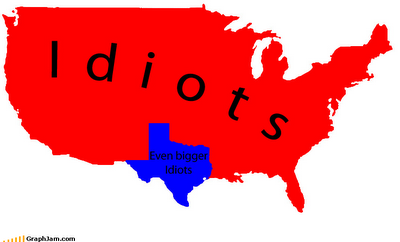