Chart of the Week-Mind the Gap!

Hans Rosling is a professor of global health at Sweden’s Karolinska Institute. He creates animated charts in an attempt to counter myths about the "developing world." Very basic shapes and colors make the patterns clear. Here is an example of his work, a chart showing child mortality vs. income for the countries of the world. The dots are sized by population and colored by region. Note the compass rose too. 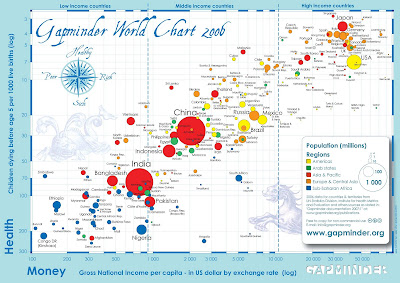 However it gets more interesting to see these charts in action as they appear in his gapminder web site - the name inspired by London's Underground. While the chart above shows much of Asia and Africa lagging behind, the animations show the "developing world" catching up and improving at a quicker rate than much of the West did. Here is are some frames of a 200 year time sequence showing life expectancy vs. income. Click the frames to get the web page. You can also choose countries to highlight and hover over a point to get the country name. 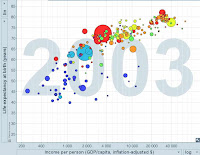 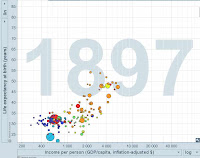 If you have time and a decent internet connection, watch this video. He is entertaining and it may change the way you look at the world.
Posted by Dug at 12:51 PM 0 comments

Today's Weather Forecast-Sunny in the Deserts, Rainy in the Rainforests

I was looking something up on CNN when I came across these weather maps. What's remarkable (or not) is how well they seem to conform to the climate zone patterns of the world. I poorly stitched together the southern hemisphere continents minus Australia (too hard to deal with the scale difference there). I had to rotate Asia for projection issues. Anyway here's a comparison.

World Precipitation from Encarta.
Posted by Dug at 7:23 AM 3 comments

This map was posted on the Strangemaps blog last month and I couldn't resist stealing it. 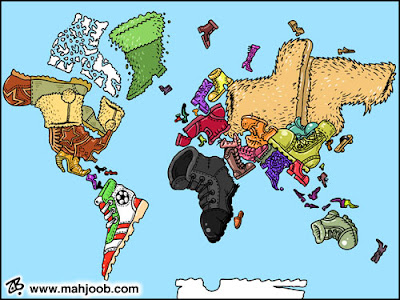 Created by Jordanian political cartoonist Emad Hajjaj, it shows countries and continents as shoes, often in cliched regional styles. Western boots for the USA and Mexico, a pair of mukluks for Canada (with Alaska as a cowboy boot toe), furry boots for Russia and a vaguely Indian looking boot. South America and Africa (except Madagascar) only get one boot per continent with South America being represented as a soccer shoe - cause you know, they're soccer crazy!
There are lots of clever things with the shapes. The soccer shoe really is shaped like South America, Baja California is a high heel, the islands of northern Canada together form a boot and if you look carefully the Caspian Sea is shaped like a boot while the Black Sea is a shoe. And of course Italy is shaped like a boot.
If there's any political meaning behind this it's lost on me. Interestingly his own country is not represented. I could speculate on deeper meanings but I'd rather just appreciate the map.
Posted by Dug at 5:20 PM 0 comments

I tried the Bixi in Montreal! For a summary of my brief experience see the comment on my Bike Fest post.
Posted by Dug at 5:11 PM 1 comments

Here's a story I missed while dedicating an entire month to bicycling:
The Japanese government and some equal rights groups are upset with Google for placing links to these gorgeous 18th and 19th Century woodblock maps of Tokyo (Edo) in Google Earth.* 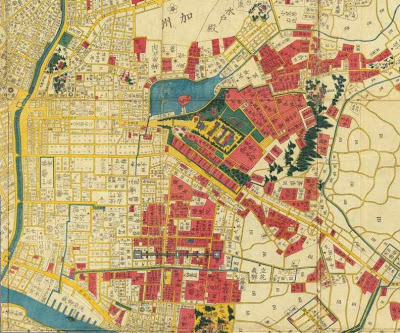 Why? Because they show the locations of Buraku villages. The Burakumin are a minority group who were “outcasts” under old Japanese caste system, dating from the early feudal shogun era. This system identified the Burakumin as “untouchable” due to their employment in death related or "impure" professions such as gravediggers, undertakers, executioners and leather workers. They lived in secluded hamlets or ghettos.
These prejudices survive and some fear that this information will promote discrimination in previously forgotten Buraku areas. Google has responded by having references to Buraku villages removed, however they may be reinstated as "historical documents."
For an excellent summary see this entry from the Geographicus Antique Map Blog. 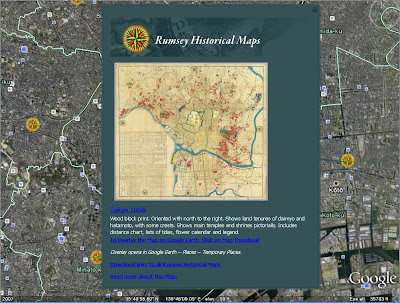 *Google Earth has a feature where you can link to maps from the David Rumsey Map Collection. The Japanese maps are from a collaboration between Rumsey and the East Asian Library at the University of California, Berkeley.
Posted by Dug at 6:38 AM 2 comments