What They Drop on New Year's Eve

I made  a map of objects that are dropped on New Year's Eve. It is based on this Wikipedia page. Click for a more readable version 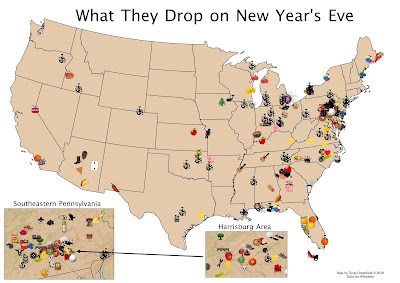 The density of points in Pennsylvania made it necessary for two inset maps - one focused just on the Harrisburg area, the center of dropping things according to Wikipedia. The high density of points in various locations made this an obvious candidate for an interactive map, so I created one - click the image below to see it. You can zoom in and click on an object to see the town or city and what the object is as that is not always clear. Beware - sometimes the interactive map does not load all points on the first try. If only a few appear, refresh the page. 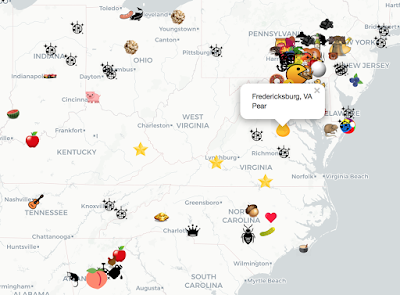 Here is a zoomed in view of Harrisburg. 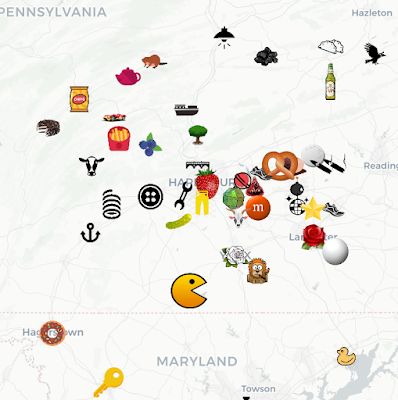 The static map was made mostly using QGIS, the interactive map is via Leaflet using a basemap from CARTO.
Notes about the data on the map
The Wikipedia page that was the source for this map is subject to changes at any time and may have already changed since this map was created. Some of the items listed on that page were either one time events or have been discontinued. These were not included on the map. There are two locations outside of the United States (Bermuda and Canada) that were not included but may be added at a later time. There is an obvious Pennsylvania bias in the results as much of this came from an article in Penn Live - this is also where I first saw some of these and got the idea for the map. See map notes below for how this was handled cartographically.
Mapping Notes
Most points are from canned US cities data sets and are not accurate when zoomed in too far. The locations reference cities or towns and are not meant to represent precise locations of the towns or drop events. In some cases they may be several miles away. The Key West locations were moved slightly so both objects would be readable. There are (at this time, December, 2018) no objects listed in Alaska or Hawaii. This allowed me to zoom the map in and not need the inset maps commonly seen for these states. Instead, I was able to use those spaces for Pennsylvania, which has such dense data that it needed two separate insets, one just focused on Harrisburg. A couple of other areas, particularly northern Georgia are also very dense. The interactive version was created for this problem.
Posted by Dug at 5:39 AM 0 comments

Rabbits were introduced to Australia in 1859 by English settler Thomas Austin. According to Austin "The introduction of a few rabbits could do little harm and might provide a touch of home, in addition to a spot of hunting." The rabbit population quickly exploded and caused major damage to crops and pastureland. Staring in 1901 a 1,139 mile fence was built across western Australia to keep the rabbits from migrating from the east. 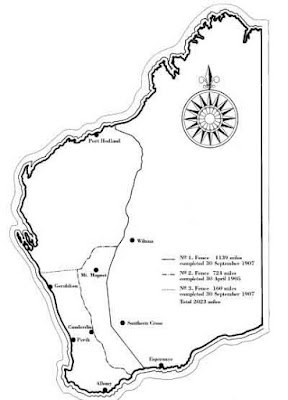 An earlier fence proposal was ridiculed in this cartoon. 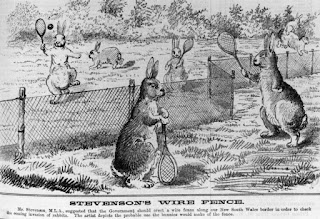 The first fence is the one furthest to the east. It was the largest unbroken fence in the world. Unfortunately rabbits were found west of the original line so a second and then third fence were constructed. By 1907 2,023 miles (3,256 kilometers) of fence were built. This map, via Wikipedia, has each section color coded. 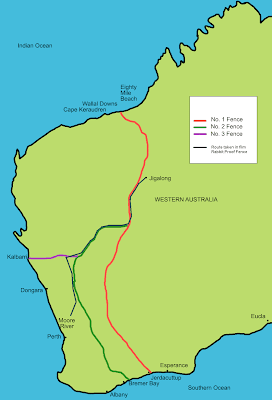 In the 1930's the fence was used as an escape route for three young indigenous girls back home from a settlement camp near Perth where they had been taken by force. Their route is shown in black above and and the story is recounted in the book Follow the Rabbit-Proof Fence.

Today, much of the shortest fence route still stands (as seen on the map below from 2001) as the State Barrier Fence of Western Australia.  It is used to control emus, wild dogs and feral goats and also serves as a fire break and disease barrier for various animals. 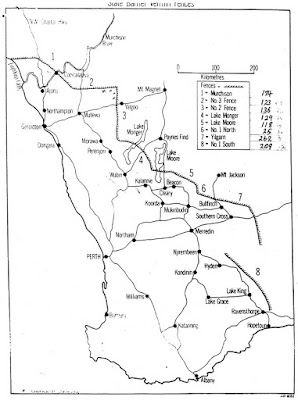 Russia's annexation of Crimea and occupation of eastern Ukraine have been in the news lately with tensions between the countries escalating again. However, Ukraine is also facing agitation on their western border from Hungary. Zakarpattia Oblast, Ukraine's westernmost province has a large ethnically Hungarian population. The map below, via Euromaidan Press,  shows villages that have a Hungarian speaking majority (in orange) on their councils. 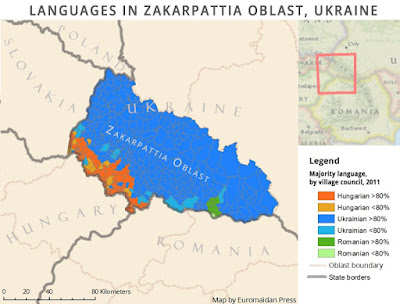 The Hungarian government, while publicly not seeking to control these areas, has been sending development money and encouraging autonomy for these regions. They have also been issuing Hungarian passports to people living in these areas and some residents have been pledging allegiance to Hungary. Russia has also been actively promoting Hungarian claims to the region. In return the Hungarian government is campaigning to lift EU sanctions against Russia for military aggression in eastern Ukraine. For Russia this is also part of a divide and conquer strategy for the region as a whole.

Prior to World War II, Hungary expanded its borders to include minority areas of all of neighboring states and many Hungarian politicians openly dream of reconstructing this "Greater Hungary" 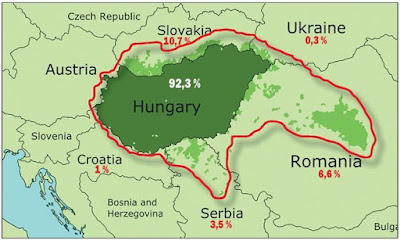 Ukraine has helped this instability by passing a language education law that is unpopular with the Hungarians. This spring Ukrainians will vote in presidential and parliamentary elections with the current government hoping to improve ties with the west while Hungary and Russia are hoping to wield their own influence on the country.