Gulag Online is a virtual museum and interactive set of maps that lets you travel through a labor camp and learn about the daily lives of
Stalin's prisoners. 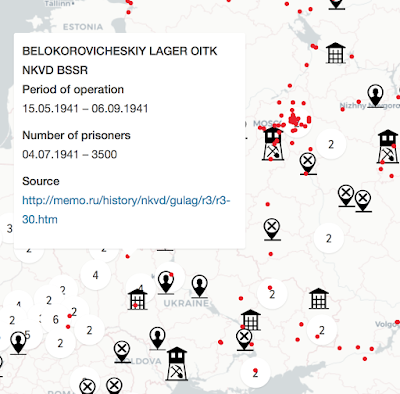 A zoom way out shows the hemispheric reach of the gulag system. 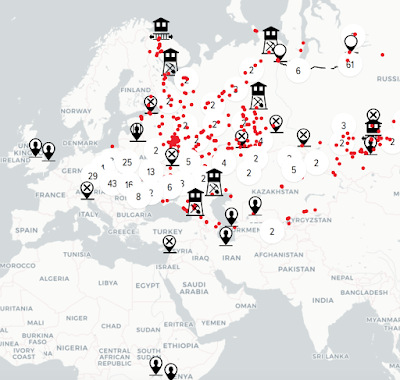 Zoom in on an area for details, 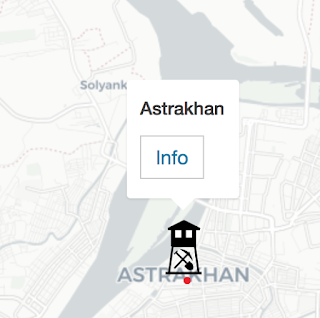 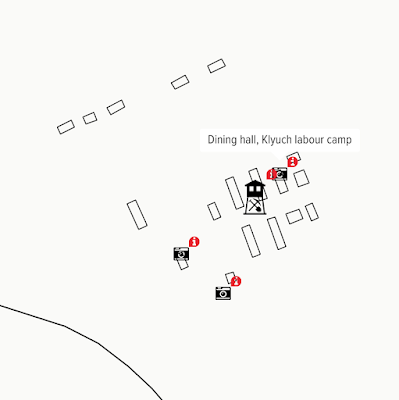 Some of these are from visits, while some can be seen from aerial photography. 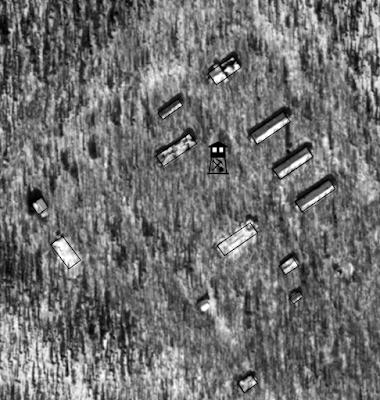 Many of these camps are located along the Dead Road, a trans-polar railway that was to run almost 1,500 kilometers from Salekhard to Igarka (seen below on a military map) 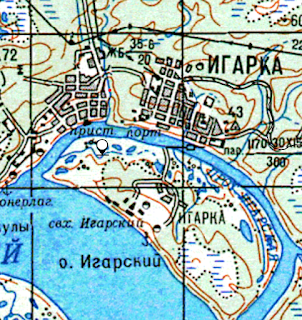 An estimated 100,000 prisoners worked on this railroad between 1947 and 1953. The project was abandoned after Stalin's death. The extreme remoteness of the region has helped preserve many of these camps. Numbers below show dense clusters of camps. 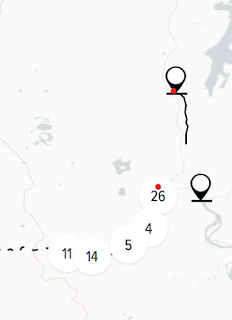 Here is a quote from the site about the Dead Road:

"it was clear to almost everyone in the leadership of the USSR that prisoners’ slave labour in the corrupt Gulag system was wasteful and desperately inefficient. Only Stalin failed to realise this and he was obsessed by similar construction projects. To this day, it is still not completely clear – even to Russian historians – what made him want to link the uninhabited and hostile environment of Siberia’s Polar regions by railway. It was most probably for strategic reasons."

Across the street from my office is a public library, where a copy of this map (circa 1904) hangs. 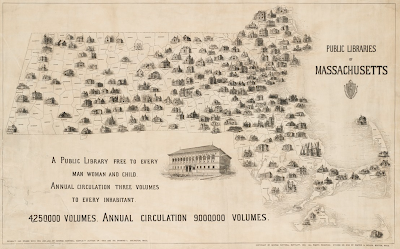 The library is a modern building so it is not on the map, but many of these libraries are still standing and in use today. That includes the Boston Public Library, shown on the bottom of the map, which houses the Norman B. Leventhal Center, which has this map in its digital collections. 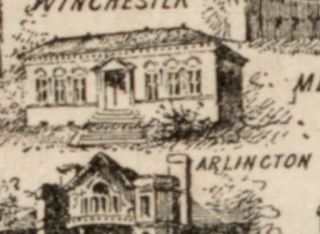 The map beautifully illustrates each library. Above is the library in Arlington, near my house and also near the home of the map's author - "designed and drawn with pen and ink by George Hartnell Bartlett (author of 'Pen and Ink Drawing'). Arlington, Mass." 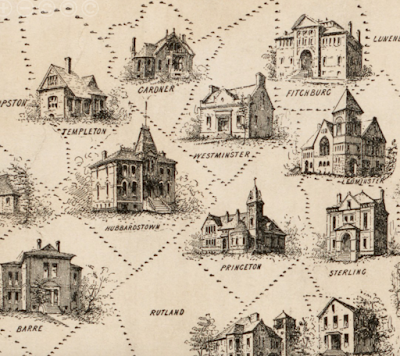 The diversity of architectural styles is fun. Some of them are just mere Cape Cod style houses, 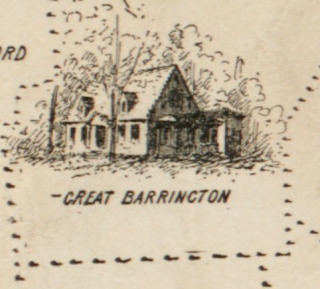 like this one, about as far from the Cape as you can get in the state. Others look like Greek temples or haunted houses. 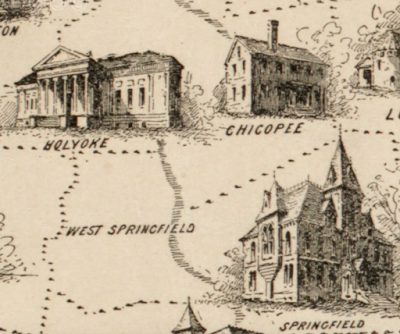 Here's one from a town that no longer exists - it was flooded to create a reservoir so that when you visit the Leventhal Center, you can get a drink from the "bubbler" there. 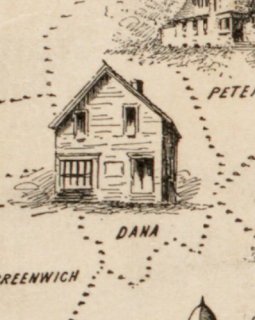 The text at the bottom of the map reads

Beautiful Trash is a pretty visualization of trash truck routes created using Tableau, a good example of creating maps with non-GIS software. A week's worth of GPS tracks from the City of Cincinnati are color coded by collection day. 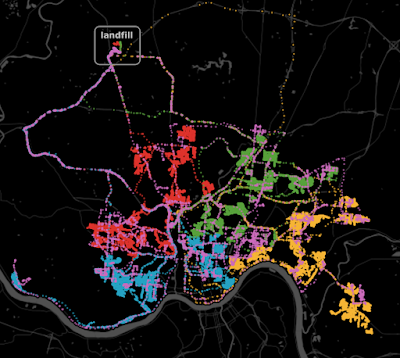 The black background really makes the colors pop. The areas served by each day show up nicely. It appears that Friday is a kind of pick up the missed stuff day and has by far the most mileage. Hover over a route to see the truck number and coordinates. You can choose a day at the top to see in isolation - for example Wednesday. 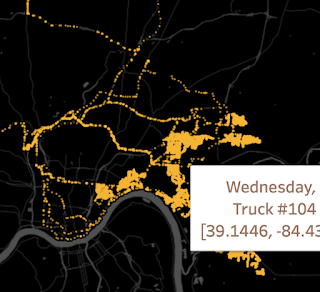 Also when you choose your day a kind of summary route appears at the top which I don't quite understand. 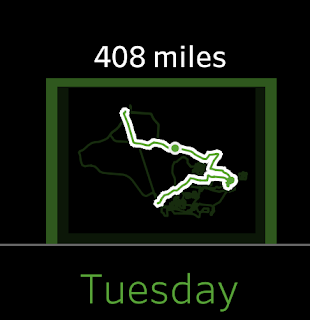 Anyway kudos to Jeffrey Shaffer for turning trash into treasure.

Japan is known for a history of resistance to western contact and influence. As a result their knowledge of the rest of the world was slow to develop. The earliest "world" maps produced in Japan were Buddhist maps (nansenbushu) using a combination of geography and mythology. 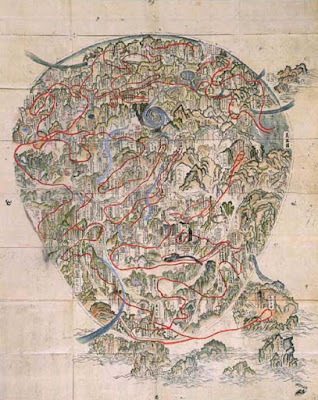 The map above shows only China, Japan and India [source]. These maps were scaled by religious importance, rather than by distance so the geography is almost unrecognizable. India, the center of the Buddhist world takes up most of the map.

The first nansenbushu to show the entire world was a 1710 woodblock print by monk Rokashi Hotan. 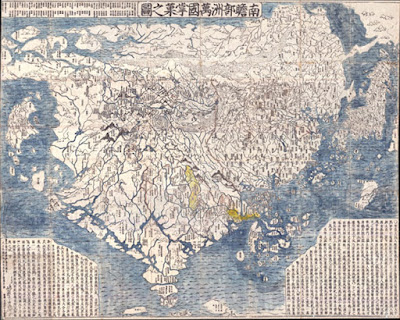 While still dominated by those three countries, this map shows various European countries as islands such as Holland (country of the red hair). Africa (Land of Western Women) and South America are shown as small islands while a piece of North America is connected to Asia by an Aleutian land bridge. By this time many western world maps had filtered into the country but these influences were either missed or were ignored by Hotan. Here is detailed look- the entire map can be browsed here. 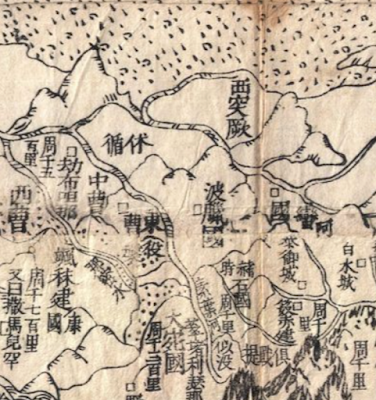 Matteo Ricci was a missionary who learned Chinese and made a map of the world in the Chinese language, readable to some Japanese. This influenced the Bankoku-sozu map, the first western style world map created in Japan. The version below is centered on Japan, oriented with east up and contains pictures of various ethnic groups. 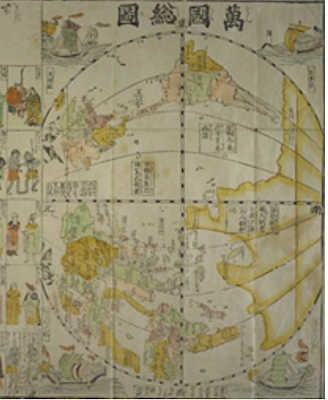 The image above is a screen shot from The Evolution of Japanese Cartography by Olivia McCaffrey. 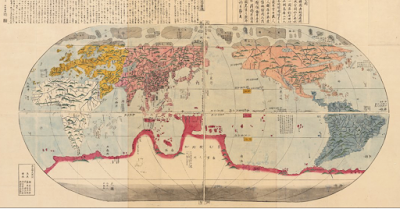 Nagakubo Sekisui, considered the founder of Japanese geography, made the above world map largely based on Ricci's map in 1785. Each continent has its own color while the unexplored Antarctica has a bold red outline. Here's a detail showing Japan (in the center of the world) and Korea. 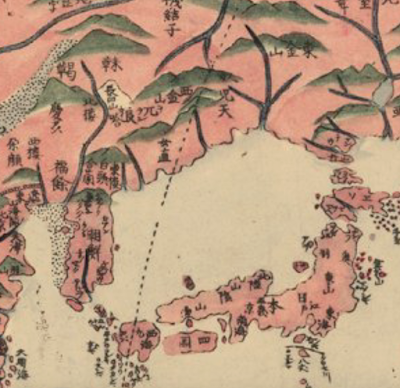 Here is North America. California is shown as a peninsula because this map predates the theory of it being an island. 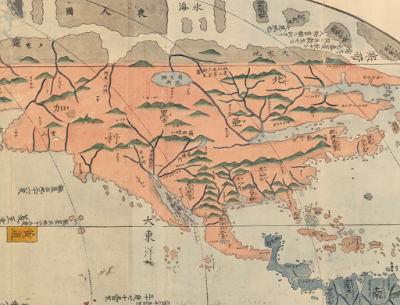 The entire map can be browsed at Barry Lawrence Ruderman Antique Maps, Inc, along with some interesting historical details. For example, Nagakubo's omitted ridiculous, prejudicial notes from the Ricci map about Japan while keeping similar notes about other places such as Brazil. "The inhabitants of this country do not build houses. They dig the earth and live in caverns. They like to eat human flesh, however they only eat men and not women. Their clothes are made from birds feathers."

An 1834 map by Giko Yamazaki drawn as a sphere - via the Ephemera Assemblyman blog - this page contains many other maps from this era. California has now gained its status as an island. 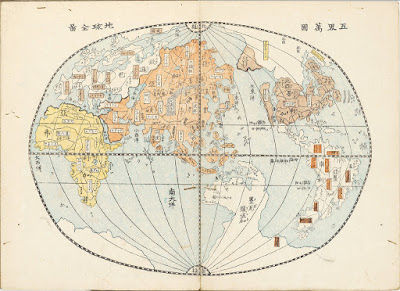 Here is a map by an unknown cartographer via All That is Interesting from 1853, just when Japan was being forced to open itself up to foreign trade. The geography is improving noticeably. 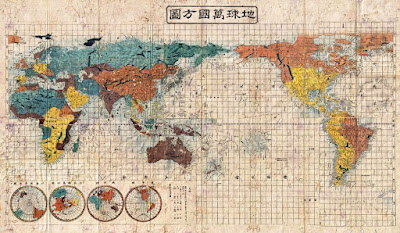 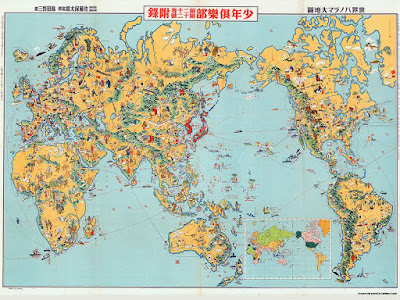 The "cultural vignettes" are mostly benign, if a bit stereotypical, but the map also gives a sense of Japan's imperial  and military ambitions. Some detailed views-via eBay. 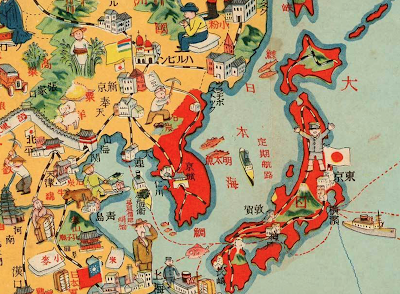 Here is Washington and British Columbia. 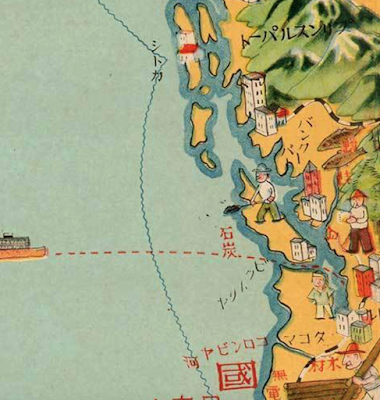