This post is a continuation from last week detailing my recent visit to Chicago's Newberry Library. In the map room was a book of maps of the Oregon Trail. Having gone to graduate school in Lawrence, Kansas near the beginning of the trail, it caught my attention. 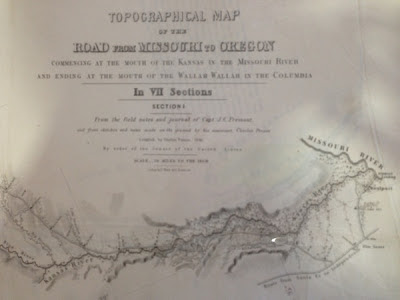 The full title is "Topographical Map of the Road From Missouri to Oregon Commencing at the Mouth of the Kansas in the Missouri River and Ending at the at the Mouth of the Wallah Wallah in the Columbia." Produced in 1846 (when the Oregon Treaty settled a boundary dispute with the U.K.) by order of the U.S. Senate, this map is from the field notes and journal of Captain John C. Fremont, and sketches and notes from his assistant Charles Preuss. There are seven sections, above is the first, easternmost section.

I like that Westport, now the place to go in Kansas City to see bands and watch drunk 20 year olds get into fights, was its own little village. Actually, it was probably a much rougher and rowdier place back then. This detailed view came from the David Rumsey Map Collection where you can see the full maps with much better clarity. 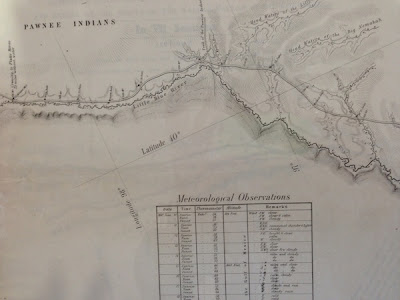 The sections feature charts of meteorological observations for sunrise, noon and sunset for each day of Fremont's expedition.These include the temperature, altitude, wind direction and brief weather descriptions such as "perfectly clear" or "occasional thunder and light." 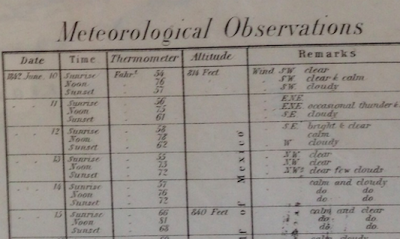 The locations of the expedition for each day are shown on the map, along with "cyphers" listing the distance from Westport. Each section has notes in the corner that provide some good atmosphere and local color. These are from section 1:


This section abounds with grass, water and fuel so that emigrants may encamp almost anywhere.
Elk and deer, the only game, are very scarce.

Selected notes from the other sections provide lessons in geography and attitudes towards non-whites.


Game - Antelope and Buffalo, the latter in innumerable bands.

Timber is extremely scarce, except on the islands*. Some driftwood and buffalo excrement makes the fuel as that of the camels does in the deserts of Arabia.

Good guard ought to be kept. Pawnees, if they do not kill, will at least take what they can from the travellers [sic] by force if they are strong enough, and by stealth if too weak to act openly.

With this section** the prairie ends, and the barren sage (artemisia) country begins.

East and West of this section [section 3] more or less buffalo and antelopes, but 50 miles from Fort Laramie each way no game is to be found. Grass - is scanty and only occures [sic] on the banks of the rivers and creeks.

At Sweetwater River*** buffalo appear for the last time and emigrants should provide themselves with well dryed meat.

West of the Green River the traveller [sic] is considered out of danger, as the Snake Indians are considered friends of the whites. Property however should be guarded.

This is the most trying section**** for the traveller on the whole route. Water, though good and plenty is difficult to reach, as the river is hemmed in by high and vertical rocks and many of the by-streams are without water in the dry season. Grass is only to be found at the marked camping places and barely sufficient to keep strong animals from starvation. Game there is none. The road is very rough by volcanic rocks detrimental to wagons and carts. In sage bushes consists the only Fuel. Lucky that by all these hardships the traveller is not harassed by the Indians, who are peacable [sic] and harmless.

*     the islands of the Platte River
**   section 2 covering the area between 98 and 102 degrees west longitude along the Platte River.
***  near the continental divide
**** section 6-along the Snake River between Fort Hall (north of Pocatello)  and Fort Boise in Idaho.

Treasures of the Newberry Library-Part1

This fall I had a chance to visit the Newberry Library in Chicago, home of the Hermon Dunlap Smith Center for the History of Cartography and one of the nation's best map collections. 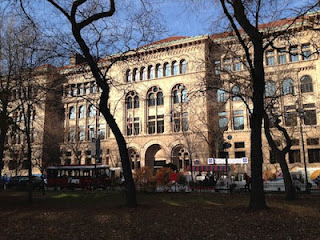 Upon entry, they direct you to a locker room for security purposes. The locker room has this nice map detailing the history of paper from its roots in China. Unfortunately I couldn't get a good picture of it without light reflecting off the glass frame.

You can look at the map catalog for a complete list of maps but that can be overwhelming if you're not looking for a specific item. Your best bet is to look through their copy of Cartographic Treasures of the Newberry Library to see some of their most significant holdings. I began with a map from Mexico, probably dating from the 1560's. I was drawn to this map for both its age and its rare, non-Western influences. 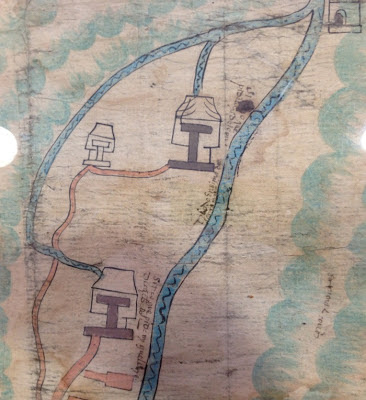 The map is encased in a huge glass frame and had to be wheeled into the room. I attempted to photograph it with my phone with mixed results-you can see the light reflecting off the glass.

The map shows mines, smelters and haciendas in Temascaltepec, a mining region southwest of Mexico City. It was printed on a traditional Mexican paper made from the maguey plant. As the previous map indicates, paper was brought to Mexico with the invasion of Cortes in 1519. Spanish and Aztec pictographs are both used. The Aztecs used horseshoes to indicate roads and spirals for rivers. Below is a poorly photographed detail of a road meeting a river. 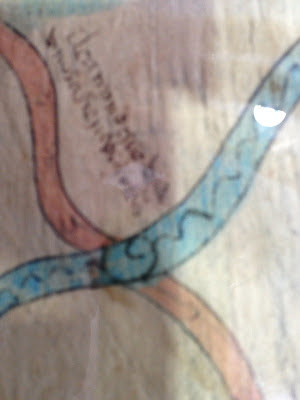 In the coming weeks I will highlight many more maps that I saw on my visit - stay tuned.
Posted by Dug at 6:57 PM 1 comments

Since 1993 Atlas Van Lines has been mapping migration patterns in the United States and Canada based on interstate moves. Here is a map of their results for 2012. Blue states and provinces have a 55% or higher net gain (of household goods) while the orange-ish color represents states that are losing goods. The assumption is that people are following their stuff. The reddish brown places are "balanced." 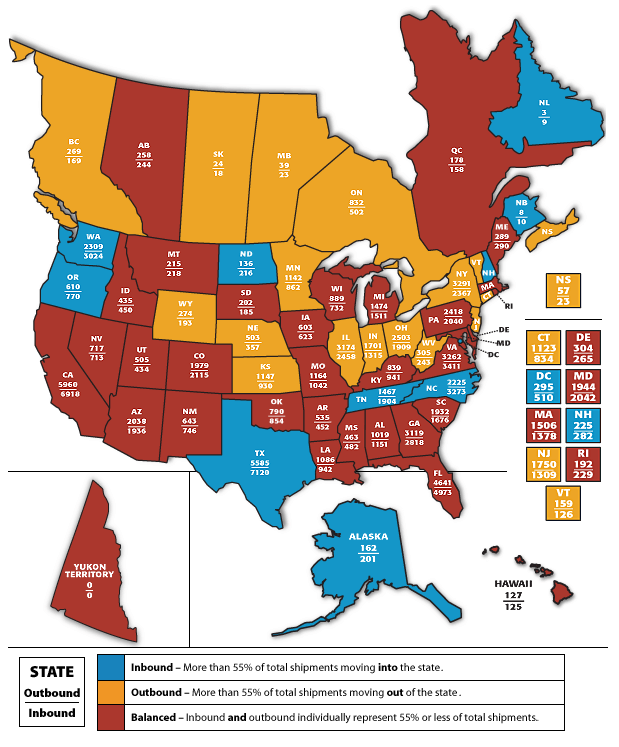 You can click on any state or province to see its ten year history. I like that Yukon Territory has a special inset map even though nobody moved in or out of there (though if you click it there has been some activity there in the past.)

If you scroll down the page you will see some summary text and you can also open up this infographic for more details.

Meanwhile over in Australia...

While we struggle through 50 degree temperatures in this not very cold January, Australia is also struggling through 50 degrees - only Celsius, in other words really, really hot.
A family friend who moved to Sydney sent this map along while complaining of 109 degree temperatures. PopSci details how the Bureau of Meteorology needed to add two new colors to the heat map. The purple blob in the middle indicates 52-54 Celsius (somewhere between 122 and 125 Fahrenheit.) 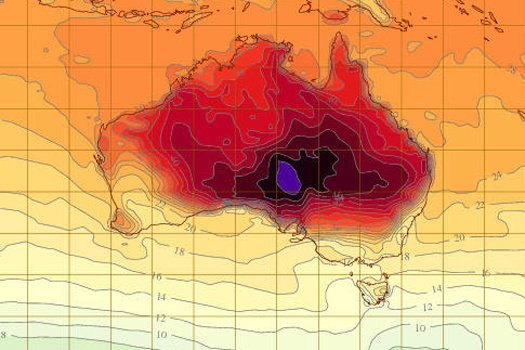 They also added a pink color for temperatures above 54, though it does not appear that they needed to use that color. The purple on this map is from one of several climate models and it was not widely expected to get that hot. The record high temperature of 50.7 was set at the Oodnadatta Airport in 1960 and there is no indication yet that record has been broken, however there is limited monitoring* in parts of central Australia. Last night a "cold" front passed through dropping temperatures back into the 30's up north and upper 20's (about 70 degrees at night) in Sydney.

*From the Sydney Morning Herald
Posted by Dug at 6:44 AM 1 comments

Mapping the Evolution of Stories

A few years ago Lapham's Quarterly mapped the evolution of four famous stories; Pygmalion, Faust, Oedipus and Leviathan. These stories all originated in the eastern Mediterranean region (modern day Turkey, Syria, and Libya), spread their way through Europe and eventually made it to the United States where they were all Hollywoodized, or otherwise Los Angelified. In each case the story has been modified but with the exception of Pygmalion, most have stayed fairly true to the format of the original. 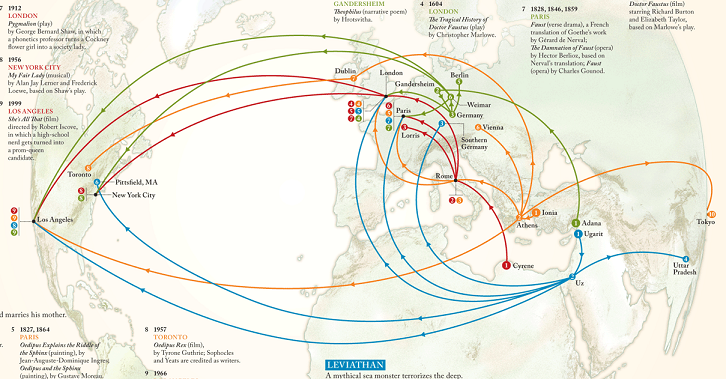 This map is big and hard to see in much detail here (a click will take you to the original) so here is a detailed view showing the origin of each story. 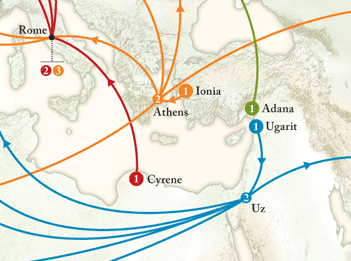 Location: Los Angeles where it all ends up for better or worse
Email ThisBlogThis!Share to TwitterShare to FacebookShare to Pinterest
Newer Posts Older Posts Home
Subscribe to: Posts (Atom)