Another set of maps from the Lori Napoleon collection Her description:
"Providence, Rhode Island.

This amazingly illustrated map was one of the many maps that were submitted to me at the Psy-Geo Provflux, held at the steelyard seen on the left. Art exhibits/installations were spread throughout the entire lot; an adobe hut, a greenhouse, many rooms and nooks inside the warehouse. The space that i was given to do my maps installation was a wonderful, musty room with exposed brick walls and a long industrial sink in the center. I affixed my collection according to different categories all around this room, and spent the entire night - (complete with numerous coffee/processed food breaks) and on to the morning, completing the installation. I became really immersed in that room and felt very at home with the freedom to create and arrange, all while the other PIPsters worked aduously on the cleaning, arranging, and painting of the exhibition spaces. the amount of work and care put into the show was incredible, and i am lucky to have been able to be a part of it, to go to Providence where this map originated from. Highlights on the map include the steel mill, some neighborhood architecture, and a very interesting public interference on college hill. " 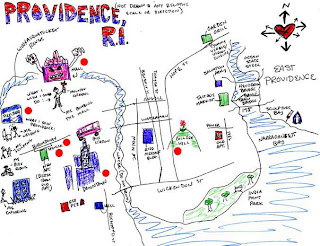 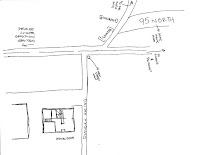 This is a ridiculously clever map showing an index of happiness in LA using 4 separate variables, each showing a facial trait representing differing levels of stress or racial makeup. These are Chernoff Faces, a visualization technique created by mathematician Herman Chernoff. The map was created in 1971 by Cal State geography professor Eugene Turner for the Los Angeles Community Analysis Bureau. 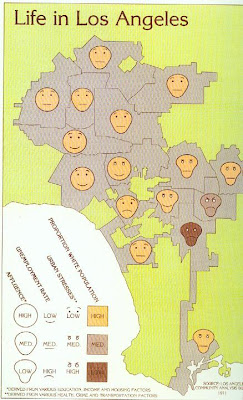 This is a map showing German settlements around Saratov (CAPATOB in cyrillic) along the Volga River in Russia.

Nine churches are identified on this double-page map titled "Monument Map" which was taken from "Treasures of the Russian land; Quarterly Journal of the All-Russian Society for the Preservation of Cultural and Historical Treasures", Artist: G I Metchenko Nr 40- (3-4/1998) [in Russian language only, out of print]. 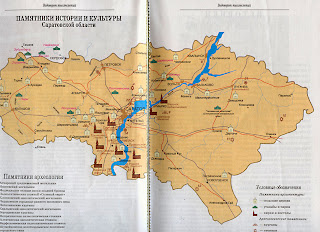 Another cool java application. Watch planes take off and land at LAX. I can sit and watch this for hours! 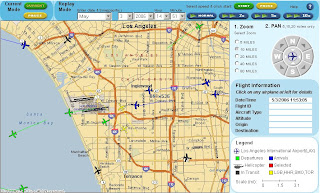 UPDATE: It appears that LAX no longer participates with Passur and some of the other airports don't seem to be loading anything. The image above now links to Newark International instead where there is still some action to watch. If nothing's happening in Newark you can try some of their other airports.
Posted by Dug at 11:11 AM