We just got back from a trip to Savannah, Georgia and saw a few interesting maps in unexpected places. This map, the first of two that I plan to spotlight, is embossed on both awnings of the new Sylvester & Co. Modern General store on Broughton Street downtown. 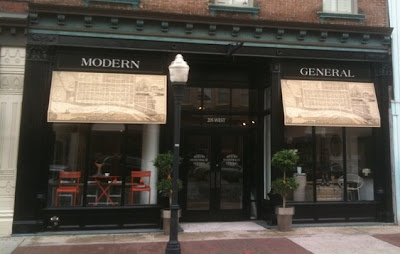 Here is a close up of one of the awnings. The black on gold is very striking and closely reflects the original map colors. 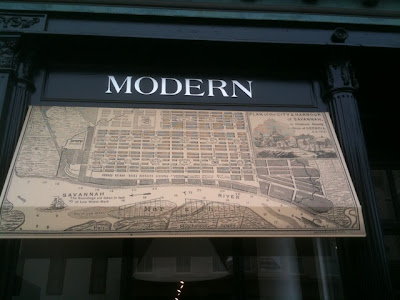 The map is titled "Plan of the City & Harbour of Savannah, in Chatham County. State of Georgia. A.D. 1818." It is from the "Report on the Social Statistics of Cities," compiled by George E. Waring, Jr., United States. Census Office, Part II, 1886. The map can be found online at the Perry-Castenada Library Map Collection at the University of Texas. Click below for a detailed view. 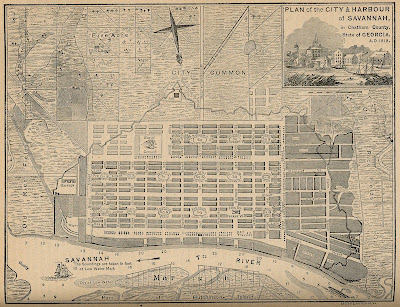 Savannah was founded in 1733 by General James Oglethorpe, who laid the city with six squares. As the city expanded more squares were added at regular intervals until there were 24. 22 of these squares still exist today in a National Historic Landmark District. These squares give the city a unique feel and charm. Major historic preservation and landscaping efforts protect the scenic and inviting character of the district.

This map, from 1818 shows the first 15 squares, with the area south of Liberty Street still undeveloped and listed as the "City Common." An empty space is cleared for Crawford Square, which sits on a "line of defense thrown up in 1814"  along the perimeter of the city.

Map 2 from Savannah will be featured in an upcoming post.