There's lot of important things going on in the world but nothing fun. Instead here's a picture sent to me by Charlie Alison from the public relations office of the University of Arkansas. It's a piece of artwork by Jason Jones that hangs in the lounge in the student union. The world's continents are rearranged to form the Arkansas Razorbacks logo. 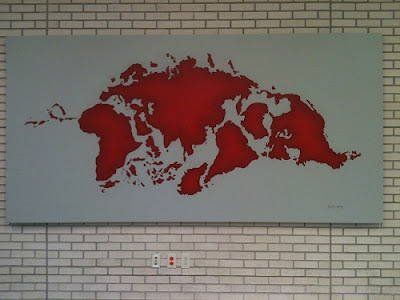 According to Wikipedia's Razorbackologists a Razorback is " an Americanism, loosely applied to any type of feral pig or wild boar in North America. The term has also appeared in Australia, to describe such animals there." Here is an actual logo for comparison.

Here's how it looks at midfield. 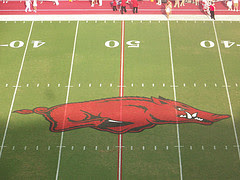 Finally, here is (was) an actual razorback - the original Tusk. Currently they are at Tusk III. 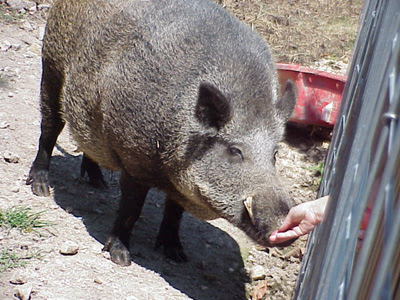 Location: University of Arkansas
Email ThisBlogThis!Share to TwitterShare to FacebookShare to Pinterest

I had to work at it a while to get the razorback to coalesce for me. Probably if you are hanging around Arkansas a lot your brain would latch onto it a little quicker.

That is so cool! I graduated from the U of A and have never seen anything like that! I have always loved maps for some reason and have always been the official map reader in my family. From that I grew into a love a travel. Check out my travel blog happyhoyt.blogspot.com Thanks!