Jerry Gretzinger began doodling a map of an imaginary town in 1963. When he got to the edge of the page, he added another and the map began to take on its own life. The map now has over 2600 panels and covers 2000 square feet. Here is panel N1/W16. 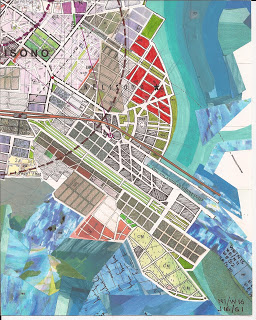 He takes a playing card from a deck with instructions that tell him what to do next. Panels are often redone and sometimes a card will tell him to place a void (a white space) over part of a panel obliterating what was underneath. Some important areas, like most of the largest city of Ukrania have walls surrounding them to protect the citizens from being wiped out by one of these voids. His blog details one of these voids that happened in January - his words appear below the image. 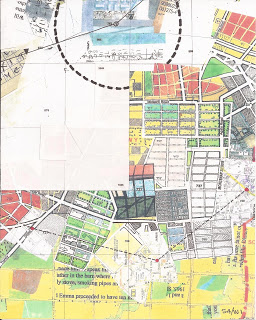 The Void Incursion which most recently hit the Polk neighborhood of Wybourne in Map Years 752 and 805 yesterday (Map Year 1045) consumed another large expanse of that city carrying off to another dimension an estimated 28,590 people. Taken, too, were over 20 commercial blocks and one rail station.

Since there is no defense wall in this area it is widely assumed that the entire West end of Wybourne will, one day, be lost to the Void.

He also began adding artistic elements like cut out images or words from magazines. For more information on his process you see see his video on vimeo.

You can see the entire map interactively. It takes a while to load and then it may take you all day to stare and marvel at it. Here is a bit I landed on showing an area called Duggan. The town is surrounded by one of those walls to protect it from being victimized by a void. 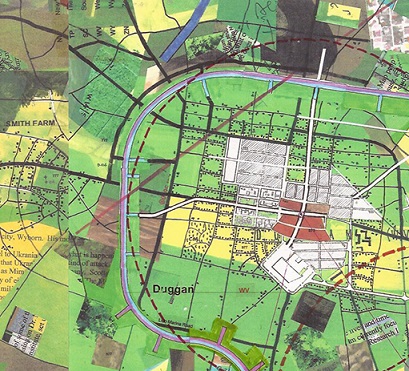 Much of the map (about 800 of the central panels) will be on display at the Brattleboro Museum in Vermont starting November 1st.

Whoa, I had seen excerpts from this before but didn't know it was so... dynamic. I'm going to have to follow this around a little bit.