Several years ago Finnish cartographer Topi Tjukanov began the Thirty Day Map Challenge and it has run every November since. The idea is to create a map every day of November based on a theme he posts at the start. These maps are posted to Twitter using the hashtag #30DayMapChallenge. There have been some wonderfully inspiring maps created in this process. I had never participated before this year, correctly assuming it would take up a major part of my time and energy.

As in other years, I had no plans to do this but on November 1st I suddenly found myself making a map and it took off from there. At the risk of being a self-indulgent show off here are the first 10 maps. As of right now I don't have an online portfolio so here is a place for me to post them. I'm hoping to continue on this challenge but time will tell if I make it to the 30-day mark. 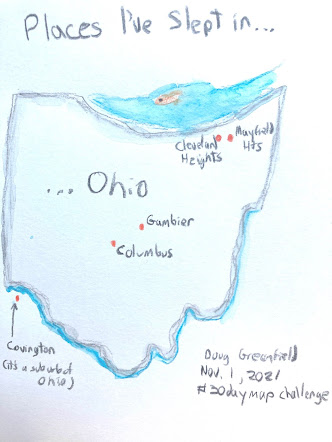 I'd been working on a general "where I've been" map and I got to thinking about places I've spent the night. I looked at a few states that either didn't seem interesting or had too many uncertainties when I settled on Ohio. I've been working on my weak artistic skills. This was drawn in watercolor pencils by hand while looking at a map of the state. 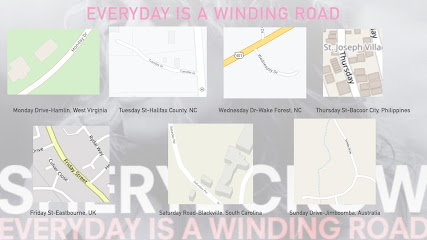 I don't really like the song "Every Day is a Winding Road" by Sheryl Crow, but somehow it got stuck in my mind and I set out prove it. I used various mapping services such as Google, Bing, Apple and OpenStreetMap to illustrate examples of streets around the world named for the days of the week. One of the tricky parts was finding streets that are in fact "winding." 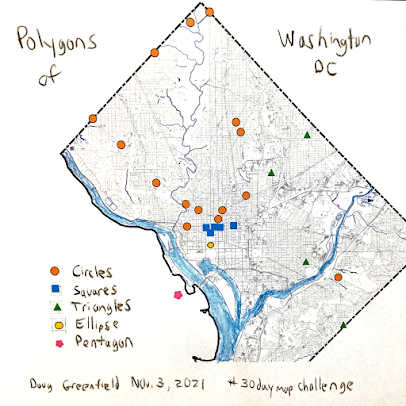 Points, lines and polygons are the main building blocks of maps so each one gets a day. DC seemed like a good polygon city. I used Opendata DC to get my points. I removed some tiny triangles and it's possible I missed a few circles and squares. There are many rectangular parks that I didn't include because they don't have "square" in their name. I almost forgot about the Ellipse!

This was a mixed media project. I made and printed a map using QGIS annotated it with pencils and put a little watercolor into the rivers. 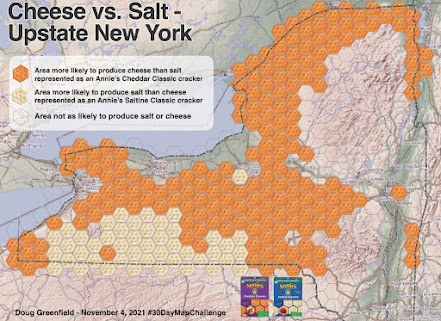 Hexagons are a popular way to represent grids these days. Studies show that certain patterns are easier to detect with a hexagon grid than a square grid. They are particularly popular with election maps but I was looking to do something a little more creative. Not many things in nature are hexagonal. Bee hives use that shape but that kind of map has been done by many others.  While looking for inspiration, I discovered that some of Annie's Snack Crackers are hex shaped, including their saltines and cheddar crackers. I decided to use them as my hexagons.

So where is a place that has both salt and cheese production? I settled on upstate New York, knowing where some of these places are located. The salt areas are mostly based on an old map I found showing salt deposits, mostly in the southwest. I also know of a couple of salt facilities from my travels so I put those in. I used the term "more likely" to cover the uncertainties but some of those hexagons in the southwest should probably be cheese. The cheese areas were determined by a combination of dairy farm maps and places I know that make cheese. 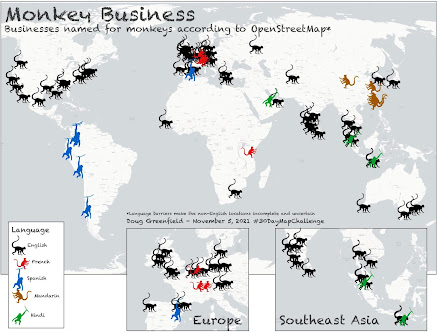 For the uninitiated, OpenStreetMap (OSM) is like Wikipedia meets Google Maps. Content is all user generated and it is freely available to use. Despite having contributed to OSM in the past, I don't have a lot of experience using the data so this was definitely a learning exercise. I knew that you can get things like businesses out of it so I tried a query on business names. For some reason, the first word that came to me was "monkey" so I grabbed all businesses with monkey in the name. After seeing an empty South America, I decided to add Spanish and then to make it a bit more objective I grabbed the other three of the world's top languages. In the process this became as much of a linguistic map as anything.

There are many translation issues here. French and Spanish have different masculine and feminine words and the Spanish words (mona, mono) are contained within many other words and names. My Hindi translation must have been especially off since all my results came from outside of India. Anyway I did what I could here. 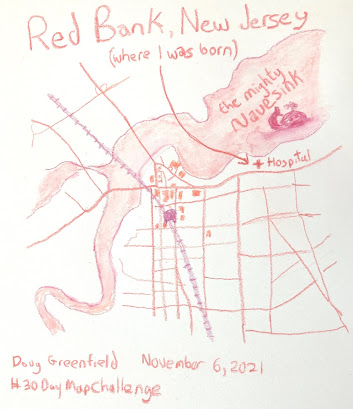 Getting personal here. This is a map of the town where I was born. I was nervously waiting my turn to perform some music on Zoom and parlayed that energy into drawing. Like #1 I tried this completely freehand, while looking at Apple Maps. I've only been through Red Bank as an adult on a train so I don't know the place at all. Someday I hope to visit. The river west of downtown is very wrong and there are other mistakes. Also the map monster and train station were poorly done.

Staying in the realm of the personal, Rittenhouse Square is around the corner from my grandmother's former building. As a child I enjoyed playing here, especially with the goat statue. I also lived in the area briefly as an adult. I'd been thinking about how the same places look in different map services so I made an animation of the square using Apple, Google, Bing, Mapbox, Carto, Esri, Stamen, Mapquest, OSM and the philly.gov web site. 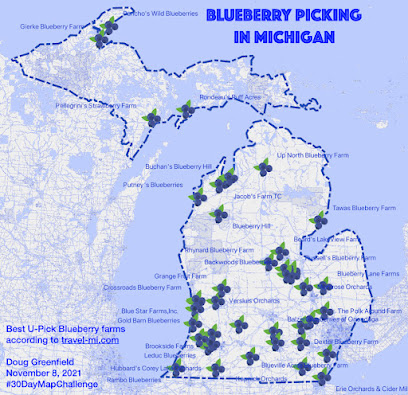 I started out trying to get a list of blueberry names using the Day 5 OSM theme but the results were not great. Next, I tried using the Google Maps API but also had issues with that. Finally, I found an embedded Google Map from travel-mi.com. I wasn't planning on a Michigan focus but because the data set was there I went with it. I already had a blueberry symbol from my What They Drop on New Years Eve map so I was good to go! 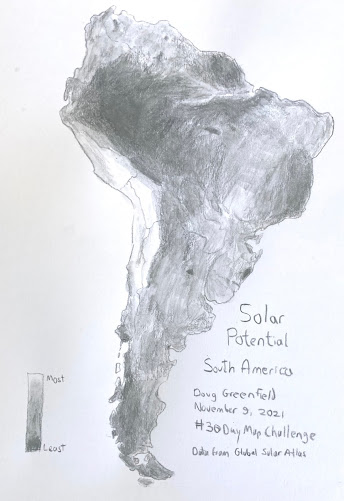 I thought one of those solar potential maps would look good in monochrome but I'm not sure it works. I also thought that light should be more sun but usually darker means more so this ends up being a bit counterintuitive. I also was not really able to get the subtle gradations of grays with a watercolor pencil. I probably should have tried charcoal instead. I don't trust my drawing abilities to do a complicated outline like this freehand. I traced it right off the computer screen. The rest was done freehand, making it "charmingly inaccurate".

I made a very low resolution version of a satellite image of Australia. Then I made a fuzzy version. I couldn't decide which I liked better so I made an animation: blocky vs fuzzy

Though this challenge has taken up way too much of my time and thinking process, it has also been a creative inspiration and a great learning experience so far. I'm looking forward to some of the upcoming challenges with a touch of dread but also excited to take them on.