Under a Black Cloud! 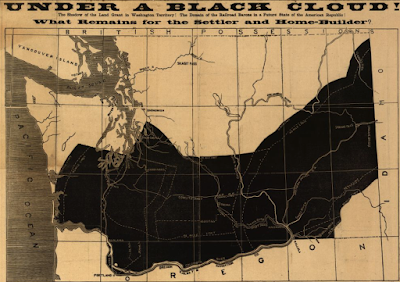 This map is part of a paper addressed to the Republican National Convention of 1884. The purpose was to complain about the Northern Pacific Railroad holding title to "unearned" lands. These lands were granted to the railroad company for the purpose of constructing rail and telegraph links from Lake Superior to Puget Sound. The grants were made in 1869-70. By this date (1883) the company had only built a few small trunk lines, possibly just to keep their hold on the land in black above.

These lands were unavailable to homesteaders as long as the railroad held them. The company was accused of using stealth tactics to hang onto huge amounts of valuable coal and timber lands.


"The head of every true American should hang in shame that hair-splitting Congressmen have been found who, regardless of the duties of their office, have, at the command of their corporation masters, supported this contention by their arguments, their votes and their obstructive tactics."

The paper seeks a clear position of the party. "They do not want meaningless phrases or equivocal expressions, but earnest, honest words and work." 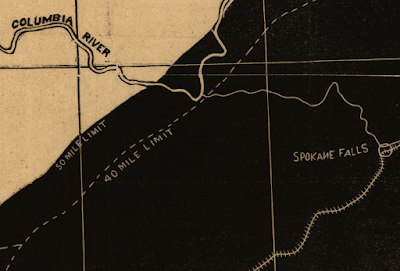 The map shows 40 and 50-mile limits from the proposed main and trunk lines in black as land unavailable to the public-"the crooked, tortuous and angular course of the railroad lines being only parallel by conduct of the Company itself."
Here is the edge of the "black cloud." 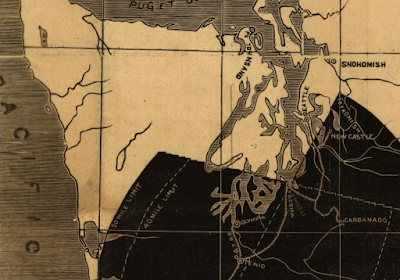 Map Of The World said...

My blog is also on all cities and maps. Would you visit, please? Thank you
mapguide2016.blogspot.com

Seems like the North and Northeast quadrants of My Fair City is also under a black cloud. But then, that's normal in December.